Amateur bakers are raving about a simple recipe for ‘Mars Bar Rice Crispy Cake’ that can be made from five supermarket ingredients in a slow cooker.

The dessert has sparked delighted responses since it was shared in an Australian cookery group on Facebook, with home cooks branding it ‘amazing’ and ‘a cake worth making’.

It contains butter, golden syrup, milk chocolate, Rice Bubbles cereal and Mars bars, all melted and mixed in a slow cooker which costs $19 at Kmart.

The cake – which is easy enough to perfect for bakers of all skill levels, even beginners – takes just minutes to prepare, but should be left to set in the fridge for up to three hours before eating. 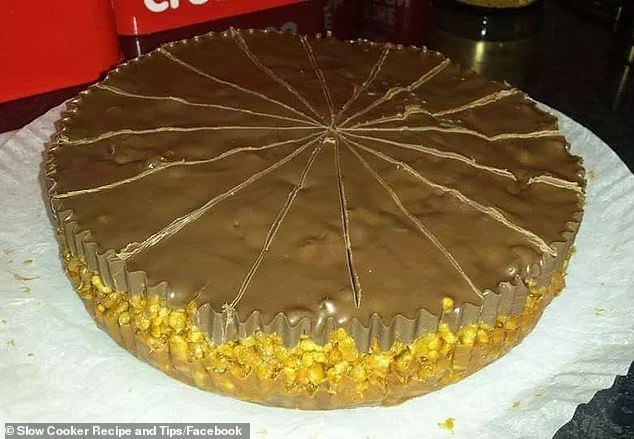 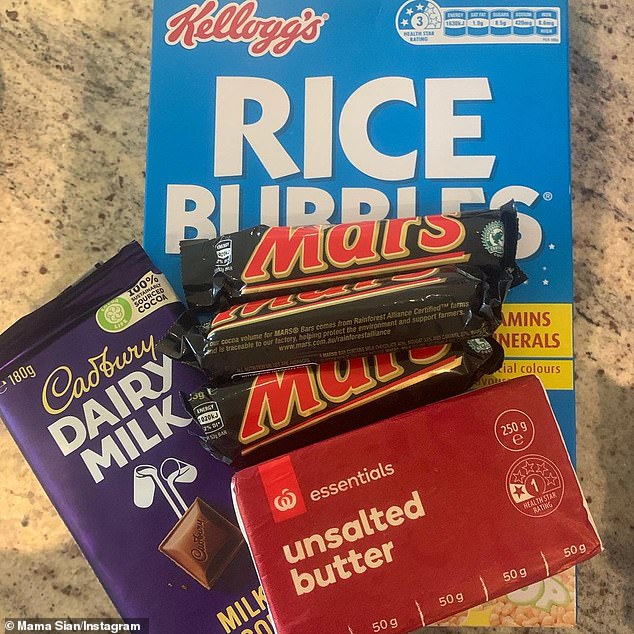 It contains butter, golden syrup, milk chocolate, Rice Bubbles cereal and Mars bars, all melted and mixed in a slow cooker which costs $19 at Kmart

The cake can be made by melting 12 Mars bars with 100 grams of butter and eight tablespoons of golden syrup in a slow cooker.

Once the mixture has formed a thick, smooth consistency, add eight cups of Rice Bubbles and stir to combine, taking care to coat every piece of cereal in chocolate syrup.

Then scoop the mixture into a large cake or tart tin, lined with grease-proof baking paper for ease of lifting out.

In a separate bowl, melt 600 grams of Cadbury milk chocolate, then pour over the Rice Bubble mixture. Allow it to cool before leaving in the fridge for 30 minutes. 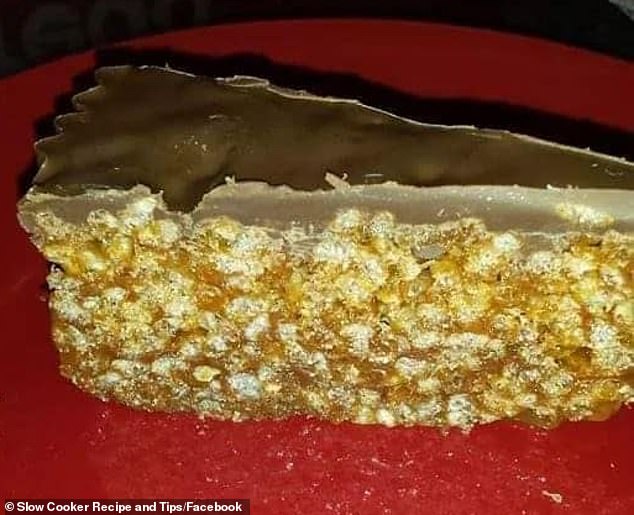 Once the cake has started to set, take a palette knife and gently mark out slices in the top of chocolate – this prevents the top from cracking when cut.

The cake, which is best left for two to three hours before being sliced into pieces, should have a rich body of caramelised cereal topped with a thick layer of chocolate.

It’s the latest in a string of simple treats to take social media by storm, following foolproof recipes for banana bread and pavlova brownies.

1. Melt Mars bars, margarine and golden syrup together in a slow cooker.

3. Scoop mixture into a large cake or tart tin.

4. Melt milk chocolate separately and pour over the Rice Bubble mixture. Leave to cool, then put in the fridge for 30 minutes.

5. After 30 minutes, when the cake starts to set, mark out slices in the top of the chocolate with a knife. This prevents chocolate from cracking when you cut it.

6. Leave to set for two to three hours. Remove from the fridge and leave to stand for a few minutes before slicing.

Dessert lovers were left drooling over the air-fried brownies, made from a thick layer of meringue stacked over a chocolate fudge base.

Photos of the treats have drawn dozens of passionate responses since they were uploaded on Facebook late Sunday night, with many describing them as a ‘perfect fusion’ of their two favourite desserts.

The brownies are made with three egg whites, two cups of sugar, one teaspoon of vinegar and salted caramel flavouring and a box of ready-mixed fudge brownie from Green’s or Betty Crocker.

The mixture should be cooked in Kmart’s new three-in-one air fryer oven, which is sold online and in stores across Australia for $129. 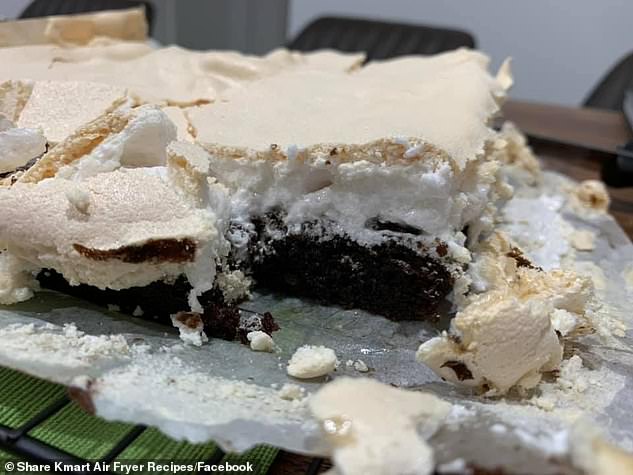 The pavlova topping is made by beating egg whites until light and fluffy, then mixing in sugar until stiff peaks form.

Next, the vinegar and salted caramel are folded in, taking care not to beat vigorously as this knocks air from the mixture which prevents it from rising.

Once the pavlova batter is ready, set to one side and air fry the brownie batter – mixed per packet instructions – for 20 minutes at 170 degrees Celsius.

The pavlova can then be loaded on top and fried for a further 20 minutes at 160 degrees Celsius – it’s that simple.

Bakers have been praising the clever combination in the comments section, with one woman christening the invention ‘pavlownies’ – a mash-up of pavlova and brownies. 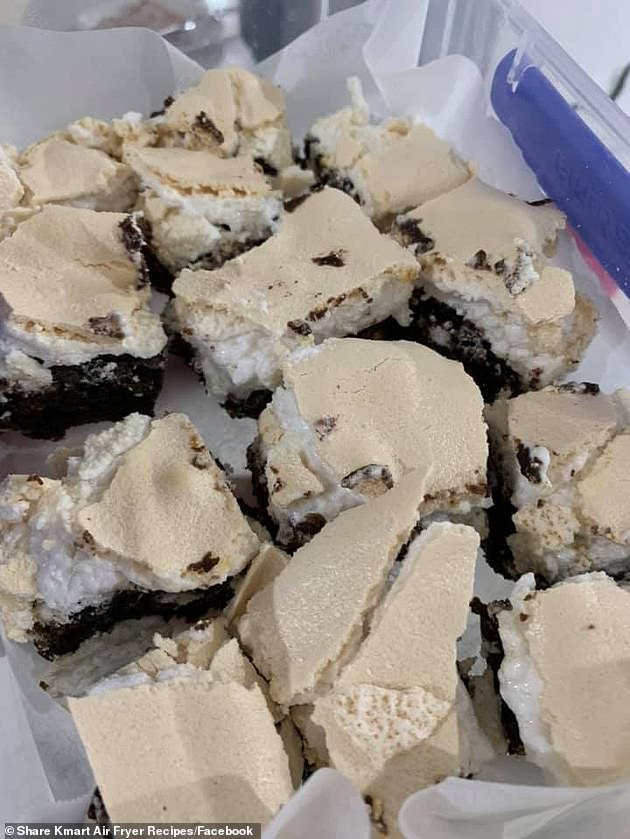 ‘That looks great. I did this for my son’s 21st topped with ganache and strawberries,’ one woman said.

‘For his 18th I teamed up with my mum and made a layer of ice cream cake with fudge swirl as well as the brownie and pav.’