An apparent bomb threat that prompted National Australia Bank to close hundreds of branches across the country has been deemed a hoax.

The bank evacuated and closed all of its branches, business banking centres and commercial sites on Wednesday over a ‘physical security threat’.

They will reopen on Thursday, with authorities ruling there was no danger.

‘The latest advice from state and federal police is that the threat is not credible and has been deemed a hoax,’ NAB said in a statement on Wednesday evening.

‘As a result, we are pleased to advise that it is now safe to return to all NAB locations from tomorrow morning.’

NAB closed all Australian branches on Wednesday over a physical security threat. Pictured: police chat with customers outside a store in Merrylands

The security scare is understood to be a bomb threat, although neither NAB, the Australian Federal Police or Queensland Police would confirm.

The lender has more than 600 branches across Australia and acknowledged the disruption had been an inconvenience for customers and staff.

But NAB made no apology for the shutdown.

‘Their safety and security is our absolute priority and that is why we took the action we did,’ it said.

‘We did so with the information that we had at the time.’

NAB’s digital banking services were unaffected by the mass nationwide closure of bricks and mortar sites.

In a statement, the AFP urged the public to contact police if they receive a bomb threat.

A Queensland Police spokesman said several bomb threats had been made to branches across the state.

‘It is not clear whether those threats were made by phone or email,’ the spokesman said.

ATM machines inside of branches were also disabled. 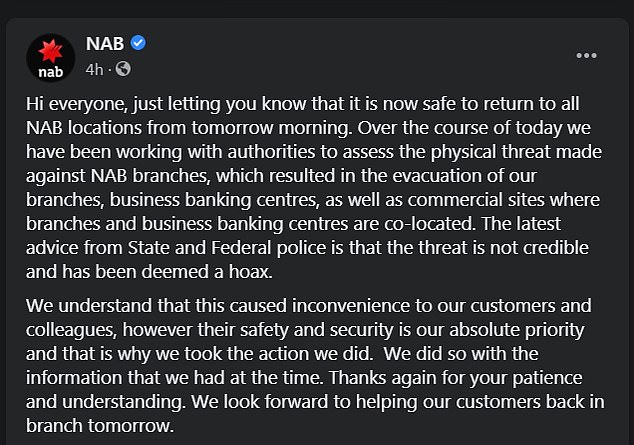 A customer told 2GB he was ‘abruptly booted out’ of an NAB bank branch in Revesby, western Sydney.

Another man, who was at the North Sydney branch, told Sydney Morning Herald an announcement was heard across the bank.

‘This is not a drill please evacuate the building and head to the evacuation point,’ the announcement said.

A 3AW Melbourne caller said staff and customers were all suddenly rushed out of the branch she was in.

Many praised the actions of the bank for taking staff safety so seriously.

‘Glad you are thinking of your staff first. Well done NAB,’ one person said.

Another said: ‘It is good to see staff safety is important. Hope the threat is isolated and dealt with.’

Others were glad they saw the message before they headed to the bank on Wednesday afternoon.

Many were concerned they wouldn’t see their wage deposited into their account, but were reassured this would not be the case. 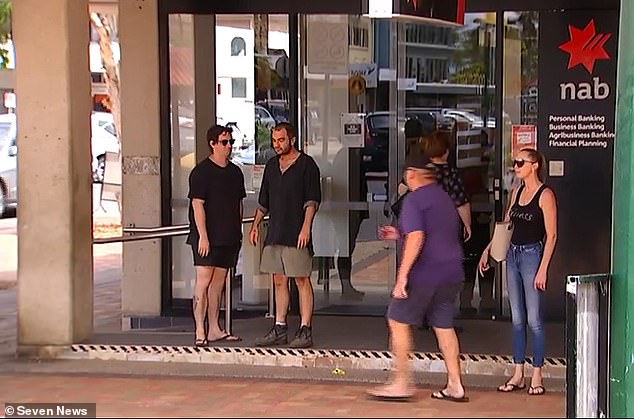