Victoria’s health secretary has resigned after the failure of the hotel quarantine program to contain coronavirus.

When questioned at the inquiry, Ms Peake refused to accept deficiencies in the hotel quarantine program stemmed from failures in her department, but expressed ‘profound regret’ over its inability to prevent the state’s devastating second wave of Covid-19. 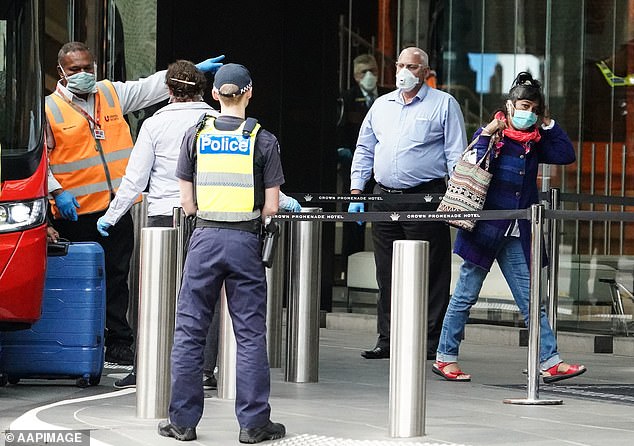 Her decision to quit comes ahead of the inquiry, headed by former judge Jennifer Coate, handing down its final report by December 21.

The Victorian government announced her resignation on Thursday afternoon, saying she had stepped down to pursue ‘other opportunities’.

There was some more upbeat news for Premier Daniel Andrews and his government, however, as a new poll revealed a post-lockdown surge in public approval.

The Roy Morgan survey, conducted on Monday and Tuesday, found Labor’s primary vote rose to 45 per cent, up five points, after the end of Victoria’s near four-month lockdown.

About 71 per cent of those polled approved of Mr Andrews’ leadership, up 12 per cent, with many respondents praising his handling of the pandemic.

It came as Mr Andrews expressed doubt the state will fast-forward its timetable for more easing of restrictions, warning 13 coronavirus clear days is no coronavirus vaccine.

Victoria has not had such a streak without new cases or deaths since February and the state’s rolling case average is now 0.1.

After Melbourne’s 25km travel limit and the ‘ring of steel’ ended at the start of this week, Mr Andrews flagged November 22 as the next date for restrictions to ease.

That is set to feature 10 visitors per home and limits in indoor hospitality increasing to 100 people.

Despite the healthy numbers, Mr Andrews won’t budge early, but indicated November 22 could also feature an announcement about workers returning to offices.

Meanwhile, a central Melbourne arcade has been transformed into an immersive public art gallery.

The Lonsdale St ‘artcade’ features some of Australia’s leading contemporary artists and will open to visitors on Friday.

Victoria’s virus death toll remains at 819 and the national figure is 907.