A Western Sydney dad is showing thousands of Australians that you don’t need to spend hundreds of dollars to feed your family.

Nathan Lyons, 35, regularly feeds his wife and six children for just $8 per meal, and now he has amassed more than 60,000 followers on TikTok, where thousands tune in to see his budget recipes.

‘I’ve always been a budget shopper as my mum was a single mum of four in housing commission and money was tight growing up,’ Nathan told FEMAIL.

‘We always bought home brand items and learned to appreciate the good stuff when we got it.’ 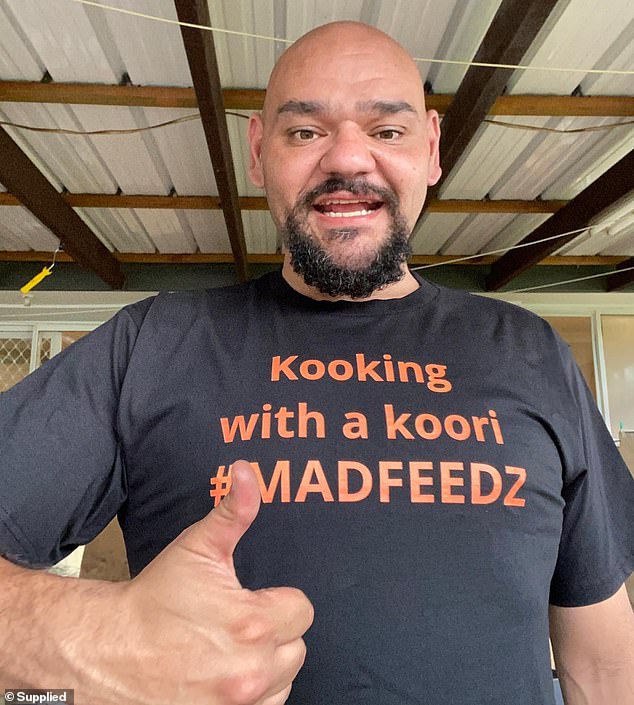 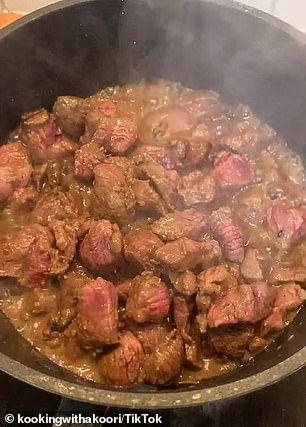 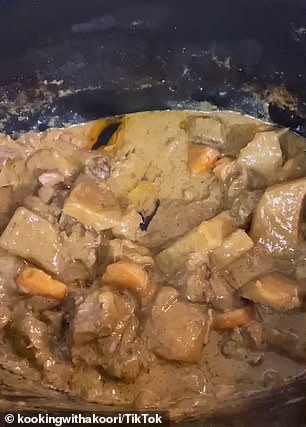 Nathan Lyons, 35, regularly feeds his wife and six children for just $8 per meal, and now he has amassed more than 60,000 followers on TikTok, where thousands tune in to see his recipes (his slow-cooked kangaroo curry pictured)

Some of the dishes Nathan has become known for on TikTok include his ‘devon snack pack’, which comprises devon, sauce and cheese, and slow-cooked kangaroo curry.

He also makes meals like Mi Goreng steak noodles, baked chicken wings and ‘quick easy tuna noodles’ – all of which are put together on a shoestring budget.

‘I think the best way to keep meals cheap is to bargain shop and kind of have an idea of what you want to achieve when you cook,’ Nathan told Daily Mail Australia.

‘Like looking for the markdowns and the yellow sticker specials from Woolies.’

He added: ‘I’ve learned that the roast chooks at Coles generally get reduced to around $4 at 9pm and the stickers go on around 4pm.

‘It’s all about shopping smarter. A 750 gram packet of pasta only costs $2 and a jar of sauce is $3. That can feed a family with some veggies.’

Nathan said he only started his TikTok page in September, and it ‘blows his mind’ that he already has 60,000 people following him. 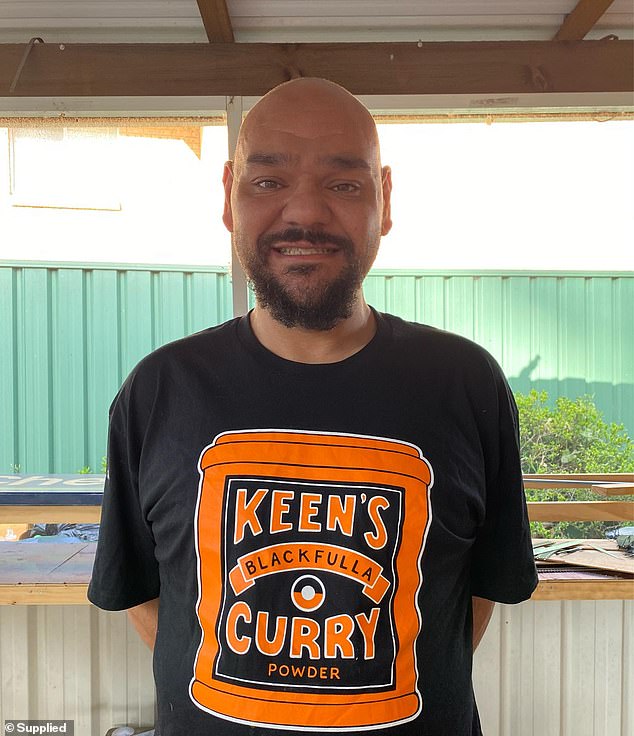 ‘I think the best way to keep meals cheap is to bargain shop and kind of have an idea of what you want to achieve when you cook,’ Nathan (pictured) told Daily Mail Australia 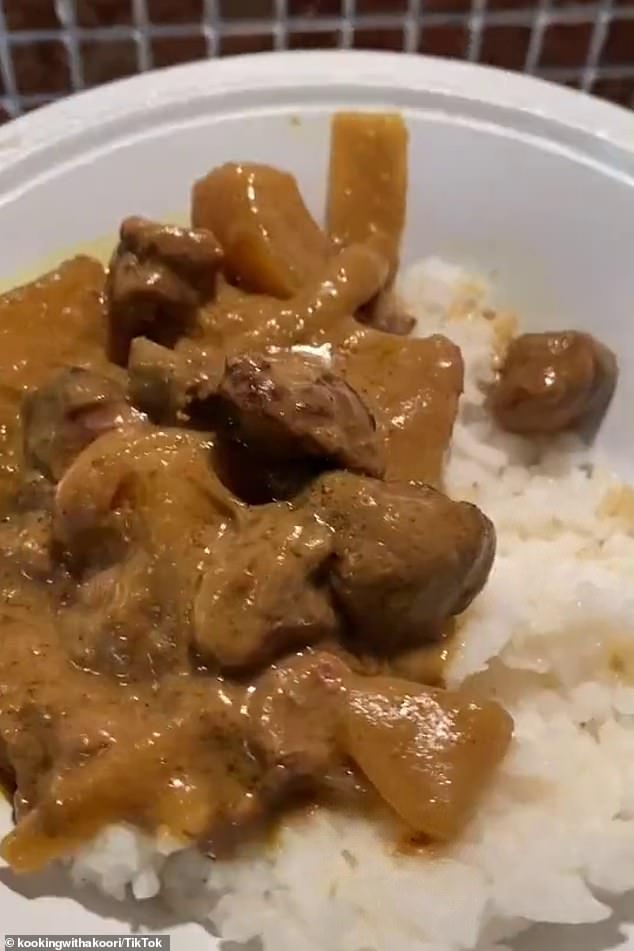 Nathan said if you know when to look out for markdowns in the supermarket, you can score great deals (his curry pictured)

Nathan said his most popular dish is the slow-cooked kangaroo curry, which he uploaded to his TikTok page earlier this month:

‘What I aim for is to make meals that’ll bring back the good memories when with the mob,’ Nathan said.

‘Some of the music I add is deliberately put in to aid that.’

The 35-year-old also uses garlic salt, paprika, ginger, a drizzle of soy sauce and flour to make a delicious sauce.

After the kangaroo meat and vegetables are cooked in separate pans, Nathan then mixes everything together and cooks it in his slow cooker until the meat is tender.

‘Keep up the good work my friend, I love your TikTok cooking videos,’ one commenter posted underneath the video. 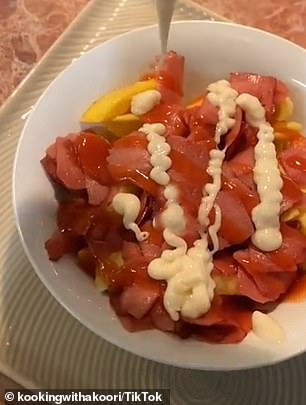 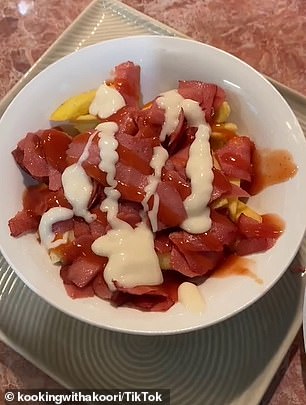 Some of the dishes Nathan has become known for on TikTok include his ‘devon snack pack’ (pictured), which comprises devon, sauce and cheese

What are Nathan’s budget shopping secrets? 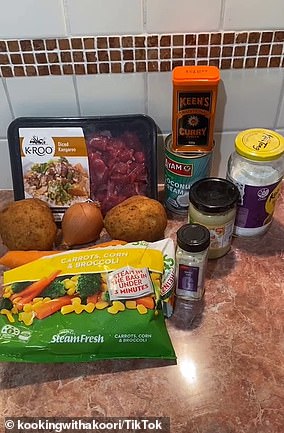 * Always look for home brand items where possible, which are often just as good.

* Bargain shop and have an idea of what you want to cook when you go shopping.

* Look for markdowns and yellow sticker specials from Woolworths.

* Know when products like the roast chickens are marked down at Coles. For Nathan, it happens around 4pm.

* Get creative and realise you don’t have to spend a lot to make good meals. A packet of pasta, sauce and veggies is cheap and works well for instance. 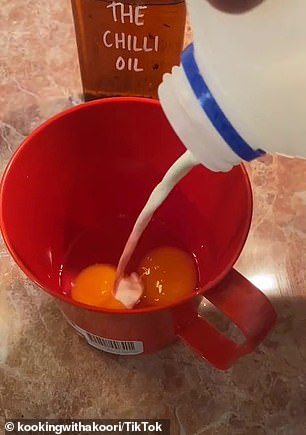 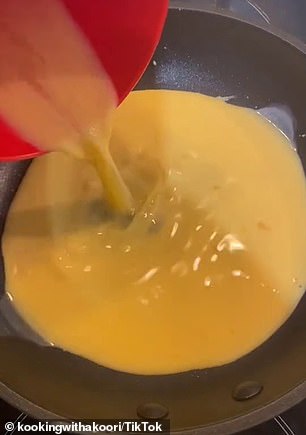 The dad regularly makes scrambled eggs with chilli oil for his family (pictured), and his simple cooking videos have taken off on the video platform

Nathan said he is somewhat surprised his cooking videos have taken off as quickly as they have, but he is happy that he is bringing joy and cooking to other people’s lives.

‘There’s so much negative stuff on social media and in the world in general,’ he said.

‘I I just want to bring joy to people and make them smile.’

He also thinks people respond well to his videos, because they are not as perfectly curated as other food blogger’s clips online.

‘I’m using a dash of this and a dash of that,’ he said. ‘It doesn’t look great, but it tastes amazing.’

To find out more about Nathan Lyons, who goes by Kooking with a Koori online, please click here.