BOOK OF THE WEEK

During the early summer of 1941, one of Stalin’s commissars wrote to the Soviet leader warning him that ‘a source’ had told him German planes were on stand-by to attack Russia, b­ringing the non-­aggression pact with the Nazi regime to a sudden and violent end.

Stalin not only refused to believe the information but was furious at the very suggestion that his precious agreement with Hitler would not hold. In reply, he scrawled across the note: ‘Tell your “source” that he can go f*** his mother.’ Five days later, Hitler’s armies crossed the border and Operation Barbarossa, intended to wipe out the Soviet Union, was under way.

From this we learn two things. First, that Stalin was the one duped by Hitler into agreeing (two years earlier) to the unlikely peace deal between the two rival superpowers, despite the ideological chasm between them. Stalin thought it would last; Hitler never had any such intention. Even as ­Operation Barbarossa was happening, Stalin was slow off the mark and refused to believe he had been tricked. 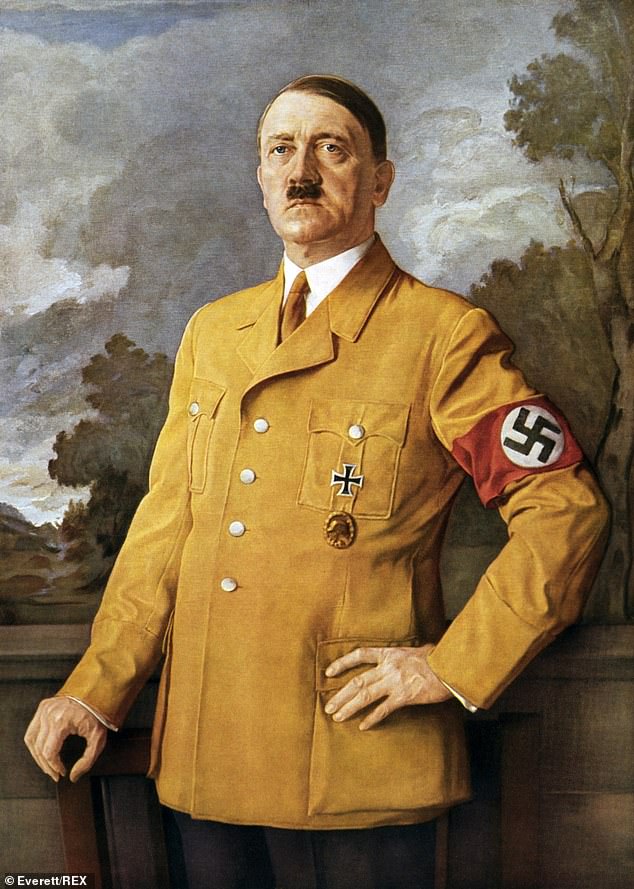 Hitler (pictured) established a cult of personality in which he was the godhead, to be trusted, adored and, above all, obeyed

The second thing we learn is about the very different personas of the two leaders. Because, according to prominent historian Laurence Rees in his latest book, such crudity as Stalin wrote would not have come out of the mouth of Hitler.

‘Hitler’s sense of his own special status would have prevented him from using the language of the street,’ writes Rees, just one of the many gems in this impressive book comparing the dictators, whose extreme brutality scarred the 20th century.

By contrast, the foulmouthed Stalin was uncouth and hard-drinking, with discoloured teeth and an unkempt moustache.

Manners apart, the two men had much in common: indifference to suffering, certainty of purpose, loneliness (neither had an intimate confidante) and a hatred of Christianity. Each believed, writes Rees, that he and he alone had uncovered the secret of existence.

Both condemned free speech and attacked human rights. Both managed to convince their millions of deludedad-herents that they were infallible. Above all, both were entirely without mercy in pursuit of their very different ideological goals — in Stalin’s case a class-free C­ommunist nirvana, in Hitler’s a racially pure world.

Both believed that reaching those goals justified the most appalling suffering. 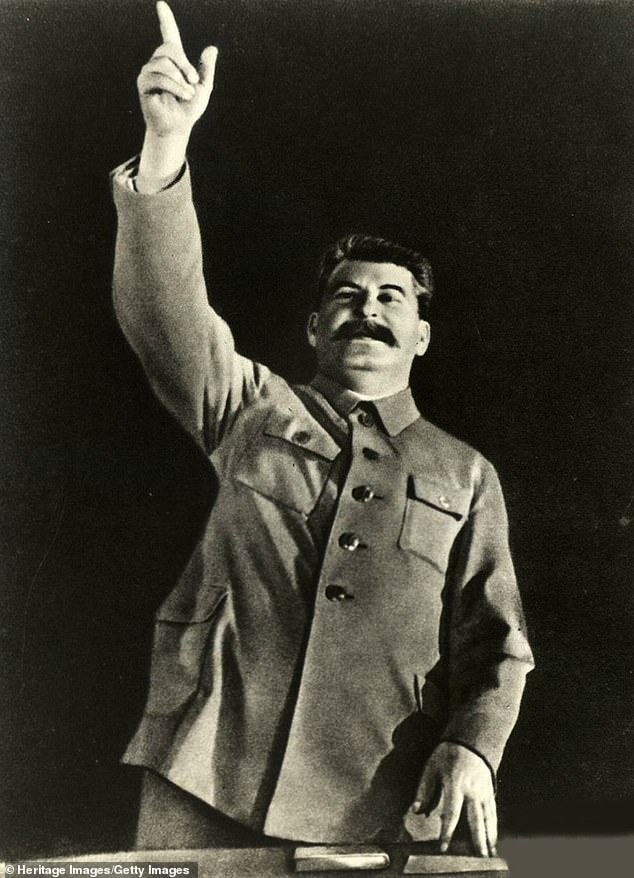 Stalin (pictured), by contrast, was  a strong, silent type, letting others talk while he took in what they were saying

Thus, in September 1941, in a ravine outside Kiev, 33,000 Jews were forced by their Nazi captors to strip naked and lie on the corpses of those who had gone before them, to be dispatched with bullets. The horror was unimaginable, yet Babi Yar was just the start. The conveyor-belt killing of the extermination camps followed in the years ahead, the thousands turning into millions — all Hitler’s handiwork.

As for Stalin, among those on whom he took out his spite were the Kalmyks, an ancient Mongol people from the Russian steppes, the entire population of whom were hunted down in 1943 and deported, in unheated cattle trucks, to the Siberian wastelands. Tens of thousands died.

Both tyrants were monsters, yet their personalities and the way they operated were as different as chalk and cheese. Hitler was a man of vision — though the vision was a warped one: Deutschland uber alles, whatever the cost in human (or, as he as saw it, sub-human) lives.

He had a charismatic effect on people. ‘Everything came from the heart,’ recalled one of his dedicated henchmen, Hans Frank. ‘I was convinced he alone was capable of mastering Germany’s fate, through courage, faith, readiness for action and devotion to a great, shining common goal.’

Opponents thought his voice ‘scratchy’, his delivery shouty and his political ideas simplistic. But the masses he preached to were looking for a saviour and could only hear his self-belief — the commodity that a Germany still reeling in the 1930s from the defeat of 1918 and reduced to an economic basket case desperately needed.

Hitler not only fitted the bill but built on it, establishing a cult of personality in which he was the godhead, to be trusted, adored and, above all, obeyed. 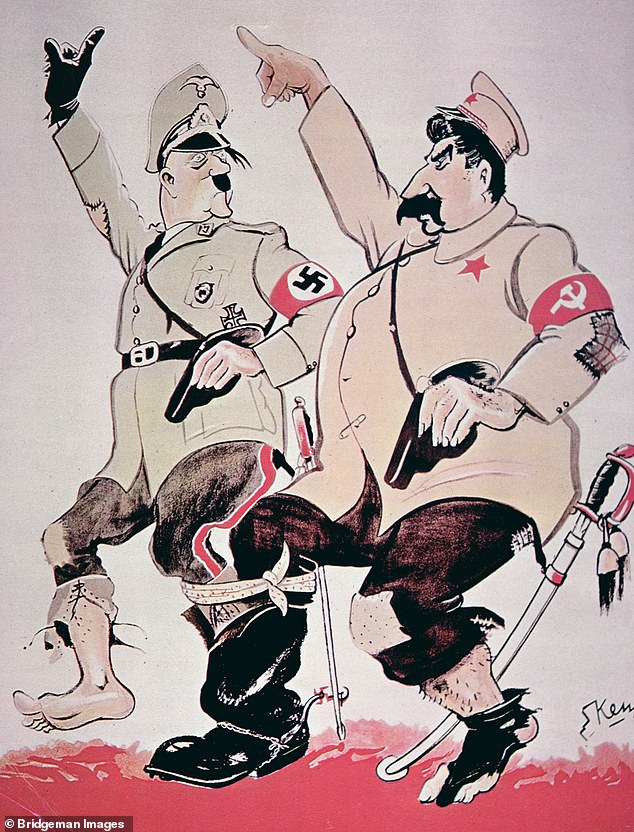 As the Wall Street Journal pithily put it at the time: ‘The principal difference between Mr Hitler and Mr Stalin is the size of their respective moustaches’

He, the Fuhrer, dictated rather than discussed. That was his unique style.

‘At crucial moments, he merely announced to his underlings what he had decided and then relied on his lack of selfdoubt and considerable powers of persuasion, allied to the authority of his office, to push through what he wanted.’

Stalin, by contrast, was a charisma-free zone. No orator, he wielded power through the all-powerful communist party, with its endless committees that he bent to his will. He was a strong, silent type, letting others talk while he took in what they were saying.

He was, according to Rees, ‘an aggressive listener and an even more aggressive watcher’, his eyes boring into those around him, probing for their weaknesses and, most of all, any hint of disloyalty. When Stalin did speak, he kept his voice low, leaving those listening at a disadvantage as they strained to catch his drift.

No one dared contradict his decisions for fear of the brutal consequences — denouncement, disgrace, death. His paranoia was constant — unlike Hitler, who tended to trust those closest to him until they proved otherwise.

For Stalin, proof was not necessary; suspicion was enough. He was once heard to say that every time he walked down the corridors of the Kremlin, he was wondering which of the armed guards lining his route would be the one to gun him down, and whether he would be shot in the front or the back. 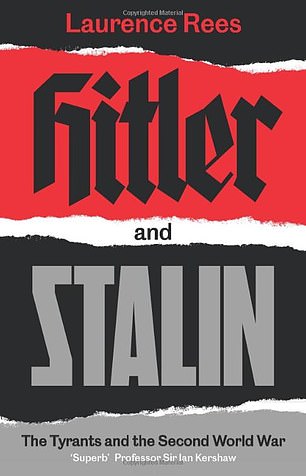 Yet from these two very different individuals came horrifyingly similar crimes against humanity that leave the imagination gasping. It’s a fool’s errand to try to judge the moral balance between them, but it’s hard to resist having a stab.

Take the numbers. Rees calculates that at least 13million deaths can be laid at Stalin’s door — those who died from ethnic cleansing or deliberate famine in places such as the Ukraine, or as political prisoners in the gulag, or simply shot in the purges.

Rees’s equivalent figure for Hitler’s regime is much higher — 20million deaths, of which the six million Jews who died in the Holocaust are well known but to which should be added huge swathes of captured Soviet s­oldiers and overrun civilians who were left to perish.

It’s in Stalin’s favour, too, that the extermination factories of Auschwitz and Treblinka, designed to erase an entire group of people, had no parallel in the Soviet Union — although Stalin’s crimes went on for longer, disguised by victory in World War II.

The way of the world is that the winner not only takes all, but gets to control the history. The result is that, though Hitler is unequivocally consigned to the darkness, Stalin, writes Rees, has largely escaped the full level of censure he deserves.

So much so that he is still revered in 21st-century Russia. One opinion poll there showed 70 per cent approval for him and another declared him the most outstanding figure in world history.

So, was one of the tyrants worse than the other?

It’s a false dichotomy even to ask, as Pavel Stenkin, a Soviet PoW who was imprisoned in Auschwitz but managed to escape, knew only too well. On his return to Russia he was accused of being a spy and sent to a labour camp. Having been starved in a German camp, he found himself permanently hungry in a Soviet one.

‘Fascism and Communism,’ he decided, ‘were the same. I know this better than anyone.’

As the Wall Street Journal pithily put it at the time: ‘The principal difference between Mr Hitler and Mr Stalin is the size of their respective moustaches.’