A husband has shot his wife after she dropped their children at school before turning the gun on himself in a murder-suicide, detectives in Ohio say.

Brian Colbert, 39, pulled a gun on wife Sarah, 34, in front of Sarah’s mother on State Route 132 in Washington Township at around 8.30am on Tuesday.

Sarah’s mother had called 911 to report gunfire, according to Local 12.

The grandmother reported that Sarah was in her car after leaving the children at school when Brian appeared in his pick-up truck behind her. 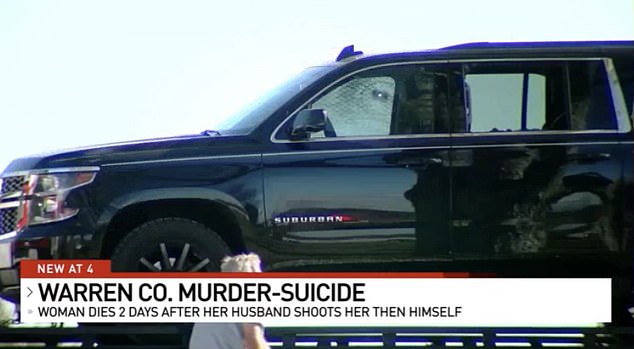 Sarah Colbert, 34, was shot in her car by husband Brian Colbert, 39, after dropping their children at school in Washington Township, Ohio (pictured: a bullet hole is seen through the driver’s side window of a Chevrolet suburban at the scene)

Brian approached the car window and Sarah’s mother said she heard a shot. She told the operator that there was another shot and Brian was on the ground.

Sarah’s mother, who was not named, told 911 she was too scared to look at her daughter and did not know whether she was dead or alive.

‘She’s in the car. I don’t know if she’s alive or dead,’ Sarah’s mother told the operator according to The Journal News. ‘I can’t go out there and look.’

She told 911 that the couple had been having marriage problems and that Brian had looked towards the home before firing more shots.

Sarah was discovered inside the car, while Brian was dead on the ground outside the vehicle.

At 9am a helicopter was requested and Sarah was airlifted to Miami Valley Hospital in Dayton where she died of her injuries on Thursday. 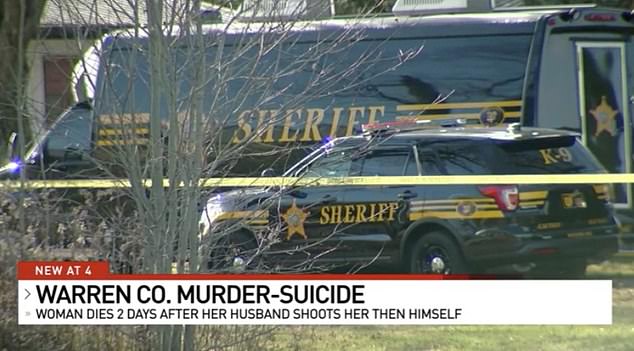 Police officers at the scene in Warren County on Tuesday morning. Brian Colbert was found dead at the scene, while his wife died two days later in hospital

Warren County Children’s Services had been involved in a ‘domestic situation,’ investigators said.

‘This incident stemmed from a domestic situation between Sarah and her husband Brian Colbert,’ the sheriff’s office said.

‘Mr. Colbert had a self-inflicted gunshot wound and was pronounced deceased at the scene.’