A lady was been left baffled after stumbling across a very unusual looking creature on a popular beach.

Catherine Nguyen was staying at Tangalooma Resort, on Queensland‘s picturesque Moreton Island, with family and friends and didn’t know what to think when she saw a bloated fish-like animal washed up on the sand.

She had no luck when she reached out to the local eco centre but experts from the Queensland Museum solved her conundrum, quickly confirming the identity of the mysterious sea creature. 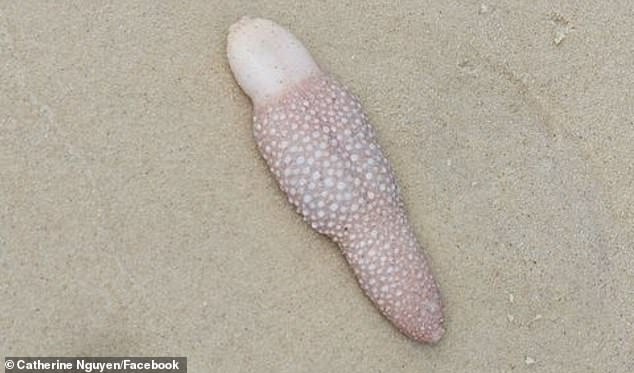 Wayne Douglas went a step further, cheekily asking ‘where do the batteries go’

ABC Brisbane posted Ms Nguyen’s unusual find on their Facebook page on Thursday night, and it didn’t take long for people to comment in droves.

One person said the sea pen looked ‘more like a mermaid’s tongue to me’ with another cheekily asking ‘where do the batteries go’.

A third suggested renaming the creature ‘sea sausage’, with a fourth person commenting that it was (US President Donald) ‘Trump’s Tongue.’

And in case you were wondering, picking one up for a closer examination isn’t recommended – they have eight stinging tentacles which they use to protect themselves and capture food.

Rhonda Newton Jacques showed her dark humour, stating the large sea pen reminded her of the tongue of US President Donald Trump

SEA PENS: WHAT YOU NEED TO KNOW ABOUT THE SEA CREATURE

*It is not actually one animal, but rather consists of many separate animals called polyps living in a colony

*Each colony is either male or female, though typically more are females

*There are around 300 species of sea pens. They prefer deeper waters where turbulence is less likely to uproot them

* They position themselves favourably in the path of currents meaning they have access to a steady flow of plankton, their main food source