Hundreds of mourners have gathered to farewell a football player who died while on a dream European holiday with the love of his life.

Jake Ryan, 39, was in Sicily with his partner Kimberly Driedger when he was struck by a train on October 13.

The Bali Bombing survivor was a well known AFL star who played for 11 clubs throughout his sporting career.

Family and friends remembered Jake as a ‘great man’ at the emotional wake on Friday morning.

The service was capped to 100 people due to COVID-19 restrictions limiting gatherings in the state of Queensland.

But a second ceremony was held at the Metricon Stadium in the afternoon to give the wider community a chance to say goodbye, reported the Gold Coast Bulletin. 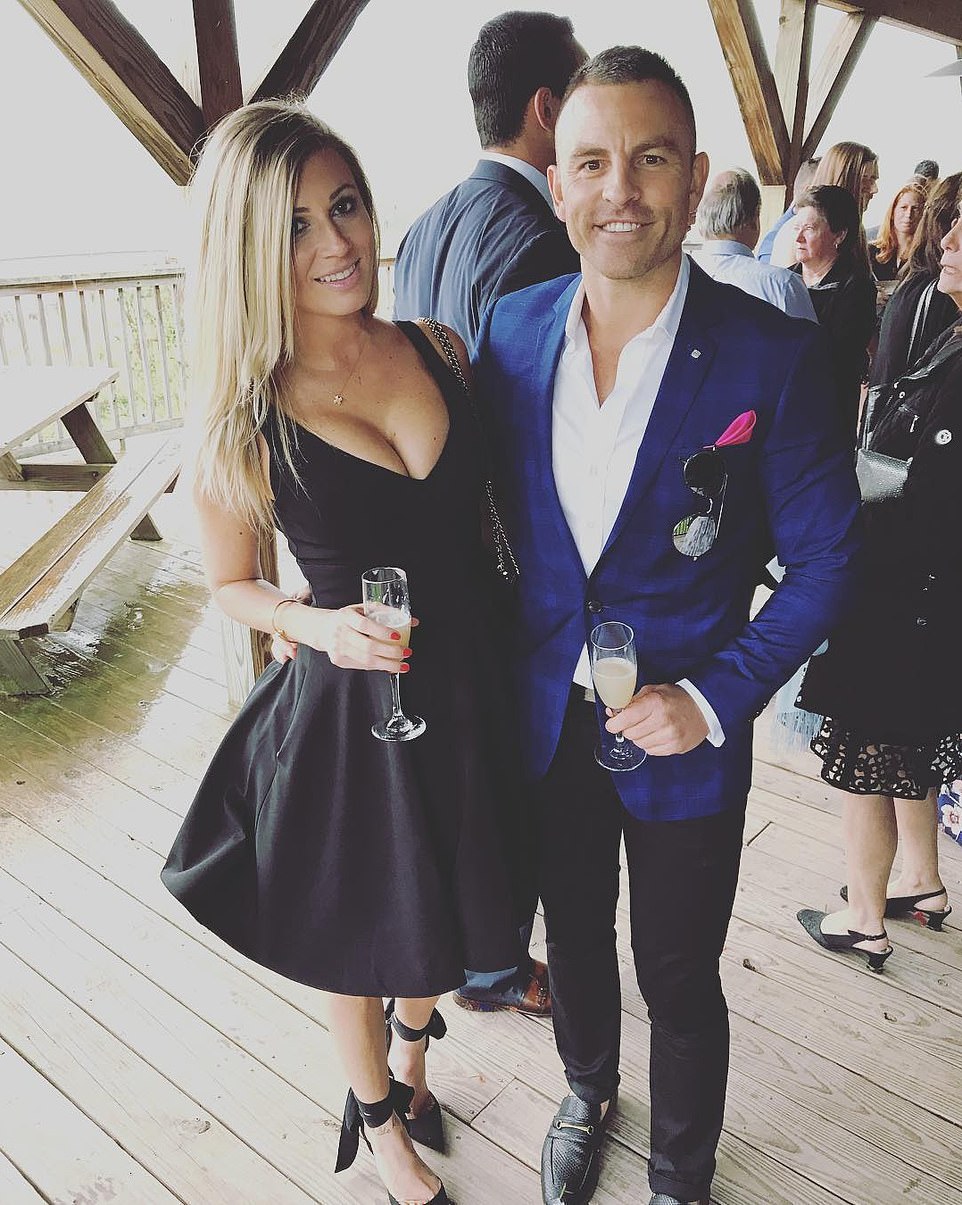 Jake Ryan, 39, was in Sicily with his partner Kimberly Driedger (both pictured) when he was fatally struck by a train on October 13 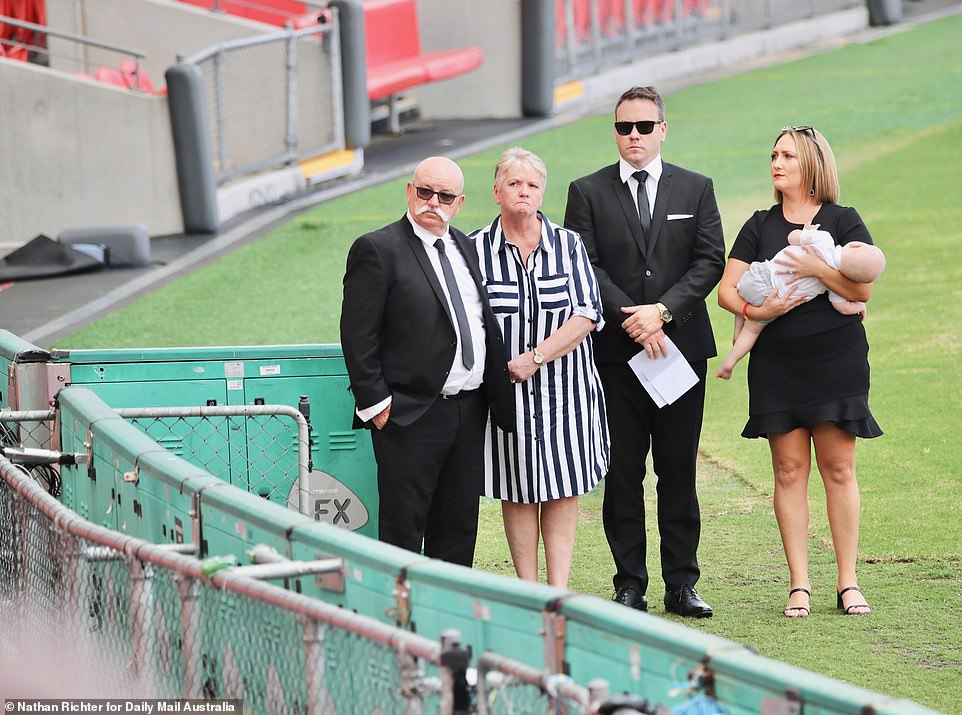 Family and friends remembered Jake as a ‘great man’ at the emotional wake on Friday morning (Pictured: father Danny Ryan with wife Leanne Ryan, brother Mitch Ryan and his partner and baby) 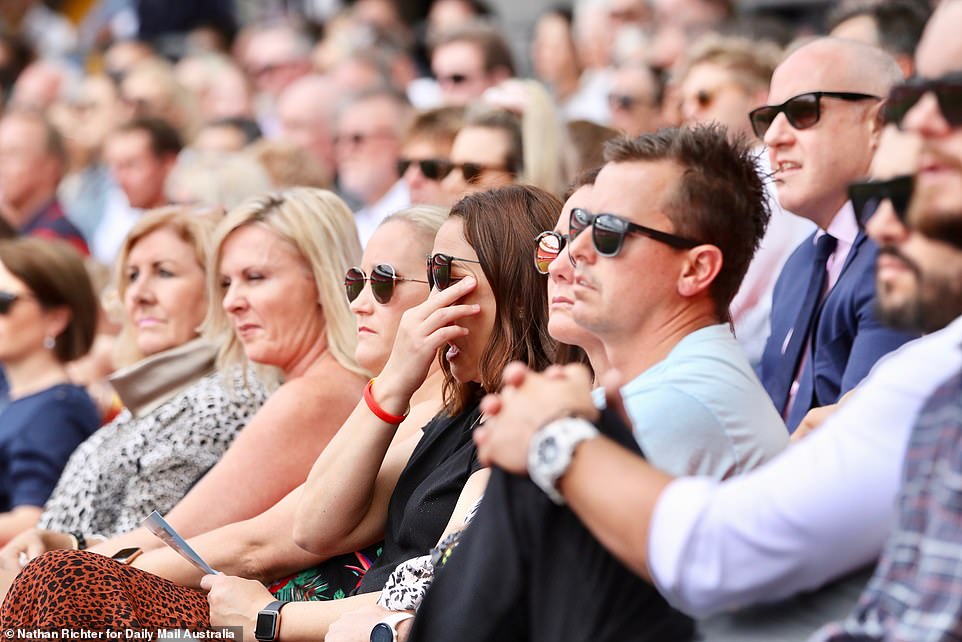 The grandstand had a more sombre ambiance than the usual cheers and screams of football fans.

Jake’s father Danny and his brother Mitch braved the crowds to pay tribute to their son and brother.

They wore black suits and sunglasses as they repeated the heartfelt sendoff they had given at the funeral that morning to a much larger crowd.

‘To my brother, my mate, my hero, you taught me so much about life, about myself, about footy and how to treat people,’ his brother Mitch said.

‘I hope I make you proud mate, I have no doubt we will meet again. 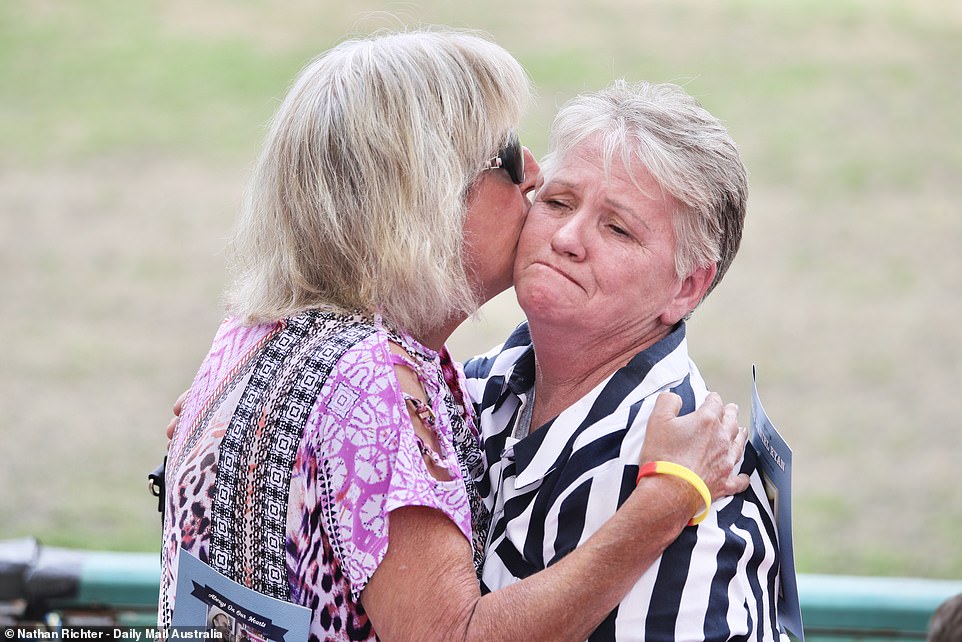 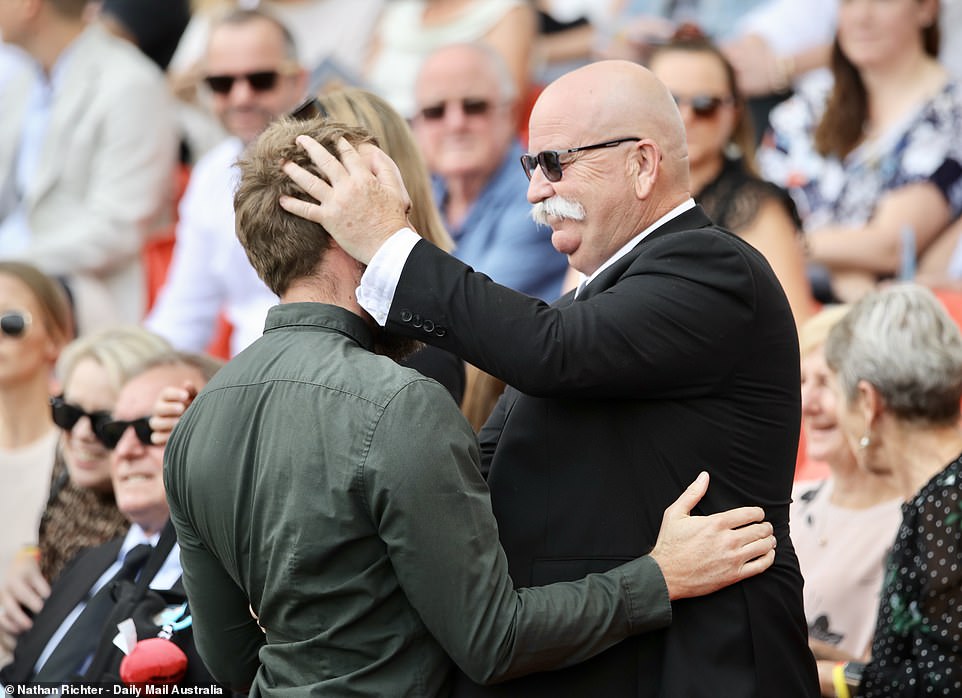 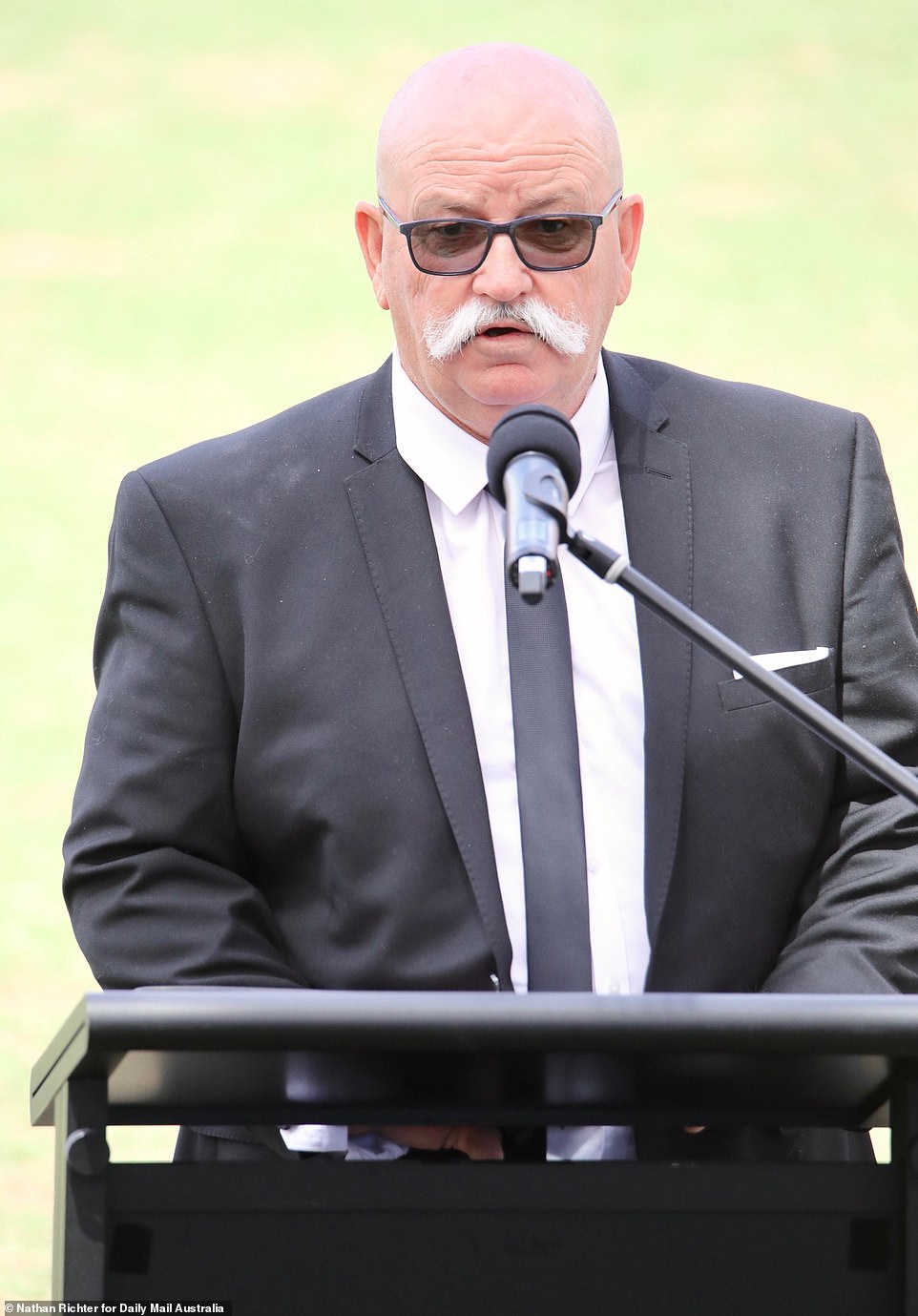 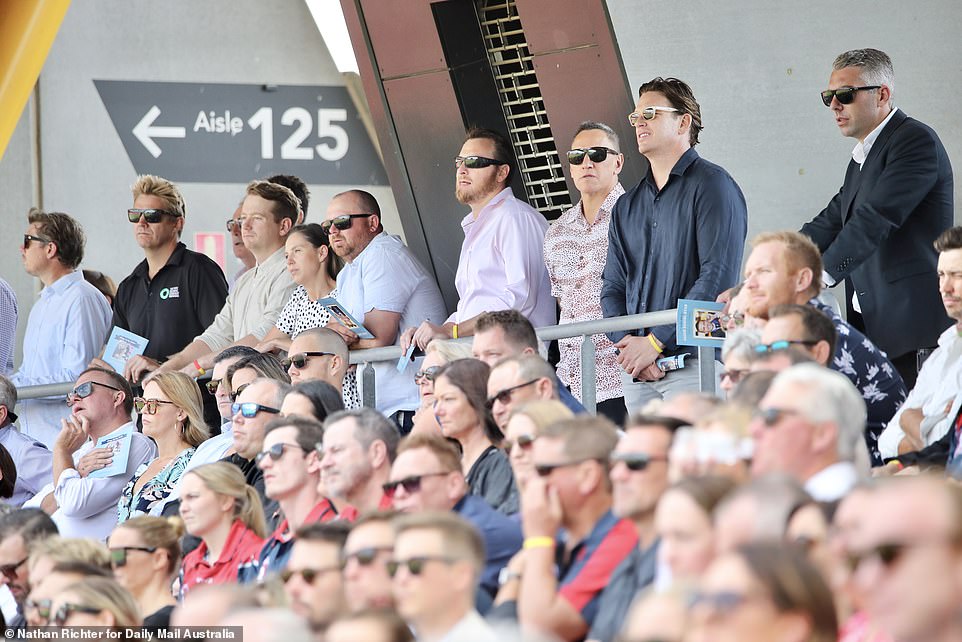 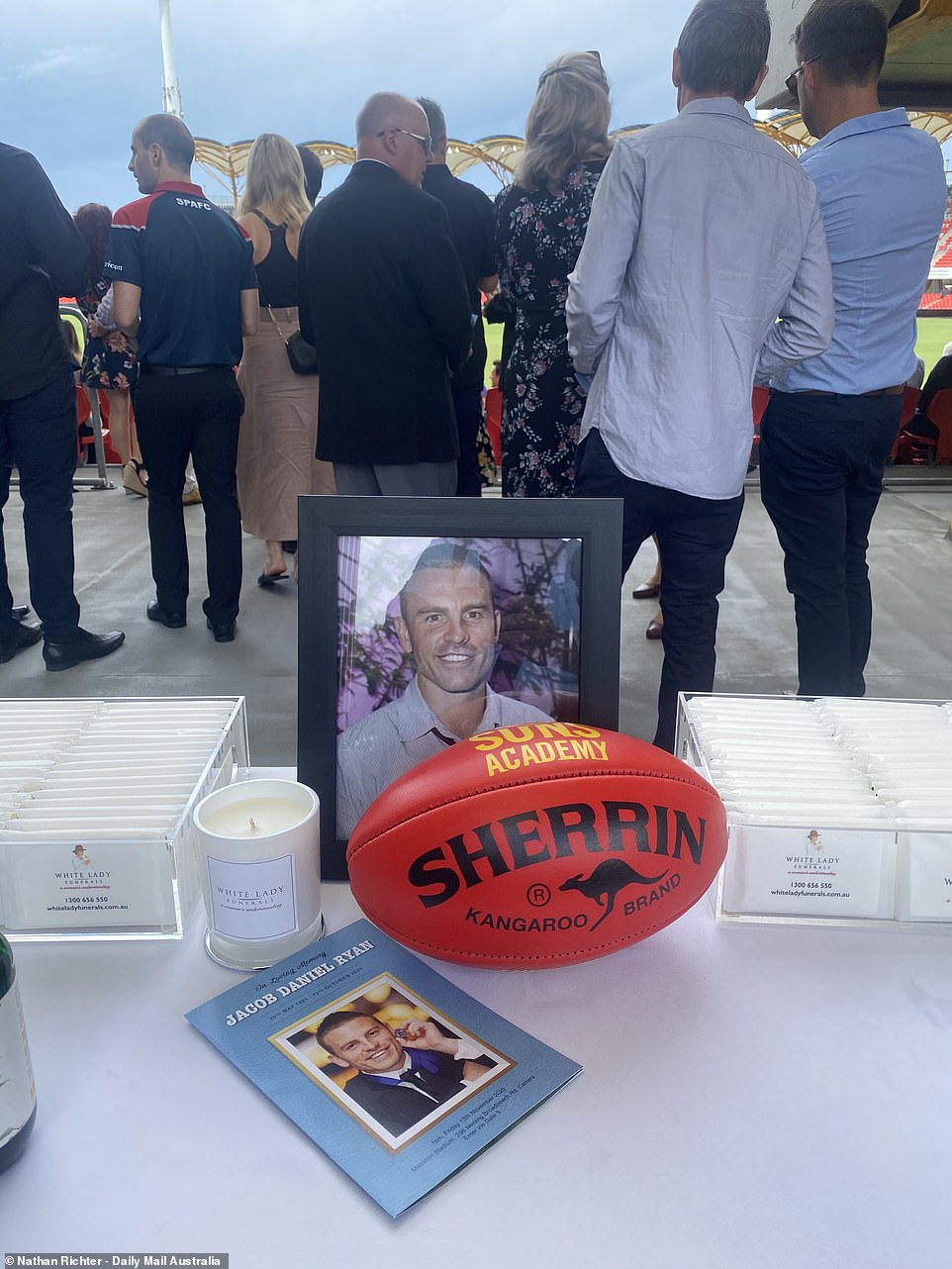 Candles, a Sherrin AFL ball and a a photograph of Jake Ryan sit on a table at the Gold Coast memorial for the AFL player

While his father Danny lamented the fact he would never get a chance to see his son’s cheeky smile one last time.

Football players and supporters from Jake’s home club the Surfers Paradise Demons were out in force to say their farewells.

Players and supporters donned red and blue polo shirts and shared memories of his dedication to the AFL during the memorial.

Close friend John Rankin recalled a story of him flying all the way to the Gold Coast from the United States to watch his team play the 2019 QAFL grand final. 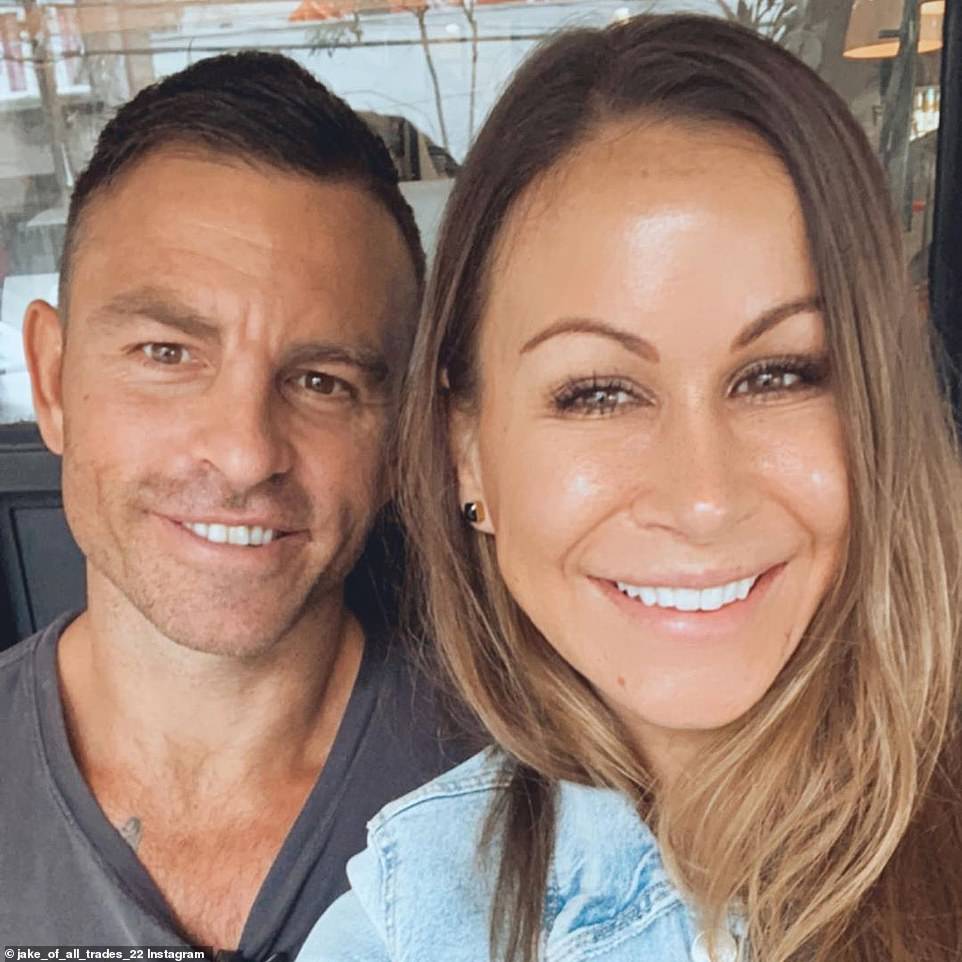 Jake Ryan, 39, (pictured with girlfriend Kimberly Driedger) had been on a dream holiday through the United States and Europe while working remotely for a real estate website 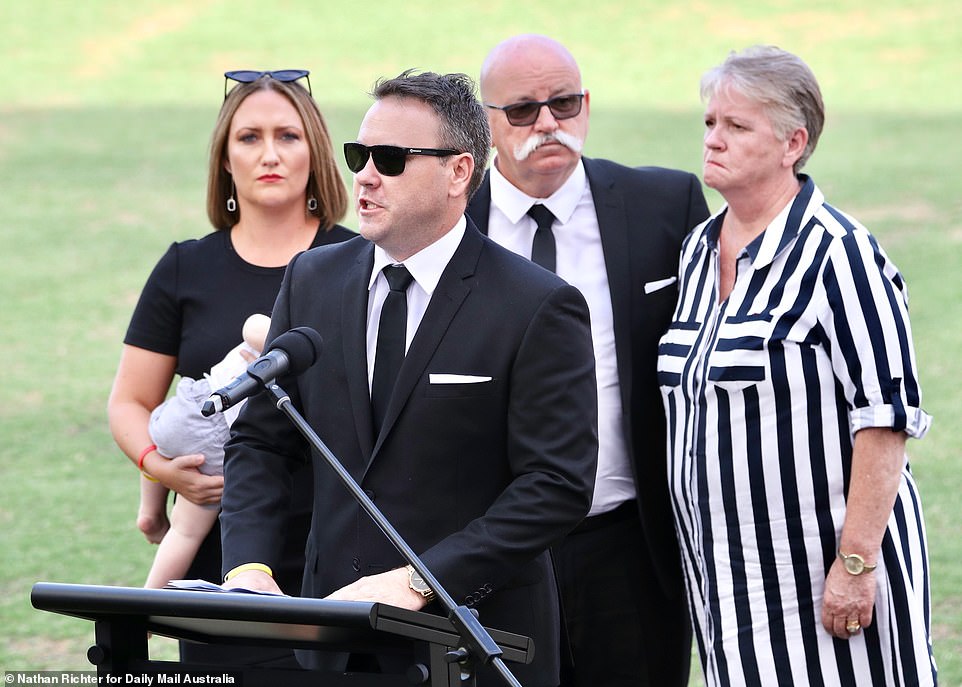 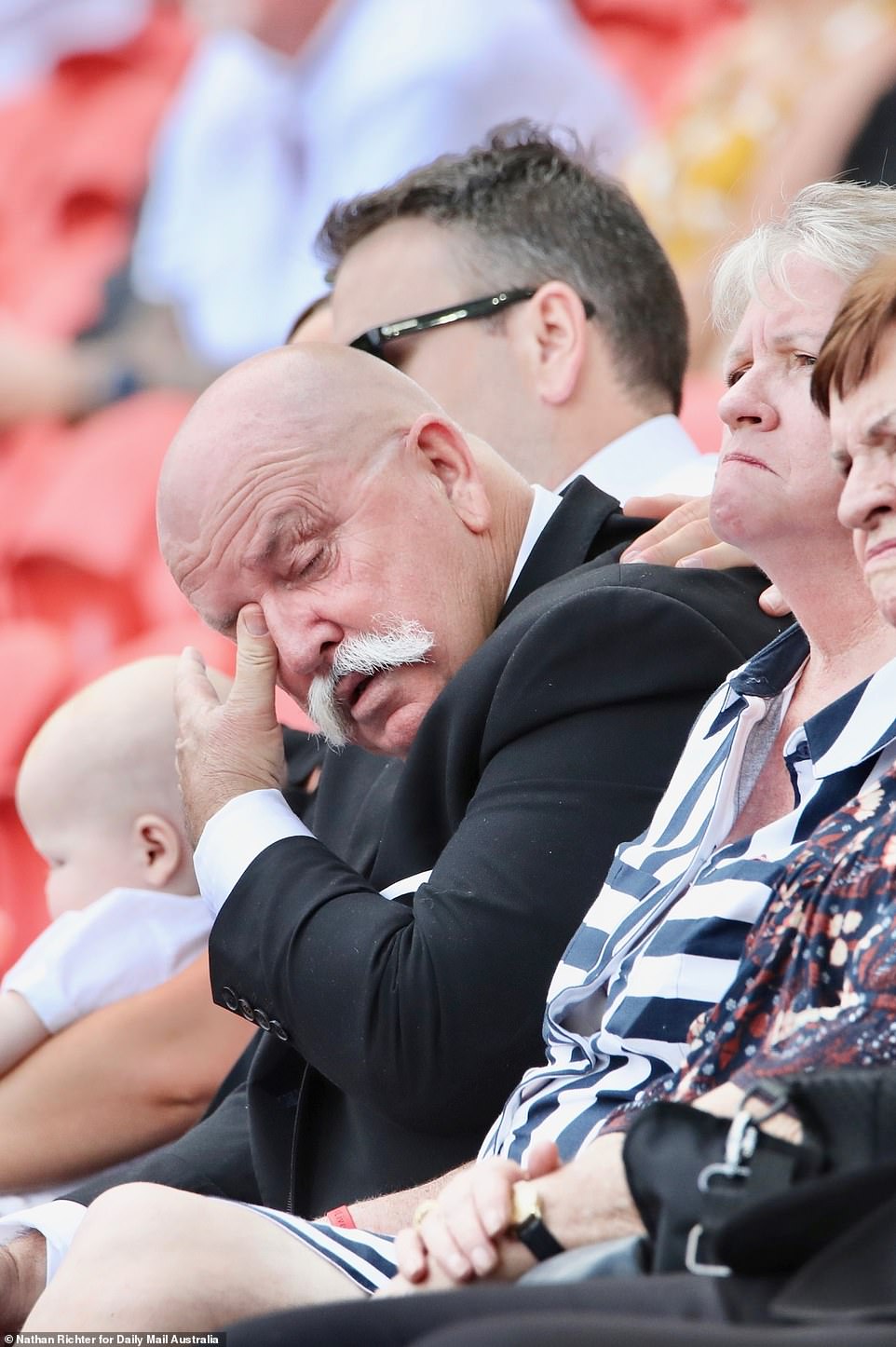 The funeral service earlier that day had even finished with the football club’s song – ‘It’s a Grand Old Flag’ as Jake’s hearse was carried from the chapel.

The stadium celebrated a similar moment at the end of the memorial as mourners broke into one final cheer to honour the fallen footballer.

His family previously aired their frustrations to the media over the 100 person limit for the funeral service.

But after being denied an exemption they went ahead with organising the wake at the stadium, which was allowed to host up to 500 mourners.

Jake Ryan was clipped by a train and killed while out jogging at Avola in Sicily on October 13. 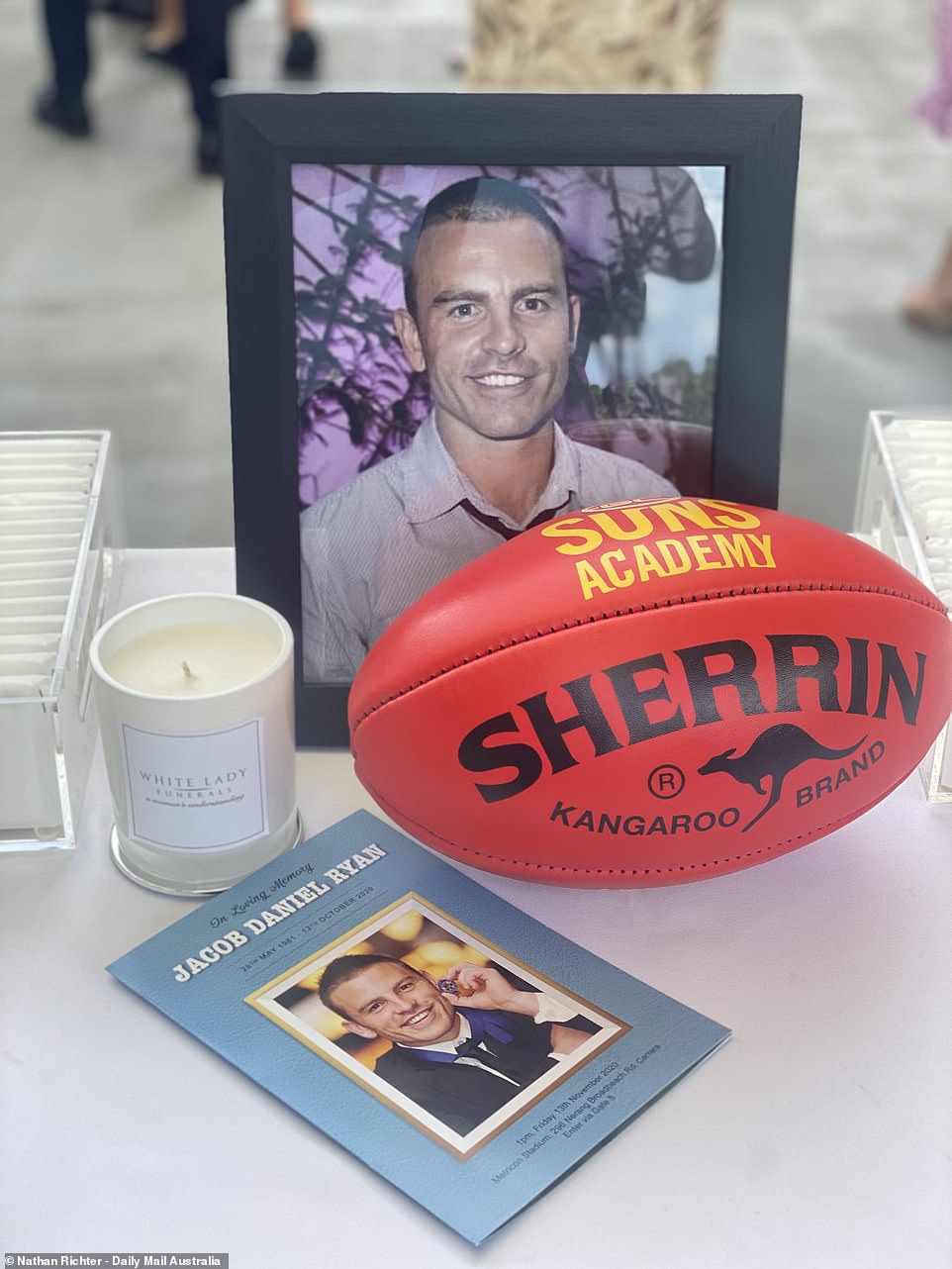 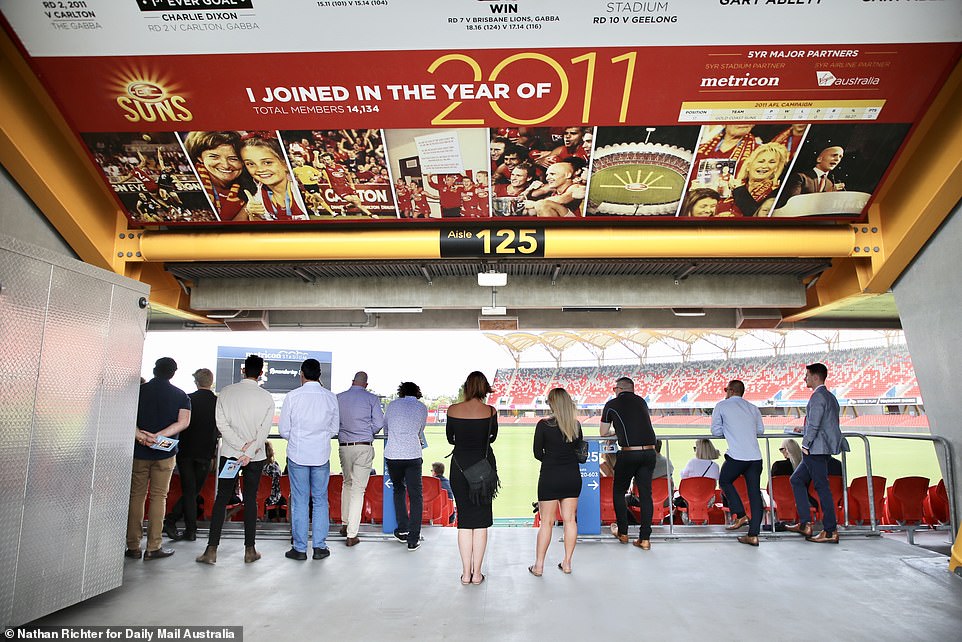 He was wearing headphones and didn’t hear the train before it fatally clipped him.

Despite the driver’s attempts to resuscitate him he was unable to be revived.

The footballer had just spent two months travelling in the United States with his partner Kimberly Driedger before moving to Europe.

He had just started a new job with a New York-based company better.com and was working remotely after meeting up friends in Noto.

They had plans to continue travelling for many more months, including spending Christmas in Portugal before tragedy struck. 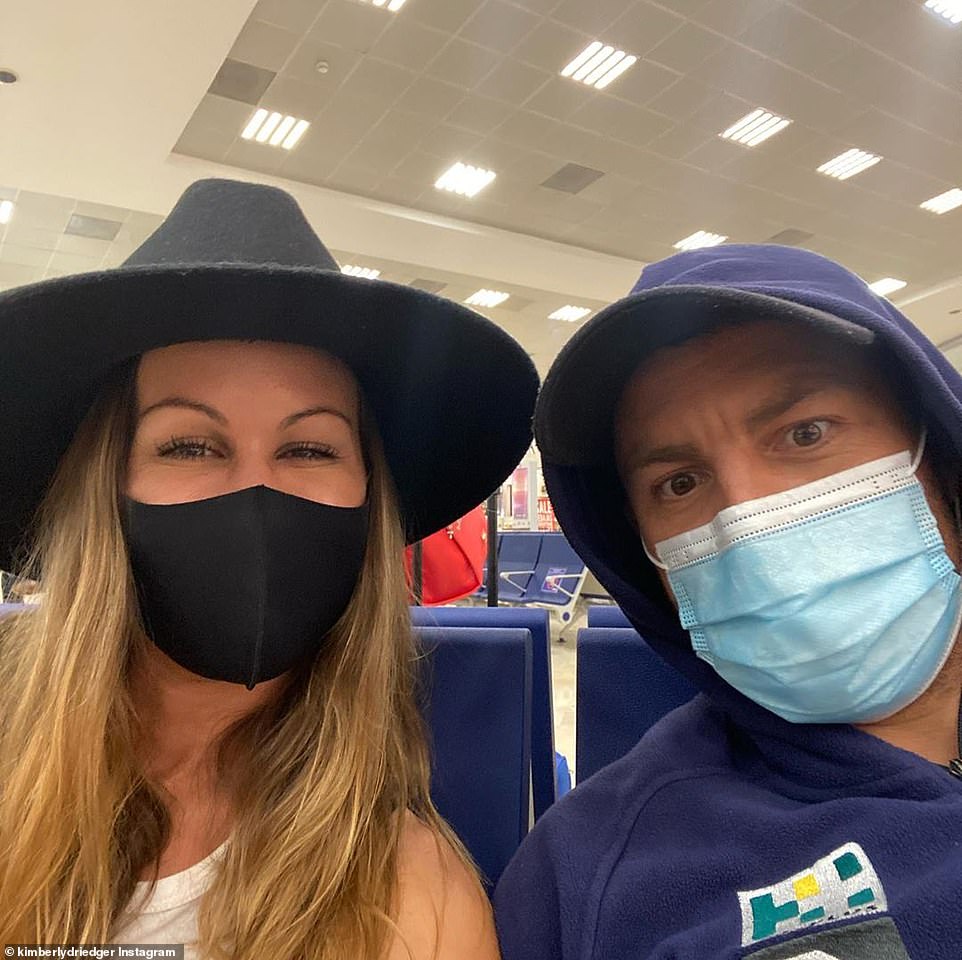 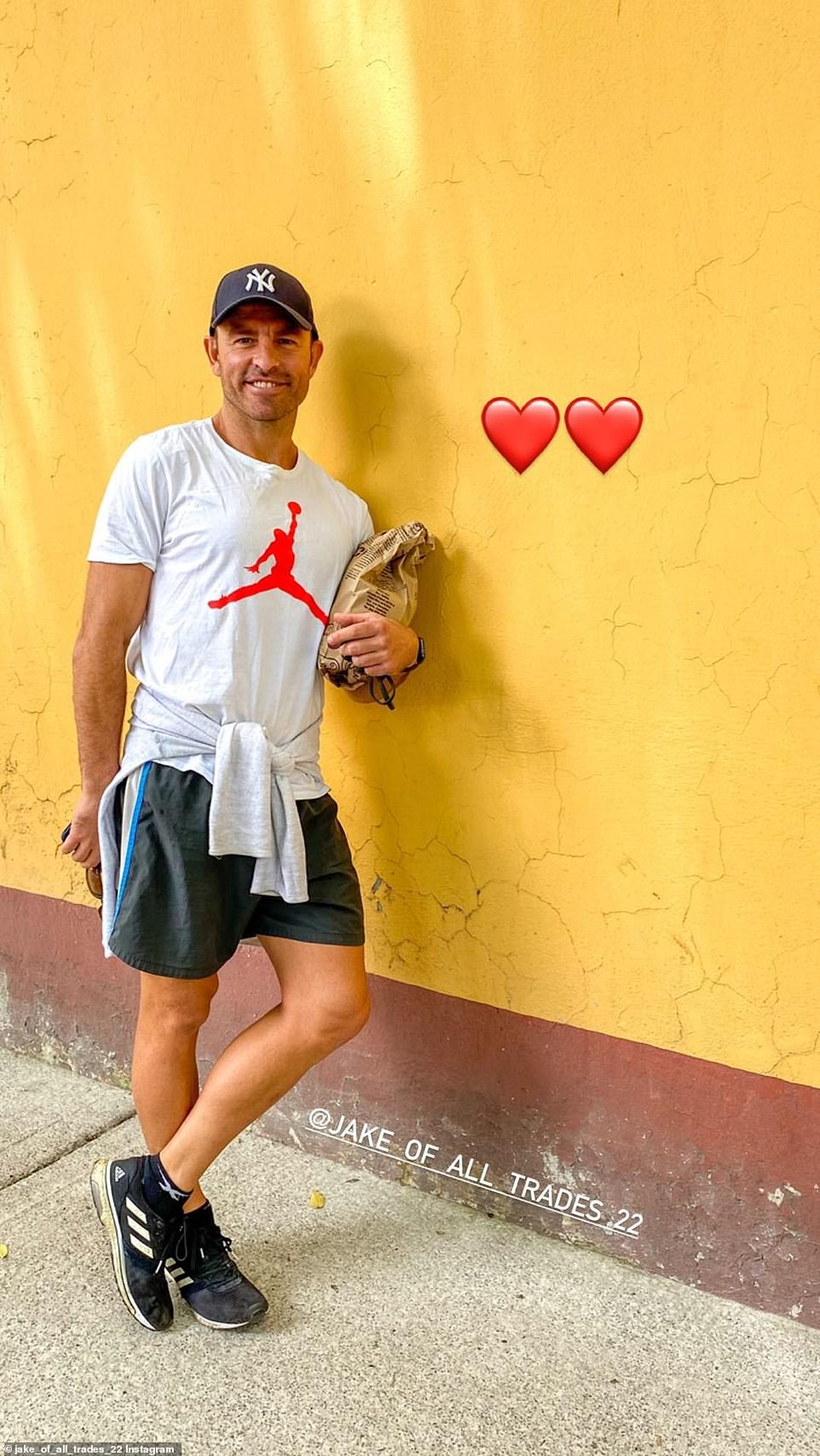 He had just started a new job with a New York-based company better.com and was working remotely after meeting up friends in Noto