The daughter of rugby league legend Mark Geyer has won a defamation case over false claims she featured in a sex tape – with a jury finding largely in her favour.

A crying Montanna Geyer hugged her father and family after a jury of four men found she had been slandered by aspiring journalist and sports fan Fouad Ghosn, 24.

The NRL Memes Facebook page wrongly claimed in March 2019 that Ms Geyer was the woman in a sex video with player Tyrone May.

But a jury found otherwise on Friday evening – with Mark Geyer telling Daily Mail Australia his daughter’s name had been cleared.

‘Every action has a reaction and you can’t just say things about people behind a keyboard and get away with it.’ 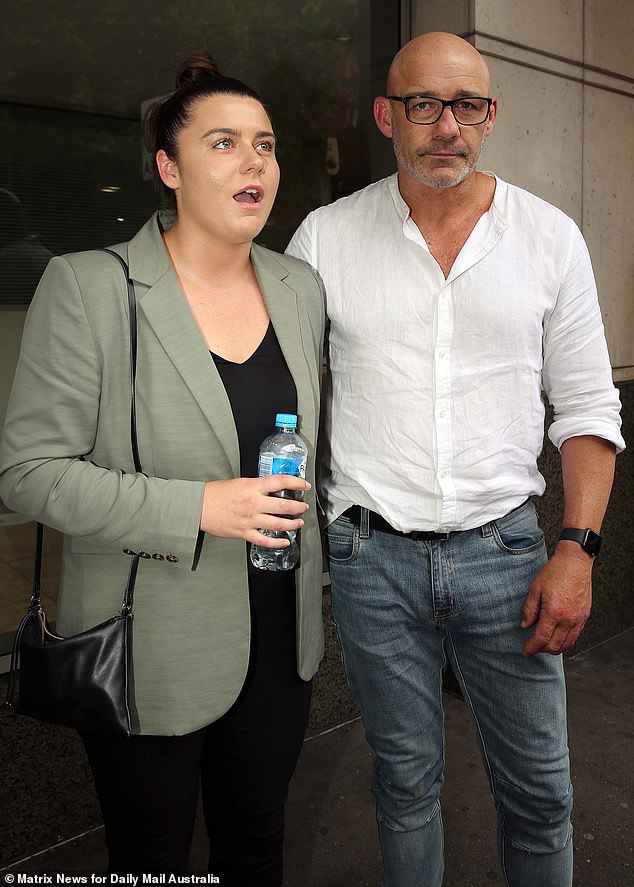 Montanna Geyer, 24, and her famous footballer-turned-broadcaster father Mark, embraced after the verdict. She has told a trial at the NSW District Court how the posts left her ‘broken’ 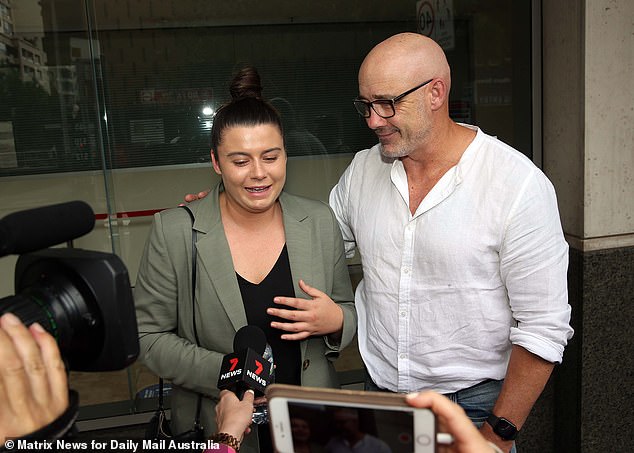 A visibly emotional Montanna said: ‘I just hope now people think twice about doing this kind of thing to people.’ 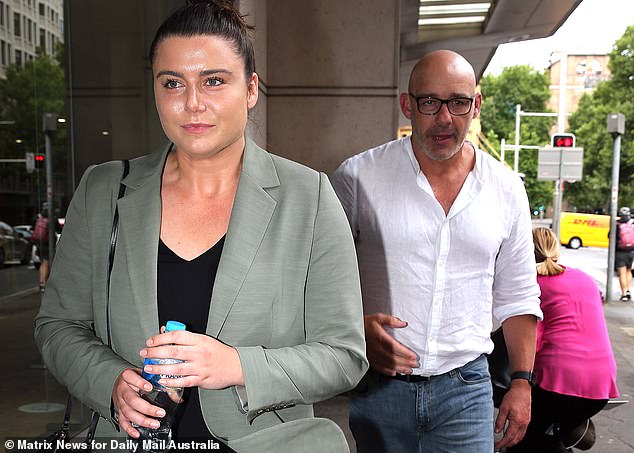 Ms Geyer shrieked in horror when she heard what had been posted about her online. Today, she learned she will win damages 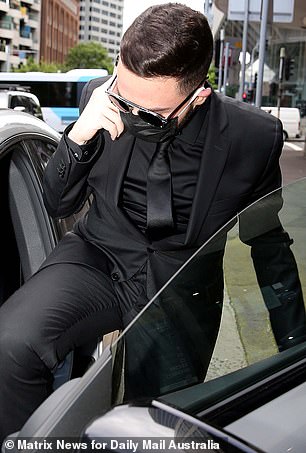 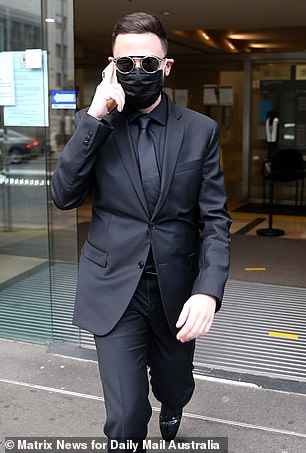 Mr Ghosn will have to pay unspecified damages to Ms Geyer. The 24-year-old hid his face behind a mask and sunglasses outside court this week. He had denied being behind the Facebook page

Mr Ghosn’s original, defamatory post said: ‘Oh this is getting spicy. The bird in the Tyrone May video is Mark Geyer’s daughter. Happy Days at Penrith.’

Over a five day trial, a jury heard how Ms Geyer’s brother, Logan, and father, Mark, fought to get the posts pulled and desperately tried to ‘nip it in the bud’.

‘You best be taking that down and apologising because that is not my sister,’ Logan Geyer wrote to the page, the trial heard.

Mr Geyer warned NRL Memes that the police were involved but the site replied: ‘I’m not defaming anyone, I’m reporting news.’

Montanna’s furious brother replied: ‘My poor sister is a mess because of you and this fake news site, so have fun at court’.

That day arrived this week – with Ms Geyer sitting less than two metres away from Mr Ghosn in a Sydney courtroom, occasionally glowering at the back of his head. 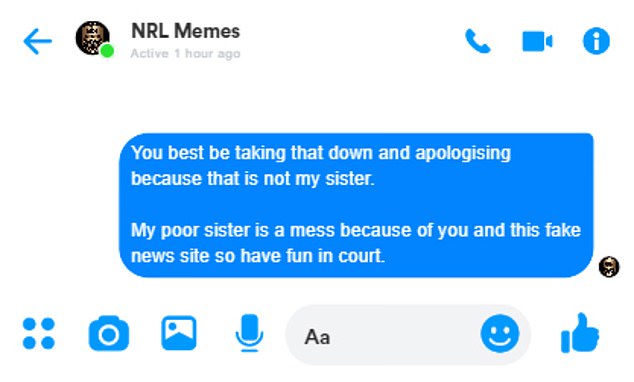 Ms Geyer sued Mr Ghosn on six grounds – with most, including that the post made her out to be the woman in the sex video, upheld.

In his closing address, Ms Geyer’s barrister, Roger Rasmussen, recounted to the jury how the young woman had become wrongly implicated in the Tyrone May sex video.

Mr Rasmussen said the main NRL Memes post included a flame emoji – or in his words, ‘that wonderful emoji – the hot fire.’

Ms Geyer told the jury she was ‘broken … beside myself … I couldn’t deal with it’ when she learned of the post.

Her father Mark – known for his lengthy stint in media with Triple M and rugby league career – told the court he heard her scream out at the time.

She was ‘an emotional wreck, shaking and crying,’ he said.

The court heard Mark Geyer tried to get on top of it by calling journalist Phil Rothfield and broadcaster Ray Hadley for advice in how to ‘nip it in the bud’ before ‘the mud sticks’.

Hadley named Ghosn as responsible for the page on March 7, publicly outing him and describing the young man as a ‘petulant, egotistical, plagiarist d***head’m the court heard.

Barrister Jonathan Cohen for Mr Ghosn said there was a ‘concerted campaign’ to make it seem like Mr Ghosn owned the NRL Memes and NRL Quality Memes pages.

Mr Cohen said Montanna’s brother, Logan, and father, Mark, had gone ‘on the net and everyone was saying it was Fouad Ghosn and they went off that.’

But Ms Geyer’s lawyer had noted the NRL Memes page had posted her statement of claim on the Facebook page just hours after it was delivered to him.

Mr Cohen said it was ‘implausible’ that Mr Ghosn would out himself like that. 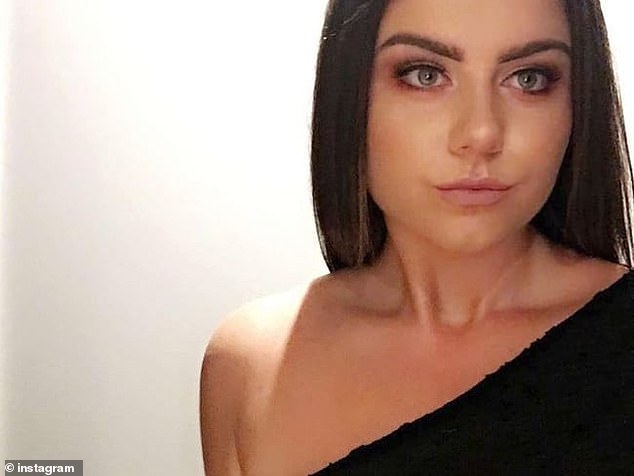 Of the false sex tape claim, Mr Cohen told the court there was ‘nothing’ defamatory about being the ‘victim’ of an illegally recorded clip.

(Footballer Tyrone May has separately admitted in court to producing four sex tapes without the consent of the women in them.)

Mr Cohen linked the false claims made about Ms Geyer to how society reacts to victims of sexual assault.

‘If two consenting adults are having sex and somebody pulls out a camera, without their consent films it, and spreads it online, they’re a victim in this matter. They become a victim.

‘In this day and age … being a victim does not bring a person into ridicule, it does not lower a person’s standing … in fact it does quite the opposite.’ 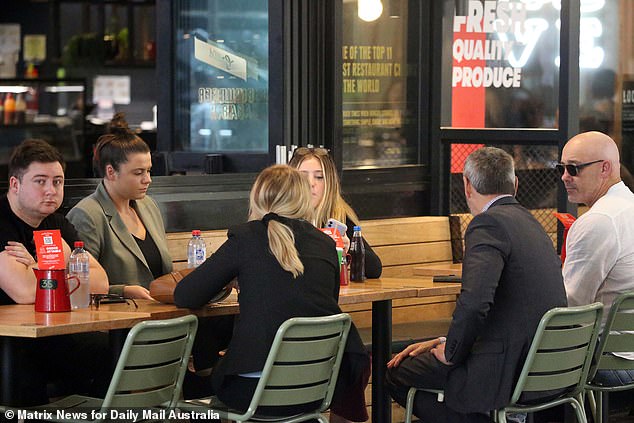 Montanna, her father and brother, Logan, grabbed lunch while the jury deliberated on Friday. At some points of the trial, Montanna was sitting just metres from Mr Ghosn – the man a jury found defamed her

Mr Cohen then went on to describe how an ordinary, right-thinking member of society would react to a sexual assault victim.

‘If somebody was a rape victim, the ordinary, right-thinking member of society would not lower their estimation of that person.

‘In fact, quite the contrary – rather than shunning the person, the ordinary person would do the opposite: rally around them and want to support them.

‘That’s a very important point you need to consider’.

The jury found otherwise with the court to consider damages at a later date.

Outside court, a visibly emotional Montanna said: ‘I just hope now people think twice about doing this kind of thing to people.’ 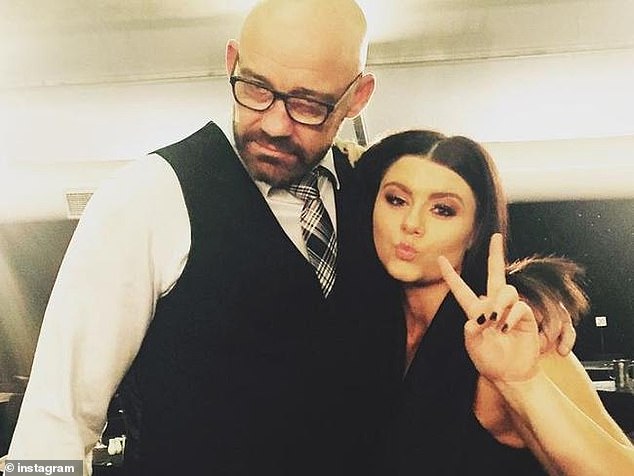