A North Carolina news crew almost plummeted off a bridge when it collapsed during dangerous flash flooding that has killed at least four people and left three missing.

Parts of the Tar Heel state experienced torrential downpours and as much as 10 inches of rain inundated roadways on Thursday.

The heavy rain came as Tropical Storm Eta spiraled away from Florida towards the Atlantic Ocean, but left behind tropical moisture that mixed with a cold front to produce flash flooding.

In one scary incident, Fox46 reporter Amber Roberts and photojournalist Jonathan Monte were forced to flee as a bridge in Alexander County collapsed live on-air. 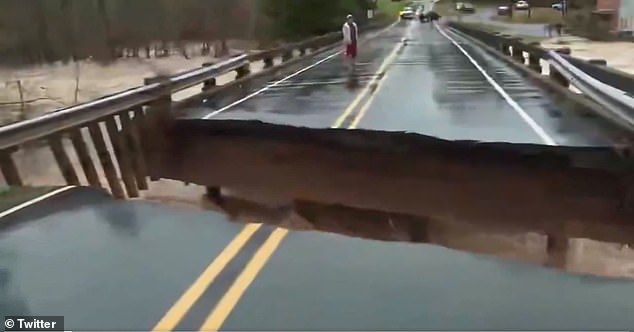 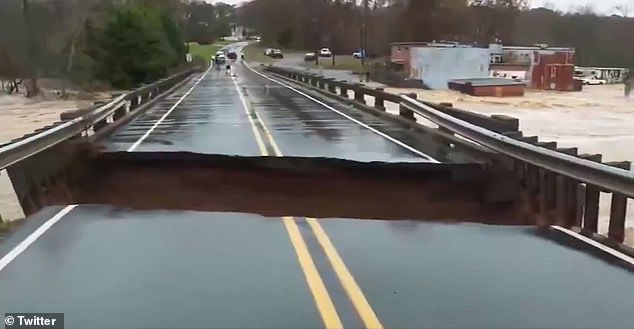 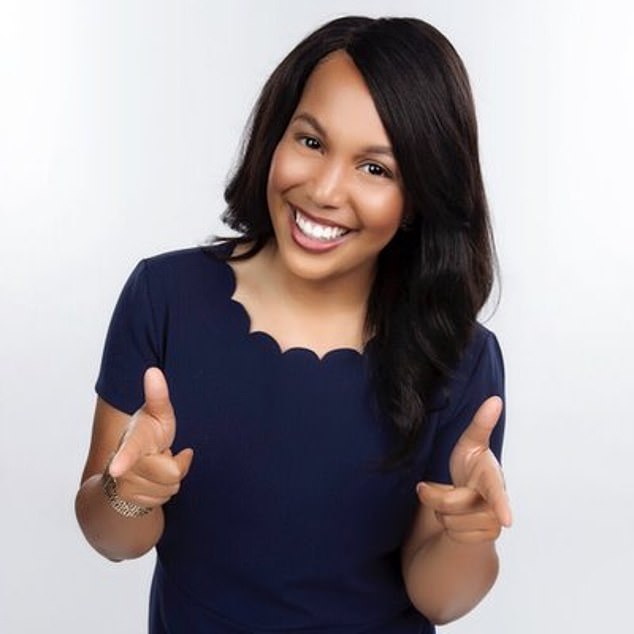 Footage begins with Roberts reporting on the flash flooding near the Hiddenite Bridge when it suddenly split in half.

‘This is incredibly scary!’ Roberts yells as the bridge’s concrete and stone crumble into the rushing water underneath.

A woman who witnessed the collapse turns around in the distance and makes a made dash for safety.

‘Live on TV we saw the road collapse.’ Roberts says. ‘The same road we were just standing on, so thank god we’re backing up and we’re slowly going off of the bridge.’

Roberts and Monte were able to get to safety and were not injured in the incident. 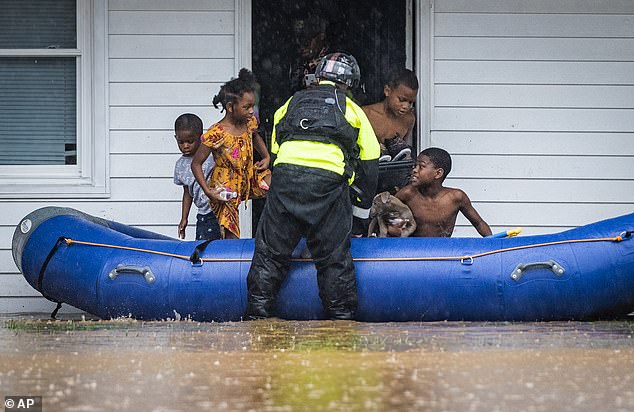 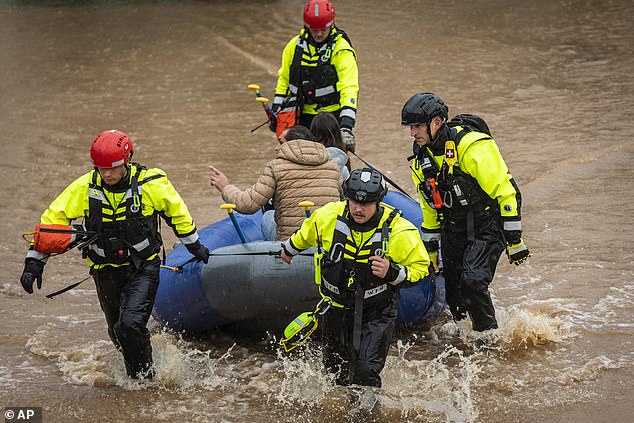 Meanwhile, at least four people are dead and three are missing as local authorities work to navigate the flooding.

The Wake County Sheriff’s Office revealed on Thursday afternoon that the body of an 11-year-old-child was found in Rolesville.

Witnesses said the child was playing near an overflowing creek when he drowned.

One of the dead bodies was discovered in a camper. 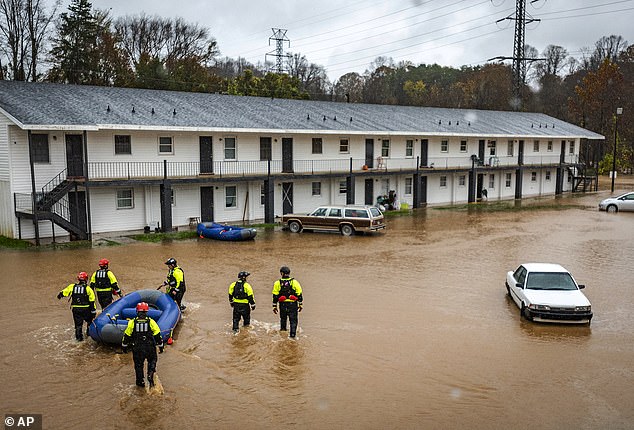 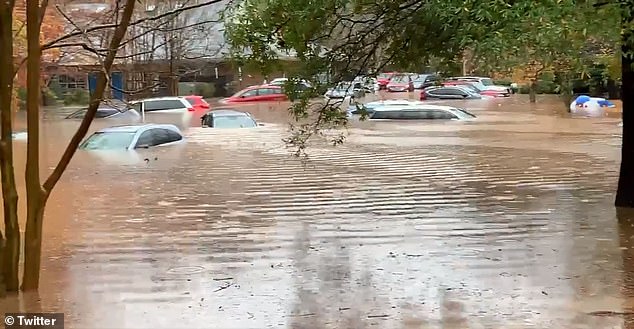 A search in the area continued Thursday evening for one adult and a one-year-old child.

In addition to the campground, a motorist traveling near Hopewell Church Road in the Vashti community died in a car crash due to a bridge outage and high water.

The victim was pronounced dead at the scene. The deceased and missing people’s identities have not been disclosed by authorities.

The search will continue at 8am on Friday.

‘We’ve had approximately 50 roads across the county (which) have been compromised. Four bridges have been washed away.’ 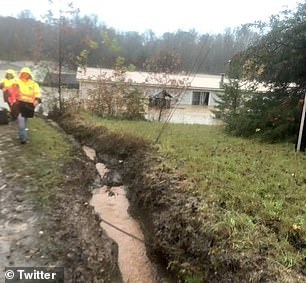 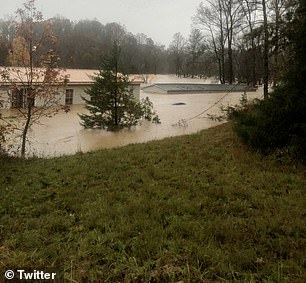 Pictured: Images shared by the Iredell Fire Department showed flooding in the area on Thursday 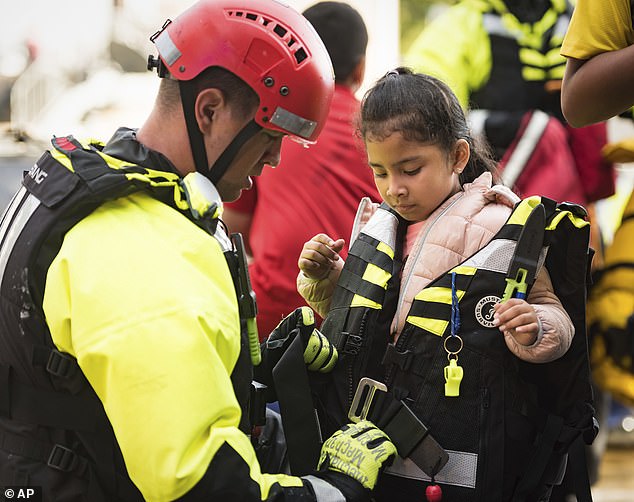 A member of the Winston-Salem Fire Department’s water rescue team unzips the life jacket worn by Isabella Molina’s (right), 5, after bringing her from an apartment complex to drier land Thursday,

In Charlotte, where more than 4.5 inches of rain dropped in under six hours, the flooding caused charter school to evacuate.

The Charlotte Fire Department announced that 143 students and staff were removed from the premises as water levels rose.

Winston-Salem Journal reports that an additional 38 people were evacuated from Colonial Estates apartments, where nearby Mill Creek overflowed.

More than 35 people were saved in Mecklenburg County, and widespread damage was reported in Iredell County.

‘Even though the rain has stopped falling, the flood waters will continue to rise. Water will have to come downsteam and eventually in our area,’ wrote Iredell authorities. 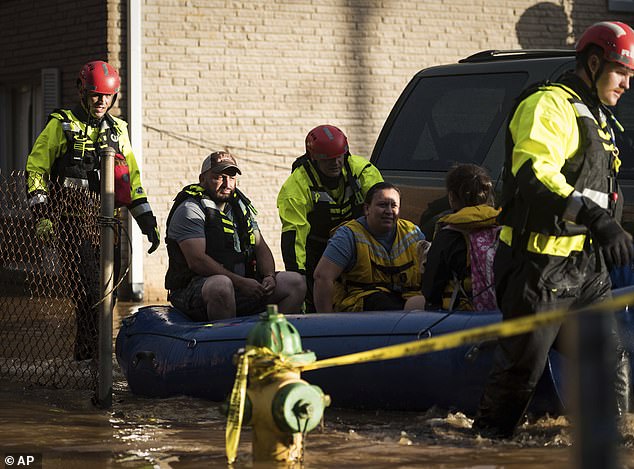 A total of 8.6 inches of rain fell in Rocky Mount, while 7.66 inches landed in Wilson.

Much of North Carolina remains under flash flood warnings. Flash flood watches have been placed along the mid-Atlantic coast from South Carolina to Virginia.

Numerous roadways were blocked by high water and debris, which caused damage that will take a while to fix.

‘This is not going to be a two-day fix, a two-week fix,’ Gillespie told Associated Press. ‘It will be a months-to-a-year fix.’

Weather officials said the worst of the rainfall would leave the area after Thursday, but flooding would remain a problem.

Fortunately, any rainfall over the next few days will be light and allow for some of the floodwaters to dry.