A young dog who died giving birth had puppies rotting inside her and ‘smelt like death’ claims a whistleblower who worked at the breeding mill which RSPCA officers have raided multiple times.

The boxer named Strawberry was used for breeding before she was even one year old, according to animal rights group Oscar’s Law.

The puppy farm in northern NSW was raided by the RSPCA last Wednesday for the second time since 2015 over allegations of animal cruelty. 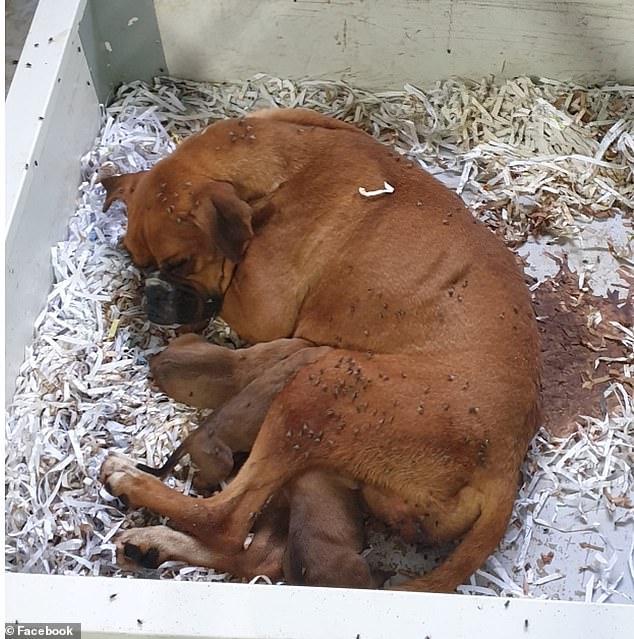 A former worker said Strawberry was used for intensive breeding despite her young age before falling ill and dying in February, WA Today reported.

She managed to give birth to three pups which activists believe are now being sold at pet shops in some of the country’s wealthiest suburbs while other pups rotted inside of her.

Strawberry was allegedly covered in flies and maggots were found inside of her mouth and vagina.

‘It was a very horrible thing to see, she was covered in flies, the first time I had seen her, and the smell of her was like death,’ the former employee said.

‘[The owner] had gone into the pen [Strawberry] was in and nudged her with his foot while saying, “Are you dead yet?”, and was laughing about it.’

The employee claimed dogs were often left in squalid conditions and their pens were often covered in faeces as they were only allowed out for 20 minutes a day.

The woman said two months after Strawberry’s death two of her pups were advertised for sale at Claremont Puppies and Pet in Perth, Western Australia. 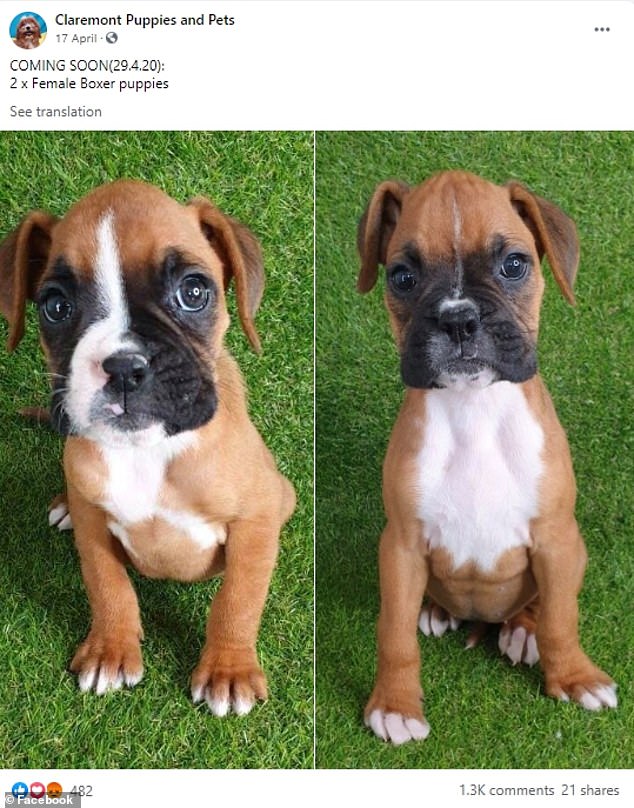 The woman said two months after Strawberry’s death two of her pups were advertised (pictured) for sale at Claremont Puppies and Pet in Perth, Western Australia 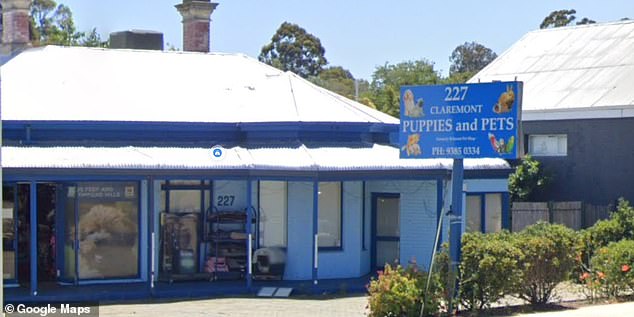 Owner Victor Finkelstein didn’t deny getting the dogs from the business but denied it should be classified as a puppy farm.

‘I deal with this breeder because the conditions are good and they care for their animals,’ Mr Finkelstein told Nine News.

‘I visit them every year. Their conditions are good. I wouldn’t be buying off them if I thought they were a puppy farm.’ 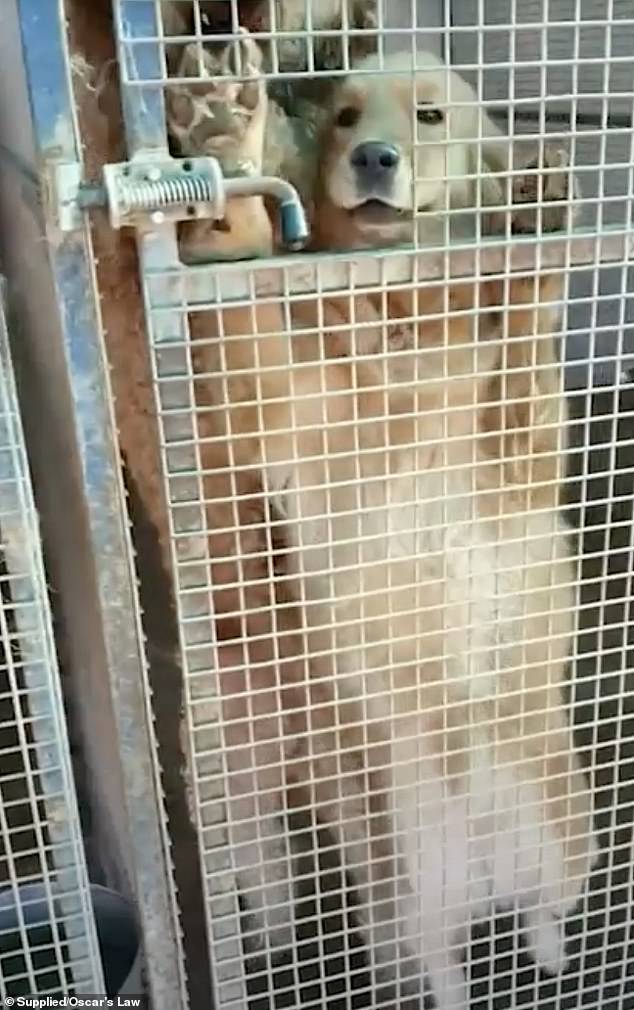 A farm in Inverell, NSW, was raided by the RSPCA on allegations of animal cruelty (pictured, dogs at the Inverell farm) 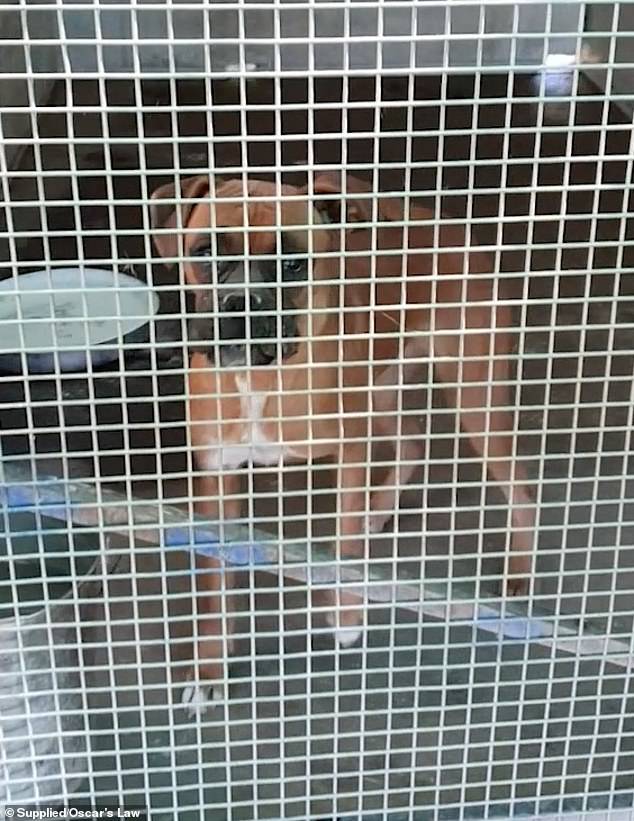 The business, which was charged in 2015, has also been accused of breaching breeding regulations (pictured, a boxer on the farm)

However, he did admit he hadn’t been to the business in 18 months.

‘I got some boxer puppies but I don’t know about the mum; it sounds like a load of c**p,’ he told WA Today.

Mr Finklestein said he was aware of the RSPCA raid on the breeder but believed animal activists pushed for the raid so legislation could be pushed through WA Parliament.

There is currently a Dog Amendment (Stop Puppy Farming) Act 2020 being tabled in WA.

It would require breeding records to be kept, stop the sale of dogs in pet shops and force an adoption model.

WHAT ARE THE PUPPY FARM RULES IN EACH STATE

Puppy farms are legal in NSW. The code of practice when it comes to the sale of dogs aren’t linked to any legislation, meaning some can go years without inspection.

The industry in NSW is mainly self-regulated, according to animal rights groups, and  there are no caps on dog numbers, and no caps on litter limits.

Victoria banned the sale of animals in pet shops unless they are from a registered shelter, rescue group or pound since July 1, 2018.

There is also a limit on how many litters and dog numbers in Victoria.

There is also an online register where people who want to sell an animal companion must register, which began on July 1, 2019.

Tasmania has similar circumstances to NSW.

There is legislation preventing there has to be a specific location on the business premises where dogs are killed.

They can’t be killed in front of other dogs or people.

There is a code of practice and breeder’s licence system in ACT, which was introduced in 2015.

However the sale of animals in pet shops is still allowed in the territory.

The sale of pets in pet shops and puppy farms are legal in NSW.

However, in May 2017 Queensland introduced a breeder ID system and anyone advertising a pet must include their ID in the advertisement.

There are no caps and limits on puppy farms in Queensland, and it is legal to kill dogs who are ‘no longer required’.

A code of practice was introduced in 2017, but it allows people to keep breeding dogs confined 23 hours and 30 minutes of the day.

It allows for the sale of animals in pet shops and allows puppy farms to kill their animals, as long as it isn’t by drowning.

Puppy factories and the sale of animals in pet shops is legal, however the McGowan Labor Government are drafting legislation that will be similar to Victoria’s.