A Sydney restaurant is selling a limited-edition burger inspired by Sizzler’s cheese toast, days after the chain revealed the secret recipe for its most iconic dish.

Described as a fusion of everyone’s favourite childhood snacks, the burger from Suzie Dukes is packed with two beef patties, melted cheese and spaghetti bolognese sandwiched between buns coated in crispy cheese.

Diners can feast on the decadent dish at either of Suzie Dukes two Sydney outlets – one in Ingleburn, 40 kilometres southwest of the CBD, the other in North Rocks, 26 kilometres northwest of the city centre.

But you’d better be quick because it’s only available until tonight – Friday, November 13. 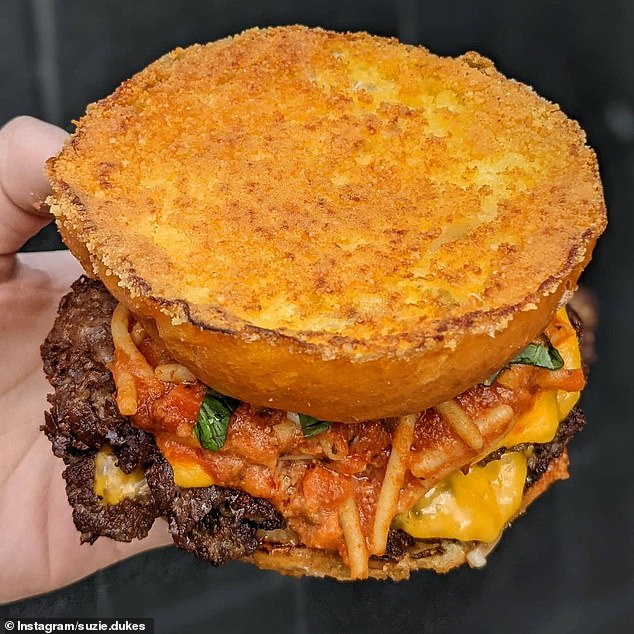 Photos of the burger have left mouths watering since they were uploaded on Instagram, drawing dozens of delighted responses with comments including ‘awesome’, ‘yum’ and ‘dream combo’.

But not everyone was so impressed.

‘There is a fine line between creativity and madness, and I think you may have crossed it,’ one man wrote.

The quirky creation comes days after Sizzler finally shared the secret recipe for its famous cheese toast, which has been the star attraction at its all-you-can-eat chain for more than 35 years.

Dozens of DIY recipes claiming to replicate the toast have circulated on social media for years, but this is the first time the restaurant has shared exactly how it makes what is now considered an Aussie classic. 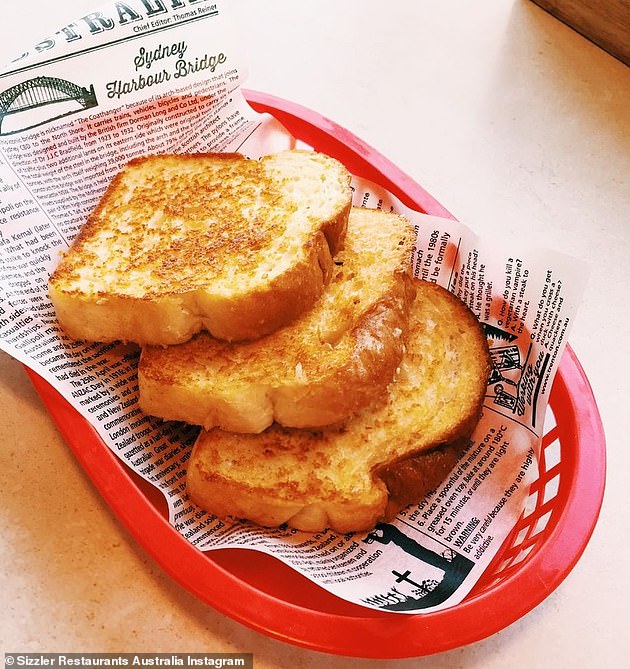 The first thing to do is combine ‘equal amounts’ of margarine with cheese in a bowl to create a thick paste.

Next, spread a generous amount of the spread on one side of the bread.

Over a low-medium heat, place the bread butter side down on a flat grill and toast for about 60 seconds, or until golden brown and cheese is melted.

The iconic cheese toasts are typically served free with every meal at Sizzler restaurants.

Combine ‘equal amounts’ of margarine with cheese in a bowl to create a thick paste.

Spread a generous amount of the spread on one side of the bread.

Over a low-medium heat, place the bread butter side down on a flat grill and toast for about 60 seconds, or until golden brown and cheese is melted. 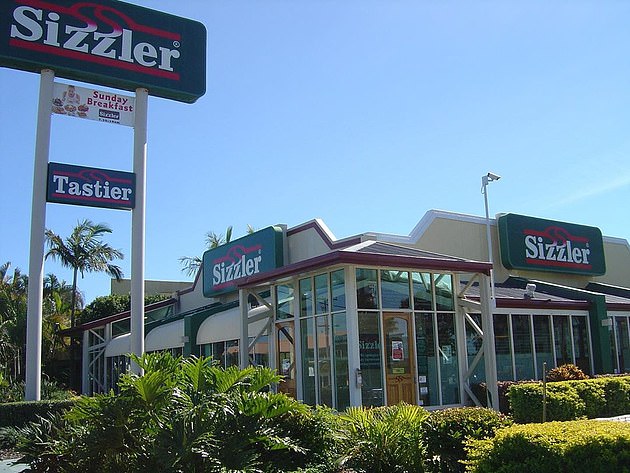 The chain announced all remaining restaurants in Australia will permanently shut its doors on Sunday, November 15. As recently as 2015, Australia was home to 26 Sizzlers

In October, the chain announced it would permanently shutter all of its Australian restaurants on Sunday, November 15 after three and a half decades in business.

‘It is with heavy hearts that we share the news that after 35 years it is time to say goodbye. The difficult decision has been made to close all remaining Sizzler Australia restaurants this November,’ the chain wrote on its website.

‘We are so very grateful to our dedicated staff and we want to thank each and every one of our customers for supporting us and creating and sharing memories at Sizzler over the past 35 years.

‘Our restaurants will remain open until the last day of trade on November 15, 2020, so there is still time to enjoy all your grill and salad bar favourites.

‘We hope to see you all for one last slice of Cheese Toast.’