Volvo has gone to incredible lengths to prove the safety of its latest vehicles – by raising 10 of them some 100 feet in the air with a crane before sending them crashing to the ground.

The monumental stunt was performed to simulate the forces that erupt as a result of high-speed accidents that can’t be replicated in conventional crash-test laboratories.

Emergency services were invited to the location to put their skills to the test against what would be the worst-case road traffic collision scenarios and help them to better understand how to safely remove injured passengers from stricken vehicles. 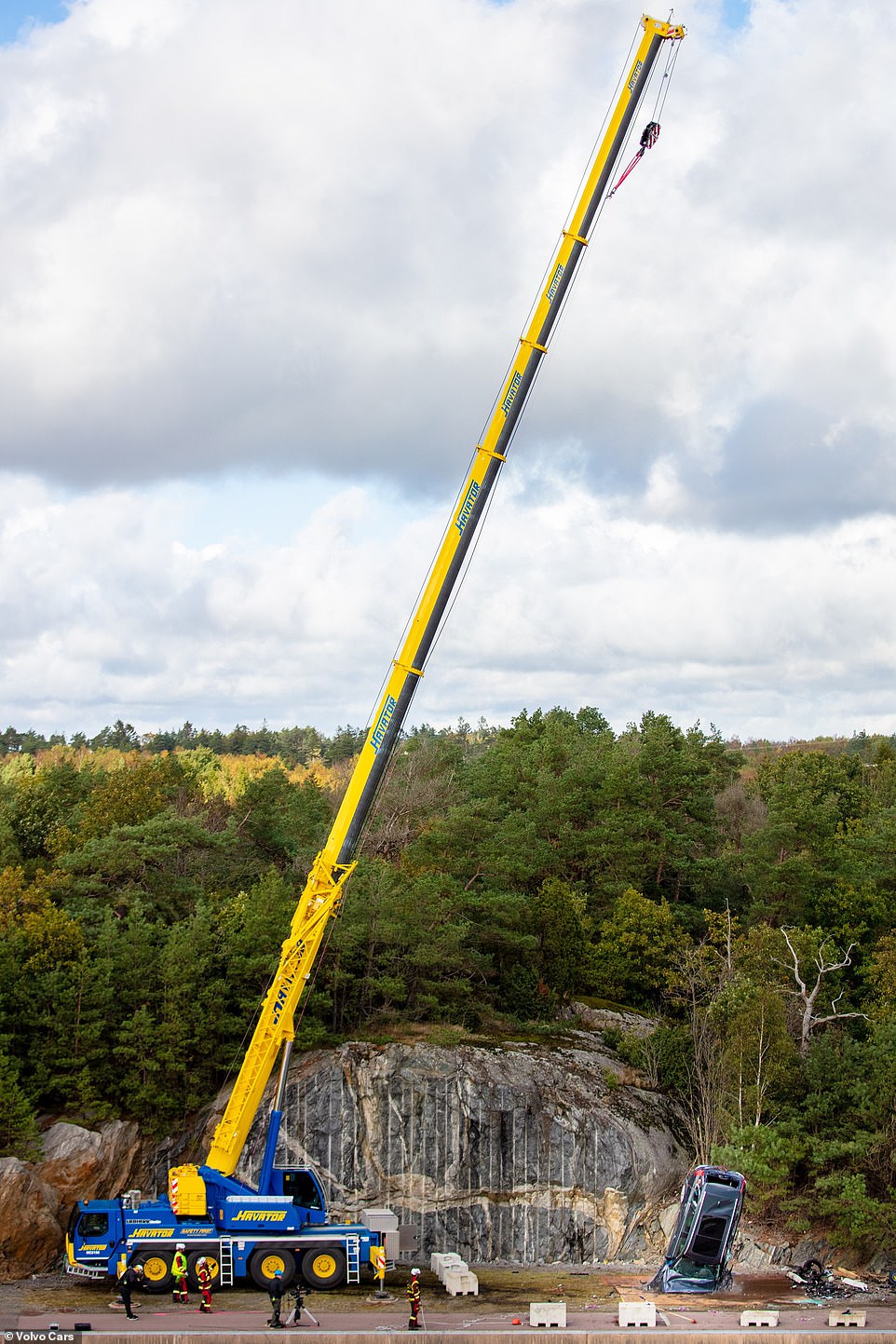 High safety standards: Volvo has crash tested the durability of its latest models by dropping them from 100 feet in the air

It’s the first time the manufacturer has destroyed multiple examples of its cars by letting them hurtle from a crane after being suspended 30 metres (98.5 feet) in the air.

Cars used for the test included a number of the brand’s SUVs, such as the XC40 and XC90, and saloon and estate cars, like the V60.

The impact of the drop compares to single-car accidents or collisions between a car and truck at high speeds – or accidents whereby a car takes a severe hit from the side.

In such situations, occupants inside the car are likely to be in a critical condition.

Therefore, the priority is to get people out of the twisted vehicle and to a hospital as quickly as possible using hydraulic rescue tools, known in the industry as ‘jaws of life’.

Extrication specialists often talk about the golden hour: the pivotal 60 minutes to release and get a patient to the hospital after the accident has happened. 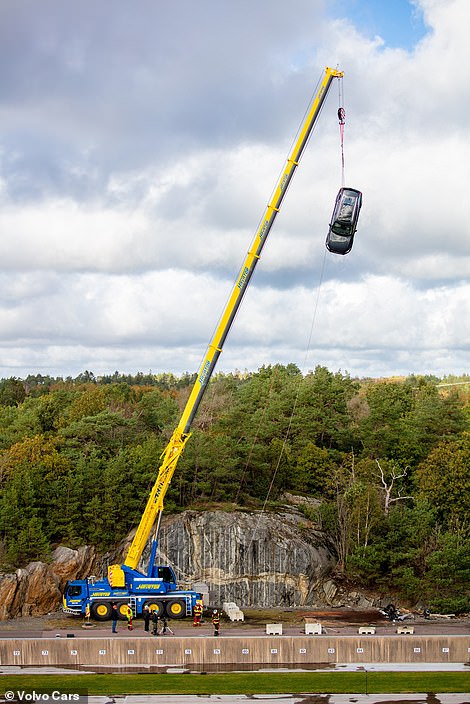 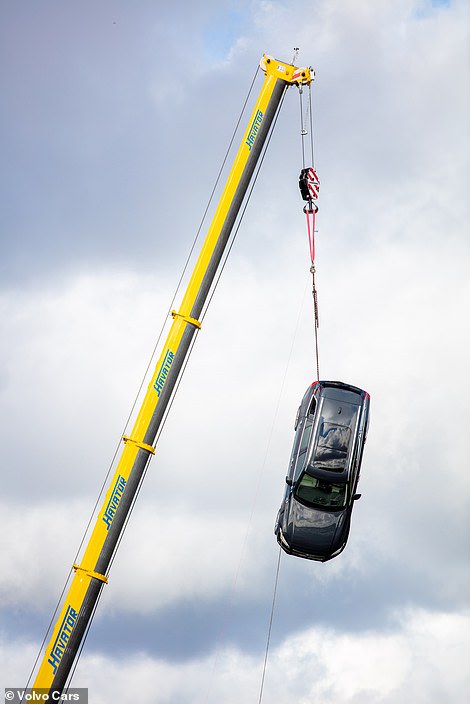 The Swedish car brand hoisted 10 of its models 30 metres into the air using a crane. The vehicles were then sent plummeting to the ground as part of efforts to simulate high-speed crashes on the road 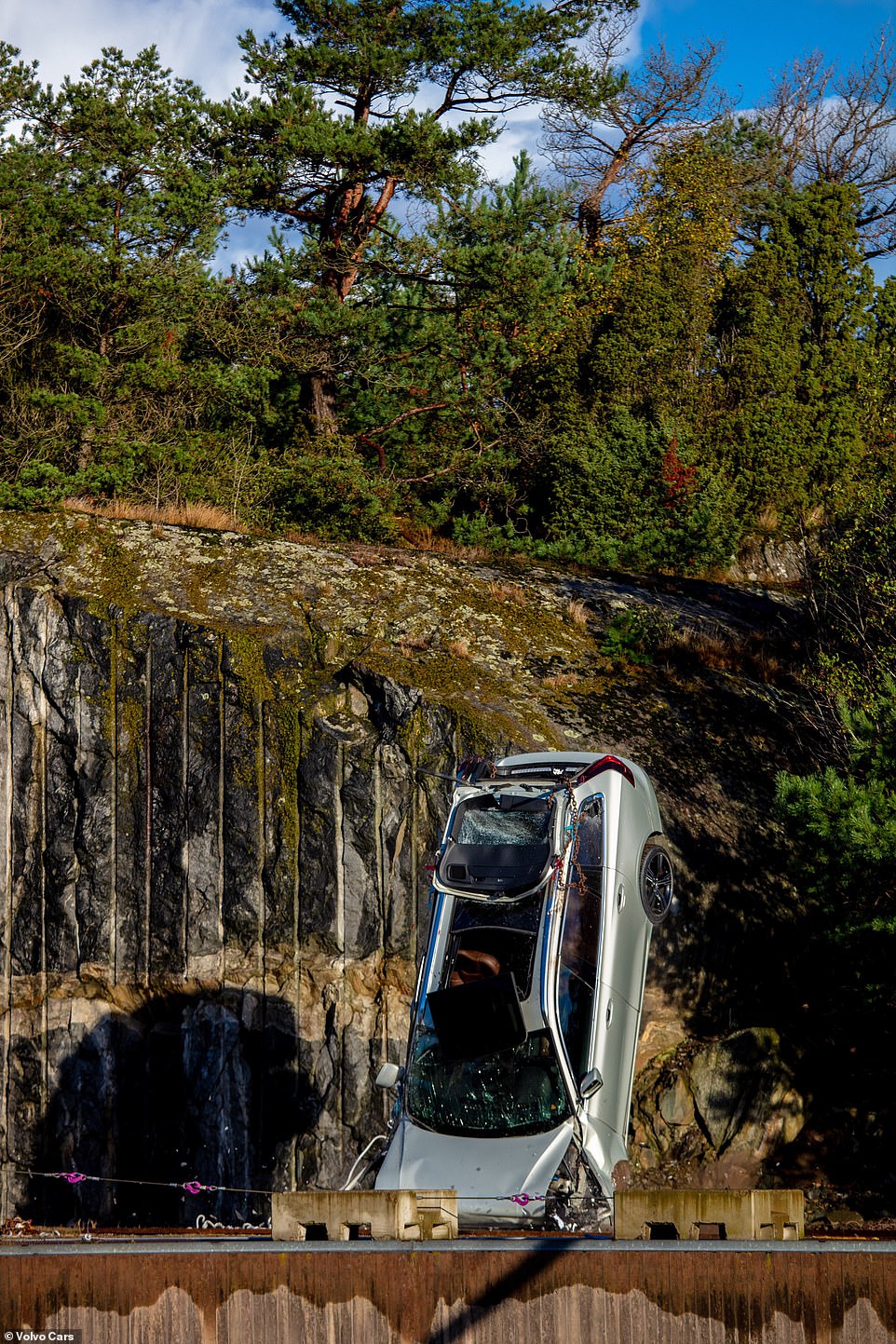 Volvo has its own crash-test laboratory, but is unable to simulate the most extreme crashes that occur on the road. The drop test from cranes are designed to replicate the damage caused if a vehicle was travelling at very high speeds and hit a truck 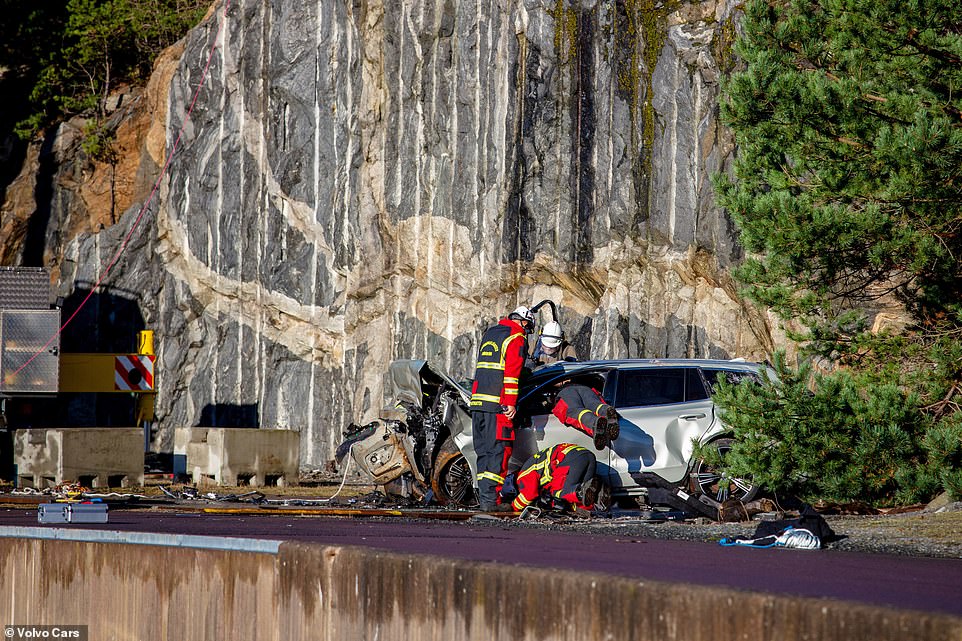 ‘We have been working closely together with the Swedish rescue services for many years,’ says Håkan Gustafson, a senior investigator with the Volvo Cars Traffic Accident Research Team.

All the findings from the drop tests have been collated and will be published in an extensive research report that will be made available free of use to rescue workers around the world, allowing them to benefit from the findings and further develop their life-saving capabilities. 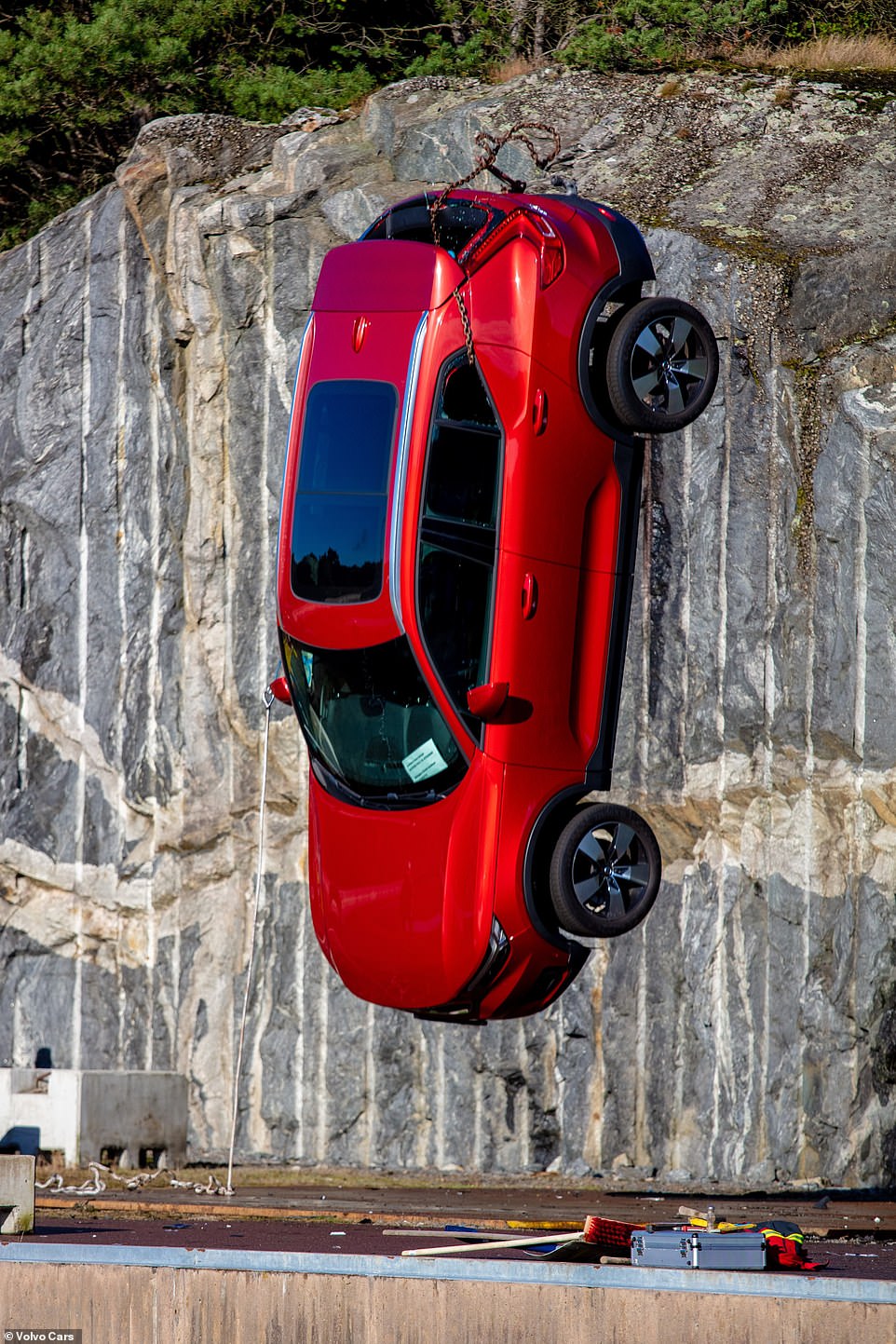 Of the 10 models used in the tests, some were the brand’s pricey SUVs, including this XC40 model 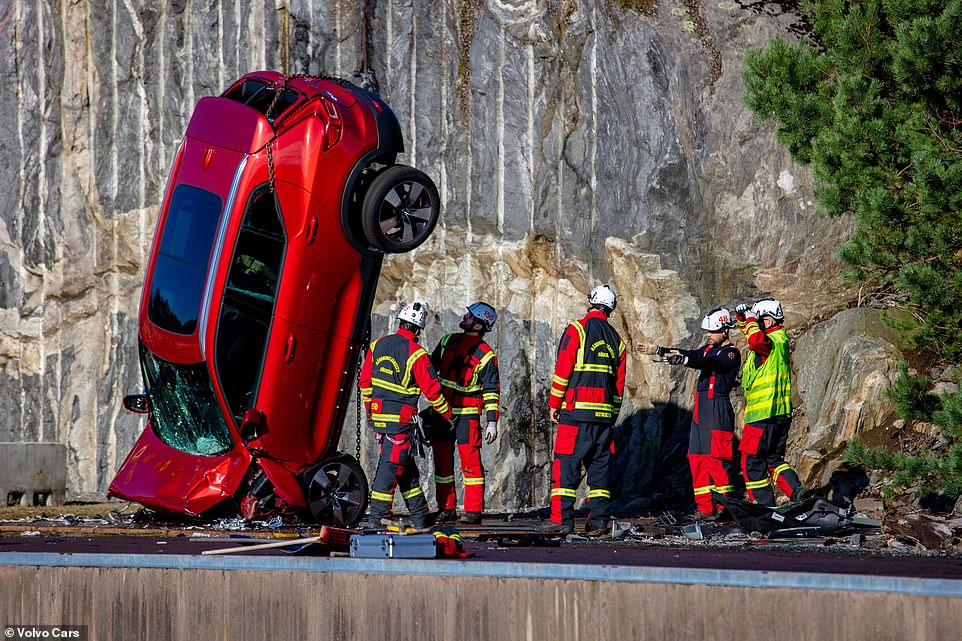 Extrication specialists often talk about the golden hour: the pivotal 60 minutes to release and get a patient to the hospital after the accident has happened. The twisted-up motors were ideal subjects for specialists to practice their techniques 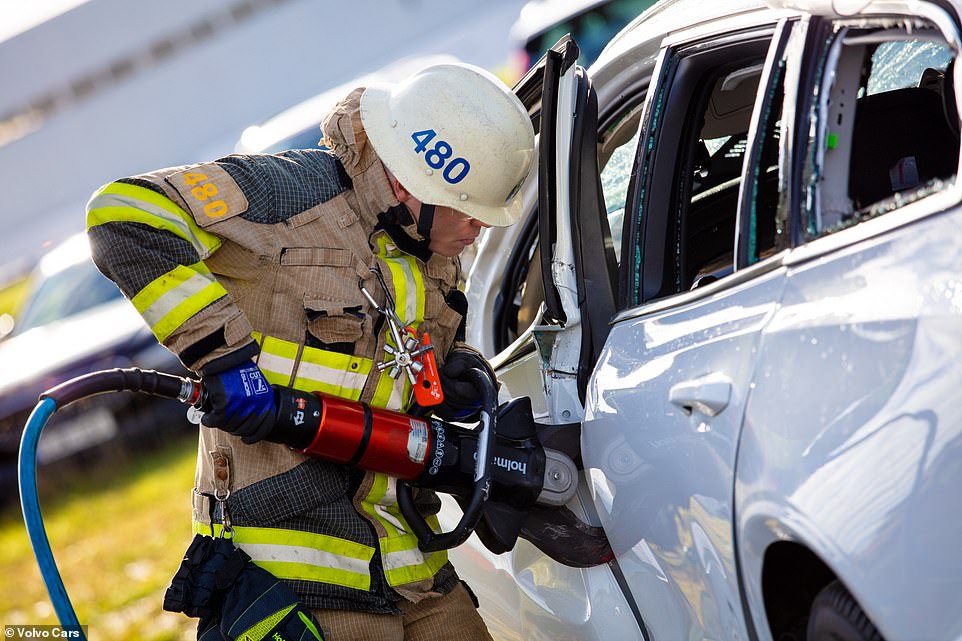 Emergency services often test their skills and equipment on cars recovered from scrapyard, though these are usually older vehicles that don’t have the same super-strength steel materials and specially-designed shells the latest models feature to withstand huge shunts

Usually, rescue workers get their training vehicles from scrapyards.

However, these cars are often up to two decades old with degraded and out-of-date steel strength, safety cage construction and overall durability – vastly difference to the latest machines

‘Normally we only crash cars in the laboratory, but this was the first time we dropped them from a crane,’ added Gustafson.

‘We knew we would see extreme deformations after the test, and we did this to give the rescue team a real challenge to work with.’

Volvo has in always tried to position itself at the forefront of vehicle safety.

Earlier this year it became the first manufacturer to fit speed limiters to all its new cars, restricting them to top speed of 112mph.

It has also introduced the ‘Care Key’ for parents to give to their new-driver children, which allows them to reprogramme the limiter to a lower top speed when the special key is in use.

Video footage shows the incredible stunt playing out, the surprising durability of the Volvo cars and the lengths extradition specialists need to go to in order to remove injured passengers and drivers from heavily-damaged motors. 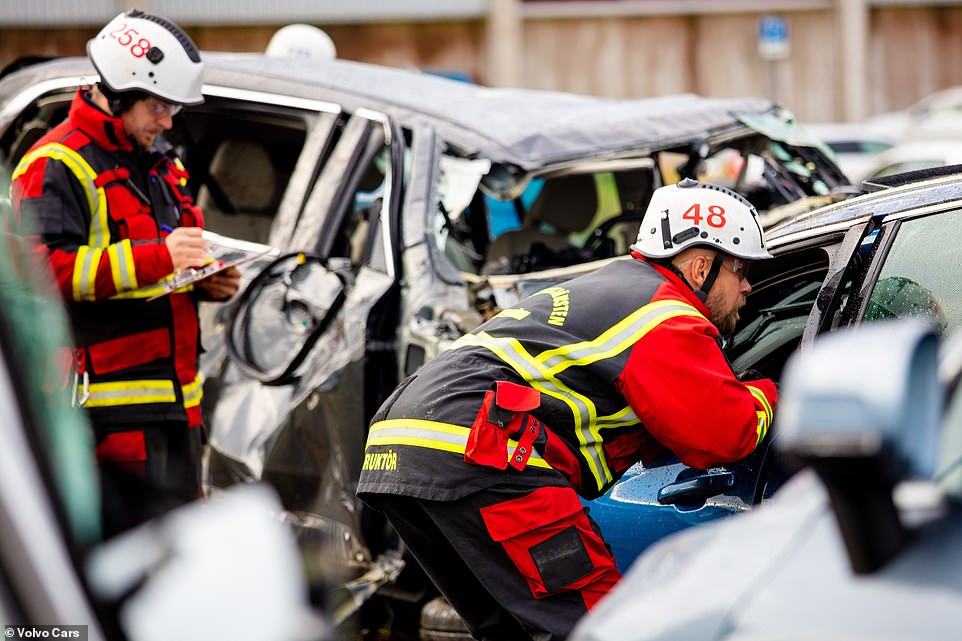 Volvo bosses said: ”We knew we would see extreme deformations after the test, and we did this to give the rescue team a real challenge to work with’ 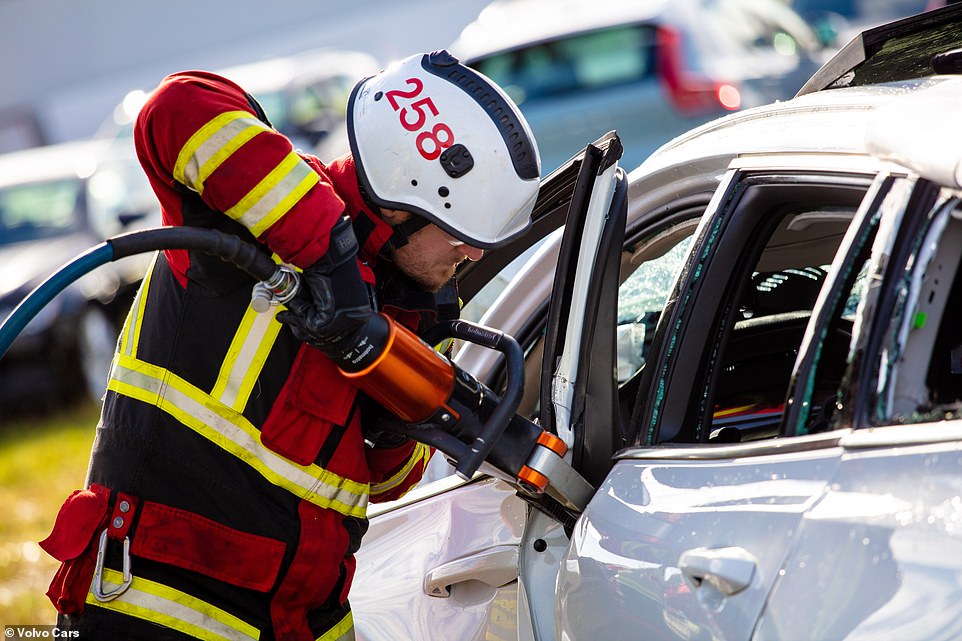 Volvo has in always tried to position itself at the forefront of vehicle safety. This latest test shows the extreme lengths the brand is willing to go to in order to be at the pinnacle of security