An unedifying spat about being a wife and mother has framed an historic state election where for the first time ever both major party leaders are women. 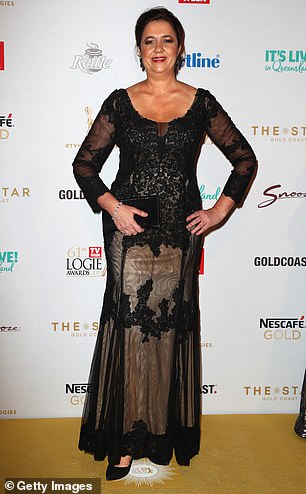 Before COVID-19 came to Australia, Liberal National Party leader Deb Frecklington caused uproar when she told a Sunday newspaper being married made her more grounded than her opponent.

Unlike 51-year-old Ms Palaszczuk, who is twice divorced with no children, Ms Frecklington is a married mother and has been campaigning for a hardline curfew on teenagers.

The 49-year-old former solicitor and law firm partner from Kingaroy, north of Brisbane, and her husband Jason have three daughters: Isabella, Elke and and Lucy.

Drawing a contrast with Ms Palaszczuk, who is single again, Ms Frecklington told News Corp in December 2019: ‘I have no choice but to remain grounded, because of Jason and the girls.

‘I can have a tough day but then I’ll get a call from one of my kids and you’ve got to deal with whatever’s going on in their lives.’

The comment was widely seen by commentators as an attempt to paint Ms Palaszczuk as a out of touch because she didn’t have children.

‘It’s surprising coming from a woman, actually, that’s what disappoints me,’ she told Daily Mail Australia.

‘It’s not just men who can trade in stereotypes – a woman’s marital status or whether she has children or doesn’t have children. 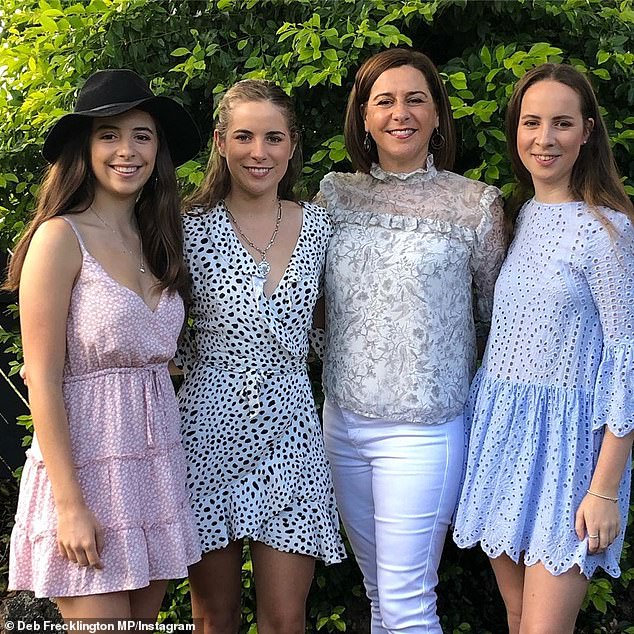 Unlike 51-year-old Ms Palaszczuk, who is twice divorced with no children, LNP leader Deb Frecklington is a married mother with three daughters Isabella, Elke and Lucy. The former solicitor made that point in a newspaper interview 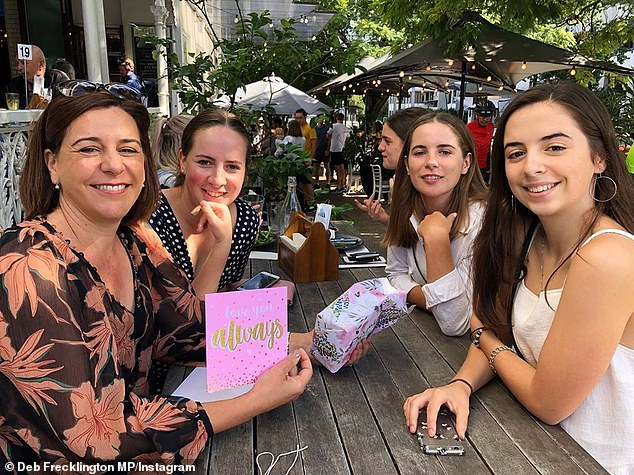 ‘We never judge men on the basis of whether they’re married or have kids or things like that, it doesn’t even come up.’

Why the Premier couldn’t have children

Making matters more insulting Ms Palaszczuk suffered endometriosis and was unable to have children, despite multiple attempts during her thirties.

Why Labor is the favourite to be re-elected

This would offset the loss of one or two seats in Townsville, where the LNP campaigned for a teen curfew to tackle youth crime

Even if Labor lost all three Townsville seats and gained nothing else, it could still form a minority government with two Greens MPs and Noosa climate change independent Sandy Bolton

They met in Canberra during the early 1990s when she was an adviser to Keating government minister David Beddall but her two-year marriage to Megalogenis, then a press gallery reporter with the Herald Sun, ended in 1998.

Ms Palaszczuk tried fruitlessly to have a child, via IVF, with her second husband Simon Every, a former Labor staffer, when she was 36 – only to suffer a miscarriage.

‘I can’t believe I actually did any of my jobs because it was completely draining,’ the Premier told the Australian Women’s Weekly in June 2017 as she campaigned for a second term.

Her second marriage ended in 2009, the year she became a minister after three years in Parliament and previous stints as a media adviser to state Labor ministers Tony McGrady and Dean Wells.

Why Labor is the favourite to be re-elected

Labor is the favourite to be narrowly re-elected, which would make Ms Palaszczuk the first Queensland premier to win a third, consecutive term since Peter Beattie in 2004.

Ms Palaszczuk’s former deputy Jackie Trad, from Labor’s dominant Left faction, is tipped to lose her cosmopolitan seat of South Brisbane to the Greens, following some political scandals, which would see the hard-left minor party have two MPs. 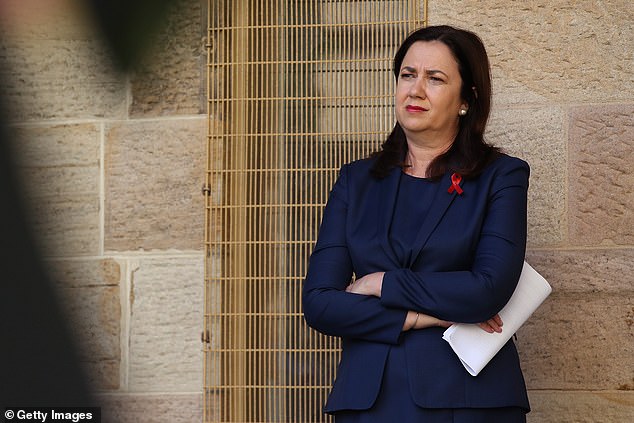 Making matters more insulting Ms Palaszczuk has endometriosis, which means was unable to have children, despite multiple attempts during her thirties

A Queensland Labor insider, however, told Daily Mail Australia the ALP was likely to have 48 seats for a majority in its own right.

The party activist predicted the ALP would lose one seat in Townsville but gain the marginal LNP-held Sunshine Coast seat of Caloundra as retirees worried about COVID-19 helped Labor win a seat it had never held before.

Labor was expected to also gain the neighbouring ultra-marginal LNP-held seat of Pumicestone, which covers the retiree haven of Bribie Island, where Sydney KIIS-FM radio star Kyle Sandilands grew up.

The ALP however is still vulnerable in three marginal seats in Townsville, including Mundingburra where minister Coralee O’Rourke is retiring, neighbouring Thuringowa and the city centre electorate of Townsville.

Even if the Opposition won three new seats in Townsville, the LNP isn’t faring so well in Brisbane and would be unlikely to cobble together a power-sharing arrangement with the three Katter’s Australian Party MPs and One Nation.

In a worse case scenario for Labor, it could still form a minority government with the Greens and possibly Noosa independent and climate change-focused MP Sandy Bolton. 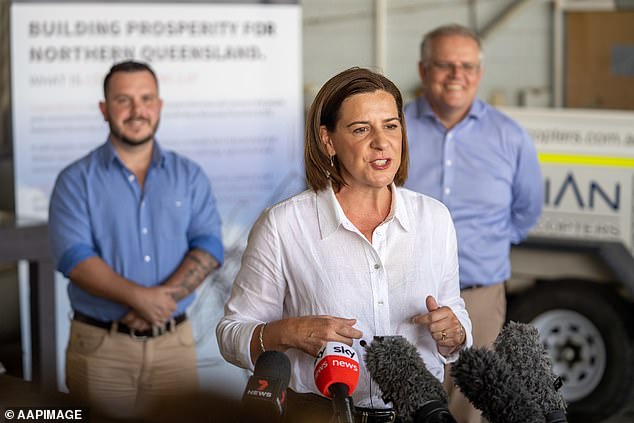 Ms Frecklington wants to introduce a $250 fine on parents if teenagers 17 and under are outside after 10pm. The LNP is hoping to pick up three seats in Townsville from Labor. She is pictured with Prime Minister Scott Morrison (right) and the federal Liberal MP for Herbert Phillip Thompson

Queensland will be Australia’s first state to go to an election during the coronavirus pandemic, following polls in the NT and the ACT in 2020.

Ms Palaszczuk’s decision to keep Queensland closed to all of New South Wales, except for a few regions in the state’s north near the border, has proven popular with voters, especially the elderly ones who don’t normally vote Labor.

Apart from slamming the Premier over an earlier ban on ACT, Ms Frecklington has broadly supported keeping Queensland closed to most of NSW in a bid to prevent a coronavirus outbreak.

In March 2012, Ms Palaszczuk became Queensland Labor leader after her boss Anna Bligh was defeated in a landslide at the hands of LNP leader and former Brisbane lord mayor Campbell Newman.

In that election, Ms Palaszczuk held on to her multicultural southern Brisbane seat of Inala, which had been one of Labor’s safest and was previously held by her father Henry Palaszczuk, a former state government minister.

Former barrister Cameron Dick had been the favourite to take over as Labor leader but he had lost his inner-city seat of Greenslopes, making Ms Palaszczuk the only viable contender from the party’s Right faction, which then had the numbers in the party.

Ms Palaszczuk led a team of just seven Labor MPs, versus 78 for the new LNP government which had the biggest landslide ever seen in Australia.

Despite those overwhelming odds, she managed to become Premier in February 2015 after the one-term Newman government slashed the public service and fought with doctors and lawyers.

Ms Frecklington, who was a junior minister in the previous LNP government, late last year described her opponent as ‘Princess Palaszczuk’ for wearing designer clothing.

‘She has deliberately changed her image — the whole ‘Princess Palaszczuk’ is pretty obvious — but I haven’t changed mine,’ she said. 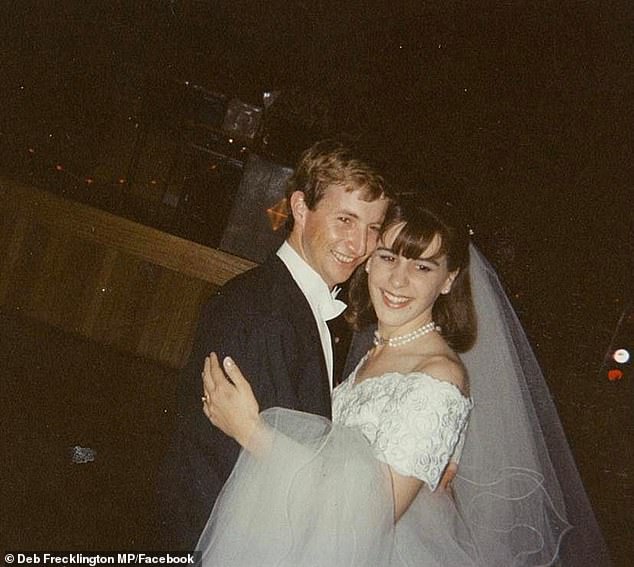 Ms Frecklington is now the fourth leader Ms Palaszczuk has stared down, following an LNP revolving door that has included Mr Newman, Lawrence Springborg and Tim Nicholls. The LNP leader is pictured on her wedding day with her husband Jason

The LNP leader has campaigned for a curfew, proposing a $250 fine on parents if their children aged up to 17 are outside after 10pm. Kids under 15 would have to be inside by 8pm.

This controversial policy may well prove popular in three marginal Labor-held seats in Townsville where crime is more of an issue but would be unlikely to see the LNP pick up seats in Brisbane. 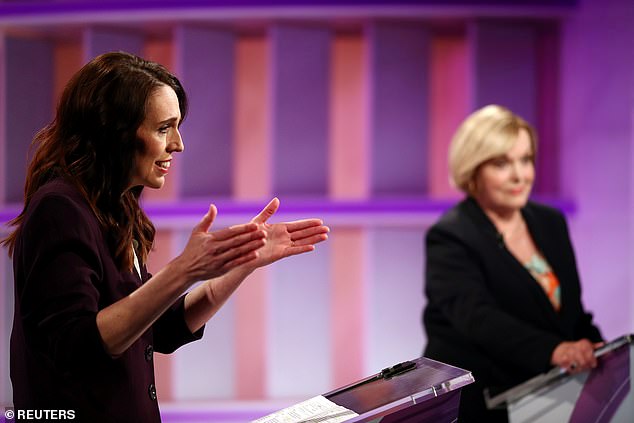 The Northern Territory had two female leaders between 2005 and January 2008 when Labor chief minister Clare Martin faced off against Country Liberal Party leader Jodeen Carney but they didn’t go head-to-head in an election.

Australia’s first state election with two female leaders will be occurring 91 years after teacher Irene Longman made history in 1929 as the first woman elected to the Queensland Parliament.

Professor Lumby said successful female leaders had demonstrated they could be both decisive and emphatic.

‘Without wanting to stereotype by gender, one of the things about having women in the mix of leadership is it may mean we’re rethinking the qualities we look for in leaders,’ she said.