A young woman who was left unconscious after an attack by her ex on her work’s Christmas party has told how her dress helped to snare her abuser.

Paige Middlehurst, 25, from Cumbria, was brutally assaulted by her partner, Declan Clough, after he accused her of flirting with other men at her work’s Christmas bash in 2018.

He then ordered Paige to hide her ruined Christmas dress in the boot of her car – so that her family would not see the bloodstains.

But she bravely went to the police and Clough, who admitted causing actual bodily harm, was last week handed a six-month suspended sentence.

‘Declan seemed lovely at first; he was funny and very attentive,’ explained Paige, a customer services advisor. ‘He was romantic too, taking me out for dinner and we went away for weekends. But he was also extremely controlling. 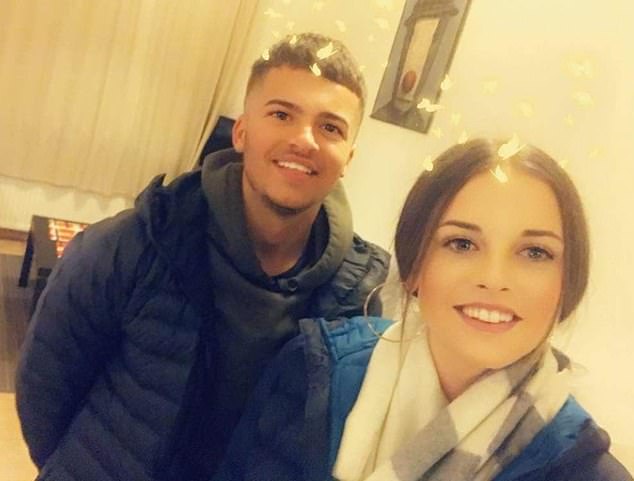 Paige Middlehurst, 25, from Cumbria, was brutally assaulted by her partner, Declan Clough, after he accused her of flirting with other men at her work’s Christmas bash. Pictured, together 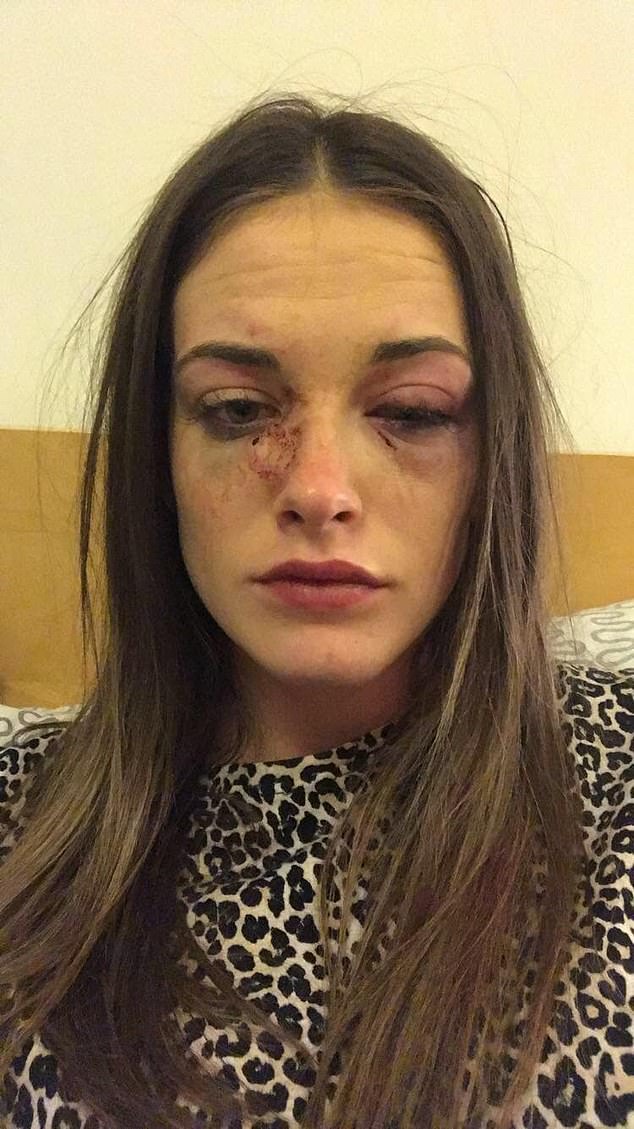 The customer services advisor bravely went to the police and Clough was last week handed a suspended sentence. Pictured, the injuries Paige sustained in the attack 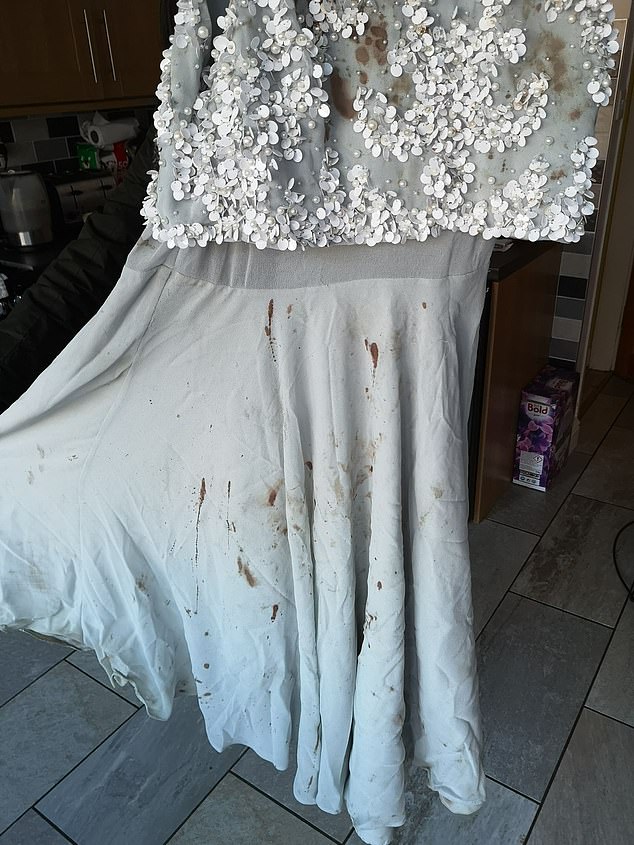 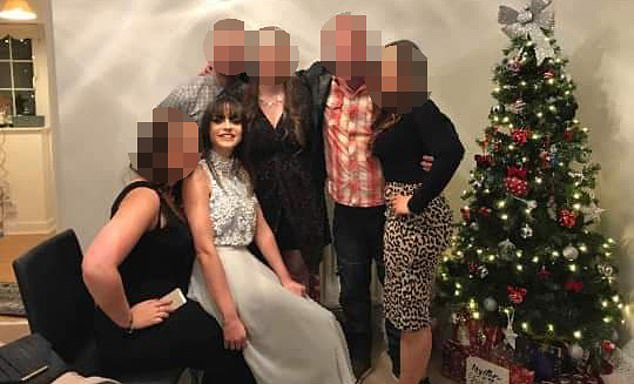 Paige (pictured with work colleagues) told how her phone died part-way through the evening and when Clough got hold of her, he was ‘furious’ with her

‘He didn’t let me see or speak to any other male friends, even though it was just platonic. He even made me delete a picture of Anthony Joshua off my Facebook, because he was jealous of him too.

‘As our relationship went on, he became violent, but I couldn’t bring myself to speak to the police. The attack at Christmas was the final straw, and I knew I had to get help.

‘I spent that Christmas in bed, anxious and depressed. This year, I plan to party all the way through. I’ve moved on and I won’t let him ruin my life.

‘I hope other women will learn from my story. It’s important to walk away – whilst you still can.’ 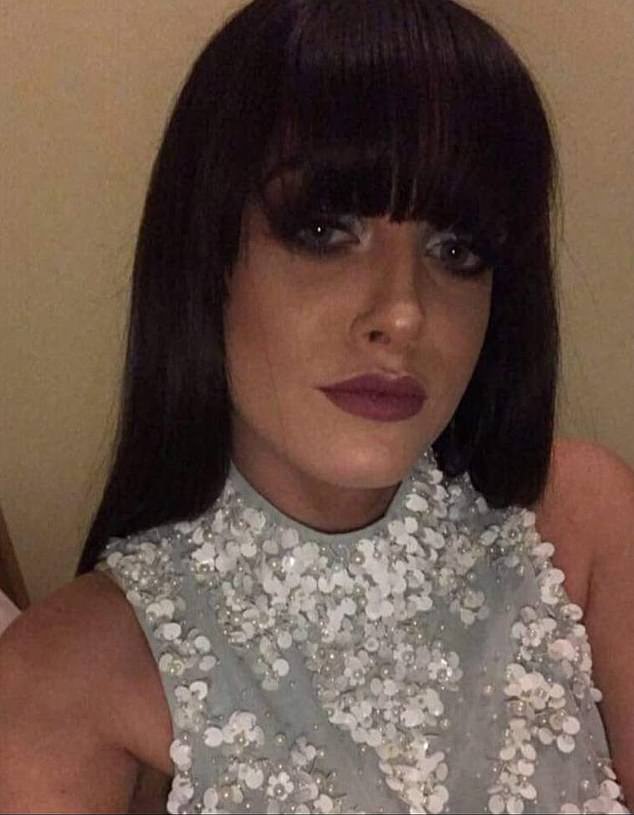 Paige (pictured, in her work Christmas dress) said that attack at Christmas was the final straw, and she knew she had to get help 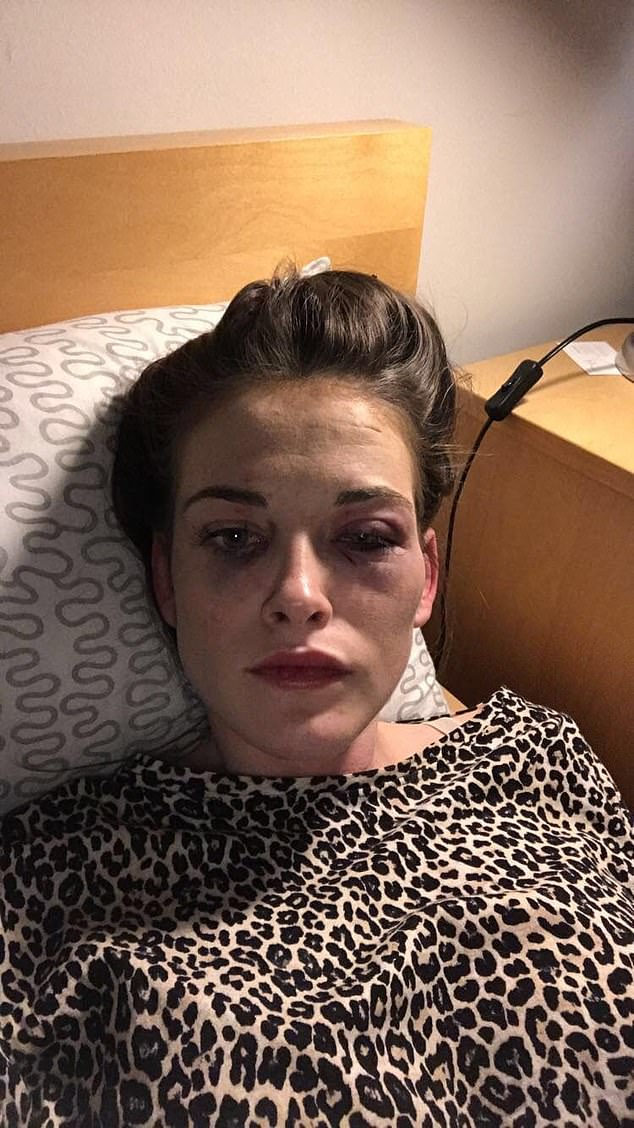 Paige, pictured with the injuries following the brutal attack, said Clough could also be controlling and aggressive 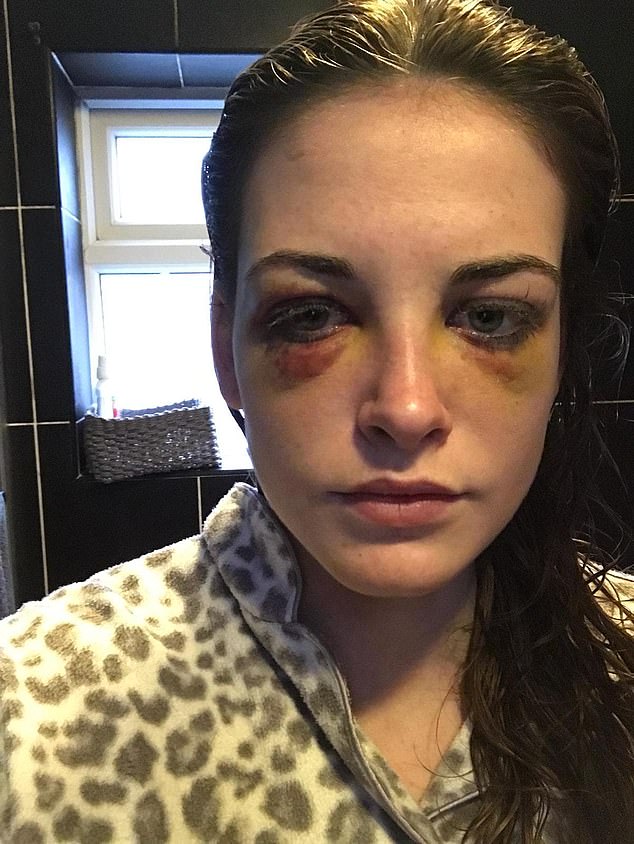 The 25-year-old recalled how her ex wouldn’t allow her to see her friends and wanted to keep her inside, ‘all for him’ 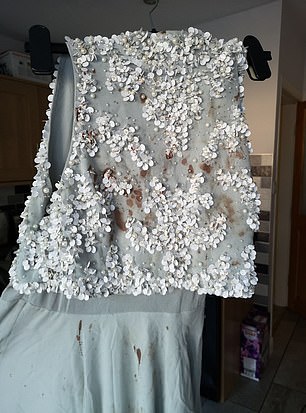 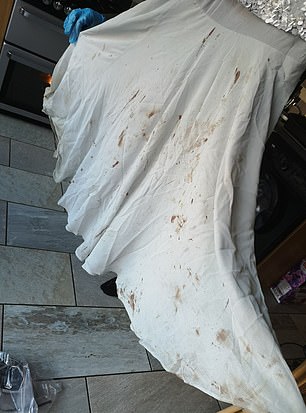 Paige paid £90 on a new dress for Christmas for the Christmas party – but it ended up covered in blood stains (pictured, left and right)

Paige and Declan met in June 2018 in Barrow in Furness, Cumbria, and by August that year, their relationship was serious.

‘Some of my friends didn’t like Declan,’ she explained. ‘My brother warned me against him. But I was head over heels in love and I didn’t listen because I felt they didn’t know him like I did.

‘He whisked me away to Edinburgh for my birthday, he took me out and he could be very affectionate and thoughtful.’

But Clough could also be controlling and aggressive.

‘He didn’t like me going anywhere without him,’ said Paige. ‘I wasn’t allowed to see my friends. He wanted to keep me inside, all for him.

‘I wasn’t allowed any male friends on social media and when I once posted a photo of Anthony Joshua, he flipped and made me delete it.

‘In arguments when he was drunk he became violent. He would accuse me of cheating on him even though there was absolutely no basis at all to his claims. 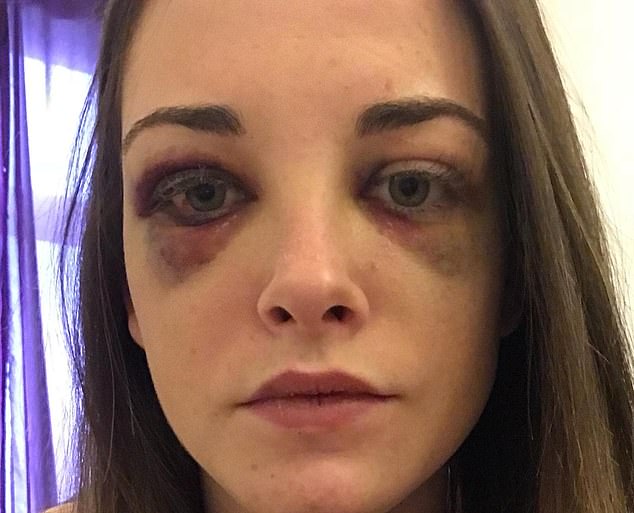 Paige said her ex would accuse her of cheating on him even though there was absolutely no basis at all to his claims. Pictured, with the injuries she sustained in the attack 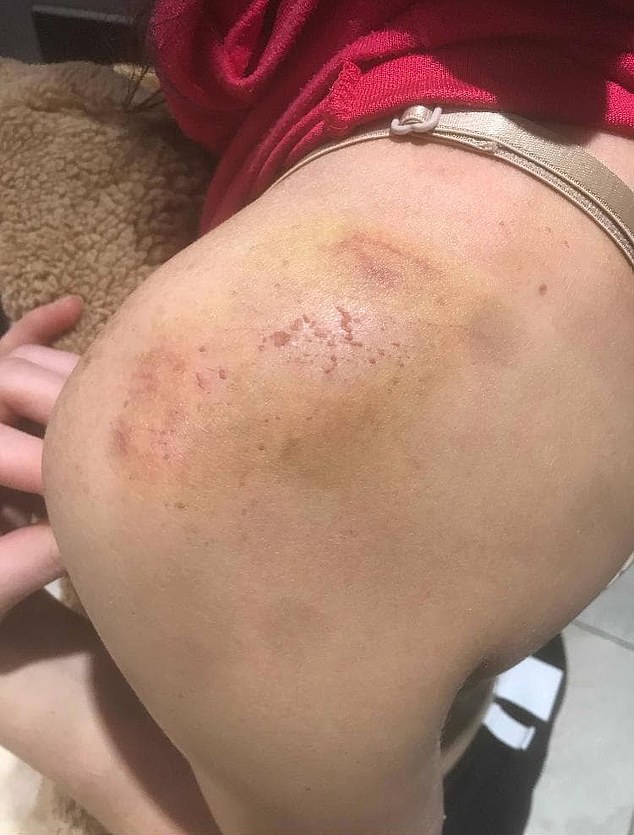 Paige told how when she eventually met up with Clough later that night he accused her of cheating on him at the Christmas do and he ran at her and punched her. Pictured, Paige’s bruising 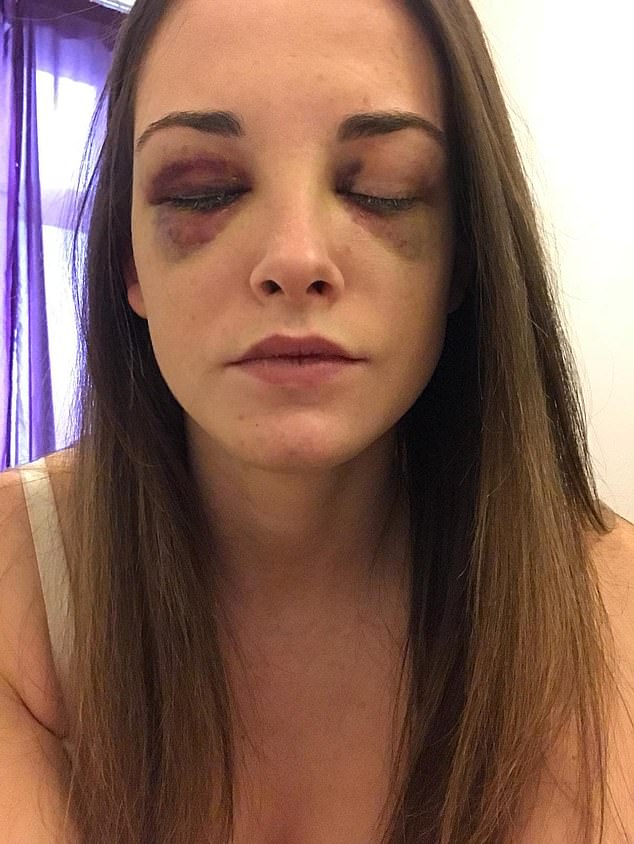 Paige (pictured, her injuries) bravely went to the police a week before Christmas 2018, and Declan was arrested 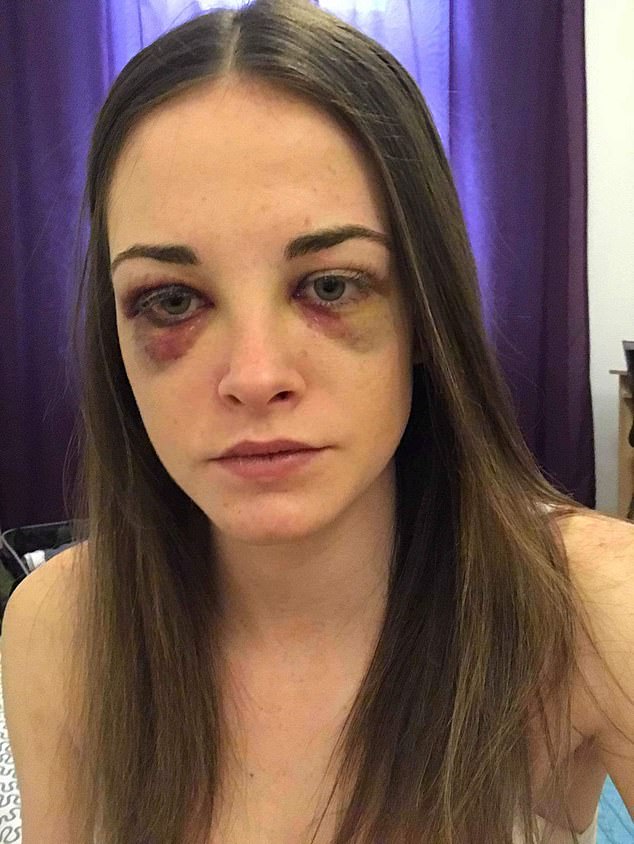 ‘I was so ashamed of what he was doing that I kept it to myself. He was very apologetic afterwards and would guilt-trip me, saying he would end up in prison if I ever told anyone.

‘I just couldn’t see a way out. I thought I was protecting him but actually he was controlling me and abusing me.’

In December 2018, Paige went on a Christmas works night out with colleagues.

‘I was really looking forward to it and I’d spent £90 on a new dress which I loved,’ she recalled. ‘Declan made me promise to keep in touch with him all night and to answer his messages.

‘But my phone died part-way through the evening. When I eventually got hold of him he was furious with me.

‘He told me to meet him on the bridge, near my home. When I got there, he accused me of cheating on him at the Christmas do and he ran at me and punched me, right in the middle of the road.

‘I managed to get up but he hit me again and this time I was unconscious. When I came round, he was dragging me to the side of the road.

‘I was covered in blood. He cleaned me up and took my dress and hid it in the boot of the car, where nobody would see it. 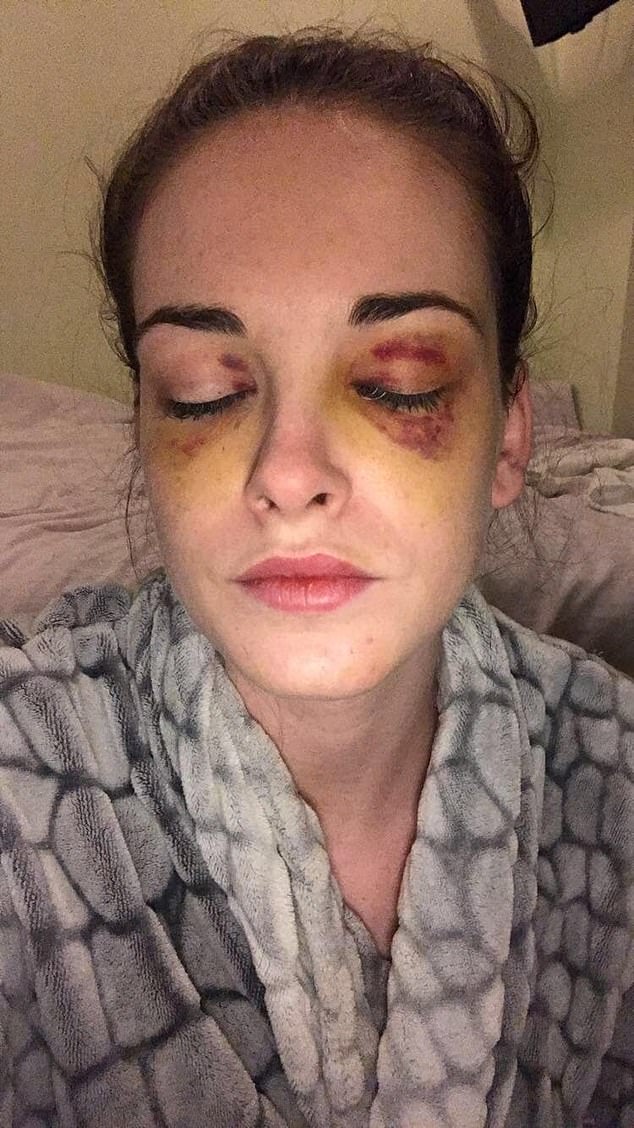 Paige spent the Christmas after Clough’s arrest hidden away in bed because she ‘couldn’t face the world.’ Pictured, her injuries 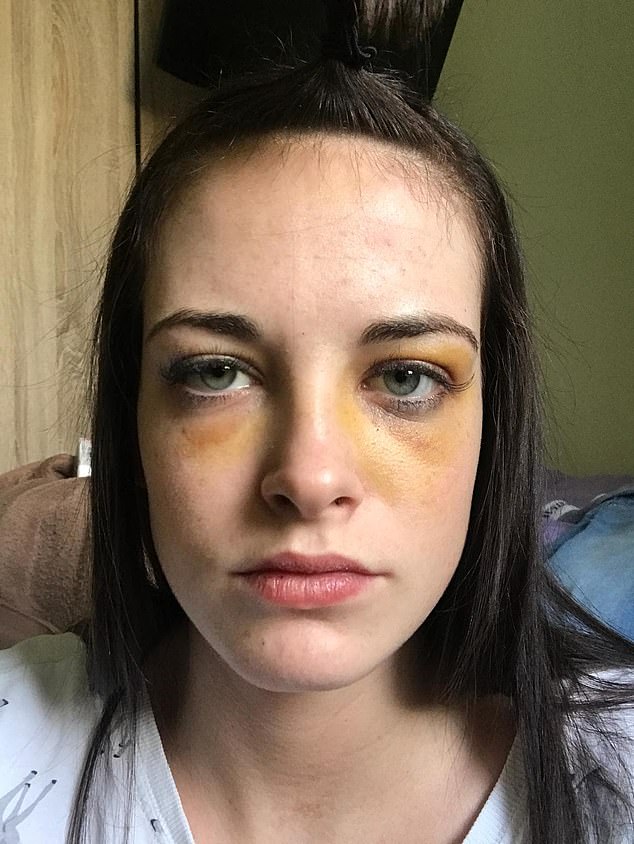 Paige said she is still coping with the physical effects of the abuse and has nerve damage to her face. Pictured, injuries after the brutal attack

‘I was devastated. I felt like I couldn’t keep on lying to my family, hiding my bruises, and smiling all through Christmas, when inside my heart was breaking.’

Paige bravely went to the police a week before Christmas 2018, and Declan was arrested.

Clough was also charged with coercive and controlling behaviour. But prosecutors took the decision to allow the charge to lie on file after he admitted a more serious offence.

He was handed a six month suspended sentence.

‘I am still coping with the physical effects of the abuse,’ said Paige. ‘I have nerve damage to my face and my back is painful.

‘But I feel proud that I have walked away from him and I want other girls in my situation to do the same. I know now that the shame is his – not mine. I did absolutely nothing wrong.

‘I spent that Christmas after his arrest hidden away in bed. I couldn’t face the world. This year, I plan to celebrate in style. I have moved on and I won’t ever let a man treat me like that again.’