Bitcoin billionaire’s the Winklevoss twins have blamed pandemic-driven inequality for the rise of the Reddit GameStop mob.

Cameron and Tyler Winklevoss, who famously sued Facebook’s Mark Zuckerberg, said the shutdown of viral retail investing was tied to a broader curtailing of liberty.

It comes after cheap trading platform Robinhood, favored by meme-driven investors, halted buy orders on 13 securities, including GameStop on Thursday.

‘I think if anyone thinks this is about just one stock or two stocks, they’re mistaken,’ Tyler told CNBC.

‘We won’t pass a stimulus bill on time. And oh, by the way, now you can’t trade. What’s the next thing they’re going to control and say you can’t do?’ 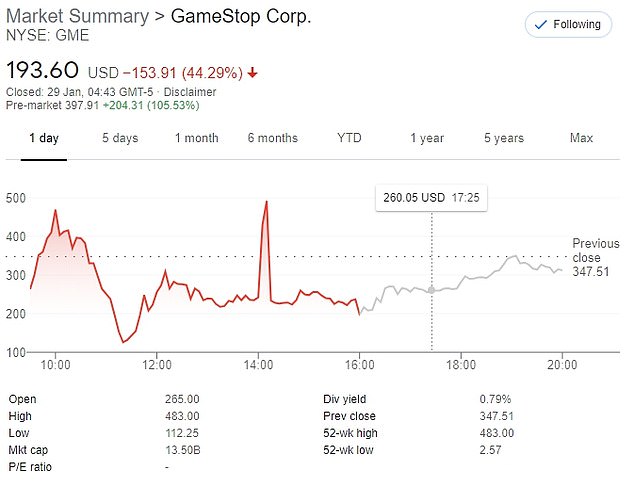 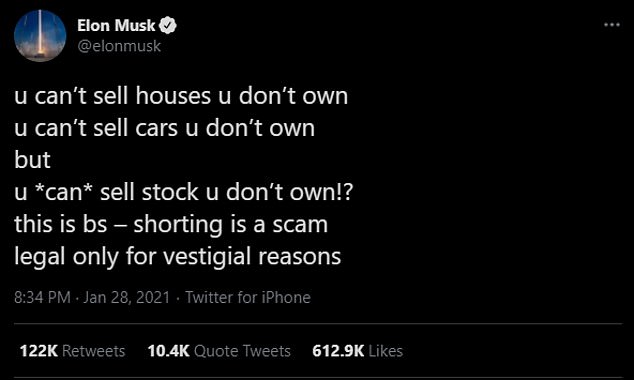 The Winklevoss twins weren’t alone in their condemnation.

Elon Musk last night took to Twitter once again to lend his support to WallStreetBets.

He is referring to the practice of shorting stocks where shares are sold in advance of acquiring them to make profit. A trader essentially bets on stock falling in price.

The meme-driven ‘short squeezers’ have capitalised on billionaire hedge funds with ‘short books’ – i.e. they are overexposed to sudden price surges in low value stocks.

The Winklevoss twins were unable to point to a particular politician or body which was orchestrating the crackdown on the retail investors but said ‘the regulators’ were ‘leaning on’ trading platforms.

‘OK so who made the call to Robinhood? Do you think Robinhood woke up and made the decision themselves to halt the tickers?’ Tyler asked the host.

Fortt replied: ‘I don’t know but I’m not claiming to. You just said that the authorities are doing all of these things.’

Tyler replied that while he didn’t know who made the decision to clampdown on trading, he didn’t believe it came from Robinhood.

‘And I think it’s a fair question,’ the Winklevoss twin said. ‘The fact that you’re the journalist, you should be asking, not me.

‘Who do you have from Robinhood on to question? You haven’t done your job in emailing Robinhood and asking them.’

An incensed Fortt retorted: ‘If I haven’t done my job, you’re implying I’m wasting my time talking to you.’

Robinhood CEO Vlad Tenev, 33, last night said that the firm’s reasons for limiting trades on 13 securities, including GameStop, had nothing to do with directions from any third party such as big hedge funds or the Securities and Trade Commission (SEC).

He said it was because, as a brokerage firm, they needed to meet certain financial requirements such as SEC net capital requirements and clearing house deposits. 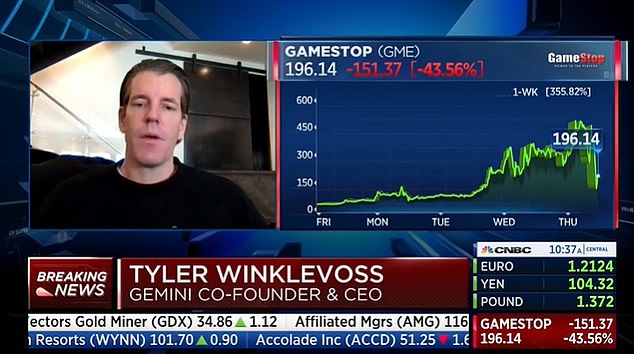 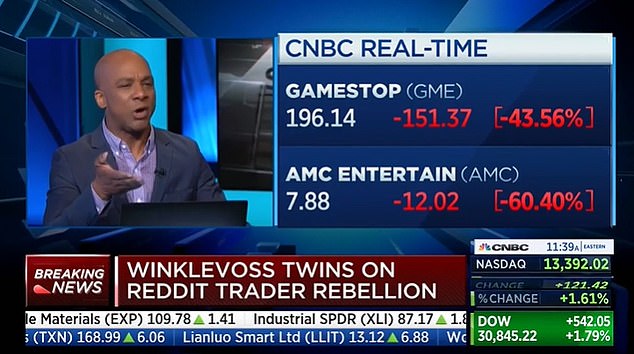 An outraged Jon Fortt replied: ‘I don’t know but I’m not claiming to. You just said that the authorities are doing all of these things.’ 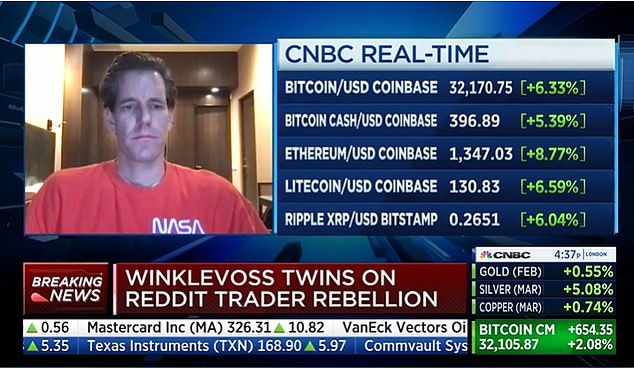 Cameron Winklevoss was appearing on the broadcast with brother Tyler

‘In order to protect the firm and protect our customers we had to limit buying in these stocks,’ he said.

He said they wanted to create ‘a stable and reliable platform’, and were confident that was the case.

He was asked whether there was a problem within the firm.

‘There’s no liquidity problem’ he said. ‘We’re doing what we can to allow buying and remove these restrictions in the morning.’

He said the app had had ‘unprecedented interest’.

GameStop shares soared again this morning in pre-market trading as Robinhood lifted its restrictions on the unlikely stock which has surged by 1,700 per cent this month.

Robinhood even started selling its users’ stock without their permission on Thursday after market volatility put the White House on alert. 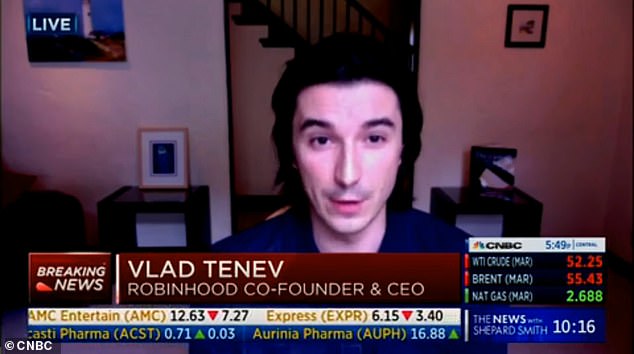 Vlad Tenev, the CEO and co-founder of Robinhood, on Thursday night defended his company’s actions

‘We had to make a very difficult decision. It’s been a challenging day,’ Tenev told MSNBC.

Robinhood cited ‘recent volatility’ for the decision to block users from buying stock in GameStop and 12 other companies which the Reddit users had selected for ‘short squeezes.’

They’ve been hit with a class-action lawsuit accusing them of siding with Wall Street by blocking investors’ ability to buy shares.

The firm borrowed $1 billion from its investors Thursday as their existing infrastructure struggled to meet the demands of millions of new users who have downloaded their app in recent days.

Baiju Bhatt and Vladimir Tenev founded Robinhood in 2013, saying they were inspired by the Occupy Wall Street protests.

Robinhood is a free stock trading app that allows users to easily load cash and buy and sell stocks and options.

The popular app boasts 13 million users, and reportedly about half of them own shares of GameStop.

On Thursday, Robinhood restricted the purchase of shares in GameStop and several other stocks popular on the Reddit forum WallStreetBets. 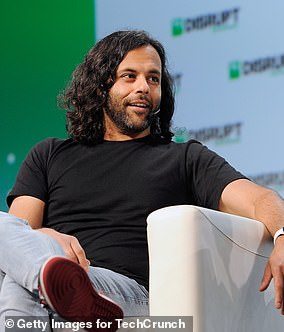 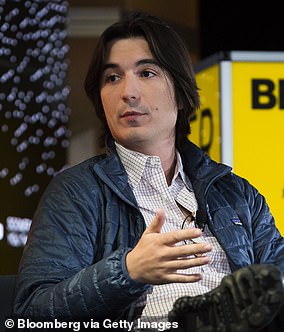 Baiju Bhatt (left) and Vladimir Tenev (right) founded Robinhood in 2013, saying they were inspired by the Occupy Wall Street protests

Traders who own the stocks are still able to hold or sell them on Robinhood, but no users are being allowed to purchase new shares.

The move drew furious condemnation across the political spectrum, and accusations that Robinhood is coming to the aid of hedge funds at the expense of small investors.

Bhatt and Tenev met while they were students at Stanford University, and had previously collaborated to start a high-frequency trading firm and a company selling software to professional traders.

Both have an estimated net worth of about $1 billion, thanks to their stakes in Robinhood, which is valued at $11.7 billion.

Last month, the SEC ruled that Robinhood had misled its customers about how it was paid by Wall Street firms for passing along customer trades and that the start-up had made money at the expense of its customers.

Robinhood agreed to pay a $65 million fine to settle the charges, without admitting or denying guilt.

Bhatt, 36, is the son of Indian immigrants, and earned a bachelor’s degree in physics and master’s in mathematics from Stanford.

Tenev, 34, was born in Bulgaria and moved to the US with his family when he was five. He earned a bachelor’s in mathematics from Stanford and dropped out of a PhD program to team up with Bhatt.