Offices saw more than 500 Covid outbreaks in six months last year and at least 60 already in the third lockdown as workplace outbreaks have surged despite a Government order to work from home.

There were hundreds of incidents, defined as two or more connected cases where Covid is suspected or confirmed, in offices in the second half of 2020 between July and December, a BBC investigation found.

Data revealed that this figure was more than the combined total of outbreaks across supermarkets, construction sites, warehouses, restaurants and cafes.

Professor Phil Taylor from the University of Strathclyde told how air-conditioning, little social distancing and hot-desking in offices makes for a ‘toxic combination’ for Covid-19 to spread.

Separate Public Health England data has revealed that outbreaks across workplaces in general have risen by 45 per cent during the current lockdown that came into force on January 5.

The figures show that workplaces which included warehouses, factories and offices, ranked second only to care homes on the list of places with the most outbreaks, with 811 incidents across four weeks from December 28 to January 24.

There were more outbreaks at work than at hospitals, schools or prisons, the data showed. 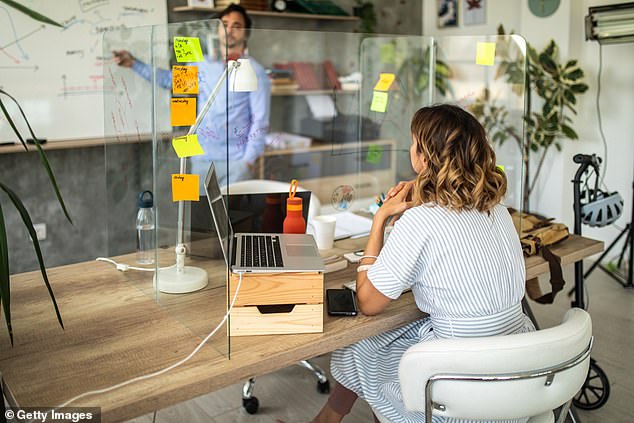 Data from a BBC investigation revealed that the Health and Safety Executive received more almost 4,000 Covid-related complaints about work places in January alone.

Professor Cath Noakes, who sits on the government’s Scientific Advisory Group for Emergencies (SAGE) committee, revealed how poorly ventilated could increase the risk of catching coronavirus from airborne particles by a staggering 70 per cent.

A call centre worker from Bristol, who contracted the virus this month and passed it onto his girlfriend, believes he got ill at work.

The anonymous employee told the BBC that there were up to 30 people work on his floor where workers are still hot-desking.

Separate data from Public Health England showed that workplace Covid outbreaks remain high even though most people have been told to work from home.

Boris Johnson plunged the country into a third national lockdown on January 5 which ordered everyone to work from home if they can.

The criteria on who can go to work applies only to people who ‘absolutely cannot work from home’. 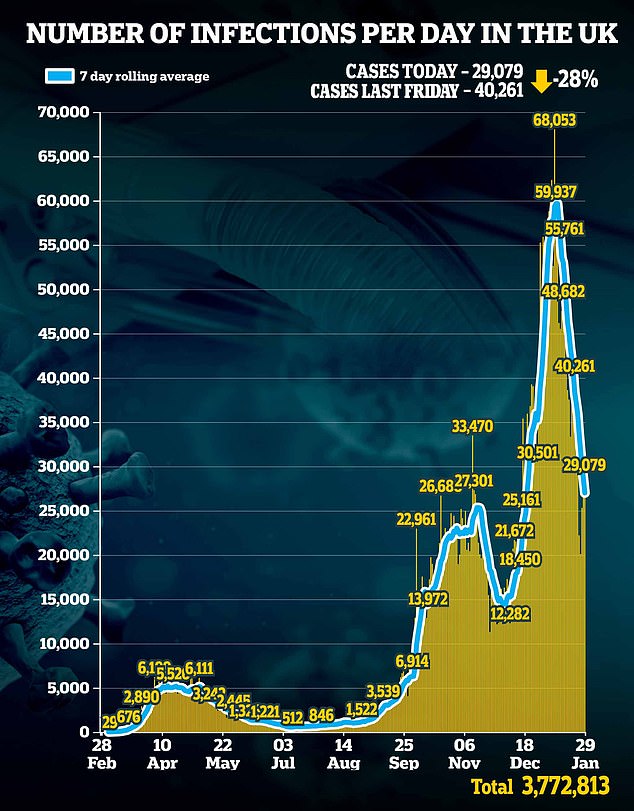 Offices introduced measures such as rapid testing of employees, social distancing measures and screens between workstations.

The Government’s official website states this category includes – but is not limited to – ‘people who work within critical national infrastructure, construction or manufacturing that require in-person attendance’.

‘You may only leave your home for work if you cannot reasonably work from home,’ it states.

Roles such as these – which include water service and telecoms workers – are ‘essential to keeping the country operating and supporting sectors and employers’, guidance states.

A Government spokesperson said: ‘We continue to reinforce the stay at home messaging to businesses and the overwhelming majority are doing the right thing, but we need all employers to act responsibly and take every possible step to help their employees work from home.’

Prisons have seen outbreaks more than double during the current lockdown despite social visits being suspended in England with a peak of 18 over the last two weeks.

Care homes had seen the most amount of outbreaks with 3,140 across institutions in England.

However the outbreaks in homes, which are concerning because the residents are so at risk from the disease, have fallen by three per cent during the current lockdown curbs.

It comes as Britain confirmed another week-on drop in coronavirus cases yesterday with 24 per cent fewer than last Thursday.

The number, although slightly higher than Wednesday’s, is another sign that the third national lockdown in England is working and infections are coming under control.

COVID CASES FALL IN 97% OF ENGLAND

All but five local authorities in England saw coronavirus infections fall last week, official data shows in the clearest sign yet that cases are trending downwards across the country during lockdown.

Public Health England figures published today reveal 144 out of 149 areas (97 per cent) recorded a drop in weekly positive tests in the seven days up to January 24, confirming that cases are now falling in all regions of England.

Infection rates plunged by more than a third in 40 local authorities and fell sharply by more than a quarter in another 48 areas. Cases are down in every age group, in another positive sign in Britain’s Covid fight.

The PHE report shows that, on the whole, cases are plummeting fastest in the South East and London, which became the UK’s Covid epicentres after an outbreak of the highly infectious Kent strain in autumn.

Infections in these regions fell sooner and faster during the national shutdown because they were put under tough Tier 4 curbs in December while the rest of the country enjoyed more freedoms, which gave them a head-start, and their infection rates are falling from higher peaks.

But the figures now show that areas in the North of England, Yorkshire and the Midlands have started to catch up, with places such as York (-38 per cent), Liverpool (-35 per cent) and Manchester (-26 per cent) seeing significant weekly drops.

Scientists had been warning for weeks that the national shutdown was having an effect on some but not all parts of England. But the latest promising data suggests the draconian measures are having their desired impact everywhere now. 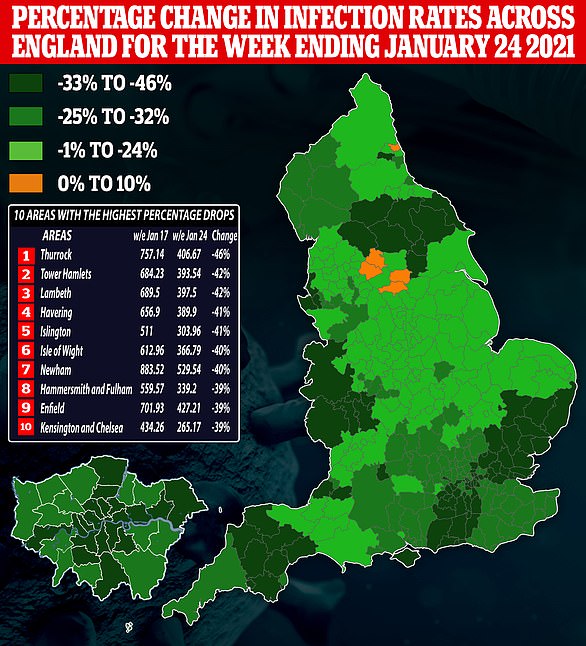 All but five local authorities in England saw coronavirus infections fall last week, official data shows in the clearest sign yet that cases are trending downwards across the country during lockdown

The biggest drop in infection rates last week was recorded in Thurrock, Essex, where the weekly case rate was slashed from 757 per 100,000 people to 406, a fall of more than 46 per cent. Eight London boroughs saw similar week-on-week falls, with Tower Hamlets and Lambeth each recording a 42 per cent decrease. Case rates there are now 393 per 100,000 and 397.5, respectively.

Havering and Islington both saw rates tumble by 41 per cent, in Newham it fell by 40 per cent and in Enfield, Hammersmith and Fulham and Kensington and Chelsea, there was a 39 per cent decrease. Rounding out the top 10 was the Isle of Wight, where cases went from 612.96 per 100,000 to 366.79, the equivalent of a 40 per cent fall.

Only five local authorities  — mostly in Yorkshire — saw positive Covid tests continue to rise in the past week, but the increases were relatively small. Wakefield, in West Yorkshire, suffered the biggest increase at 9 per cent, with the rate climbing from 229 per 100,000 to 250. In Bradford, also in West Yorkshire, the rate went from 274 to 292.34, a rise of 6 per cent.