Police could be powerless to stop people flying off on holiday during coronavirus lockdown,

Police may be powerless to stop tourists leaving the country, a top officer suggested yesterday.

But he suggested officers may not be given any new powers to stop holidaymakers getting on flights. They could, however, arrest someone if they were caught flouting domestic restrictions on travelling during lockdown and refused to return home.

Mr Hewitt spoke out as figures revealed that just 3 per cent of travellers investigated for flouting self-isolation have been fined. 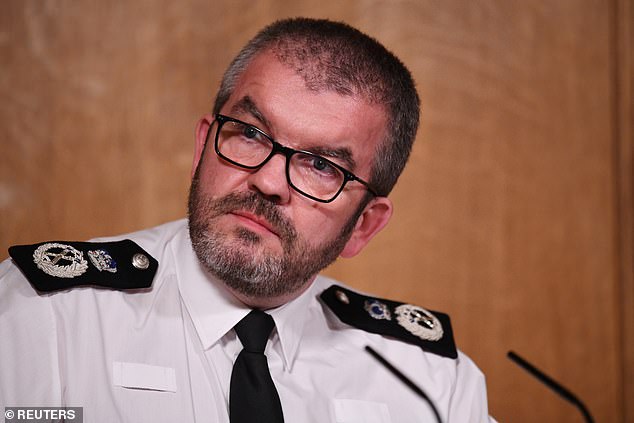 Martin Hewitt, chairman of the National Police Chiefs’ Council, says forces will continue to carry out Covid patrols at airports

Of the 11,003 examined so far, only 335 were penalised. The others were either uncontactable or obeyed the restrictions.

Home Secretary Priti Patel announced this week that anyone attempting to holiday abroad will be stopped at the border, sent home and risk a £200 fine.

Travellers will be expected to fill out a ‘declaration’ form explaining why they need to go abroad before they leave home which will then be checked by airlines, police and Border Force officers.

Mr Hewitt said yesterday the detail had yet to be worked out, adding he did not expect officers to be able to bar holidaymakers from leaving the country.

The Cabinet Office is to review all travel exemptions to permit them only for the ‘most important and exceptional reasons’.

People will only be allowed to travel for essential work that cannot be done from home or for education, a medical emergency or a bereavement.

Exemptions for hauliers vital to trade and for staff to maintain critical infrastructure, medical, military, diplomatic or scientific work are expected to continue but those for elite sports are being reconsidered.

Some 15,000 people a day are currently entering the UK with all being checked from this week by Border Force and airlines to ensure they have negative Covid tests within 72 hours of departure and locator forms for during quarantine.

Liability for outgoing checks to weed out non-essential travellers will rest with airlines who will face potential £2,000 fines if they fail to do so.

A National Police Chiefs’ Council spokesman said: ‘As they do in other areas, police officers will be visible at airports and ports… Anyone who does not have a valid reason to be away from home will be directed to return and may face a fine.’