An Afghan woman judge tried to fight off a Taliban assassin with her handbag but died after the killer shot her five times in the chest.

Supreme Court Judge Kadria Yasini, 53, drew her handbag to her chest to protect herself from the gunman’s attack in Kabul earlier this month.

Shots ripped through her black leather handbag, police say, leaving the 53-year-old dead at the scene, with at least five bullet holes in her chest.

Fellow judge and victim, Zakia Herawi, 47, was shot in the face, neck and chest, and died on the spot.

The two-man motorbike hit squad, who are still at large, fled the blood-soaked street in central Kabul shouting ‘Allahu Akbar’ as they peeled off. 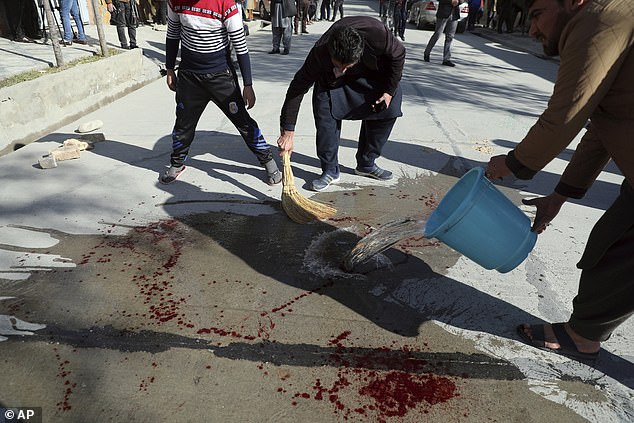 Gunmen shot dead the two unnamed judges, who worked for the Supreme Court, on January 17 in Kabul, where a new trend of targeted killings of high-profile figures has sown fear in the restive city 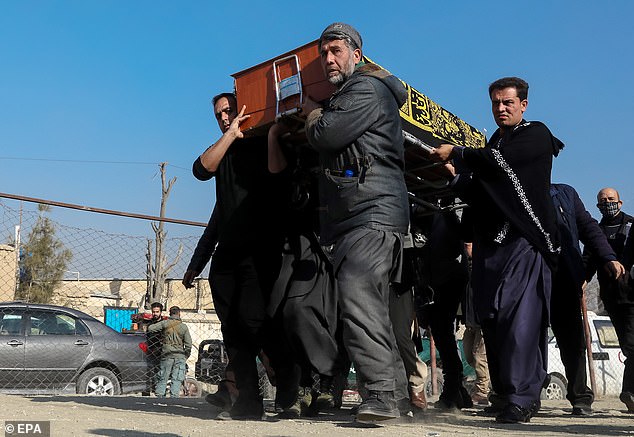 Violence has surged in Afghanistan in recent months despite ongoing peace talks between the Taliban and the government. Pictured: People carry the coffin of an Afghan women judge killed in Afghanistan earlier this month 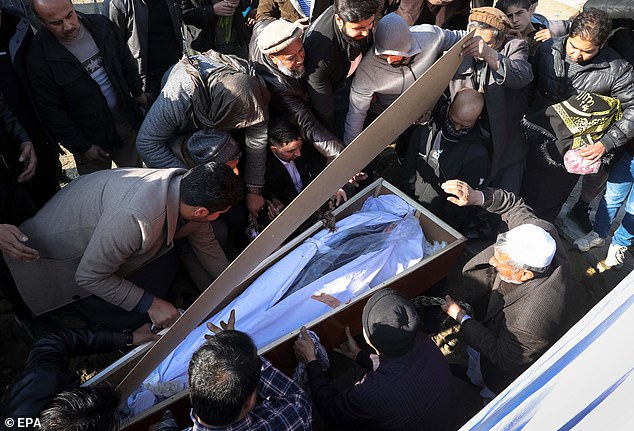 The shooting came just hours after a high-level meeting between the Taliban negotiation team and US special envoy for Afghanistan Zalmay Khalilzad, along with the head of US forces in Afghanistan, General Scott Miller, according to tweets by a Taliban spokesman. Pictured: Mourners gather at the funeral of one of the female judges killed by gunmen in Kabul on  January 17

While looking through his mother’s bullet-riddled bag, Yasini’s son Abdulwahab Yasini, 28, told the Times he thinks his mother was shot more than police estimates.

‘The police told us that Mum had been shot five times but maybe it was much more,’ said Abdulwahab Yasini, 20. ‘There are three spent bullets in the bag, and everything seems to have been shot through.’

A pair of tweezers were bent by the impact of the shells and the bag, a purse, notebook, water bottle and book on law written by the 53-year old were all pierced, the Times reports.

Abdulwahab then found a Mother’s Day letter he and his siblings had written to her, also lanced.

Yasini’s brother, Haji Mustafa Herawi, was one of the first at the bloody scene after hearing gun shots ring out through the window of his Kabul home.

He said their father was killed at the same spot 30 years ago during a rocket attack.

‘As a young man I ran into this street and collected my dead father’s brain from the tarmac,’ he told the Times. ‘Thirty years later I ran out and found my sister dead in the car in the same place. They had shot her in the face, head, chest, everywhere. And the wounds of the past came back again.’

The murders have caused outrage across Afghanistan and come just three months before the US and Britain withdraw the last of their fighting forces from the war-torn country.

Once content with attacking Afghan forces and law enforcement officers, the Taliban are increasingly targetting members of civil society, including MPs, journalists and prominent cultural figures, among others. 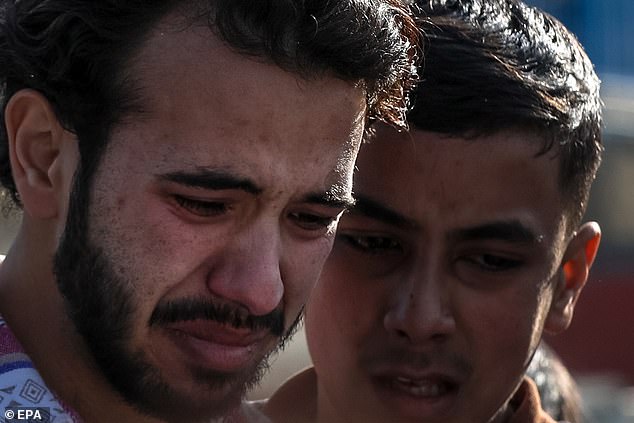 In recent months, several prominent Afghans – including politicians, journalists, activists, doctors and prosecutors – have been assassinated in often brazen daytime attacks in Kabul and other cities. Pictured: A relative of one of the slain judges cries at her funeral 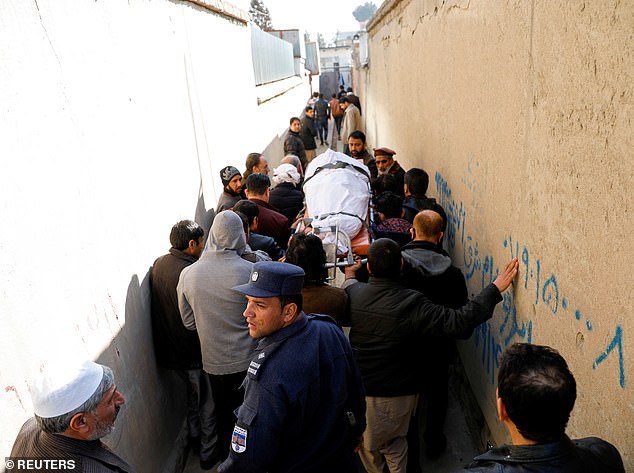 The targeted killings have surged despite the Taliban and Afghan government engaging in peace talks in the Qatari capital of Doha. Pictured: Relatives carry the body of one of the women killed in an ambush

On the same day the judges were killed, Taliban, Afghan and US negotiators sat down in Qatar. Among the insurgents’ demands was the release of 5,000 jailed fighters, which experts fear could see them return to their former strength.

As negotiations towards a permanent ceasefire drag on, Taliban footmen to kill with impunity.

Last year’s peace accord with the US government has restricted the insurgents in carrying out large-scale urban bombing campaigns, so they have switched methods.

Victims are now killed by trained motorbike assassins, or detonating magnetic mines under vehicles which engulf them in clouds of fire.

Afghan President Ashraf Ghani has accused the Taliban of launching an ‘illegitimate war and hostility’.

As the Taliban targets the liberal elite, droves of the country’s most-educated are leaving and applications for Afghan passports are at record levels, the Times reports.

‘People are leaving. Those that remain are becoming too afraid to speak out,’ said Shaharzad Akbar, chairwoman of Afghanistan’s Independent Human Rights Commission.

Akbar fears that public debate is being silenced among people who choose to stay. For many women, he adds, seeing the two judges killed after working so hard to rise in such a male-dominated judiciary, ‘raises the question in women’s minds here: “Is it worth it?”‘

On the day of the killings, Akbar called them a ‘systematic massacre’.

‘Afghanistan is losing one of its most important gains, its educated & professional cadre, in what seems to be a systematic massacre & the world seems to be just watching. This must stop,’ tweeted Akbar.

Killings in Kabul have risen sharply since November, with 91 civilians and 64 law enforcement officers slaughtered in just 102 days. Almost 350 people have been wounded.

Following the attacks, President Ashraf Ghani spoke to the families of Yasini and Herawi and called for the hanging of any Taliban prisoners found to be involved in the incident.

Social media users echoed Ghani’s calls for any accomplice’s to be executed.

Vice President Amrullah Saleh called the ‘ultra-sensitive and spectacular assassinations’, events that have shaken Afghani society, adding the Taliban was trying to ‘humiliate’ the government and target civil society.

Saleh said the reasons behind the attack is that the Taliban see media, and women, as blockades in the way of their Islamic state.

The extremists countered authorities’ comments with threats, which concerned UN, US and NATO diplomats as they fear rising public outrage could hinder already dragging peace talks.  ***

America’s 2,500 troops are to leave the conflict-ravaged country by 1 May and  Britain’s 1,000-strong battleforce will follow closely behind.

Western forces will leave whether a peace accord is finalised, or not, and many experts believe an agreement still won’t be reached in the timeframe. Many believe a collapse in talks will lead to civil war.

Two men held by Afghan intelligence have been interviewed and confessed to being behind the November killing of Yusuf Rasheed,  the CEO of the Free and Fair Election Forum of Afghanistan Yusuf Rasheed, and his driver.

The detainees, aged 19 and 20, are still awaiting trial after being arrested three weeks ago.

One admitted to watching Rasheed daily schedule and planning the attack, while the other confessed he had been in possession and transported one of the Berettas used.

Twenty-year-old Safi Ahmed told the Times that he’d been a member of the Taliban since he was 16 and that his superiors ordered Rasheed’s killing.

‘We were told by our commander that Yusuf Rasheed was a senior government official, backed by the infidels,’ Ahmed said.

‘We were instructed to travel to Kabul with just one mission, to kill him.’

It is firmly believed that the Taliban have been behind most of the killings, but some have been claimed by rival jihadist group, the Islamic State.

Some think that other criminal organisations, including the country’s mafia, could be involved and benefitting from efforts to cull the liberal elite.

Former news anchor Yama Siawash was killed in Kabul when a mine under his vehicle exploded on 7 November as he made his way to work at Aghanistan’s state-owned Central Bank.

Mr Siawash was collected 20 minutes after the vehicle left the bank’s secure car park, which suggests the mine was attached on bank premises.

His family believe the investigation was muddied in order to hide the mafia’s infiltration of the Afghan government.

‘My brother was killed because he worked for transparency in this society,’ said Abdul Baqi.

‘Yet now even the word ‘democracy’ is understood by our society as a target … all of these killings are undermining faith in what democracy actually means here or what place it has in our future.’