A New York City realtor has shocked social media users after he showcased a tiny apartment that costs $1,650 a month to rent.

Not only does the West Village studio have no stove or oven, a tiny fridge, and one small closet, but it doesn’t even have its own bathroom.

Instead, for $1,650 a month, residents have to share a toilet and a shower – which are also in separate rooms – with the whole complex.

And renters would need to be sure not to lose their keys, as they’re needed to get into both the bathroom and the shower.

The astronomical price for the Manhattan apartment – which is located on 5th Ave and 11th St close to New York University – is not even as high as it may potentially have been pre-pandemic, with prices continuing to drop as wealthy New Yorkers remain in exodus. 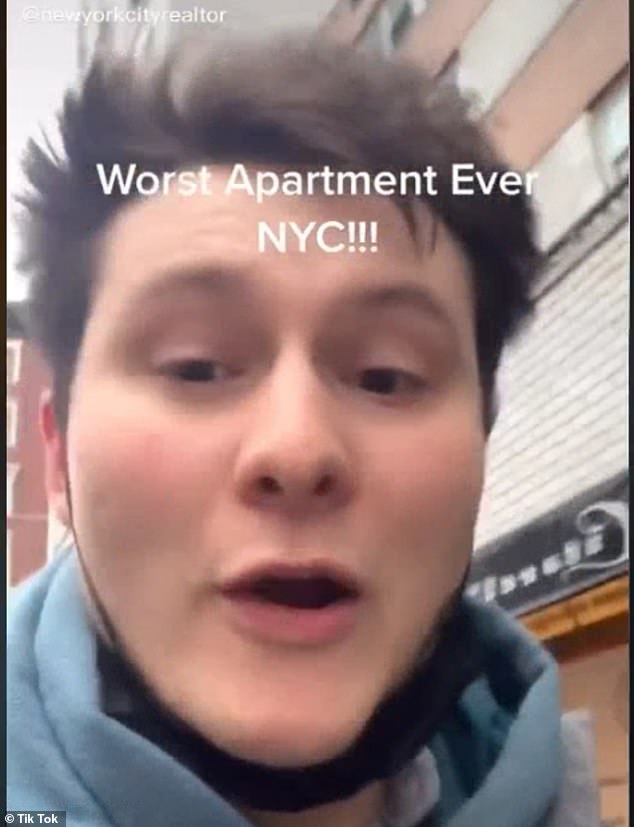 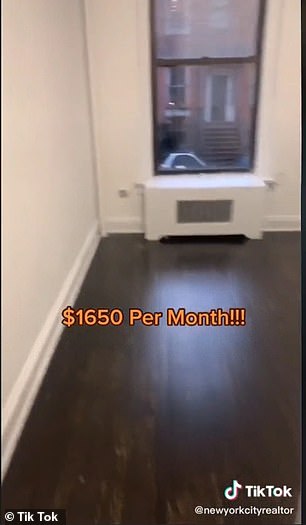 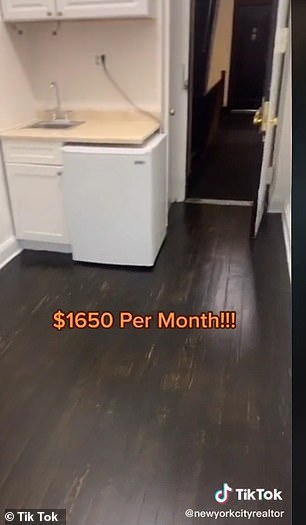 For $1,650 a month, the renter lives in a room with no proper kitchen or bathroom

‘How is this legal?’ another asked below the TikTok video

The video was shared by new TikTok account New York City Realtor (@newyorkcityrealtor) – run by Cameron Knowlton and Tatum Kelly – who have already racked up 2.4million likes on six videos in less than a week.

After the first videos showed off larger residences going for upward of $10,000 a month, Knowlton then showed off the worst place he’s ever come across, pointing out that as realtor, he doesn’t set the rent.

‘I posted the worst apartment ever in a Facebook group a couple years ago,’ he explained to DailyMail.com.

‘I was just starting out in real estate and struggling to get by. It was my first post as a realtor (big part of our job) and the internet ripped me apart. I got death threats.

‘People would call me all day to insult me and what not. They said I was the worst broker ever,’ Knowlton added.

He decided to try again this year with his new TikTok account, eagar to show what the pits of NYC real estate can truely mean, and do it on his own terms.

Knowlton says that he is not affialated with the building but that he had come across it as an open listing, which anyone with a real estate licence can show to potential renters if they wished.

‘People ask me, what’s the worst apartment you’ve ever seen, I’m going to show you,’ Knowlton says in the TikTok footage before cutting to the single-room home.

‘And before you ask, yes, this is a real apartment. This is what $1650 gets you in the most desirable neighborhood in New York City.

‘Zero oven, one mini fridge, no stove and only one singular closet.’

In total, he manages to show off the whole apartment in a few seconds.

In a second video, he reveals the bathroom situation which he claims is ‘just as bad as you could possible imagine’.

‘Picture this is you in your dining room area and you gotta go, follow me,’ he says, while still standing in the apartment.

He adds in the caption that as well as your dining room, it’s the ‘living room, kitchen, bedroom and closet’. 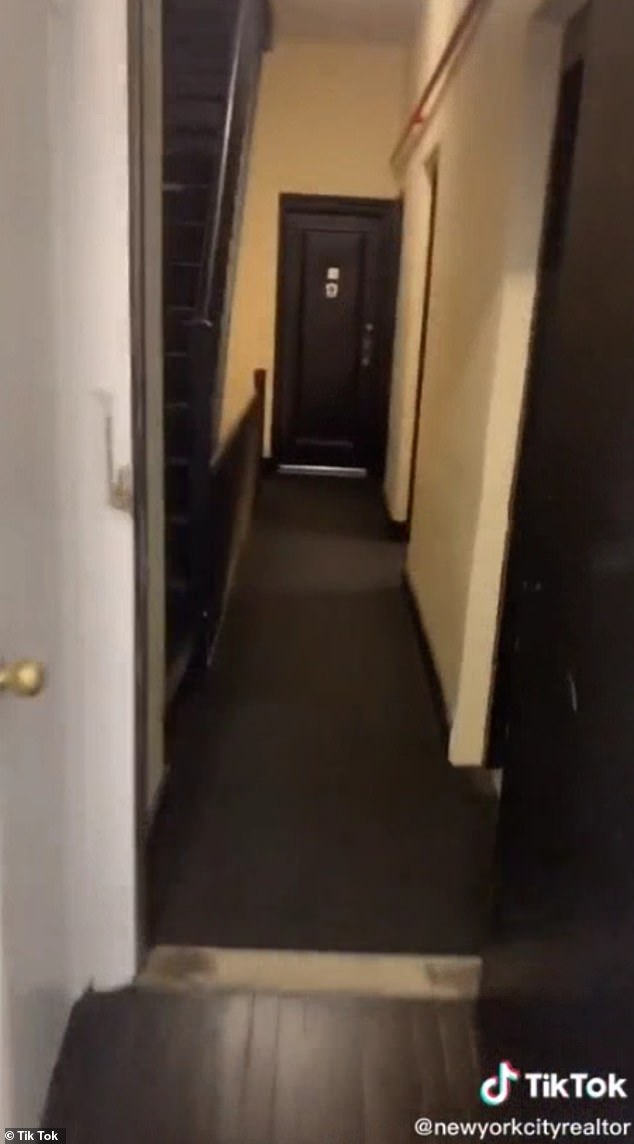 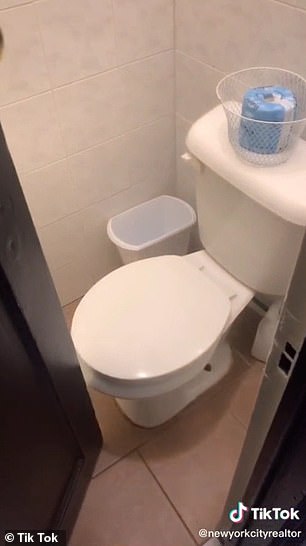 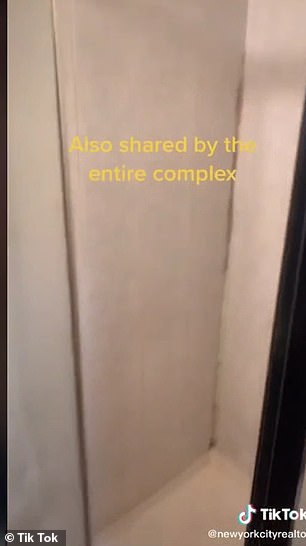 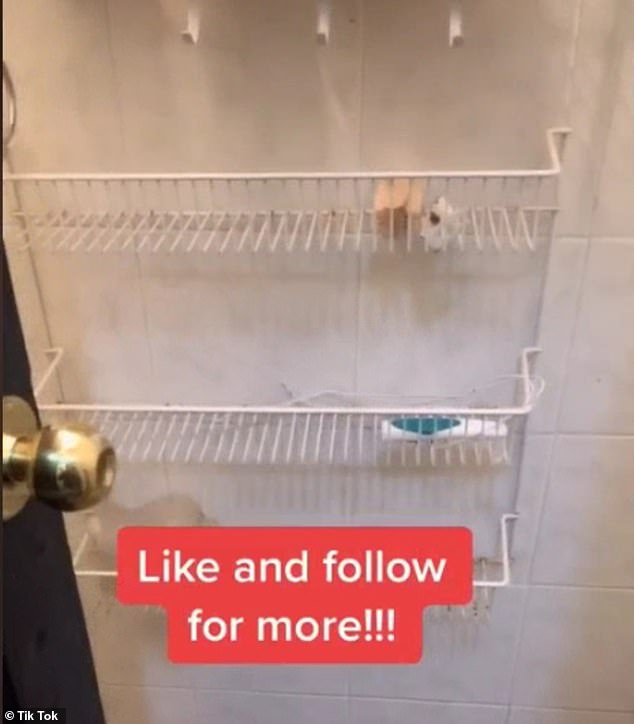 ‘Here is the first part of the bathroom and you’re going to need your key because this is for security purposes,’ the realtor claims while standing out in the hall.

‘Now, here is the toilet, shared by the entire complex. You can see it’s actually pretty clean, and there’s no sink by the way.

‘And if you want to take a shower you’re going to have to come across to the other part of the hallway,’ he adds.

‘Now remember your key and here is the shower. Not too bad, not too shabby, and here’s some shared soaps if you would like some.’

Knowlton adds that this shower is ‘also shared by the whole complex’ in the captions.

Others watching on TikTok were appalled by how little a renter was getting, claiming in the comments below ‘this has got to be a joke’.

TikTok users were horrified by how small the apartment was

‘That’s double my house payment on a 1900 square foot home in Texas,’ one user said.

‘HOW IS THIS LEGAL,’ asked Jilly ,while Blyssed said ‘college dorms are better than this’.

‘That’s not an apartment. It’s a compartment,’ commented a user named Reanie.

‘And people thought we were joking when we said New York City apartments were like closet,’ claimed another named Kels.

Many joked about the bathroom and spread of coronavirus

Most of the comments were about the bathroom situation with viewers joking that ‘Starbucks is 3 blocks away’.

Many users also joked about the pandemic with Signemanderson commenting, ‘I just know the COVID is 30, flirty ad thriving in that building’.

‘Entire Complex?! No SINK!!! THE GERMS ON THE HANDLES OMGGGG,’ said user Sumaya.

‘And now we know exactly why the ‘rona spread so badly in NYC last spring,’ added Emily Miller Jocham.

Despite the criticism, some have rented the apartment, although not for long.

It was last listed for rent in October 2019, meaning that its last occupant potentially stayed for just over a year.

Knowlton also said the reaction has been ‘100 percent’ more positive than the last time he highlighted the ‘worst apartment in NYC’, and he is now using his viral fame to raise money for homeless in his lastest TikTok video.