A serial burglar who taunted police with abusive Facebook posts while he was on the run has been jailed for 11 years.

Levi Hilden, 36, posted a string of messages and pictures on Facebook boasting of his life on the run after Suffolk police announced they were hunting him.

He repeatedly referred to one officer as Sgt P***k and even posed half naked outside a police station showing off a tattoo of his name on his back.

Hilden also posted videos and pictures of himself with drugs and tucking into restaurant meals and takeaways while bragging that police could not catch him. 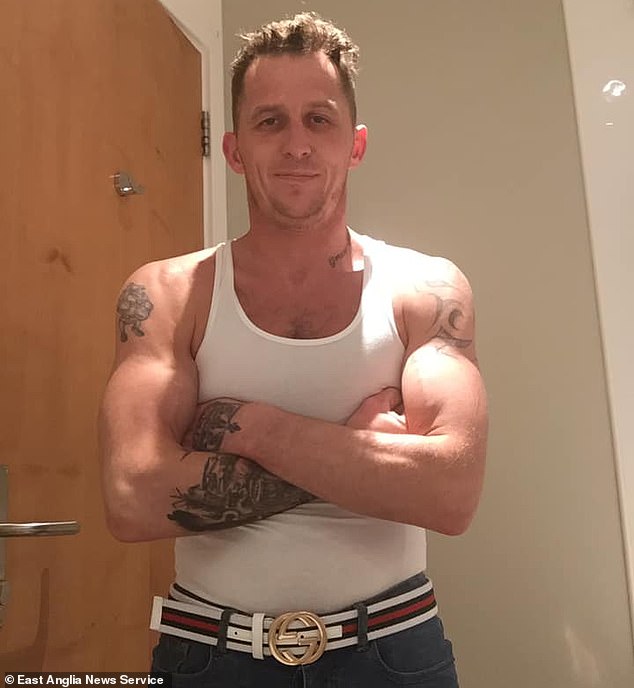 Levi Hilden, 36, of Ipswich, Suffolk, who taunted police with abusive Facebook posts while he was on the run has been jailed for 11 years

But he had his smile wiped off his face when he was arrested in King’s Lynn, Norfolk, a week after police revealed he was wanted.

Hilden of Ipswich, Suffolk, has now been jailed for offences including the burglary of his aunt’s home while was at her son’s funeral.

Ipswich Crown Court heard how he had stolen goods and possessions worth around £50,000 in a year long spree of burglaries and the robbery of a jeweller.

Another showed him bare-chested, saying: ‘Do you think my pecs look good* that’s a life of running. 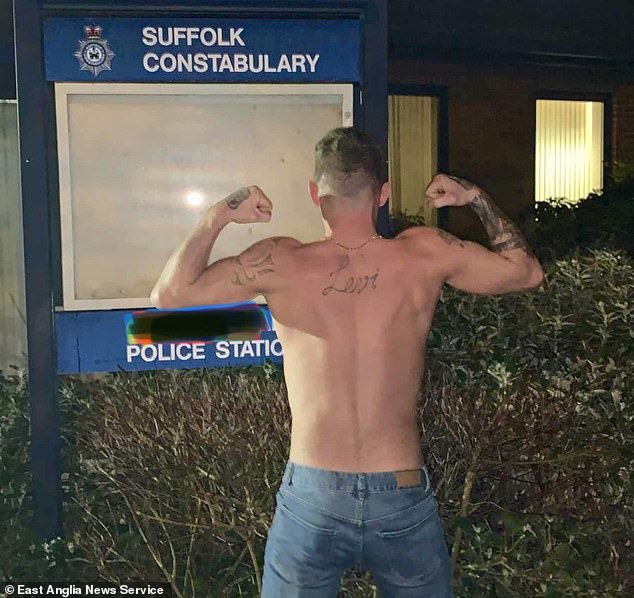 The video then zoomed in on a pan of grilled bacon as Hilden said: ‘This f***king close. It’s as close as I want to be to a bit of bacon. Anyway P***k, see you later.’

A third video had him in a Chinese restaurant, saying: ‘This is for Mr P***k. You know who you are. Well anyway, I’m in China now. You can tell by the décor.’

An accompanying picture of his Chinese food, was captioned: ‘For Sgt P***k. Just a start wt u having apart from stress’ followed by emojis of a laughing face and a police officer.

In another video he went on: ‘How are we Sgt P***k? I thought I would let you know that I am living the dream. Another day, another dollar. See you later, you p***k.’

Hilden’s Facebook page also showed his face superimposed on a picture of a police officer in a toy police car and with his face over film character Forrest Gump running with the caption: ‘Sgt P***k is after my Jenny.’

A selfie of Hilden was captioned ‘Sgt P***k give it arrest’ with more laughing emojis while a picture of his steak and chips meal, had the message: ‘Wonder how many more meals like this I’ll have?’.

Hilden posted his bragging messages while he was on the run for a week in January last year after Suffolk Police revealed he was wanted for a string of crimes.

The court heard how Hilden smashed down the back door of his aunt’s house because he knew it would be empty when she was at her son’s at his funeral on New Year’s Eve, 2018.

He caused ‘a considerable amount of damage’ before stealing ornaments, watches and jewellery worth £8,600 from the property in Kirton near Felixstowe, Suffolk.

Villagers told police that they had seen a silver Volkswagen Beetle leaving the scene and officers later pursued the car. 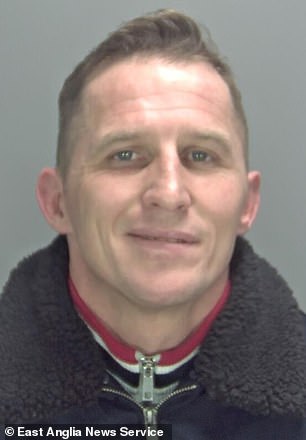 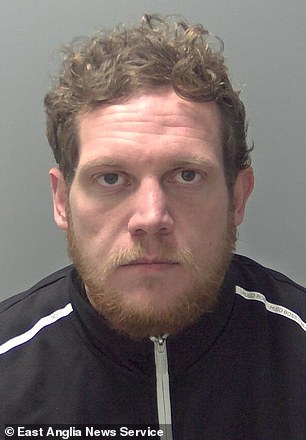 But at one stage the police car was reversed into by the VW and officers eventually lost sight of the vehicle, said prosecutor David Wilson.

Hilden’s aunt said in a victim impact statement that the impact of the burglary had been ‘devastating’.

Judge Emma Peters described the burglary of his aunt’s home as ‘cruel, nasty and wicked’ before jailing him for a total of 11 years.

She told him: ‘Mr Hilden, this is a year-long spate of significant criminality, not just dishonesty, but dishonesty that has had a horrible effect on a number of people. 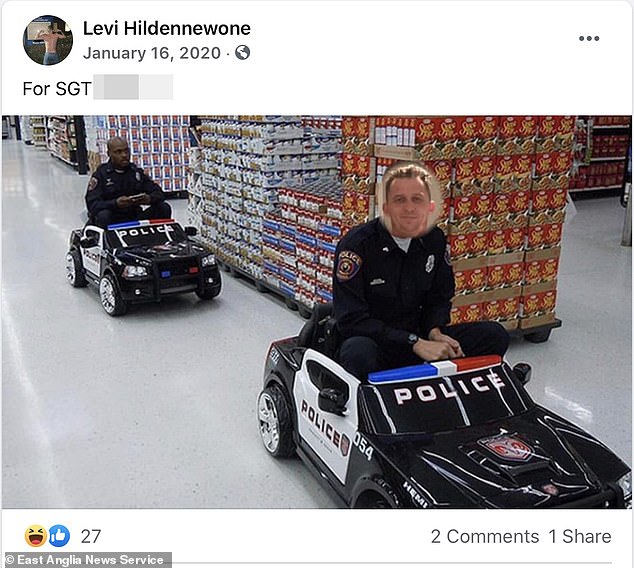 ‘People who have had their lives changed for some time by your inability to stay on the right side of the law.’

Hilden who has 28 previous convictions for 83 offences since 2002, also snatched bracelets and gold chains from Boreham Christopher jewellers in Ipswich on July 15, 2019.

CCTV pictures showed him taking the items worth £5,326 when the jeweller who knew him was at the back of the shop.

The pair who were wearing ski masks used a sledgehammer to smash glass in the main door before stealing goods including perfume and aftershave, worth £11,500.

Hilden threatened a member of the public with a metal pipe when he was asked what they were doing as they fled with their haul. 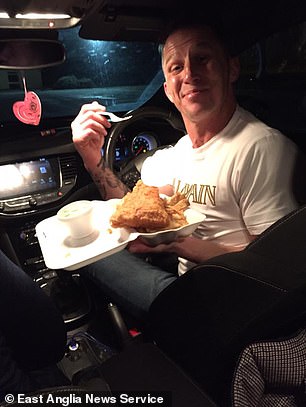 Five days later a jeweller in Sudbury was loading stock into the boot of his car when Bocock threatened him with an axe and ordered him to hand over jewellery.

Hilden put his hands around the neck of the owner’s wife before he and Bocock escaped with stock worth £25,000 as well as mobile phones and a handbag.

The two men also stole £3,000 including charity crash from a safe in a burglary at the Nethergate Brewery in Long Melford, Suffolk, on January 8 last year.

On the same night, they smashed their way into a café and stole several hundred pounds in cash.

Bocock of Doncaster, South Yorkshire, was jailed for eight years at Ipswich Crown Court last November after he admitted robbery and burglary.

A Suffolk Constabulary spokesman said: ‘Levi Hilden may have been on the run, but he could never evade justice forever.

‘Through persistence and determination the law finally caught up with him and it is gratifying to see justice take its course and we hope this conviction is also of some comfort to the victims he caused so much distress and upset to.’

Det Sgt Paul Cappleman from Bury St Edmunds CID added: ‘Hilden was an individual who caused a great deal of distress and upset and he showed little concern for the impact his actions had on the victims.

‘Such acts of robbery and burglary are extremely intrusive crimes and would have been extremely frightening to have experienced. A sentence like this acts as a deterrent to other would be burglars that the courts take this type of offending very seriously.’