Boris Johnson and Rishi Sunak are to head up a new taskforce to rebuild the battered economy in the wake of the pandemic, The Mail on Sunday can reveal.

The Chancellor has watched with growing alarm as the cost to the public finances has exceeded £340 billion – and with normal economic life not expected to return until summer at the earliest, the bill will keep on rising.

Now a new Cabinet sub-committee, the National Economy Recovery Taskforce, has been set up with the pair as joint chairmen – an attempt to signal that No 10 and the Treasury are in lockstep on policy. 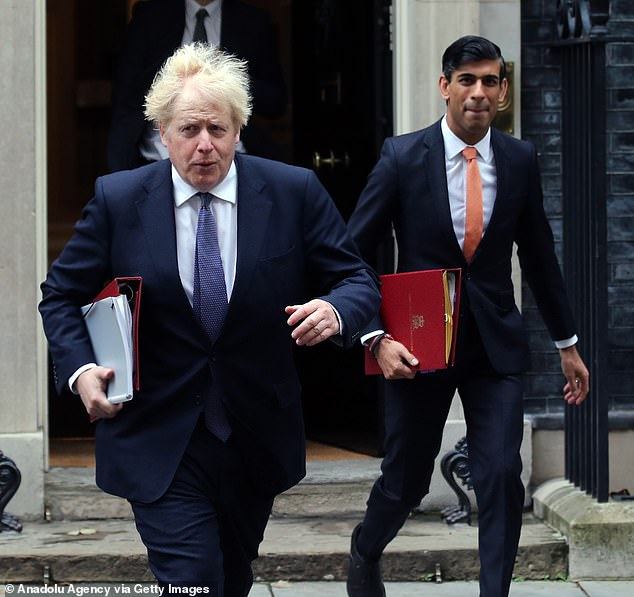 Boris Johnson and Rishi Sunak are to head up a new taskforce to rebuild the battered economy in the wake of the pandemic, The Mail on Sunday can reveal

The group, which will also include Cabinet Office Minister Michael Gove, Business Secretary Kwasi Kwarteng, Transport Secretary Grant Shapps and Education Secretary Gavin Williamson, will try to fill the hole in public finances by devising a ‘plan for growth’ which will advance the Prime Minister’s aim to ‘level up’ regional income disparities.

As part of the plan, Downing Street has approached many of the ‘Red Wall’ MPs – who propelled Mr Johnson to victory at the 2019 Election by winning seats from Labour – to ask them to list the investment priorities in their constituencies.

However, No 10 and No 11 disagree on the role of public spending plans in the recovery.

While Mr Johnson wants to pursue his beloved infrastructure plans, such as high speed rail projects in the North of England, Mr Sunak does not think the country can afford them while also ploughing billions into propping up stricken businesses.

Mr Sunak is more concerned about restoring the Tory Party’s reputation for prudent management of the public finances by cutting spending.

Although March’s Budget is unlikely to include aggressive tax-raising measures, given that the country is still likely to be in lockdown, the Chancellor has warned backbenchers that he will have to start tackling the Government’s soaring deficit of £400 billion before the end of the year.

Public debt now stands at more than 100 per cent of GDP for the first time since the 1960s.

Mr Kwarteng echoed Mr Sunak’s private views in public yesterday, when he warned that Britain could not spend its way out of the crisis.

The Business Secretary said: ‘Without a thriving private sector we will not be able to afford good public services.

‘The Chancellor is of the same opinion. We… are not going to be able to spend our way to prosperity.’

Transport Minister Andrew Stephenson told the Northern Powerhouse group of Tory MPs that the Treasury was ‘uncomfortable about making long-term spending commitments, because of all the uncertainty around the public finances’.

‘At the same time, the Prime Minister still holds to his firm view, that he expressed in February last year, that we need to have a plan that sets out where we are going for the next few decades, so businesses can invest, so people can be skilled up, so they can deliver those infrastructure projects.

‘We need to give industry and the country that confidence.’

A source close to Mr Sunak said: ‘Last year’s spending review delivered the highest level of investment in infrastructure and public services for a decade.’