A Georgia chief of police has resigned and an officer has reportedly been fired after bodycam footage that surfaced last week showed the moment they used racial slurs during a a 2020 Black Lives Matter protest.

Hamilton Police Chief Gene Allmond and Officer John Brooks were both caught on video, obtained by WTVM, using the N-word and discussing slavery as the mere ‘mistreatment’ of African Americans.

In the footage the men discuss slavery and at one point it appears that they talk about the killing of Rayshard Brooks, who was shot dead by officers outside a Wendy’s in Atlanta in June 2020, just weeks after George Floyd died under the knee of a white police officer in Minneapolis.

Officer Brooks is heard referring to a man who used to be Secret Service saying “‘you didn’t have to shoot ’em, it’s just a taser,” then how come when you tase a f**king n***er it’s like you done killed him 27 times?’. 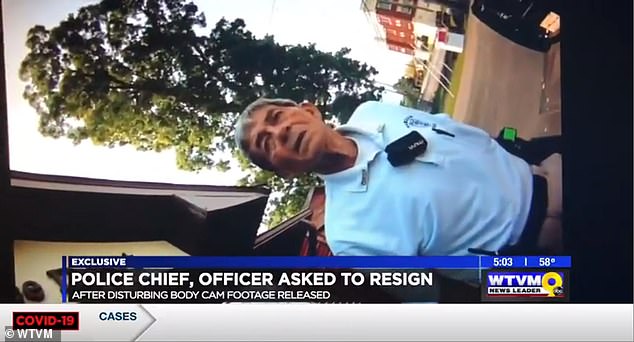 Allmond then chimed in: ‘But what would you have done if it had hit the officer? Go over there and get his gun and kill him?’

Brooks continued his rant and defense of the officers shooting Rayshard Brooks: ‘What if one of them projectiles woulda struck him [police officer] in the eye? The act of him firing that taser at an officer is an aggravated assault because he has not been trained in the proper use…An officer…if I go to tase somebody, I know to shoot low, I know what to do. He doesn’t know.’

‘And that Mayor up there? Uh…she’s already fired the officer. And um without a hearing, and she’s pushing real hard. They say she’s now the front runner to be Joe Biden’s vice presidential candidate,’ Brooks added.

Allmond responded, ‘You’re kiddin’!’ before Brooks said: ‘Because…if I had to f**k a n***er, I’d rather f**k the Mayor than Stacey Abrams.’ Officer Brooks was referring to Mayor Keisha Lance Bottoms, the black mayor of Atlanta.

They then start a discussion around the Black Lives Matter protest that they were patrolling. 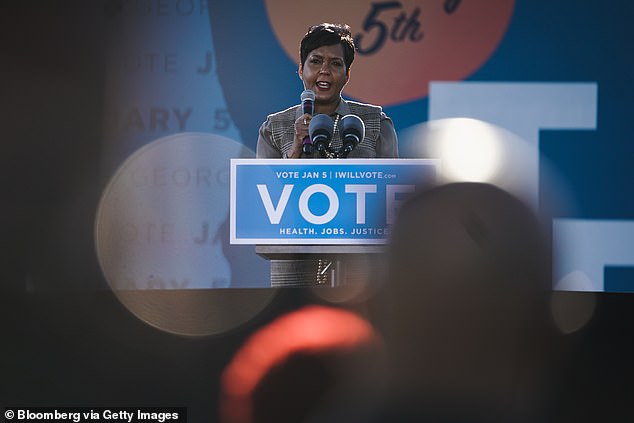 At one point, Brooks said: ‘Because…if I had to f**k a n***er, I’d rather f**k the Mayor than Stacey Abrams.’ Officer Brooks was referring to Mayor Keisha Lance Bottoms (pictured on January 3), the black mayor of Atlanta

‘F**k…Protests, son of a b**ch what is the matter with these f**king people? I don’t own no slaves. My folks didn’t own no slaves…,’ Allmond is heard telling Brooks. ‘You know what are we talking about…? 200 fucking years ago?’

Brooks added: ‘Hey, I’ve been doing uh…I do a lot of stuff on my family history on My Ancestry…and you know we’re all from up north, but there was a small branch of the family that lived in Virginia, which before the Civil War, what is West Virginia, was Virginia. And I did find evidence of some slave ownin’ part of my family. Even though we’re from Ohio and didn’t–nobody up there. But I’ll tell ya, looking at Chris’s family? Holy shit! Man let me tell you what…

‘She had a, one relative I can’t remember his name, he was, fought in the Civil War, after the Civil War was over with, he became an overseer at a plantation, he was in charge of all the slaves, and there was some article or something about something he did and the paper and the newspaper said that whatever his name was he was known to be the meanest man alive,’ Brooks said.

Brooks responded: ‘And now, we give them all those things and they don’t have to work.’

The pair carried on conversations with protesters and relatives on their personal phones.

At one point Brooks can be heard saying he’d let a group of ‘rednecks’ take care of the situation if the protest got out of hand.

The disgusting footage resurfaced after a part time city employee was checking if the body camera was functional on January 25, according to WRBL.

He then found the footage and alerted the mayor’s assistant, Buddy Walker, who then called in Mayor Julie Brown, the City Council, and City Attorney Ron Iddins.

The Hamilton City Council asked for Allmond and Brooks to resign or face termination.

Officials immediately removed the two men from their positions with the Hamilton Police Department.

According to WTVM, Chief Allmond resigned, while Brooks was terminated.

The station reported that both men believed that their body cameras weren’t working while they patrolled the Black Lives Matter protest in Hamilton.