British tourists are among 96 foreigners to have been put into mandatory quarantine by Austrian police after they were caught breaching Covid-19 restrictions by going on a skiing holiday.

Each person could face a fine of up to €2,180 (£1,921) if they are found to have used loopholes to stay at the St Anton am Arlberg resort, in Austria’s Tyrol region.

Some of the group registered local addresses, or said they were there for work reasons, the BBC reported on Monday.

Ski slopes in Austria are currently open to locals, but closed to foreigners. 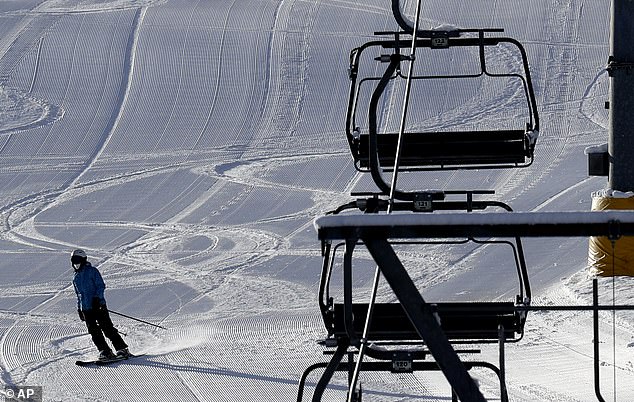 A group of 96 foreigners, including Britons, have been put into mandatory quarantine by Austrian police after they were caught breaching Covid-19 restrictions by going on a skiing holiday. Ski slopes in Austria are currently open to locals, but closed to foreigners. Pictured: A skier goes down a slope beside an empty chair lift in Tyrol, Austria on January 30

It is currently unclear how many British people have been quarantined.

Everyone in the group must now show coronavirus PCR tests after the police checked 44 hotels and chalets in the central Austrian resort.

After the police operation, Interior Minister Karl Nehammer said ‘whoever fails to obey the Covid-19 rules and stays in our country without justification must be fined.’

In addition, regional governor Günther Platte said there would be ‘zero tolerance’ for rule violations.

Austria is currently under a third national lockdown with only essential shops open, with people required to stay at home and only leave the house for essential reasons.

Under the measures that are in effect until at least February 7, hotels and restaurants are closed, as are a number of other leisure facilities.

The country has also implemented a ban on flights from from the UK, South Africa, and Brazil – countries where new coronavirus variants have been found. This was extended on January 23 to run through until at least February 7 as well. 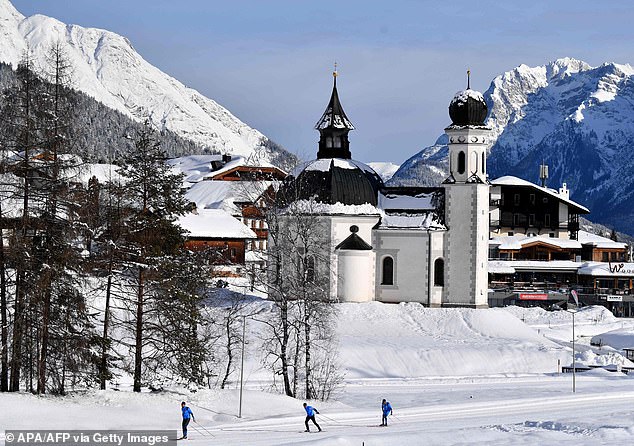 Pictured: Skiers pass by the church in Seefeld on January 30, 2021. – Austria’s ski lifts reopened around Christmas for domestic visitors amid the Covid-19 pandemic

Leisure and culture facilities, including gyms, pools and amusement parks are currently close, however cable cars and ski areas have been allowed to reopen.

The lockdown has been in effect since December 26, while stricter rules around entering the country were introduced on January 10 – largely to discourage skiers arriving from abroad.

The measures force entrants from other countries – including almost every other country in Europe – to go into quarantine upon their arrival.

In recent weeks, however, the public have been shocked to learn of loopholes involving work or training, that tourists have taken advantage of.

While regular skiers are not allowed to stay overnight at a resort, coronavirus clusters have been detected at skit teacher training courses, which were allowed to be held for visitors from other European countries. 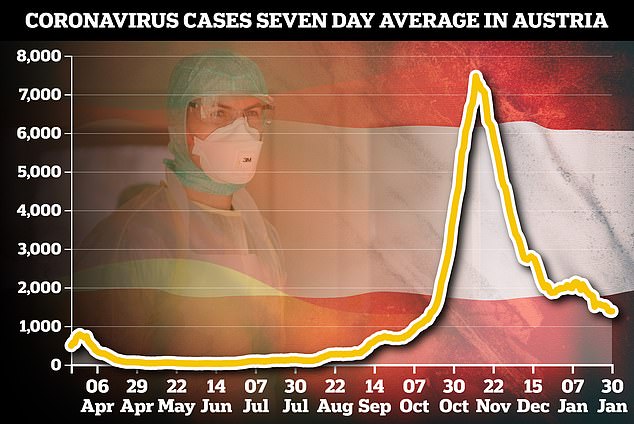 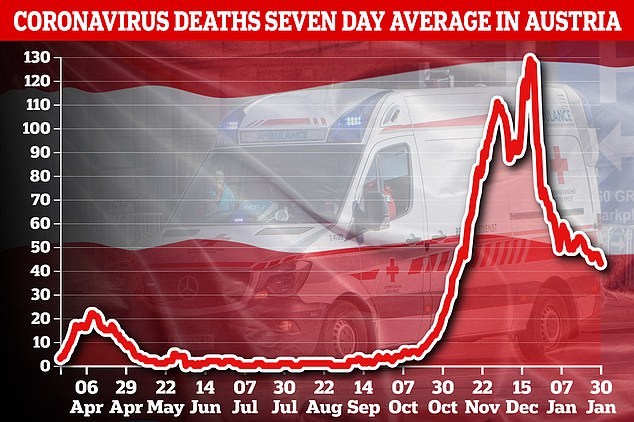 As of January 31, Austria has recorded 414,398 cases on the coronavirus and 7,721 Covid-19 related deaths. The last seven days saw Austria record an average of 1,383 cases and 43 deaths per day, with case numbers steadily falling since November (pictured top) and daily deaths calling since the end of December (pictured bottom)

After the number of daily new cases peaked in mid-November, and deaths peaked in the following weeks, Austria has been able to bring the numbers down.

The last seven days saw Austria record an average of 1,383 cases and 43 deaths per day, with case numbers steadily falling since November.

Like other countries on the continent, Austria has seen a slow start to its vaccination programme, with just 2.23 people per 100 being given a dose of the vaccine so far.

On Sunday, thousands of people, including some neo-nazis, defied a ban to march in Vienna in protest against the curfew and lockdown.

Police had on Saturday announced a ban on the march after around 10,000 turned up for a similar such protest earlier in the month, many of them ignoring the safety restrictions designed to slow the spread of the virus. 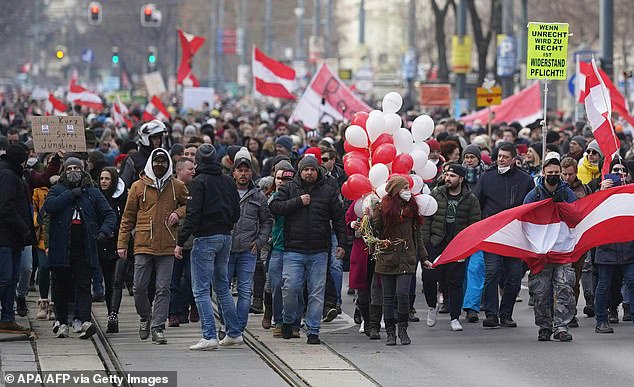 Protesters – including conspiracy theorists and neo-nazis – took part in demonstrations against the ongoing restrictions related to the coronavirus pandemic in Vienna, Austria on January 31

Many of those who took part in Sunday’s march, which was organised by the far-right FPOe party, followed suit, ignoring government regulations on mask wearing and social distancing measures.

Neo-nazi activists were among the crowd, which refused to disband and blocked traffic as it began to march towards the national parliament.

Police arrested around 10 protesters and four officers were injured during scuffles.

It was the first time that the FPOe, and member Herbert Kickl who is a former interior minister, officially called for a protest against the third Austrian lockdown.

‘We are seeing unprecedented censure,’ Kickl told media Saturday, before the party put in a second request for a rally permit which was also refused.

The reason for the refusal was given as a risk of increased transmission rates of new variants, and a ‘lack of contact traceability’ among those who were to take part. 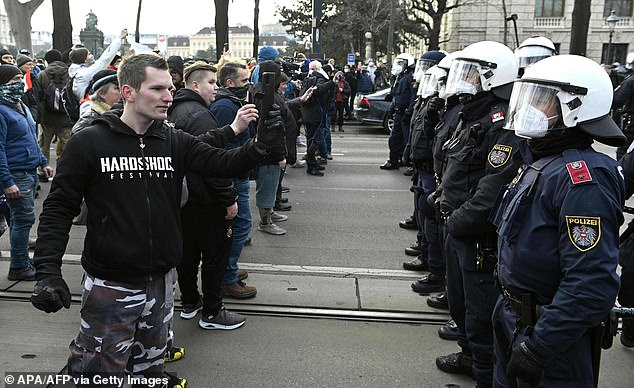 Elsewhere in the region, four people were killed in an avalanche over the weekend, police said on Monday.

Authorities in the Tyrol region had warned on Thursday of an increased risk of avalanches due to rain and snowfall combined with strong winds and changes in temperature.

A 37-year-old man and a 38-year-old woman, both from the region, ‘set off an avalanche at an altitude of 2,100 metres (6,890 feet)’ in the Sellrain district on Saturday, the Tyrol police department said in a statement.

‘They were both totally buried by the avalanche and their bodies could only be recovered on the evening of January 31,’ the statement said.

On Saturday the police had announced the death of a 16-year-old German boy in the Kuehtai area.

He did not have any detection equipment and was skiing off piste with two friends at an altitude of more than 2,600 metres when he was struck by loose snow.

A 48-year-old Austrian was also killed by an avalanche on Saturday while cross-country skiing in the resort of Axamer Lizum.

Four further avalanches were also reported in Tyrol on Saturday but did not cause any deaths.

In recent years an average of around 20 people have been killed annually by avalanches in Austria.

For the winter of 2019/20 the number was lower, at 13, in part due to the season being cut short by the first coronavirus lockdown.