Collingwood Magpies president Eddie McGuire has admitted he ‘got it wrong’ in his response to a bombshell report into systemic racism at the AFL club.

McGuire was forced to respond to scathing criticisms of how he referred to the report’s findings as a ‘proud day’ at the club’s annual general meeting Tuesday night.

An apologetic McGuire said he had used the term ‘under the pressure of the day’ – but he was wrong to do so.

‘Over the course of an hour, we answered every question but in my opening I got it wrong. I said it was a proud day for Collingwood and I shouldn’t have,’ he said.

‘I did not mean we were proud of past incidents of racism and the hurt it caused. 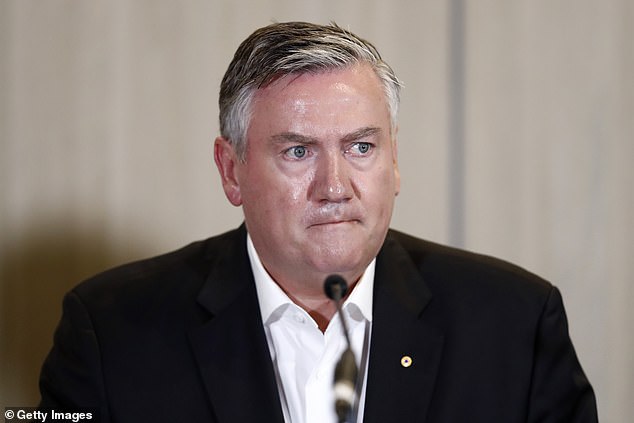 ‘It’s been interpreted widely that way and I regret that deeply.’

McGuire, who is in his final year as president after 23 years in the top role, said the club was determined to ‘make the future balanced and inclusive for all people’.

He said the club would seek to acknowledge its failings and to learn from them.

‘I’m sorry that my error has acted as a distraction from the importance of the finding of racism and the work that lies ahead,’ he said.

‘(We are) apologetic, we are humbled, and we are also galvanised to dismantle any structures of systematic racism.’

The report found the club’s attempts to deal with allegations of racism were either ‘ineffective’ or ‘exacerbated’ the situation.

Delivered to club executives on December 17 but kept secret until Monday, the report’s authors said Collingwood was now perceived by some as ‘synonymous with off-field and on-field racism in Australian sport’.

Former Collingwood player Chris Egan, who was one of 30 people interviewed for the report, took to social media to slam the club’s response as a ‘f***ing trainwreck’. 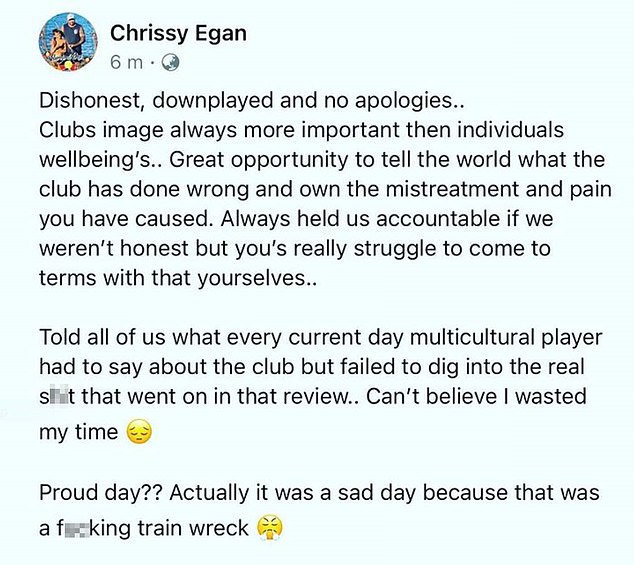 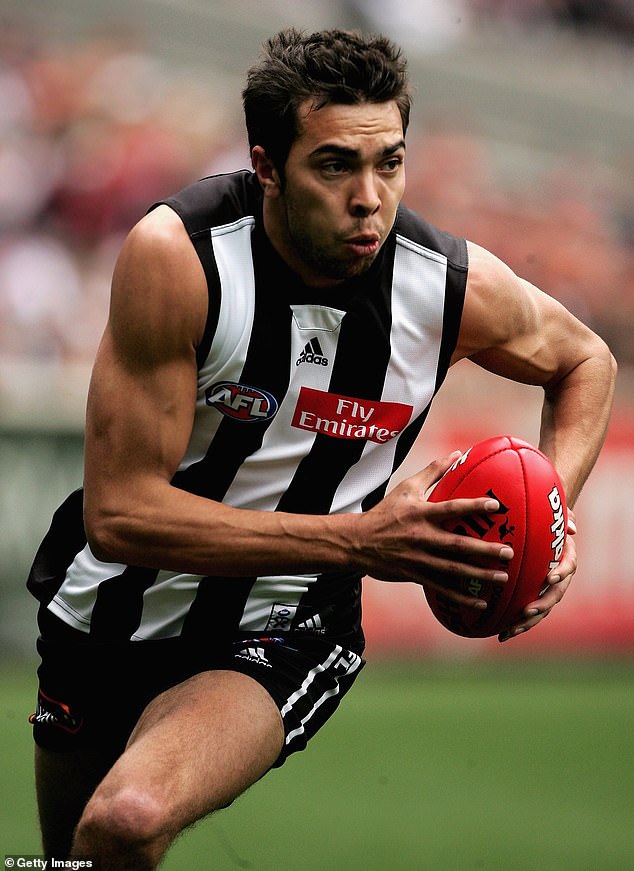 Egan (pictured), who was one of the people interviewed for the report, said: ‘Can’t believe I wasted my time’

‘Proud day?? Actually it was a sad day because that was a f***ing trainwreck.’

Egan said he felt he had wasted his time with his involvement in the report.

During a press conference on Monday, McGuire, 56, denied there was any ‘systemic racism’ at Collingwood, and said that on his watch they ‘built a fantastic club’.

‘It was not systemic racism, as such, we just didn’t have the processes to deal with it that we do now. I don’t think there’s any shame or disappointment here… this is a day of pride,’ he said.

Heritier Lumumba, who is suing the Magpies over claims he was subjected to racial abuse while playing with the team, slammed the club’s response as ‘bizarre’ and ‘cowardly’ – and called for the AFL owners to step down.

Lumumba hit back at the laid-back response delivered by McGuire on Monday following the report’s findings. 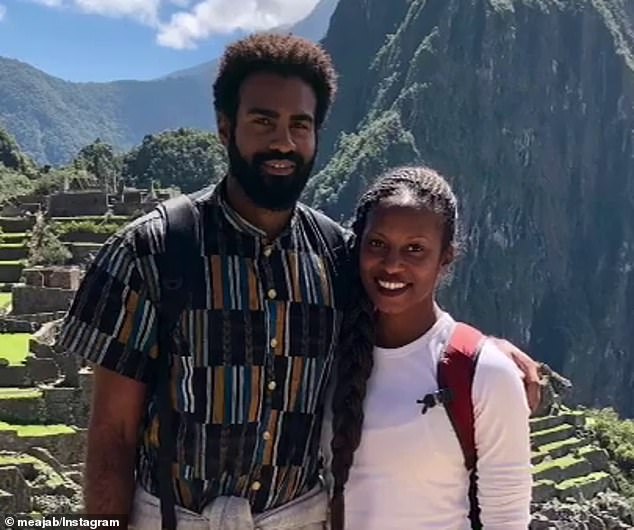 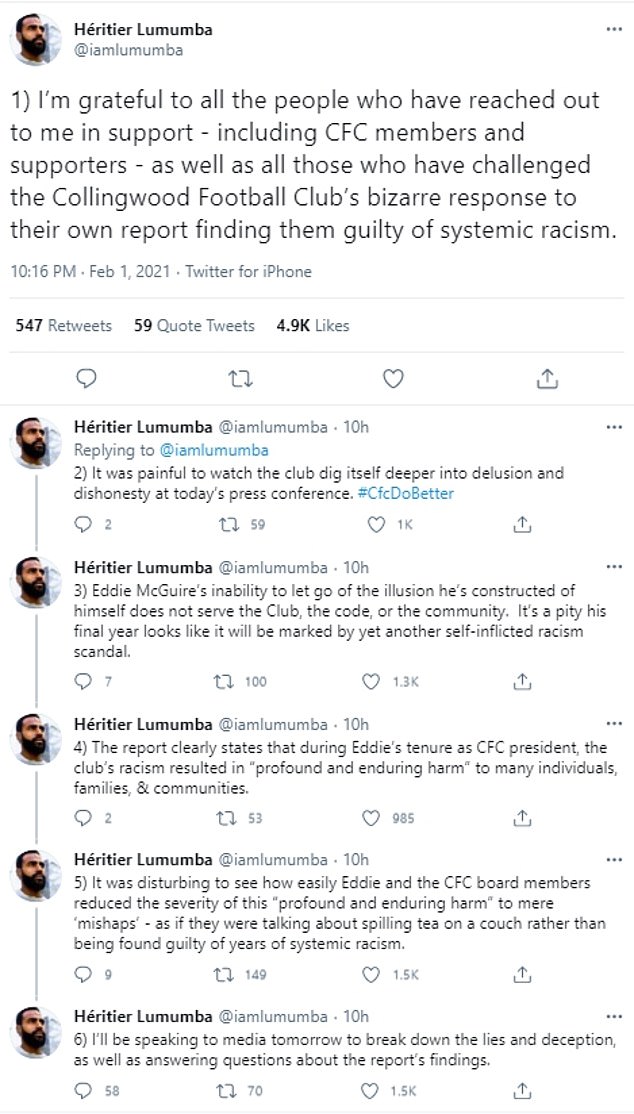 ‘It was painful to watch the club dig itself deeper into delusion and dishonesty at today’s press conference,’ Lumumba tweeted on Monday night.

‘Eddie McGuire’s inability to let go of the illusion he’s constructed of himself does not serve the club, the code, or the community. It’s a pity his final year looks like it will be marked by yet another self-inflicted racism scandal.

‘The report clearly states that during Eddie’s tenure as CFC president, the club’s racism resulted in ”profound and enduring harm” to many individuals, families, and communities.

‘It was disturbing to see how easily Eddie and the CFC board members reduced the severity of this ”profound and enduring harm” to mere ”mishaps” – as if they were talking about spilling tea on a couch rather than being found guilty of years of systemic racism.’

Lumumba also thanked Collingwood Football Club members and supporters who reached out to him. 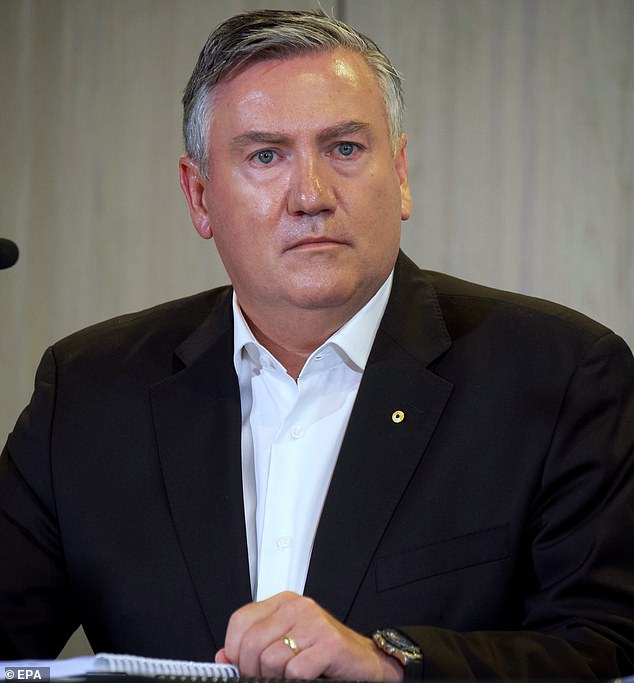 McGuire (pictured), who has been Collingwood president for 23 years, said: ‘I said it was a proud day for Collingwood and I shouldn’t have’

On Tuesday morning, Lumumba continued his attack on McGuire’s response on ABC’s RN, calling it ‘cowardice’.

‘The report states that when the Collingwood Football Club is confronted with the truth or the facts that pertain to racism and systemic racism, it doubles down, it denies, it doesn’t accept responsibility,’ he said, Sydney Morning Herald reported.

‘I think if individuals, as leaders, people who are faces of the club such as Eddie McGuire are unable to radically transform the way they are viewing or interacting with the issue of racism either public or privately then they should absolutely step down.’

Lumumba said that since he left the club in 2014 he has always looked for ways to ‘be open in the public’ about his experiences after exhausting other avenues.

Victorian Premier Daniel Andrews came out in defence of McGuire following the report’s release, although he acknowledged that more has to be done to stop the tides of racism.

Mr Andrews was asked whether McGuire should resign in light of the findings, to which he responded, ‘I don’t think running away from challenges is leadership, whether it’s in a footy club or any other role,’ The Australian reported. 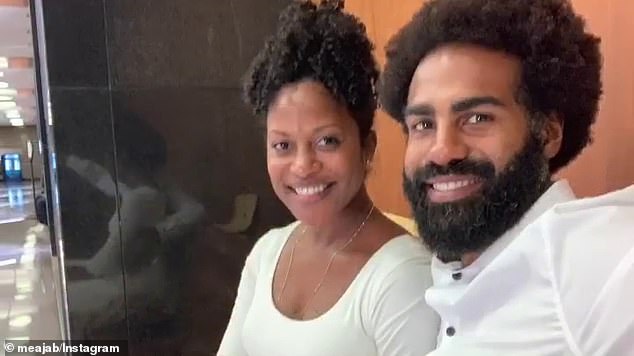 ‘I think yesterday was a sad day, but it was a very significant day. You’ve got to acknowledge these things before you can do something meaningful about it.’

The Premier said he won’t be offering ‘running commentary’ about McGuire calling it a ‘proud day for the club’.

‘What I will say is this though, whether it’s cricket, we’ve seen some pretty nasty incidents this summer, or it’s Aussie rules footy, or any part of our Victorian community and indeed beyond just Victoria, we all have to acknowledge that this is a fact of life, and it’s shameful. We’ve got to do more, all of us.

‘I shouldn’t say it’s ”a fact of life”. It is a reality. It is real, and whether it’s people in the Grampians doing some just awful stuff a couple of weekends ago, or whether it’s the more casual embedded bigotry.

‘It’s harmful, it’s shameful, and we need to do everything we can to change that, and that starts with leadership.

‘And I think running away from challenges is not the way you deliver better outcomes, but again I would just say you’ve got to acknowledge these things first, before you can ever hope to put a plan in place.’

The 35-page report – conducted by two experts in Aboriginal affairs from Sydney’s University of Technology – called for a separate investigation into Lumumba’s claims.

‘While claims of racism have been made across the AFL, there is something ­distinct and egregious about Collingwood’s history,’ the report obtained by the Herald Sun said. 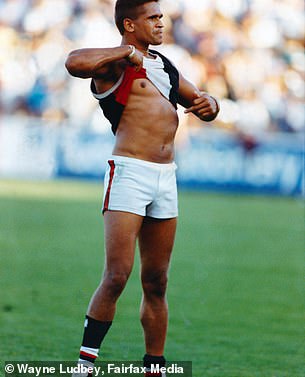 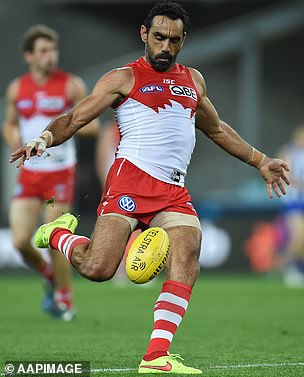 Nicky Winmar lifts his shirt to a feral Collingwood crowd in 1993 after the Saints won at Victoria Park. The image has become iconic in the campaign against racism in sport

‘There is a gap between what Collingwood Football Club says it stands for and what it does.’

Entitled ‘Do Better – Independent review into Collingwood Football Club’s responses to incidents of racism and cultural safety in the workplace’, the report referred to nearly a dozen high-profile allegations of racism at the club.

Included among them was a mention of McGuire’s joke suggestion in 2013 that Sydney Swans Indigenous star Adam Goodes should be used to promote the King Kong musical.

Other incidents named in the report include the moment Nicky Winmar famously lifted his shirt and pointed to his skin after receiving racist slurs from Collingwood’s cheer squad at Victoria Park in 1993.

However, the report also noted the AFL giant had taken ‘important and positive steps’ to address racism within its ranks.

‘It needs to be noted and underlined that, in undertaking this review, the club was unflinching in holding up a mirror to itself.’