iPhone 13 ‘could ditch the notch’ in favour of thicker bezels

Apple is considering ditching the black ‘notch’ at the top of the iPhone for its next flagship model, the iPhone 13, according to an online tipster.

The rectangular black notch, which has featured on flagship iPhone models since 2017, conceals the phone’s front-facing camera components and sensors.

But according to the tipster, who goes by the name Mauri QHD on Twitter, Apple has created an iPhone 13 prototype with no notch at all.

The prototype instead puts these important components at the top of the bezel, the border between a screen and a phone’s frame.

Killing off the notch for good would be welcome news for the thousands of Apple fans who have considered it an unsightly blemish. 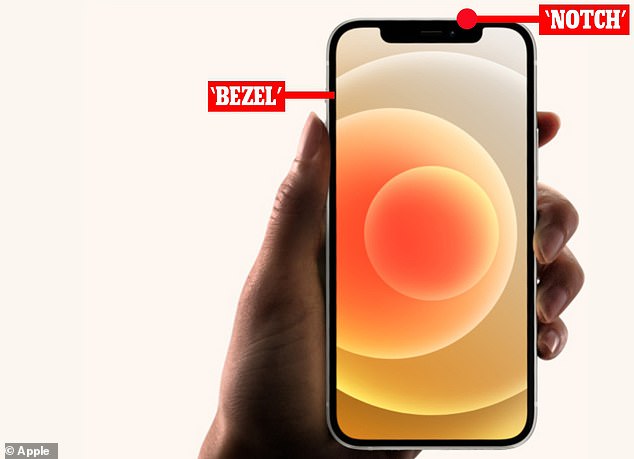 Pictured, the iPhone 12 marking out the notch and the bezel. Zero bezel effectively means the device’s screen blends seamlessly into the edges of the device. The notch’s days may soon be numbered on the iPhone, according to Mauri QHD, an Apple tipster on Twitter

‘There’s a prototype with no notch at all, but – a bit – bigger bezels,’ Mauri QHD tweeted.

All four sides of bezel on the prototype ‘are equally bigger’, he added, meaning the top part of the bezel won’t stick out further than the others.

There’s a chance that Apple’s notch-less design might not be ready for the market until 2022, when the iPhone 14 would be released, he said.

The bezel on the iPhone 12 – Apple’s current flagship phone, which was released last October – is already thicker than that on 2019’s iPhone 11 – but making it just a little larger again would allow Apple to kill the notch. 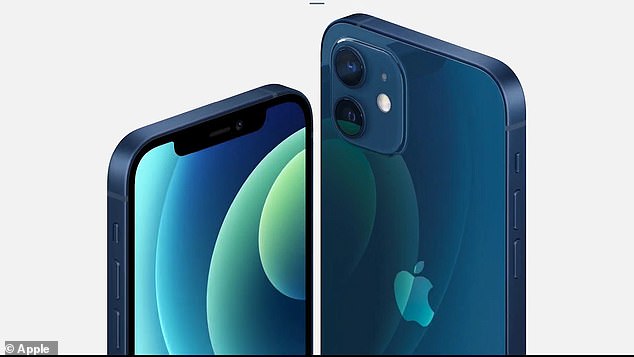 Pictured, the iPhone 12. Note the prominent bezel – the border between a screen and a phone’s frame – and the notch at the top

The sensor-housing notch was first introduced to the iPhone with 2017’s iPhone X – but was mercilessly lambasted by critics and fans alike as a terrible design flaw.

Aside from taking up precious screen space, the notch was too reminiscent of a receding hairline for many balding men.

Apple’s phone-making rival Samsung even mocked the notch in an ad for its Galaxy Note 8 smartphone at the time, featuring a man with a notch-shaped haircut.

Apple has persisted with the notch on subsequent iPhone models since, but it’s likely that the camera technology currently housed inside is now advanced enough to fit within a smaller space – making the notch expendable. 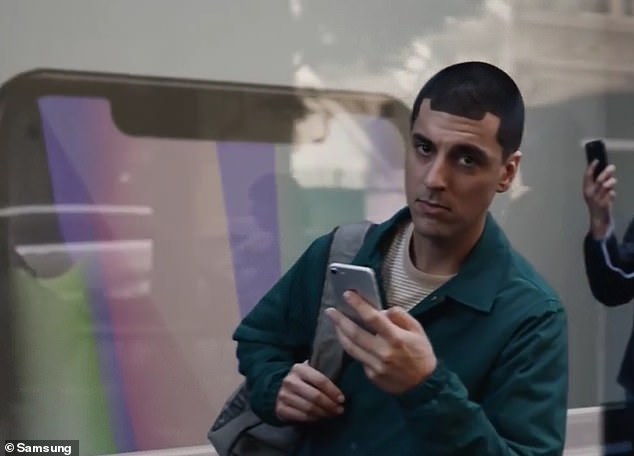 Just three days after the iPhone X went on sale in 2017, Samsung released a new anti-Apple advert, featuring a man queuing up for an iPhone with a notch-shaped haircut

Despite being only a few months since the iPhone 12 was released, rumours surrounding its follow-up are already rife.

A report in January indicated that iPhone 13 would see the return of its Touch ID technology, in the form of an in-screen fingerprint reader.

This would help users unlock their smartphones without having to remove their face masks during the current pandemic.

Apple first introduced Touch ID in 2013 with the iPhone 5S, in the form of a fingerprint reader integrated into the iPhone’s home button.

However, Apple started to move away from this technology in 2017, with the introduction of Face ID in the iPhone X.

According to Bloomberg, instead of reintroducing a Home button, the Touch ID technology would be embedded within the iPhone 13 screen.

Rather than being a replacement for Face ID, Touch ID would be an additional method of unlocking the iPhone, according to the report.