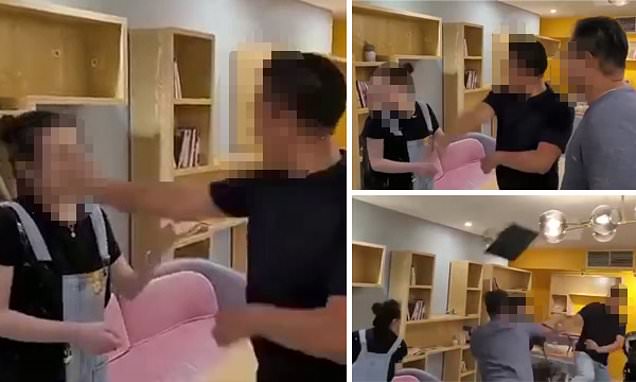 An ‘exploited’ Chinese worker has been violently slapped by her boss after complaining about not getting paid.

The shocking video shows a young female staff member speaking in Mandarin to a man in a grey shirt before a second man wearing a black shirt walks into frame and hits the unprepared woman across the face.

Her head can be seen snapping back due to the force of the blow.

The sickening viral video was met with outrage online and has raised questions about the plight of some Asian workers living in Australia.

In a translation posted by viewers of the clip, the young woman accuses her boss of using free labor.

‘The owner [of the Adelaide tea store in Chinatown] refused to pay $10 an hour wage to a staff member, claiming she was only working during a ‘trial period’ therefore does not deserve any payments,’ the person who filmed the shocking video said.

He added that other types of abuses, such as low wages, no wage ‘trial periods’ and unpaid overtime are ‘extremely common’ in Adelaide’s China’s town.

After the worker is hit she then throws a handbag at the man before motioning to slap him.

He then kicks her in the stomach, knocking her to the ground.

Police have confirmed that an investigation into the incident is now underway.

‘At 9.25pm Friday 29 January police were called to a business on Gouger Street following reports that a woman had been assaulted,’ South Australia Police said.

‘Upon police arrival the suspect had left the scene.

‘The victim a 20-year-old Adelaide woman was treated by paramedics before being transported to the RAH.

‘The suspect is known to the victim and police are investigating.’

The bubble tea shop where the incident took place has not responded to requests for comment.