A mum who tragically lost her unborn child after a speeding drunk driver high on drugs crashed into her car has renewed her desperate calls for the law to be overhauled.

Sarah Milosevic was two days from giving birth when a drunk and drug-affected driver ploughed into the family car minutes from home after a trip to the shops south of Brisbane in August 2014.

Ms Milosevic and her husband Peter launched the Sophie’s Law campaign to recognise unborn babies killed in a criminal act after the driver responsible for the crash that killed their baby girl escaped a jail sentence. 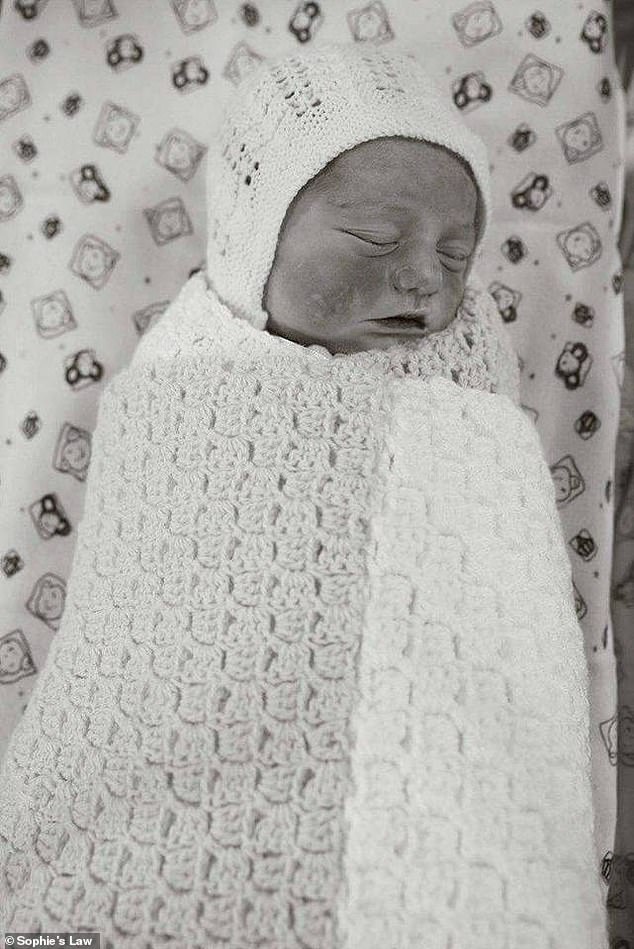 The Milosevics are campaigning for Queensland legislation to be changed to acknowledge unborn babies killed in a criminal act. Their unborn daughter Sophie (pictured) was killed in a crash in 2014

Their campaign has fallen on deaf ears in the Queensland government, despite countless emails and an online petition which attracted more than 100,000 signatures.

The grieving couple have reopened their Change.org petition in the wake of the Alexandra Hills tragedy in Brisbane on Australia Day which claimed the lives of Kate Leadbetter, 31, her boyfriend Matthew Field, 37, and their unborn son Miles.

The alleged driver, 17, has been hit with a string of charges including two counts of murder, but is unlikely to be charged over the death of baby Miles.

Ms Milosevic has since been in touch with Ms Leadbetter’s heartbroken family and has renewed calls for the law to be changed.

‘We were devastated to hear what happened as it brings us back to our own experience and the pain we went through,’ Ms Milosevic told Daily Mail Australia.

‘We always renew the campaign at the start of each year, which everyone has been talking about in the wake of what happened last week.’

Her husband, their toddler Jorja and her stepson Nicholas, then 10, were also in the car.

‘It was just a normal day. I’d spent the day helping out my grandparents and taking them to appointments and was exhausted by the afternoon as I was two days from being induced,’ she recalled.

‘We were coming from the shops and were turning the corner into our street. I looked to my left and said to Peter, “That car is going to hit us.”

‘I knew there was no way Sophie would survive. I couldn’t feel any movement.’ 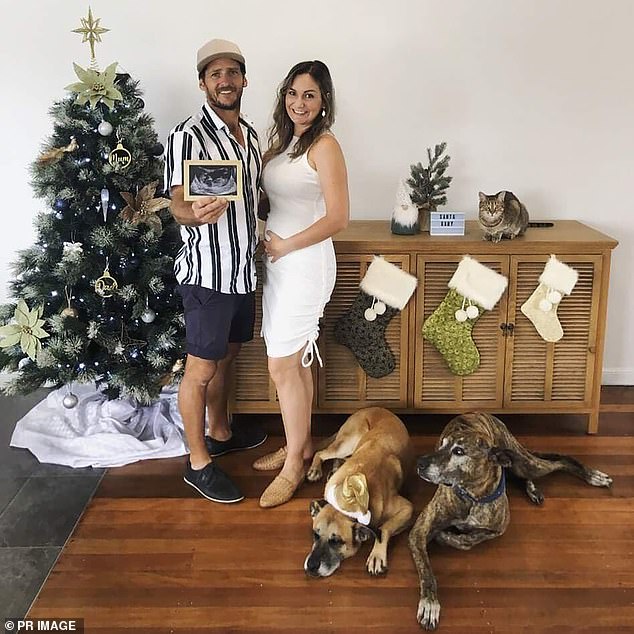 Ms Milosevic has renewed calls for Sophie’s Law to become a reality in the wake of another Brisbane tragedy. Kate Leadbetter, 31, and her boyfriend Matthew Field, 37, (pictured recently) along with their unborn son Miles died after they were allegedly hit by a teenage driver in Alexandra Hills on the evening of Australia Day 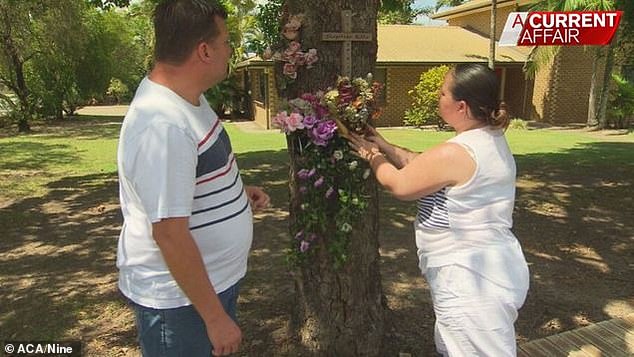 Peter Milosevic and wife Sarah were moments from home when a drunk driver crashed into them  six years ago. They’re at the scene where their unborn baby Sophie was killed

Ms Milosevic fell in and out of consciousness while she was trapped in the wreckage for two hours as paramedics tried to save her and her unborn baby.

‘I left out of sheer will, I had a funeral to plan,’ Ms Milosevic said.

‘I was in and out of hospital for six weeks after the crash.

‘Not a day goes by when we don’t think of Sophie and the little girl she’d be today had she survived.

The Milosevics have since welcomed a third daughter, Olivia, 4.

Almost seven years on, she’s still angry with the driver responsible for the crash, who was fined $950 and had his licence suspended for five months.

He was not held responsible for Sophie’s death, despite her being included in Queensland’s 2014 road toll. 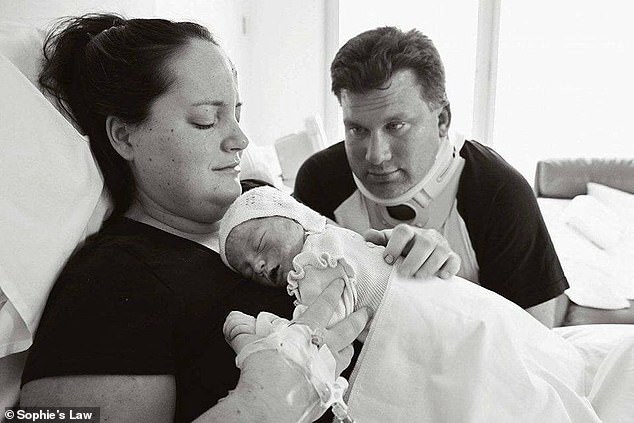 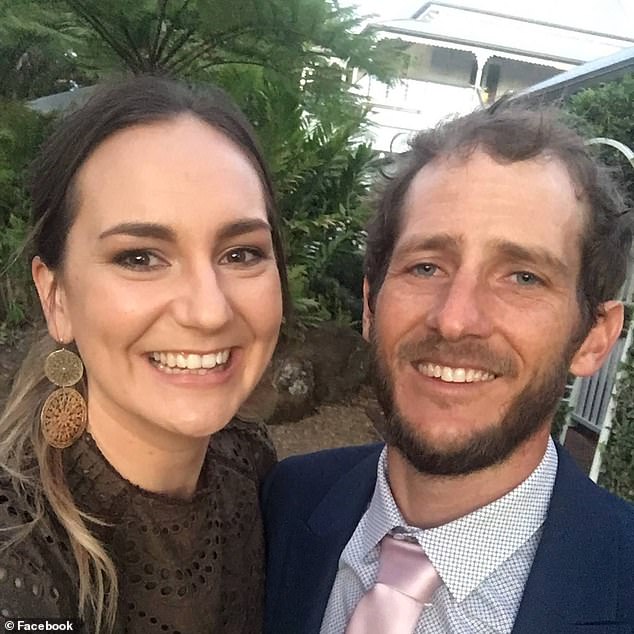 She has pleaded with Queensland Premier Annastacia Palaszczuk and the state’s Attorney General to meet with her to discuss Sophie’s Law, which has been tried and tested overseas.

It’s similar to Zoe’s Law, a NSW campaign started by Brodie Donegan, whose unborn daughter died in 2009 when she was hit by a drug driver while walking.

‘I’m not doing this just for me or for my baby, I’m doing this so other families can get justice,’ Ms Milosevic told Daily Mail Australia.

‘The law is ready to go and has been tried and tested overseas.’

‘I don’t care if it’s not named after Sophie, as long as the law is changed.’

Ms Milosevic has been left frustrated by her dealings with the Queensland government.

‘I want the Premier and the government to sit down and listen to us, hear what we’ve been through, look at pictures of Sophie and our injuries and see Sophie’s ashes,’ she said.

‘She was a real human being and should be counted.’

Ms Milosevic has been inundated with messages since renewing awareness for Sophie’s Law on A Current Affair on Tuesday night.

The overwhelming public support inspired to her reopen the Change.org petition, where the tally now stands at more 127,000 signatures. 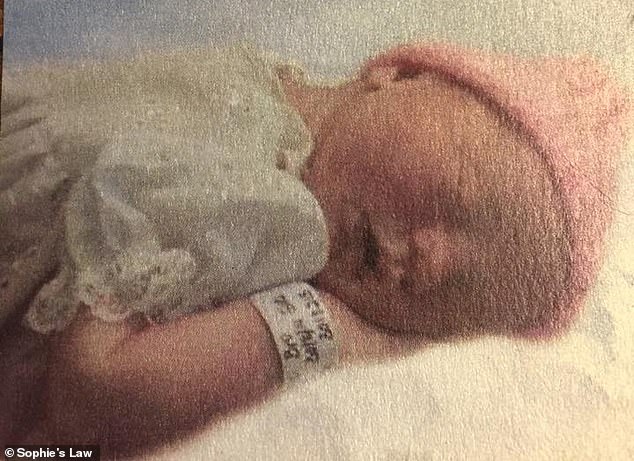 Not a day goes by when we don’t think of Sophie and the little girl she’d be today,’ Sarah told Daily Mail Australia. Pictured is her daughter in August 2014 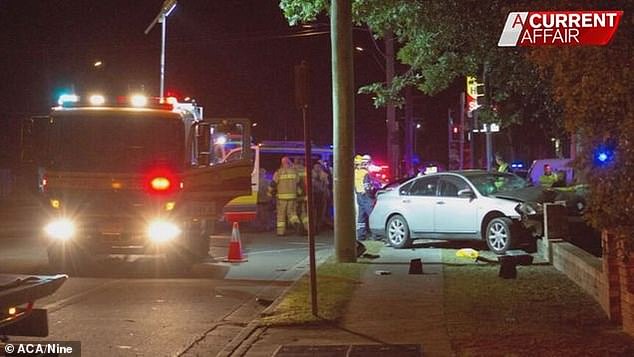 Sarah Milosevic was 39 weeks pregnant and two days from being induced when a crash claimed the life of her unborn baby.  Pictured is the crash scene

‘I want all babies of any gestation to have the right to be classed as a human being,’ the petition states.

‘I want pregnant women protected against acts of violence and against their babies dying because of an avoidable cause.

‘Sophie should be alive but because of a careless act caused by a driver that does not care, he holds no responsibility for his action and walks free.

‘All babies born past 20 weeks gestation need to have a birth certificate, a death certificate and also a funeral. So why is it that only in a court of law, does a baby have no rights to be counted?’ 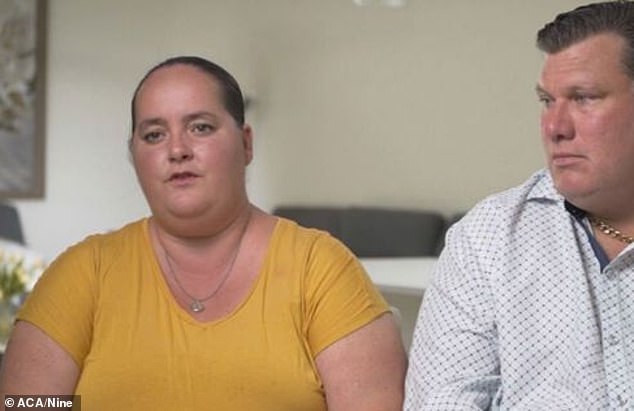 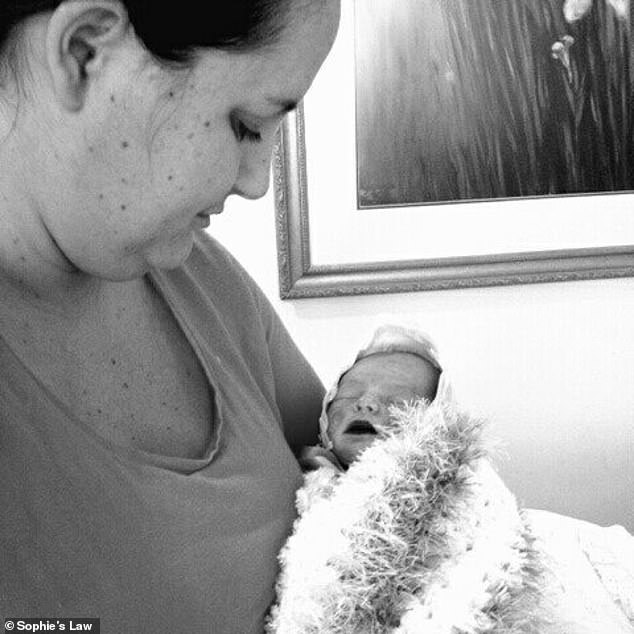 Sarah was seriously injured in the crash but left after five days to plan her daughter’s funeral. She’s pictured holding Sophie in hospital