Sinéad O’Connor asks fans to pray for the ‘light of her life’ son Shane, 16, after ‘day from hell’

Sinéad O’Connor has asked her fans to pray for her teenage son Shane in a worrying cryptic post on Twitter.

The Irish singer, 54, who shares her son with ex Donal Lunny, revealed that she’d had a ‘hideous day from hell’ as she made the appeal on Monday.

While not disclosing what had happened, she wrote: ‘Any spare prayers out there, pls stick one in for my son, Shane. The very light of my life.’ 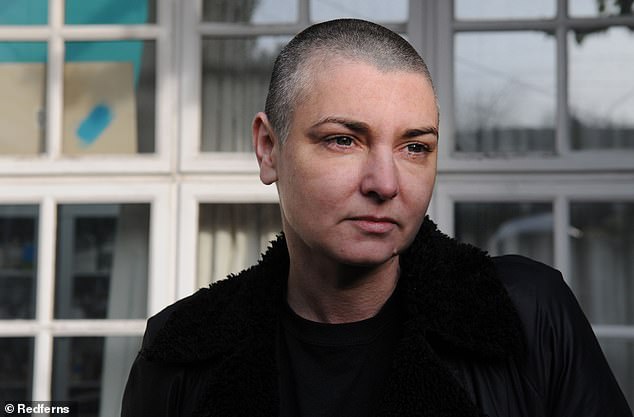 ‘Day from hell’: Sinéad O’Connor has asked her fans to pray for her teenage son Shane in a worrying post on Twitter

Cryptic: Sinéad called Shane the ‘light of her life’ as she asked fans to pray for him after saying she’d had a ‘hideous day from hell’ in a previous tweet

The mother-of-four added in another tweet: ‘Hideous day from hell.’  Several fans responded to Sinéad’s tweets, sending their well wishes and saying they’d be thinking about Shane.

Sinéad, who changed her name to Shuhada’ Davitt in 2018, has previously appealed for help with her teenage son after he went missing in January 2019.

She tweeted at the time: ‘My sweet 14 yr old son has been going missing a lot and is currently missing for the last two days. 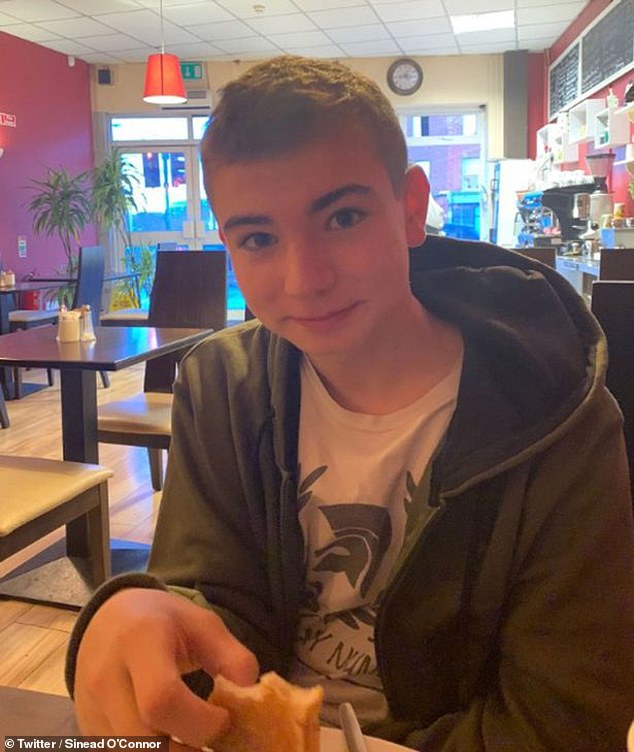 ‘If you are a parent in whose house he has been staying or is staying, please call Dundrum Gardai. Not calling them is not helping him.’

Shane was eventually found ‘safe and well’ three days after going missing from their Dublin home.

Sinead has been married four times and has four children.

Her eldest son is 33-year-old Jake Reynolds, whose father is Donal Reynolds. They married in 1987 before splitting in 1991.

Her daughter Roisin, 24, is the result of her relationship with journalist John Waters. She never lived with John and they fought for custody of their daughter before it was decided she would live with him in Dublin. 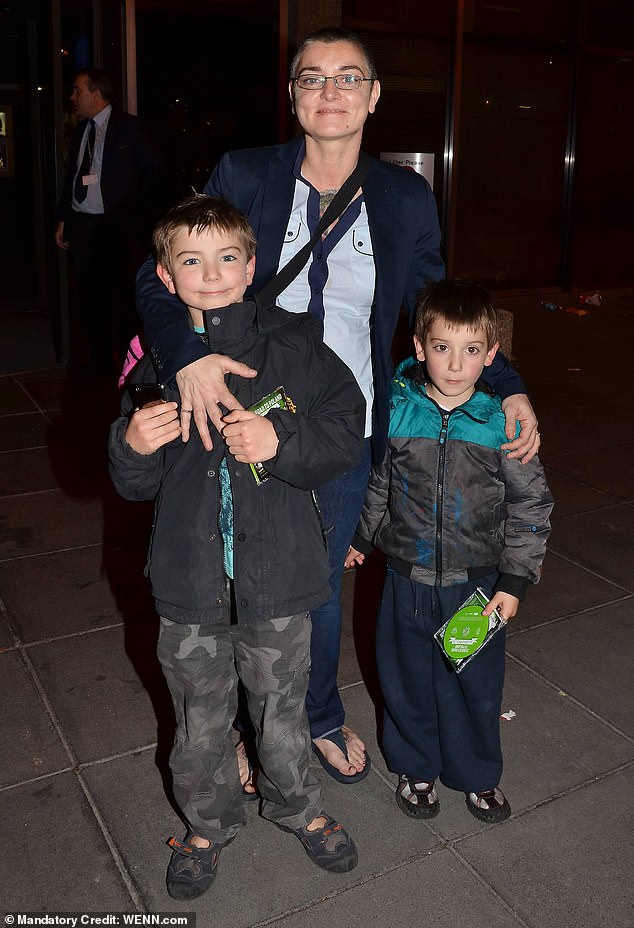 Previous scare: The singer also appealed for help on Twitter in 2019 after Shane went missing, later updating fans that he’d been found ‘safe and well’

Sinead’s children, their fathers and her husbands

FATHER: Music producer John Reynolds, who she married in 1987, before splitting in 1991

FATHER: Journalist John Waters. Sinead never lived with John and they fought for custody of their daughter before it was decided she would live with him in Dublin.

FATHER: American businessman Frank Bonadio. She split from Frank in 2007, a year after Yeshua’s birth.

Her youngest child is 14-year-old Yeshua Francis Neil Bonadio, who she shares with American businessman Frank Bonadio. They split in 2017, a year after his birth.

It comes after the singer announced that she has cancelled her upcoming tour dates to enter a ‘one-year programme for trauma and addiction’.

She revealed the news last November after saying she had ‘lost someone beloved’ and had endured a ‘traumatic six years.’

Sinéad admitted she had been ‘addicted to weed for 34 years’ but ‘became briefly addicted’ to another drug following her loss.

The singer uses two Twitter accounts, one managing her professional business with an official blue tick and another under her Islamic moniker Shuhanda Sadaqat, which she used to make the announcement.

Apologising to her fans in a heartfelt statement, she wrote: ‘Message for folks who have tickets for next year’s shows: those shows are being postponed until 2022 so that I may go into a one year trauma and addiction treatment program because I had a very traumatic six years and this year was the end of it but now recovery starts.’

She continued the lengthy thread: ‘This year I lost someone beloved and has affected me so badly that I became briefly addicted to a drug other than weed.

‘I have been addicted to weed for 34 years. A lifetime. I grew up with a lot of trauma and abuse. I then went straight into the music business.

And never learned really how to make a normal life. Never took proper time to heal. Wasn’t ready to either.’

The Nothing Compares 2 U hitmaker then pleaded with her fans to be ‘supportive’ and keep hold of their tickets for 2022, when she vowed to return with a new album.

But she also added that her four shows in Ireland will not be cancelled ‘unless Covid prevents them’ as she does not need to leave the ‘country or rehab to do those’. 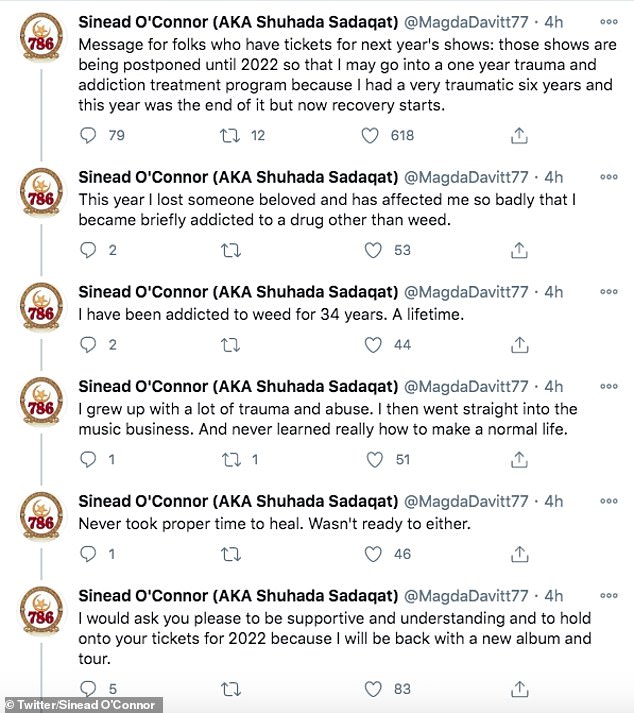 Treatment: It comes after Sinéad opened up about her ‘traumatic six years’ in a lengthy thread to her fans, revealing that she has been ‘addicted to weed for 34 years’