It was originally scheduled to go ahead on centre court at Rod Laver Arena right after the quarter final showdown between Rafael Nadal and Stefanos Tsitsipas.

As they were taking the court at 7:15pm, the Australian excitedly Tweeted out that his wheelchair tennis final would be televised in ‘prime time’ when their match was over.

But as the clock ticked past 11:15pm with Nadal and Tsitsipas still locked in a marathon five set thriller, the decision was made to start the wheelchair tennis final on Margaret Court.

By the time Tsitsipas won the gruelling battle and the Australian dual international was on air, most tennis fans had already gone to bed. 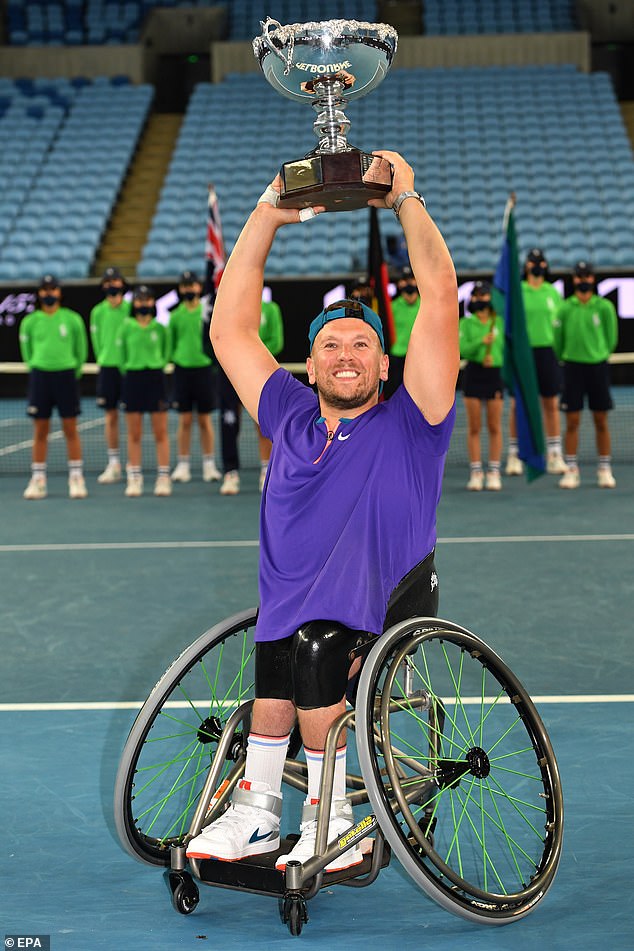 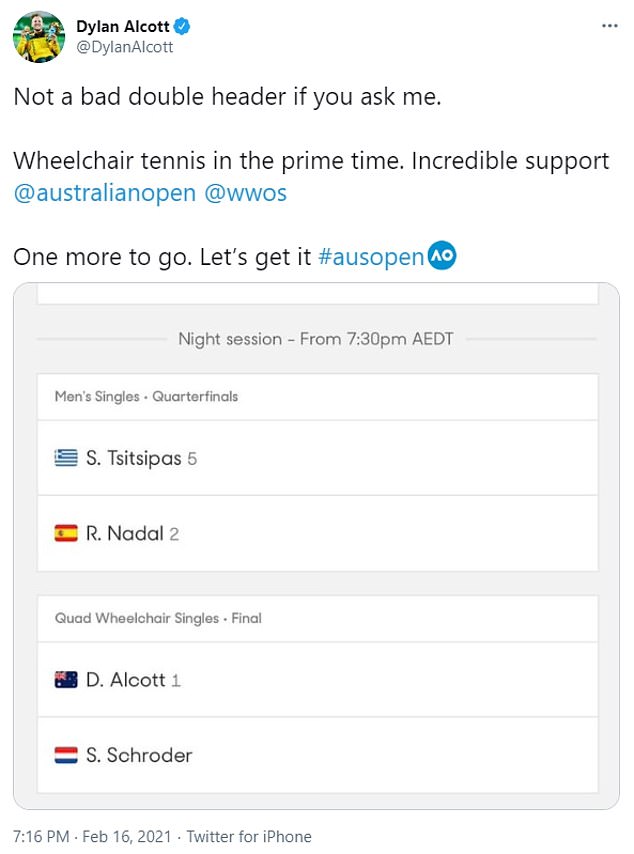 Journalist Rachel Riley wrote: ‘Disappointed I won’t get to see Dylan Alcott play tonight because it’s on so late. An Aussie champion playing in the final of the Australian Open should be prime time to entertain/inspire so many. Take nothing away from the game on now. Just want to see the best of all abilities.’

Jake Bozinovski said: ‘What a pathetic decision for Tennis Australia to reschedule tonight’s Dylan Alcott’s game to be played at Margaret Court Arena, it should’ve been for tomorrow so the fans could be there to witness the final, absolutely disgraceful.’

AFL reporter Tom Browne wrote: ‘Sending Alcott out at 11.13pm is so strange.’

Making the situation even more lacklustre for the charismatic 12-time Grand Slam winner was that there was no crowd to cheer him on due to Victoria’s five-day Covid lockdown which officially ended at midnight. 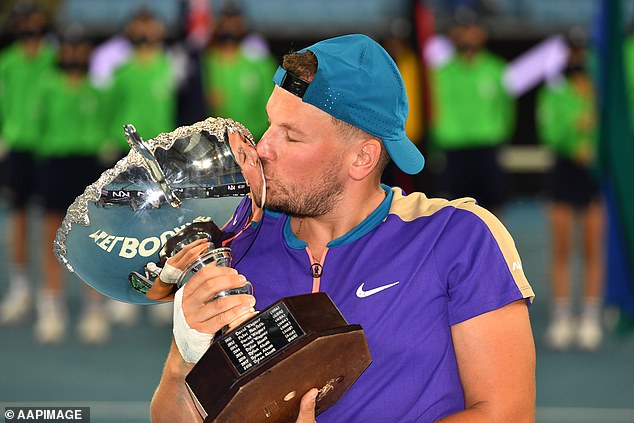 Dylan Alcott of Australia kisses the winners trophy after defeating Sam Schroder of the Netherlands during the Men’s Quad Wheelchair singles final match on Day 10 of the Australian Open at Melbourne Park, on February 17, 2021 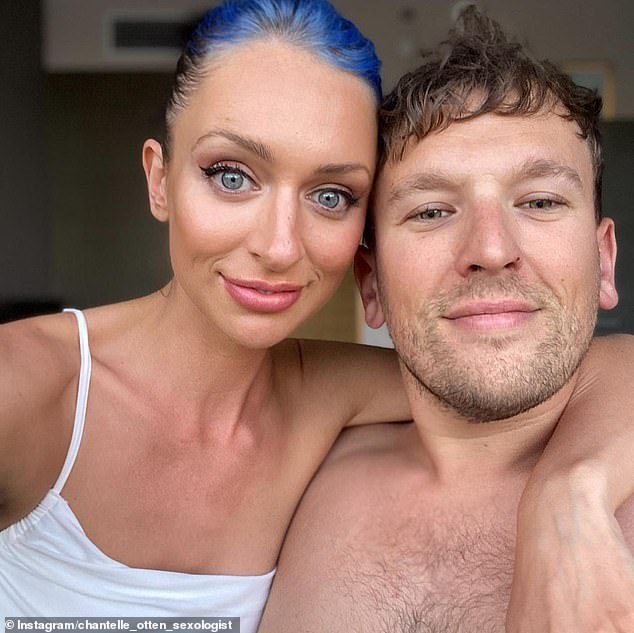 But the London Paralympics wheelchair basketball silver medalist was all class when asked if the lack of spectators was playing on his mind.

‘We are so lucky to be playing tennis at the moment,’ Alcott told reporters.

‘I feel very grateful to be here. When other people can’t do their jobs, have lost loved ones, lost their jobs, can’t travel, are in lockdown…. I’m just lucky to be here. I’m thinking like that.’

Now towards the end of his glittering career, he celebrated by sinking a couple of beers for the first time since Christmas Day, leaving the natural showman in a familiarly exuberant mood post match.

Alcott said his focus now shifts to gold at a rearranged Paralympic Games in Tokyo this year. 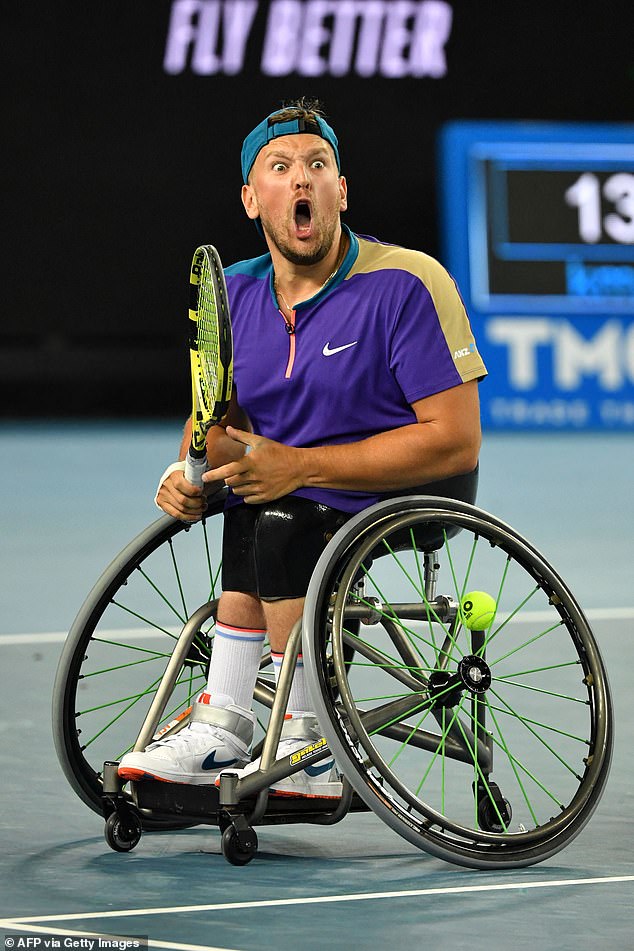 ‘Once, every four years people with disability are the stars.

‘People say, ‘why not have the Paralympics and Olympics combined?’

‘I’m like, ‘when Usain Bolt was running, I fully appreciate everyone will watch him and not me. But guess what? When I’m on, we’re the stars, right?’

‘That’s why I love the Paralympics. For two weeks, it’s the big show.’

Alcott said he is also exploring his options in show business.

‘It’s not because I’ve lost the passion to play tennis but I do TV, radio, I’ve got my foundation, couple of companies. I do so many things, right? There’s only so long you can spin all the plates for,’ he said.

‘I want to do some acting, I want to write a script. I want to do all kinds of stuff. And it’s hard to do it all at once.’ 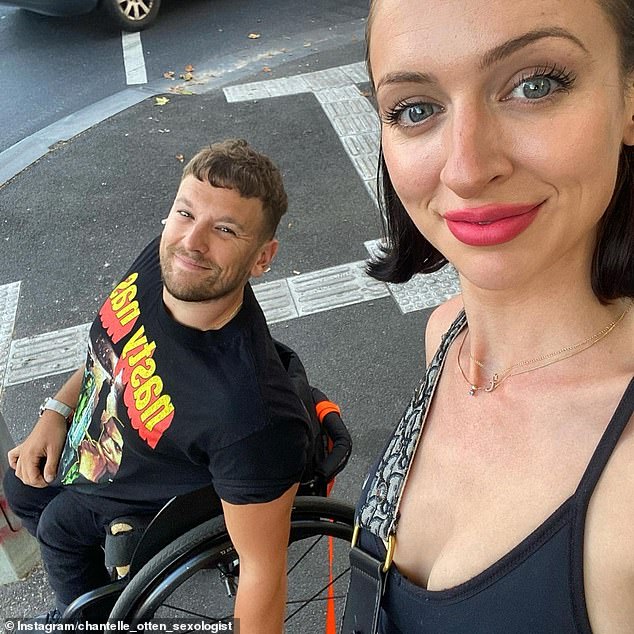