Australian government officials have rounded on Facebook’s news ban as an ‘assault on a sovereign nation’ with Prime Minister Scott Morrison declaring the episode confirms the world’s fears about big tech companies.

The US-based social media giant banned its 13 million users in Australia from accessing any news reporting at all on Facebook in a drastic response to imminent media laws.

From Thursday, when Australians went to reliable Facebook news accounts they were met with a message saying ‘no posts’ were available. Even overseas news was hidden.

The Orwellian deletion of an entire continent’s news sparked furious condemnation from Cabinet ministers – one who likened the drastic move to an act of war – and declared the government will stare down the tech giant.

Prime Minister Scott Morrison said: ‘Facebook’s actions to unfriend Australia today, cutting off essential information services on health and emergency services, were as arrogant as they were disappointing.’

Mr Morrison said the Federal government won’t be intimidated. ‘These actions will only confirm the concerns that an increasing number of countries are as expressing about the behaviour of BigTech companies who think they are bigger than governments and that the rules should not apply to them.

‘Facebook has taken steps which are unprecedented and reprehensible, unacceptable in a democracy such as this and an abuse of their power.’

The move followed a series of calls between Mr Frydenberg and the Facebook founder over the past week and a sense in government circles that the social network was close to deals with media organisations.

‘Facebook was wrong. Facebook’s actions were unnecessary. They were heavy-handed and they will damage its reputation here in Australia,’ Mr Frydenberg said. ‘We certainly weren’t given any notice by Facebook.’

The Government’s proposed law which so unsettled Facebook would create an arbitration panel to set a binding price for news in cases where tech giants failed to reach deals with media companies whose original journalism they linked to.

Facebook executives feared giving in to the laws could set a global precedent where it was forced to pay to distribute news.

But now news is banned altogether Down Under and media scholars fear disinformation will now run rampant on Facebook.

Google, too, had threatened to pull its search engine from Australia but backflipped in recent weeks, striking deals with Rupert Murdoch’s News Corp and Nine Entertainment. 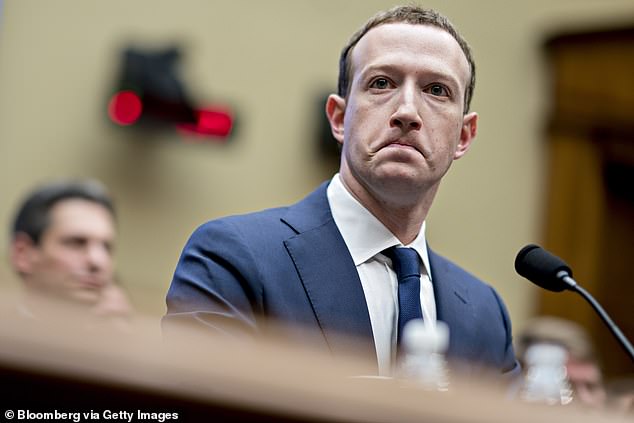 Facebook should be ‘sent-packing’ from Australia for stifling free speech after it banned news content, according to Nationals Senator Matt Canavan. Pictured: CEO Mark Zuckerberg 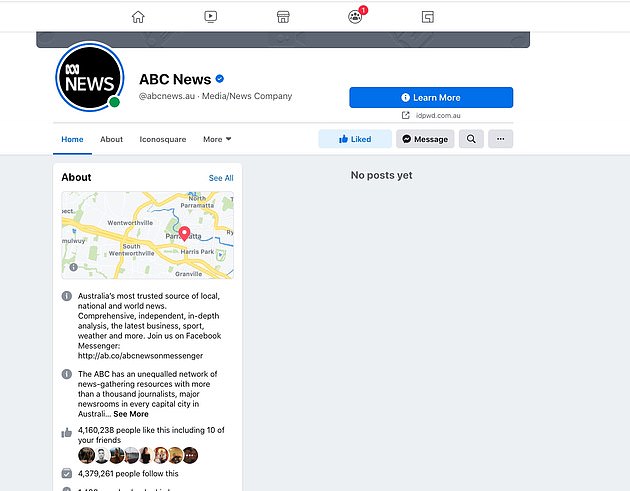 The Facebook page for Australia’s public broadcaster, the ABC, now appears like this – saying ‘no posts yet’ 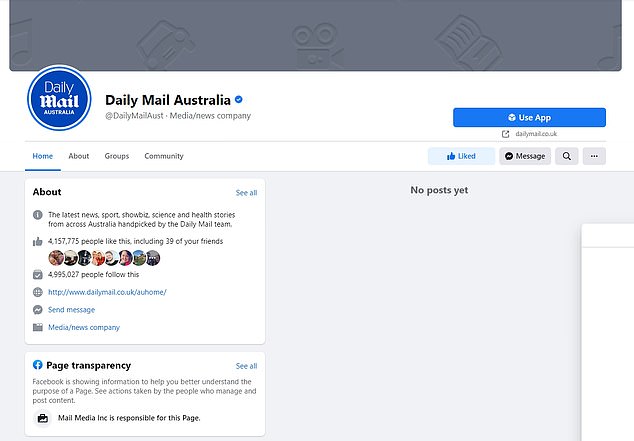 ‘The code is not yet in the law, so it raises an obvious question, why are they doing this now?’ Mr Fletcher said.

And while the Government has offered to ‘work with’ Facebook, there is little chance the laws – which have won support across the political aisle – will be significantly watered down.

‘The Australian people and its government will not be bullied by some big tech company that is putting people’s lives at risk and putting profits ahead of people,’ Agriculture Minister David Littleproud said.

Greens Senator Sarah Hanson-Young – rarely on the same side of politics as Mr Joyce – lambasted Facebook as ‘Fake Book’.

Facebook’s actions to unfriend Australia today, cutting off essential information services on health and emergency services, were as arrogant as they were disappointing. I am in regular contact with the leaders of other nations on these issues.

These actions will only confirm the concerns that an increasing number of countries are expressing about the behaviour of BigTech companies who think they are bigger than governments and that the rules should not apply to them. They may be changing the world, but that doesn’t mean they run it.

We will not be intimidated by BigTech seeking to pressure our Parliament as it votes on our important News Media Bargaining Code. Just as we weren’t intimidated when Amazon threatened to leave the country and when Australia drew other nations together to combat the publishing of terrorist content on social media platforms.

I encourage Facebook to constructively work with the Australian Government, as Google recently demonstrated in good faith. 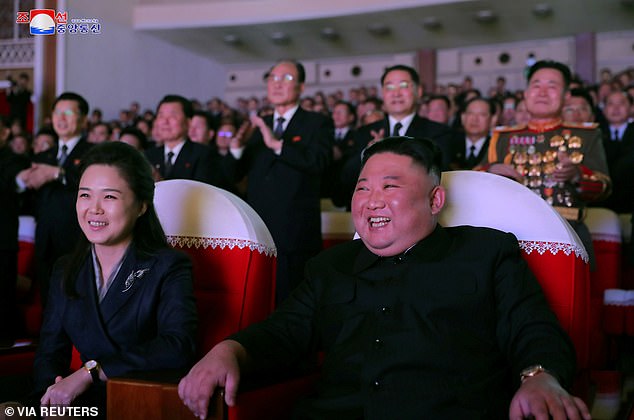 Thursday’s news ban was spectacularly botched with organisations as diverse as health departments, domestic violence charities, the Australian Council of Trade Unions and the country’s main source of weather information, the Bureau of Meteorology, banned from posting.

Facebook said that was a mistake – but blamed the broad definition of news in the forthcoming laws.

‘The actions we’re taking are focused on restricting publishers and people in Australia from sharing or viewing Australian and international news content,’ a spokeswoman said.

‘As the law does not provide clear guidance on the definition of news content, we have taken a broad definition in order to respect the law as drafted. However, we will reverse any pages that are inadvertently impacted.’

Minister Fletcher has insisted the government will not back down and said the publisher could either abide by Australia’s laws or leave the country.

The law passed the House of Representatives on Wednesday night and looks set to pass the Senate within days.

However, Mr Fletcher didn’t rule out making some tweaks to the code.

FACEBOOK’S CHANGES TO NEWS IN AUSTRALIA

Facebook has restricted publishers and social media users in Australia from sharing or viewing Australian and international news content.

What does this mean for Australian news organisations?

Facebook said they will continue to provide access to other standard services, including data tools and CrowdTangle

What does this mean for international news organisations?

A release from the company says: ‘The proposed law fundamentally misunderstands the relationship between our platform and publishers who use it to share news content.

‘It has left us facing a stark choice: attempt to comply with a law that ignores the realities of this relationship, or stop allowing news content on our services in Australia.

‘With a heavy heart, we are choosing the latter.’

It adds: ‘We were prepared to launch Facebook News in Australia and significantly increase our investments with local publishers, however, we were only prepared to do this with the right rules in place.’

Satirical news sites including the Betoota Advocate, The Shovel and The Chaser have been been caught up in Facebook’s ban on Australians sharing news.

Discussions between Mr Frydenberg and Mr Zuckerberg on Sunday led the former to believe a deal was imminent.

‘They are very focused on what’s happening here in Australia, but I sense they are also trying to reach deals, and that is welcome,’ Mr Frydenberg said.

A government-controlled senate committee has already recommended the new bargaining code, which affects digital platforms and news media, be passed. 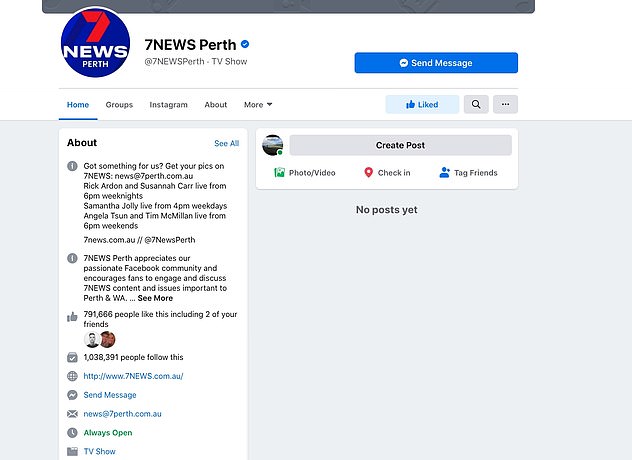 The move is a response to the country’s proposed Media Bargaining law, which forces tech companies like Facebook and Google to negotiate with news providers to feature their content (pictured: A blank news site on Facebook)

Google has also threatened to shut down its search engine in the country to avoid ‘unworkable’ content laws.

On Thursday, the search engine giant signed a global deal to pay for content from Rupert Murdoch’s News Corp after Australian media companies negotiated terms with the tech giant.

The Silicon Valley behemoth has been making hasty arrangements with Australian media firms after lawmakers said they would consider forcing Big Tech to pay for the content it reproduces on its platforms.

News Corp said it would receive ‘significant payments’ from Google in its three-year agreement, which wraps in the Times and the Sun newspapers in the UK, the Wall Street Journal and New York Post in the US, and Sky News TV channel in Australia.

The deal spans audio and video and News Corp will also get an ad revenue share from Google.

News Corp chief executive Robert Thomson thanked Australian officials in a statement, saying they ‘have stood firm for their country and for journalism’.

Mr Frydenberg confirmed earlier on Wednesday that the state-owned Australian Broadcasting Corporation was also in negotiations and planned to spend any Google revenue on regional journalism.

‘There are negotiations going on with all the major players and the minor players at the moment,’ Mr Frydenberg said.

‘This will help sustain public interest journalism in this country for years to come.’

Mr Frydenberg said ‘none of these deals would be happening’ if not for proposed legislation to create a so-called News Media Bargaining Code.

Politicians were debating amended legislation to create the code in the House of Representatives on Wednesday.

‘Everything that I have heard from parties, both in the news media business and in terms of digital platforms, is that these are generous deals,’ Mr Frydenberg said.