Is YOUR child video chatting with strangers?

Parents are being warned over the dangers of a popular chat website used by children as young as eight that randomly pairs strangers for one-on-one conversations.

US-based Omegle, a rival to video chat service Chatroulette, facilitates private text or video chat sessions between strangers who speak anonymously using the names ‘you’ and ‘stranger’, meaning you have no control over who you talk to.

Although the website says it is for users aged 18+, there is no registration or age verification process in place. Users do not even need to input their date of birth before they are paired with a random stranger to chat.

Child protection groups including the Internet Watch Foundation and the NSPCC are concerned about the risk of predators using the site to gather child sexual abuse material or to expose themselves to children.

Omegle was founded in 2009 but has seen a surge in UK users over the last year. This is partly due to the TikTok trend of sharing recordings of Omegle conversations.

One anonymous parent told the BBC how her eight-year-old daughter logged onto the site after seeing it on TikTok and found herself paired with an ‘older man’ who asked her to ‘shake her bum’ and ‘take off her top and trousers’ on camera. 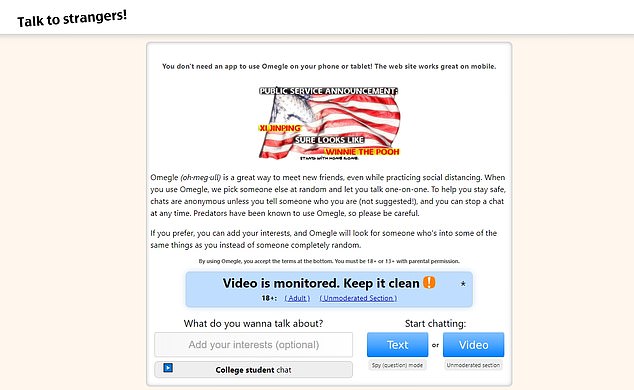 Omegle, a rival to video chat service Chatroulette, facilitates private text or video chat sessions between strangers who speak anonymously using the names ‘you’ and ‘stranger’, meaning you have no control over who you talk to

The Omegle homepage states: ‘Predators have been known to use Omegle, so please be careful.’

In response to the BBC findings, Omegle co-founder Leif K Brooks said site had increased moderation efforts in recent months and that users ‘who appear to be under 13’ are blocked. MailOnline has contacted Omegle for comment.

Users have the option of selecting ‘text’ or ‘video’ chat and can choose to be matched with users based on a shared interest, which is indicated by a generic search term like ‘football’ or ‘fashion’. Otherwise chat pairings are random.

The website was founded in March 2009, a few months before Chatroulette, but has seen a surge in popularity over lockdown. 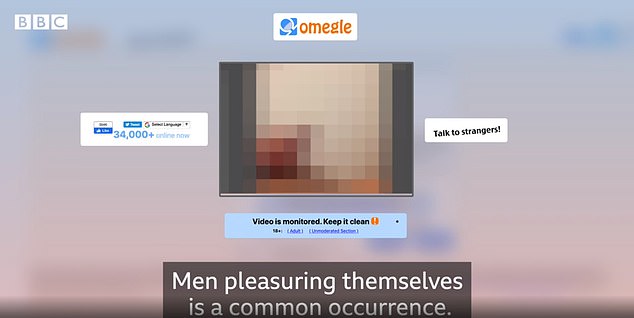 There were 65million monthly visits to the site in January 2021, compared to 34million visits in January 2020, according to data by Semrush. In the UK alone, traffic increased by 61 per cent.

The spike in visitors is at least partly due to a rise in the number of TikTok videos featuring Omegle conversations. Celebrities including Diplo use the website to randomly connect with fans, film the exchanges and share the videos on TikTok.

How does Omegle work?

Users select between a ‘text’ or a ‘video’ chat option.

There is no registration or age verification process in place.

Within seconds the user is matched with another random user who is online at the same time.

Once the chat is ended by one of the parties, the user has the option of immediately joining a new chat with another user.

Users have the option of being paired based on shared interests, which are indicated with a broad term like ‘football’ or ‘fashion. Otherwise the chat pairings are generated randomly.

However more often it is random people paired for chats, some with sinister intentions.

Chris Hughes, hotline director at the Internet Watch Foundation, which is responsible for finding and removing images and videos of child sexual abuse online, told the BBC: ‘We have found self-generated abuse material elsewhere on the internet which has been created by predators who have captured and distributed footage from Omegle.

‘Some of the videos we’ve seen show individuals self-penetrating on webcam, and this type of activity is going on in a household setting often where we know parents are present. There are conversations that you can hear, even children being asked to come down for tea.’

Net-Aware, the NSPCC’s guide to apps, games and social media sites, has given Omegle a ‘very poor’ safety rating, while scores of parenting websites urge parents not to let their children use it.

In an email response to the BBC, founder Mr Brooks said his site was moderated and that users who ‘appear to be under 13’ are blocked.

He said: ‘While perfection may not be possible, Omegle’s moderation makes the site significantly cleaner, and has also generated reports that have led to the arrest and prosecution of numerous predators.’

He described these explicit pornographic ads as ‘discreet’. He added: ‘Omegle isn’t intended for prurient interests, and when adults visit Omegle with that intent, it makes sense to direct them somewhere more suitable.’