Martin Lewis has revealed an easy trick to know exactly how much money you should be putting into your pension pot each year.

The finance expert shared his ‘rule of thumb’ on what percentage of your salary to put away on last night’s episode of ITV’s The Martin Lewis Money Show Live.

So if you started paying into your pension at 30, you should halve that number, and pay 15 per cent of your annual salary. Meanwhile, f you started saving at 40, then expect to pay 20 per cent a year to ensure a decent retirement sum. 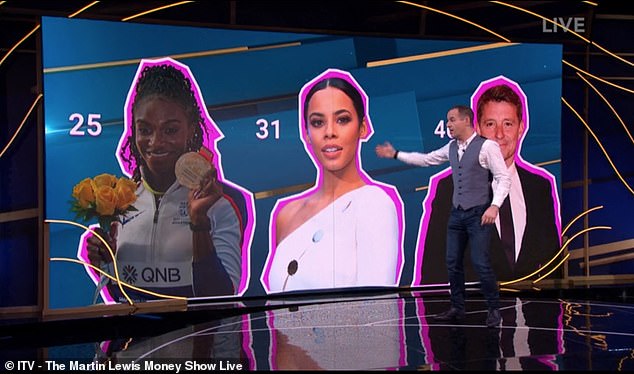 Martin Lewis (pictured) has revealed an easy trick to know exactly how much money you should be putting into your pension pot; using pictures of celebrities to illustrate his point 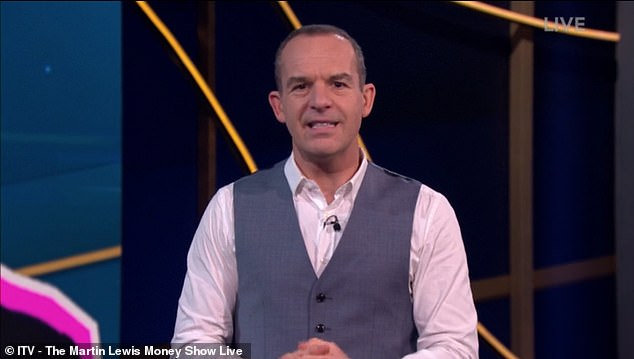 The London-based finance expert last night appeared on his ITV programme, The Martin Lewis Money Show Live, where he shared his ‘rule of thumb’ on how much to save

He admitted that while ‘very few people’ can afford to put away this percentage of their salary, the earlier you start putting money away for later in life ‘the better’.

‘So let me give you the rough rule of thumb’, explained Martin. ‘The rule of thumb is to get roughly two thirds of your final salary each year in retirement.

‘You’d need to take the age you start contributing to your pension, halve it, and put that percentage of your salary in for the rest of your life.’

Martin and co-host Angelica worked out that a 25-year-old should be putting away 12 and a half percent of their salary for the rest of their life.

Started your pension at 30? Then commit to 15% of your annual salary for a decent retirement sum

Martin Lewis says his ‘rule of thumb’ on how much to save for a pension is to gain roughly two thirds of your final salary each year in retirement.

How to do it? Firstly, take the age you started paying into your pension pot. Half this number and put that percentage in for the rest of your life.

So if you started paying into your pension at 30, you would pay 15 per cent of your annual salary until you retire.

Meanwhile, someone under 31 who has already started paying into their pension pot should save 16.5 per cent and a 46-year-old should be saving 23 per cent of their salary.

Martin accepted that the rates may seem high to viewers, but encouraged them to save whatever they can, even if it’s  £10 or £20 a month, to allow the money time to compound interest.

‘I know what you’re thinking’, he said, ‘You’re doing that equation for yourself and you’re saying there is absolutely no way I could afford that.

‘But the real message I want you to get out of that is the earlier you start contributing to your pension, the better. The less of your salary you have to put in.

‘Even £10 or £20 a month – because it’s got time to compound and that will make you a much better retirement.

Martin later explained how auto-enrolment means the majority of employees over the age of 22 can  automatically save for retirement.

The current state pension is £175.20 a week – however many will be saving into private workplace pensions which automatically kick in when you’re earning over £10,000 and aged 22 or above.

‘This means that if you are an employee, you are almost automatically contributing into a pension.

‘The total amount you must pay in is 8 per cent of your salary – 3 per cent of this must be from your employer’, Martin said.

Viewers were quick to take to Twitter to praise the finance expert, with several admitting they had no idea they should be putting so much of their salary aside 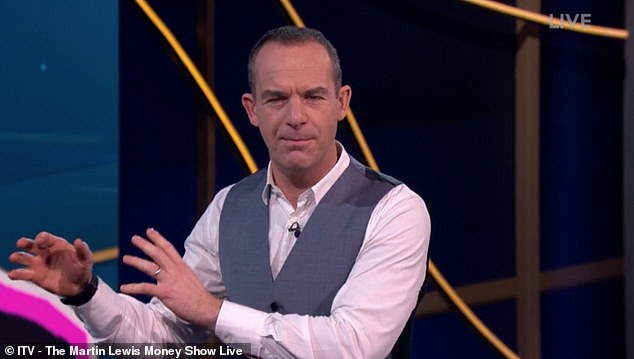 Martin accepted that the rates may seem high to viewers, but encouraged them to save whatever they can to allow the money time to compound interest

Viewers were quick to take to Twitter to praise the finance expert, with several admitting they had no idea they should be putting so much of their salary aside.

‘The Martin Lewis Money Show is the highlight of my Thursdays, notes notes notes!’, said one.

Another wrote: ‘Oh god. Got the Martin Lewis Money Show on and I should be putting in 15% of my wage into my pension really. It’s the age you started, then half it. That’s the %.’

A third viewer commented: ‘Martin Lewis programme on pensions interesting if you missed it’, wrote another.’

Broker Interactive Investor’s Great British Retirement Survey found one in five people aged 60 to 65 believe they will need to delay retirement because of the pandemic’s impact on their pension pots.

Nearly one in four said they feared they would now never be able to retire. It also revealed that 21 per cent were more likely to do some form of paid work in retirement in order to offset investment losses linked to the pandemic. 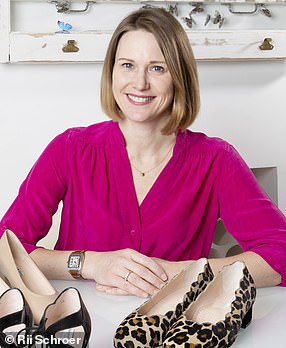 Katie Owen, from West London, says she’s decided to no longer pay into a pension, preferring to invest in her business instead

And 44 per cent of people still working in retirement said they did it because they enjoyed it, rather than for financial need — up from 37 per cent last year.

Becky O’Connor, head of pensions and savings at Interactive Investor, says: ‘Going downstairs and putting the kettle on before heading into the study is a far more manageable daily commute than the one many older workers find so grinding.

‘Working from home makes continuing past retirement age more appealing for some people, who like the idea of carrying on but were previously put off by the slog of getting to a workplace and home again every day.

If you take the physical strain out of working life, as home-working can, the possibility of carrying on with work for longer becomes real.

‘The working-from-home revolution could be wonderful for those who want to carry on working, but have had enough of office life.’

Katie Owen can no longer see herself retiring after the pandemic forced her to throw everything at her luxury shoe firm.

When the virus crisis broke out last year, the married mum-of-two, 43, feared she might lose her business, which specialises in formal, wide-fit women’s shoes.

The challenge forced her to expand the company, Sargasso & Grey, into casual wear. Katie, from West London, put her savings in the firm and now considers it her pension.

She says: ‘Covid could have been really disastrous for me but what I have realised is it encouraged me to really go for it with the business and take the risk, not worry about retirement and put everything in the business. It’s not a problem for me because I don’t see myself retiring.’

She says: ‘I am not paying into a pension any more, everything goes into my business. I don’t look at the retirement age any more, I really enjoy what I’m doing. My business is my pension in a way.’

She is now expecting turnover to double, and adds: ‘Covid has presented a much more level playing field for small businesses online.’