The winner of RuPaul’s Drag Race UK has spoken candidly about how he was so naive about his personal finances when he first left home he didn’t realise he needed to pay council tax or utility bills.

James Lee Williams, 28, the drag artist from Liverpool best known as The Vivienne, won the first series of the competition, which aired in 2019.

But before winning the show and becoming an international drag sensation, James was a young twenty-something who was struggling after years of racking up debt.

Speaking to Femail, James explained he first left Wales aged 16 but hadn’t appreciated the responsibilities that came with living alone.

‘I was just completely unaware of the fact I had to pay my council tax and pay my phone bill and pay anything that I needed to pay regularly like electricity and gas, things like that,’ he said.

‘I didn’t know you could go to prison if you don’y pay council tax or that people would knock on your door wanting some money.’

It got to the point where James had the bailiff knocking at his door. 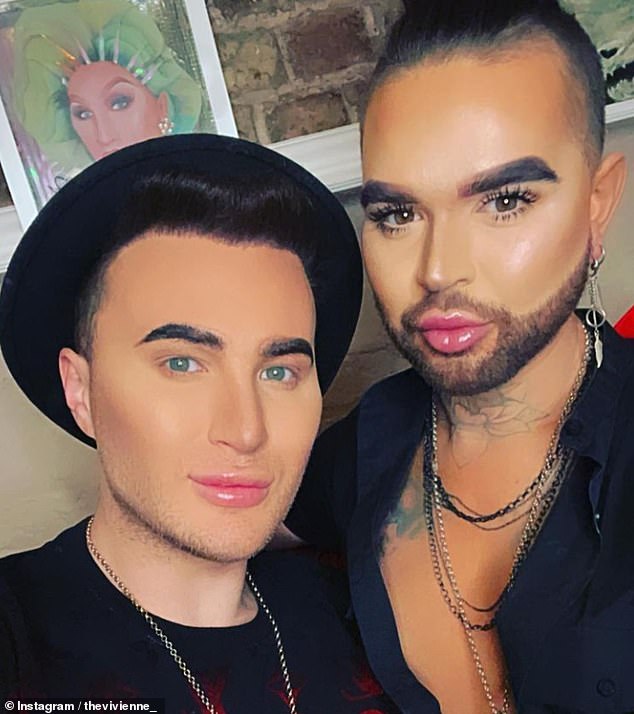 James Lee Williams, 28, left, the drag artist from Liverpool best known as The Vivienne, won the first series of the competition, which aired in 2019. But before winning the show and becoming an international drag sensation, James was a young twenty-something who was struggling after years of racking up debt. Pictured, with his husband David 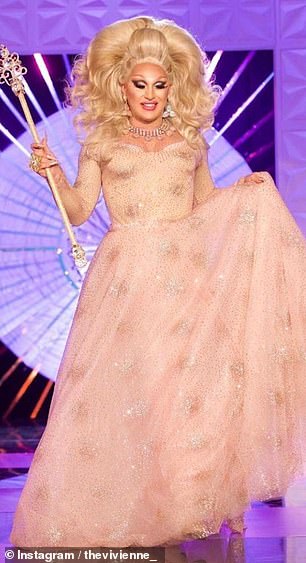 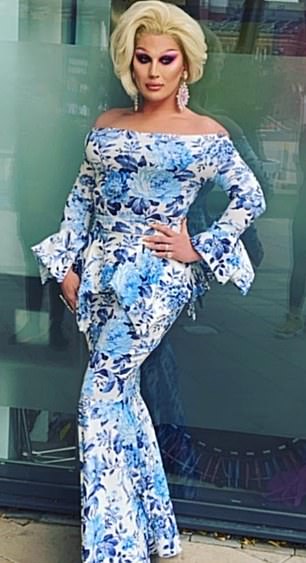 James, who is widely known as The Vivienne, said he had no idea he had to pay his bills when he first moved from Wales to Liverpool aged 16. Pictured after winning the final of Rupaul’s Drag Race UK in 2019, left, and striking a pose in a stunning blue ensemble

James, who now lives in a house he rents and hopes to buy with his husband David, is now using his experience to help others as the face of the new ‘Money Positive’ campaign from consumer credit reporting company Experian.

The campaign encourages more healthy, open discussions about money and give people the tools and support to pursue their financial goals.

James’ money troubles started when he first moved to Liverpool aged 16 and was confronted with renting and paying utilities by himself.

‘I was such a mess a few years ago when I first moved from Wales to Liverpool,’ he said.

‘I left school with no knowledge of what’s going on in my future or how I had to deal with things like how I had to pay bills. 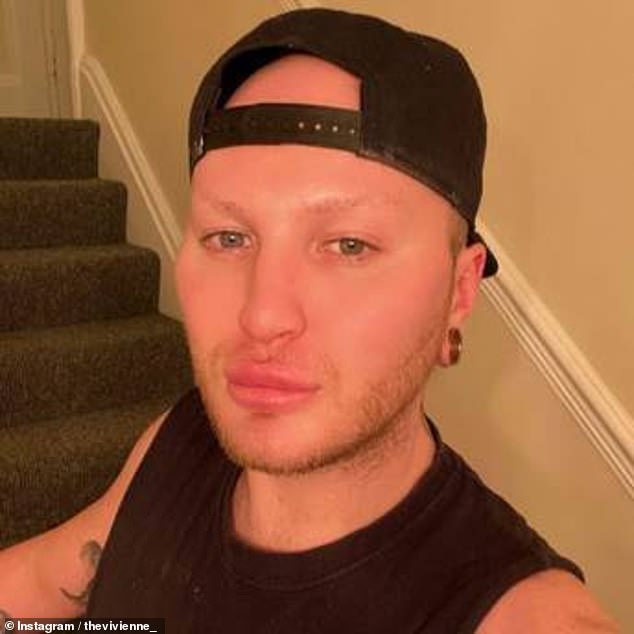 James out of drag. The artist said he wanted to encourage people to be more money positive and to have honest conversation about money 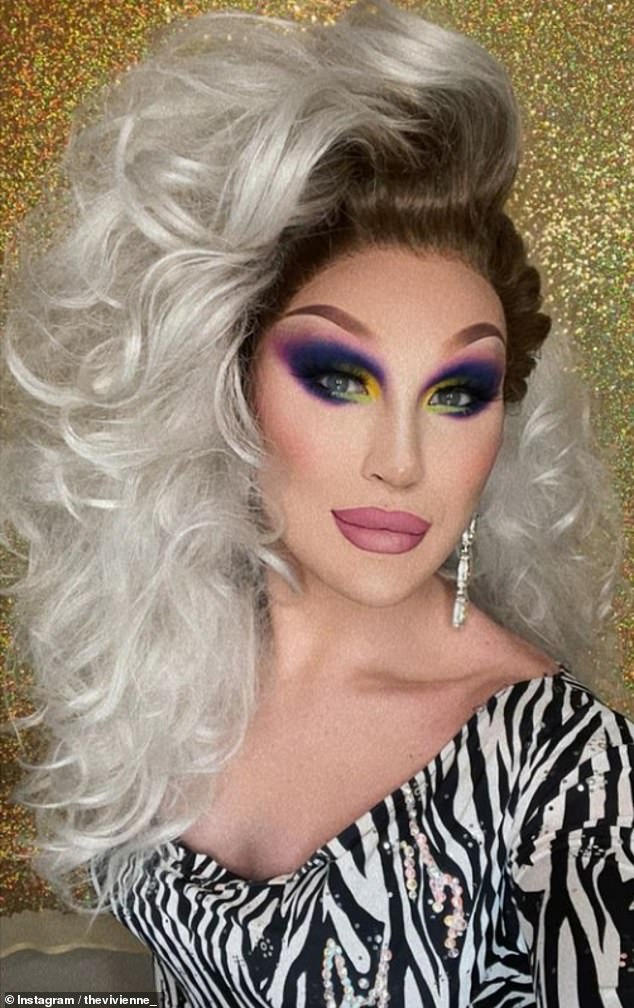 Pictured in drag. James is now in the process of bettering his credit score and wants to eventually buy his house

‘When I saw what they were asking per calendar month “Oh I can afford £400, but then you kind of don’t realise there’s council tax and electricity, water… Everything else that goes on top, like WiFi or a phone.’

Unable to pay his bills, James ignored the problem rather than deal with it.

‘I kind of buried my head under the sand, brushed it off to the side, and just didn’t realise it would have such a negative effect on things in the future when it came to things like phone contracts and mortgages and things like that,’ he said.

What is the Money Positive campaign?

The Vivienne is working with Experian on their ‘Money Positive’ campaign, which encourages people to have healthier, open discussions about money and give them tools to support their financial goals.

Basing it on her own experience with money struggle, The Vivienne is encouraging people to apply the same approach to their bank account and credit score as they would their own bodies and take control of their financial health.

To get started you can check your credit score for free on Experian and try and boost your score with Experian Boost.

After landing himself in debt, James was in the fortunate position where he could ask his family for help.

He said: ‘I had to phone my dad, ask for help. Luckily I was in a position where I got a great family around me. I got help from my father and then I had to pay him back.’

The drag artist urged others who might find themselves in a similar position to seek help.

‘It’s just not a nice place to be in when you’re scared in your own home, you shouldn’t have to be worried about that,’ he said.

‘Even if you’ve put yourself under a lot of debt, there are ways to get out of that, to make sure you’re not thinking about it constantly.’

However James is still haunted by the effects of his actions today and is still trying to build up his credit score years later.

He said: ‘I’m in a position now that I’ve been renting this house that I’ve now been in for about just under three years, I love the house, I really want to buy it and I really need to make sure I’m in a good finance situation now to do that.’

Being a drag artist, James’ earnings have suffered due to the coronavirus pandemic, forcing him to cut back on his spending.

‘I was making such good money after Drag Race but then all of a sudden, we’re not allowed to go on tour, which is my main source of income,’ he continued.

‘You have to really cut back on things, like you can’t buy a new Louis Vuitton bag every three months if you want.

‘It’s boiled down to  here’s bill, here’s rent, here’s everything else and trying to save as much for the future as we can, because my main goal is to buy the house.’