A home cook has set mouths watering with her caramel-stuffed brownies, which can be made with simple supermarket ingredients in less than 10 minutes.

The woman followed a recipe from Eloise Head, an Instagram-famous baker from London who is the creator of viral dessert account ‘FitWaffle Kitchen’.

Fans have hailed the brownies ‘divine’ and the ‘best’ they’ve seen on social media since photos were uploaded to the Facebook group ‘Baking It Simple’ on Saturday.

The group, which has 6,100 members from around the world, is dedicated to quick and easy recipes that are simple enough for bakers of all skill levels to attempt. 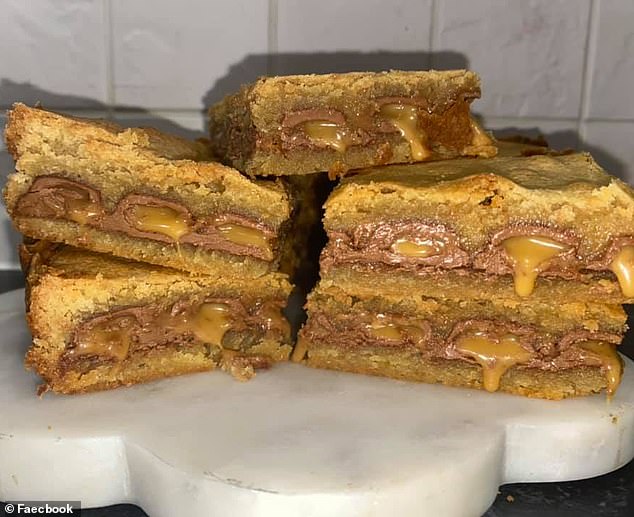 The butter should be melted and then whisked with both sugars before the egg and vanilla extract are added in.

Next, flour should be folded in with a wooden spoon, mixing gently until just combined.

Over-mixing will leave the brownies with a tough and unpleasantly chewy texture.

Recipe for ‘best ever’ brownies

Half a teaspoon of baking powder

1. Melt butter and whisk with both sugars, then add egg and vanilla extract,

3. Scoop half the mixture into a baking tray lined with parchment paper, laying two whole bars of chocolate on top.

4. Cover with the remaining mixture then bake at 180 degrees Celsius for 30 minutes.

Half the mixture should then be scooped into a baking tray lined with parchment paper, with the two bars of chocolate placed side by side on top.

The chocolate should be covered with the remainder of the mixture and baked at 180 degrees Celsius for 30 minutes.

This quantity of ingredients should make between 16 and 18 brownies, according to the recipe.

Glowing reviews quickly flooded the comment section of the photos, with responses including ‘wow, I need to make those immediately’.