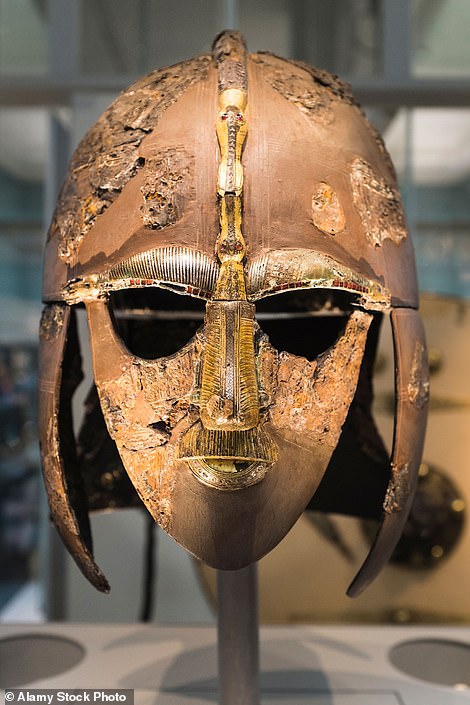 The next time you explore our glorious countryside, keep an eye out for what may look like a discarded sweet wrapper. That’s exactly what Kevin Duckett thought he’d found in Northamptonshire in 2017. Instead, it turned out to be a solid gold figurine depicting King Henry VI, thought to have once been the centrepiece of a crown worn by Tudor Kings and Queens, including Henry VIII.

Missing since the 1640s, it is two-and-a-half inches tall, adorned with enamel and is valued at about £2 million. If you want to see a replica of the jewel-studded Tudor Crown Imperial, it is displayed in the Royal Chapel at Hampton Court Palace. To make a weekend of it, book in to Great Fosters, a 400-year-old country house in Egham, Surrey, where B&B costs £255 a night (alexanderhotels.co.uk).

Only last week, it was reported that detectorist Kath Giles had discovered an extremely rare collection, buried 1,000 years ago on farmland on the Isle of Man. The gold arm-ring, silver armband and the biggest silver brooch of its kind will be displayed in the Viking and Medieval Gallery at the Manx Museum.

And who hasn’t been inspired by Netflix hit The Dig, which dramatises the discoveries at Sutton Hoo in Suffolk in the 1930s? Ralph Fiennes plays archaeologist Basil Brown and Carey Mulligan is Edith Pretty, the then owner of land dubbed England’s Valley of the Kings.

Excavations yielded a wealth of Anglo-Saxon treasures, including the iconic helmet from 1,400 years ago. See the items for yourself in Room 41 of the British Museum as part of Europe’s story in the eight centuries up to 1100. The National Trust runs Sutton Hoo and the Royal Burial Ground, an informative exhibition hall, plus Edith Pretty’s former home, Tranmer House. 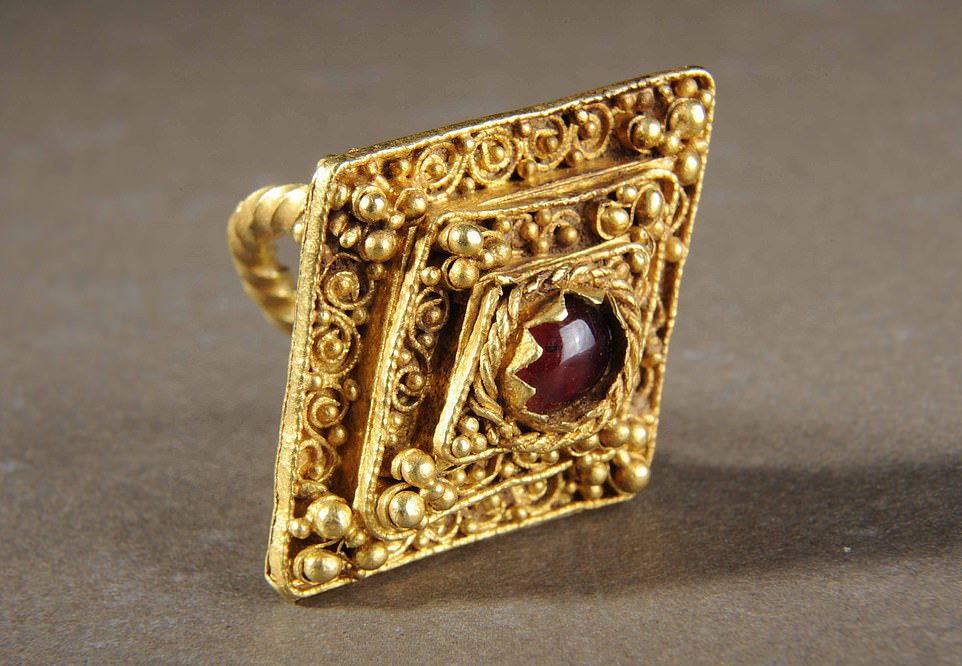 Decorative: A gold ring from the West Yorkshire Hoard, which is now on display at Leeds City Museum

Afterwards, head to nearby Orford and enjoy coastal views or those of Orford Castle from the Crown and Castle (B&B £160 a night, crownandcastle.co.uk). Expect modern country rooms and award-winning fare in the bistro.

Yorkshire is a rich seam for treasure. Found near Leeds in 2008 and 2009, the West Yorkshire Hoard includes gold rings decorated with filigree spirals. Likely to have had high-status owners, the Anglo-Saxon jewellery is now on display at Leeds City Museum.

The nearby Grade II listed Quebecs Hotel, built in 1891, is an elegant place to stay. Here you can take afternoon tea in The Gallery and admire impressive stained-glass windows and dine on local produce in the conservatory (B&B £99 a night, quebecshotel.co.uk). 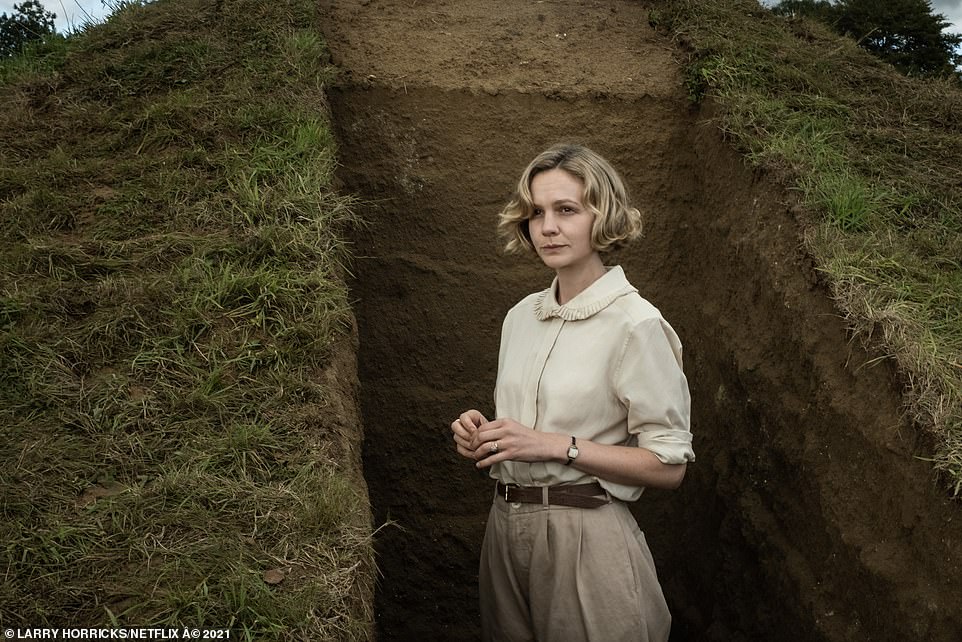 Pictured above is Carey Mulligan in The Dig, which dramatises the discoveries at Sutton Hoo in Suffolk in the 1930s

The Viking-era Vale of York Hoard, found by detectorists between Harrogate and York in 2007, includes more than 600 silver coins, a gold arm-ring and a gilded cup, and it is held at the British Museum. The items from Scandinavia, Ireland, France and Uzbekistan reflect the wide-reaching trading connections of York in the 920s.

For a decadent weekend away, check in to York’s vine-clad Gray’s Court Hotel, which is stuffed with antiques (B&B £244 a night, grayscourtyork.com).

The Huxley Hoard was discovered during a weekend event organised by Lune Valley Metal Detector Club in 2004. Twenty-one silver bracelets or arm-rings, most stamped with decorative patterns, were found next to an ingot. Other fragments suggest they were buried in a lead-lined box. These are on display at the Museum of Liverpool. Check in at 2 Blackburne Terrace for a stay in a lovingly restored Georgian townhouse (B&B £150 a night, 2blackburneterrace.com).

In 2015, James Mather detected 15 silver ingots, jewellery and nearly 200 coins in Oxfordshire. Some of the coins from the 870s depict Alfred the Great of Wessex seated with King Ceolwulf II of Mercia. Viking raids around that time may have prompted their owner to hide the treasures. Visitors to the Ashmolean Museum in Oxford can view them there, plus the Crondall Hoard, which includes early Anglo-Saxon coins – some of the first minted in Britain after the Roman era. The hoard was found in 1828 when a sharp-eyed 18-year-old spotted metal objects among some freshly turf cut in Hampshire.

Stay close by at Oxford’s Old Bank Hotel, which has swish rooms in converted Georgian premises (B&B £280 a night, oldbankhotel.co.uk).

Edward the Elder, Alfred the Great’s son, is depicted on 90 silver coins found in Suffolk in 2003 by members of a metal detecting club. The Brantham Hoard forms part of the Fitzwilliam Museum’s collection. The Cambridge institution also displays the Chesterton Hoard, a staggering collection of 1,800 silver pennies and nine gold coins found during excavation to extend the city’s sewer network. Stay nearby at a swish B&B that was the Duke of Gloucester’s home in the 1960s (B&B £140 a night, dukehousecambridge.co.uk). 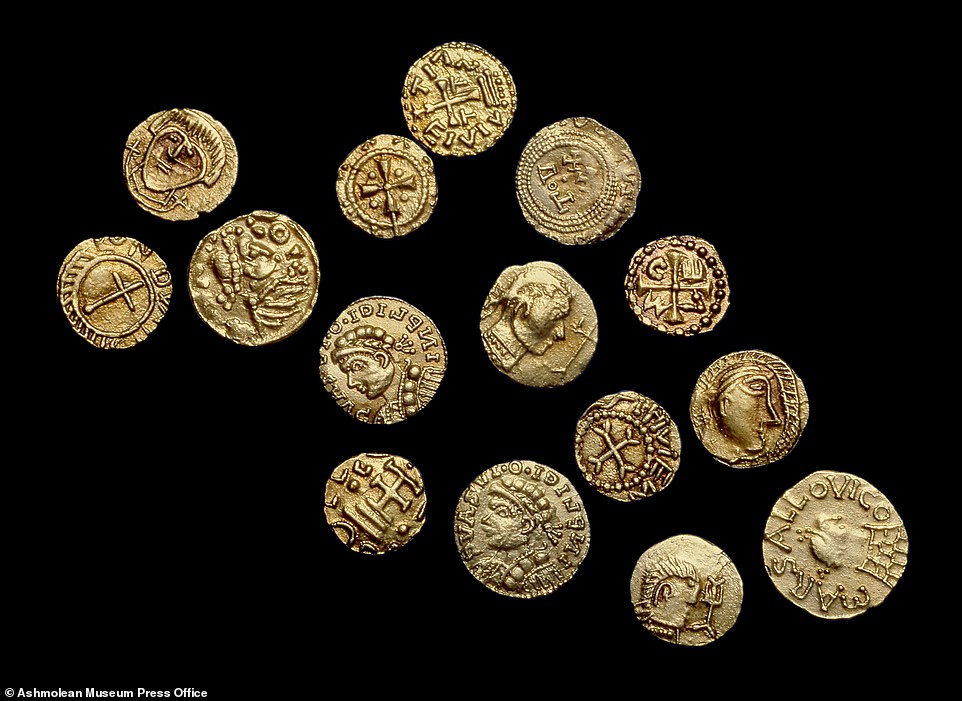 Visitors to the Ashmolean Museum in Oxford can view the Crondall Hoard, which includes Anglo-Saxon coins

In 2019, detectorists in Somerset discovered the largest cache of coins ever found from immediately after the Norman Conquest. In addition to 1,310 coins featuring William the Conqueror, the Chew Valley Hoard boasts 1,236 silver pennies depicting the last Anglo-Saxon King, Harold II. Explore the region while staying at the Gainsborough Bath Spa hotel – its lobby displays part of the vast Beau Street Hoard of Roman coins (B&B £248 a night, thegainsboroughbathspa.co.uk).

A Norfolk gravedigger unearthed six disc-shaped objects in 1978. Yet it was only in 1980 that the Pentney Hoard was sent to the British Museum and identified as notable examples of Anglo-Saxon metalwork, including two non-identical pairs of brooches. Enjoy an overnight stay in the area at The Dabbling Duck, a traditional locals-owned pub in Massingham (B&B £120 a night, thedabblingduck.co.uk).

Weighing almost 9 lb, the largest hoard of Anglo-Saxon gold found to date was discovered along with garnets and nearly 4 lb of silver items near Lichfield in 2009. Most of the Staffordshire Hoard’s 4,600 items were crafted between 570 and 650 and are notable for their quality. The hoard is displayed at Birmingham Museum and Art Gallery (closed for 2021) and the Potteries Museum and Art Gallery in Stoke-on-Trent. For a relaxing countryside break, check in to The Old Hall, a 16th Century building with beautiful gardens at Madeley (B&B £120 a night, theoldhallatmadeley.com).