Iran has fired more than a dozen ballistic missiles at two Iraqi bases housing American troops in a revenge attack for the U.S. drone strike that killed a top Iranian general.

The Ain al-Asad airbase in western Iraq that was visited by Donald Trump in December 2018 and the Erbil base in Iraqi Kurdistan were both struck by the missiles on Tuesday at about 5.30pm (EST).

The Pentagon says the missiles were ‘clearly launched from Iran’ to target U.S. military and coalition forces in Iraq. There was no immediate word on injuries but security sources told CNN that there were Iraqi casualties at the al-Asad airbase.

President Donald Trump has been briefed on the attacks and Defense Secretary Mark Esper and Secretary of State Mike Pompeo were spotted arriving at the White House soon after news of the strikes broke.

Iran’s Revolutionary Guards, which controls the country’s missile program, confirmed that they fired the rockets in retaliation for last week’s killing of Iranian general Qassem Soleimani, according to state TV.

They reported the operation’s name was ‘Martyr Soleimani’ and it took place just hours after the slain general’s funeral.

The rockets used in the attack, according to Iranian TV, were Fatteh-110 ballistic missiles, which have a range of 186 miles or 300km.

The Iranian air force has since deployed multiple fighter jets to patrol it airspace, according to reports – as Iran warned the U.S. and its allies in the region not to retaliate. 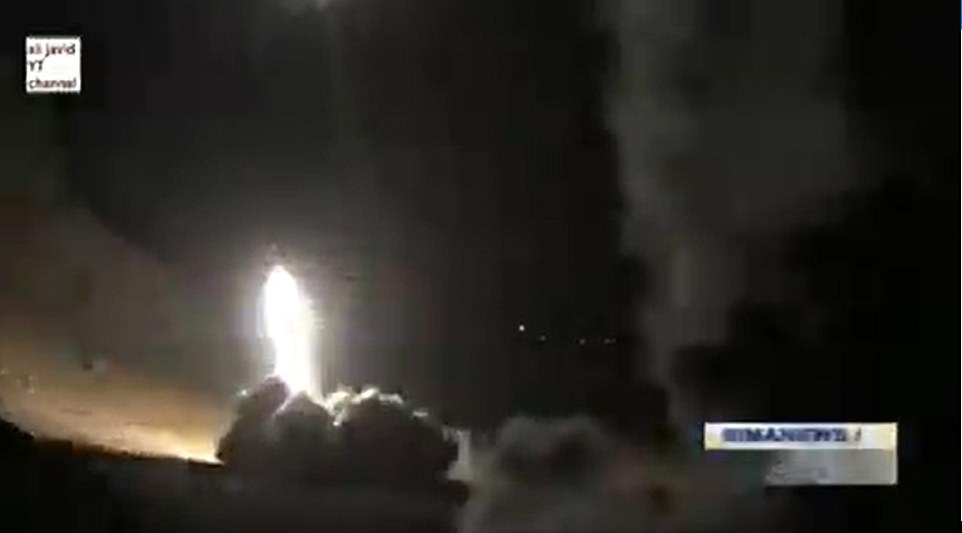 Iran has fired more than a dozen ballistic missiles at two Iraqi bases housing American troops in a revenge attack for the U.S. drone strike that killed a top Iranian general 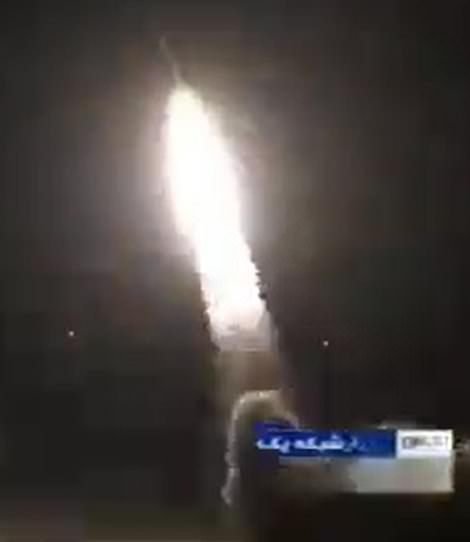 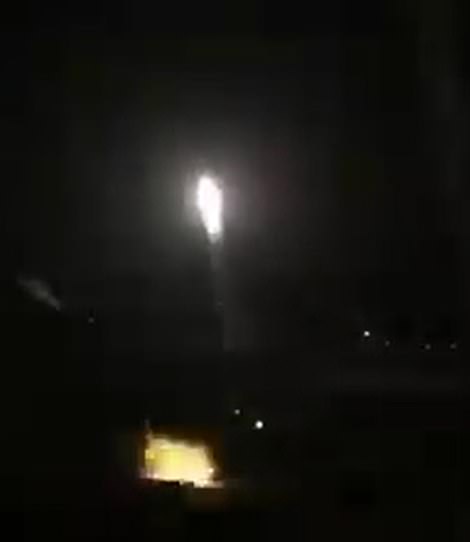 The Ain al-Asad airbase in western Iraq that was visited by Donald Trump in December 2018 and the Erbil base in Iraqi Kurdistan were both struck by the missiles on Tuesday at about 5.30pm (EST) 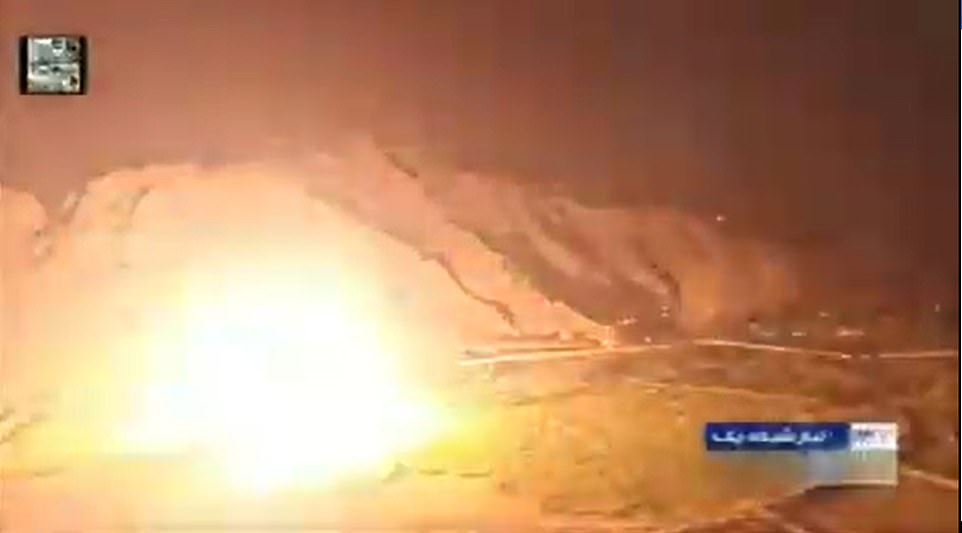 The Pentagon says the missiles were ‘clearly launched from Iran’ to target U.S. military and coalition forces in Iraq

The Pentagon said it was still working to assess the damage.

‘In recent days and in response to Iranian threats and actions, the Department of Defense has taken all appropriate measures to safeguard our personnel and partners. These bases have been on high alert due to indications that the Iranian regime planned to attack our forces,’ a statement from the Pentagon read.

‘It is clear that these missiles were launched from Iran and targeted at least two Iraqi military bases hosting U.S. military and coalition personnel at al-Assad and Irbil. We are working on initial battle damage assessments.

‘As we evaluate the situation and our response, we will take all necessary measures to protect and defend U.S. personnel, partners, and allies in the region.’

President Trump has been briefed on the rocket attacks but was not expected to make an address Tuesday night, according to a senior White House official.

‘We are aware of the reports of attacks on US facilities in Iraq. The President has been briefed and is monitoring the situation closely and consulting with his national security team,’ White House press secretary Stephanie Grisham said immediately after the attacks.

House Speaker Nancy Pelosi was handed a note about the attack as she discussed the situation in Iran in a meeting with lawmakers.

They also warned U.S. allies in the Middle East that they would face retaliation if America strikes back against any Iranian targets from their bases.

‘We are warning all American allies, who gave their bases to its terrorist army, that any territory that is the starting point of aggressive acts against Iran will be targeted,’ they said. It also threatened Israel. 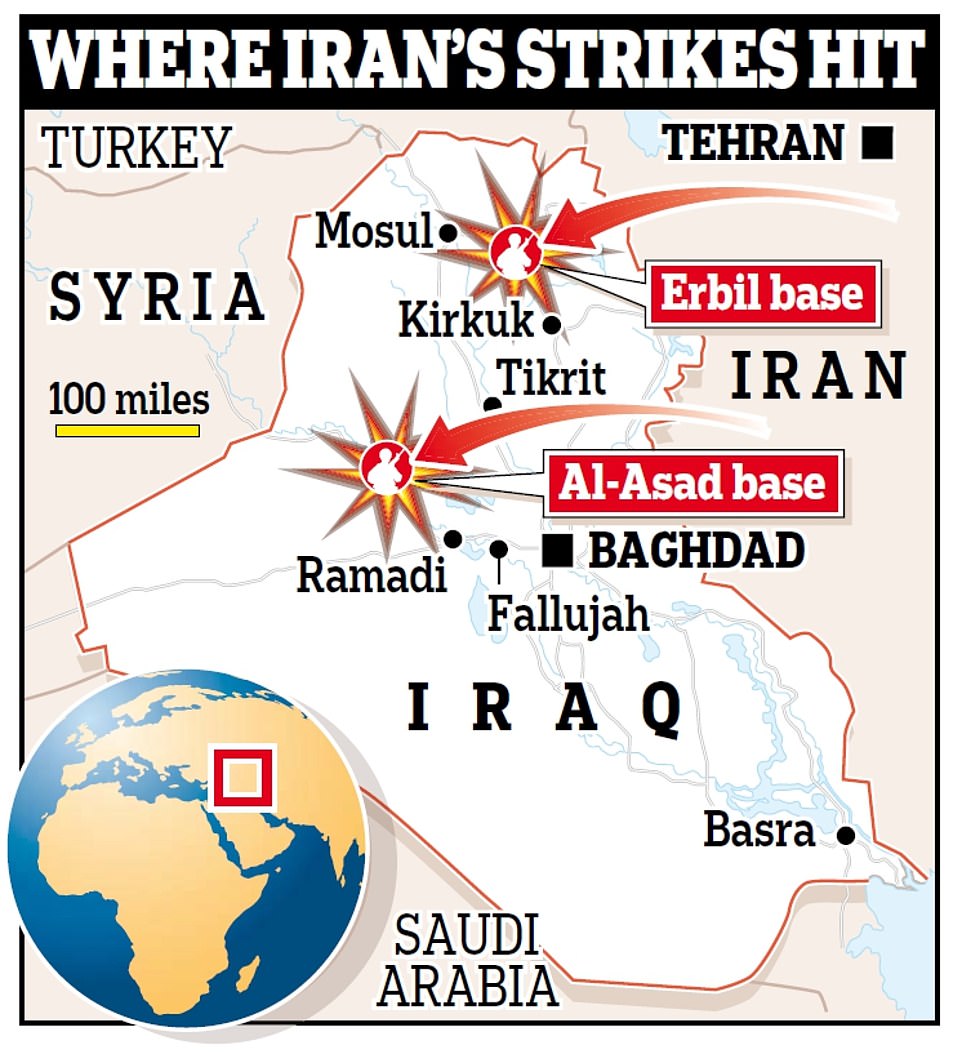 The Ain al-Asad airbase in western Iraq and the Erbil base in Iraqi Kurdistan were both struck by the missiles on Tuesday at about 5.30pm (EST) 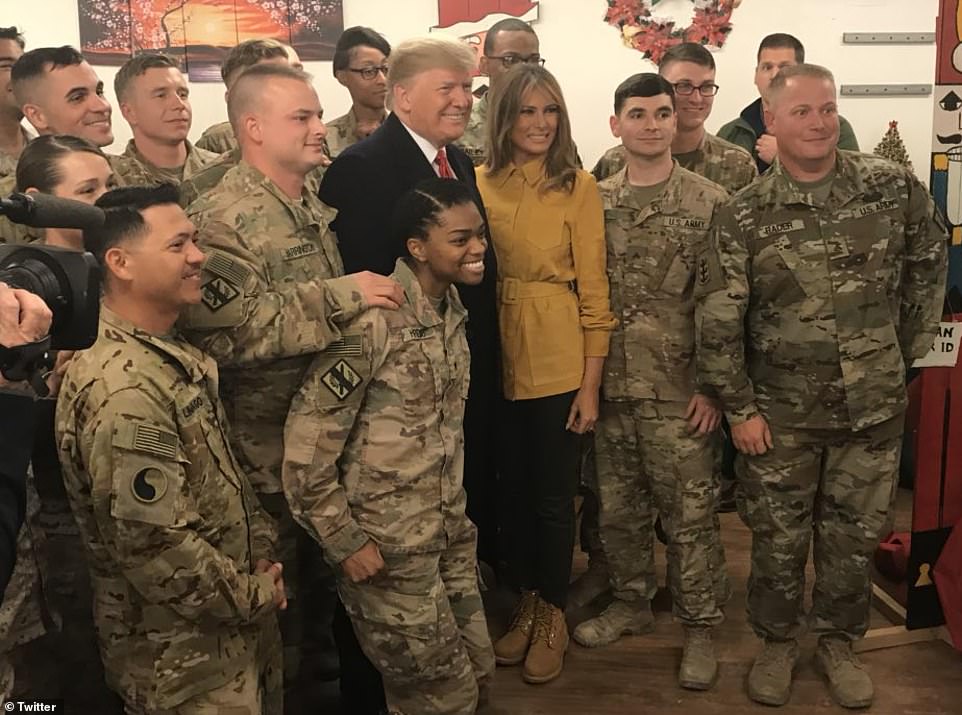 President Trump and First Lady Melania visited the al-Asad airbase in western Iraq in December 2018. The airbase was targeted by Iran on Tuesday in a missile attack 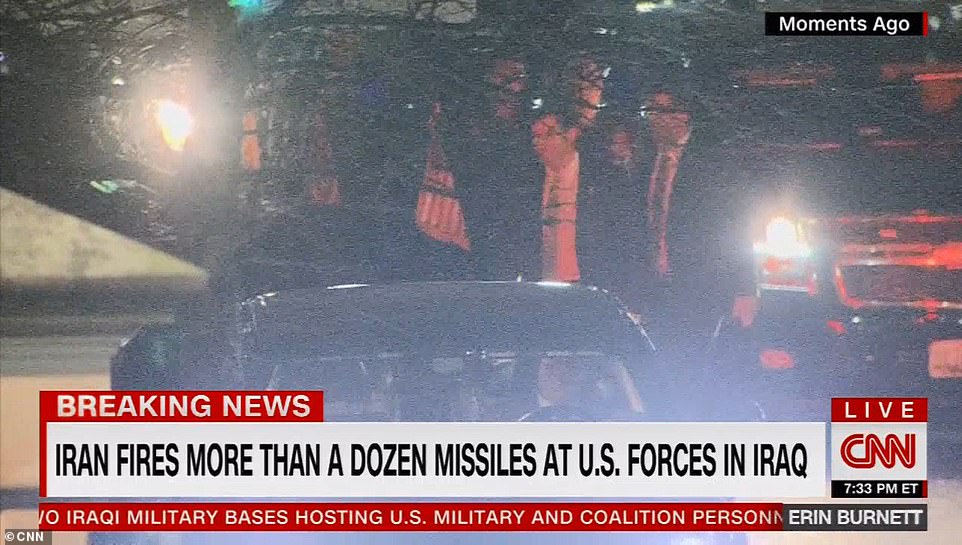 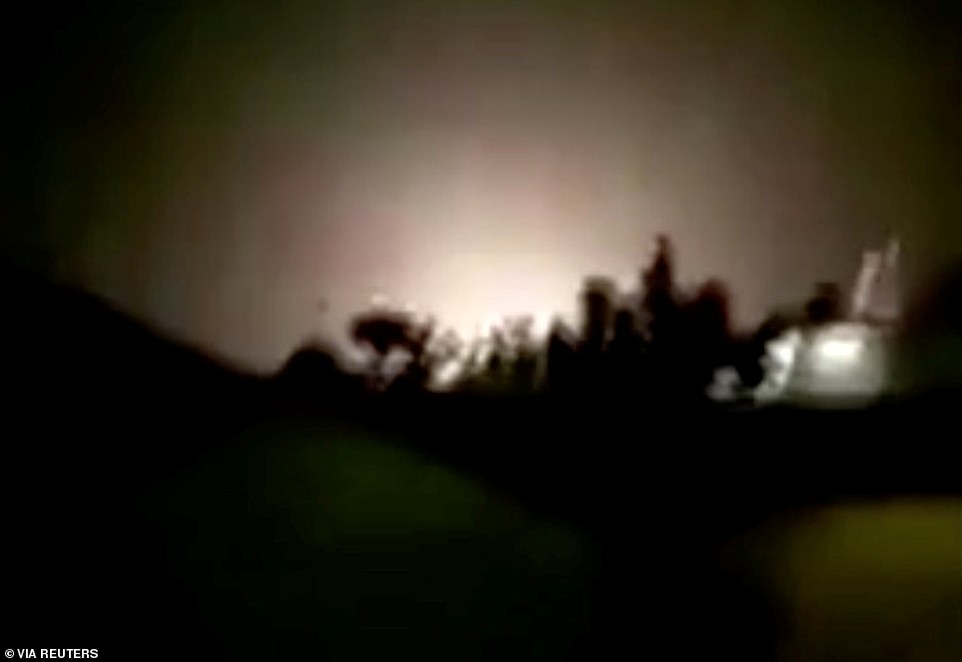 Two types of ballistic missiles were reportedly used to hit U.S. Military bases in Ain al-Asad in western Iraq and also around Erbil in Iraqi Kurdistan.

The majority of those used are believed to be the Fateh-110, which can travel 180 miles or 300km and have a payload of around 500lb.

The Fateh-110 is an Iranian-designed, short-range, surface-to-surface ballistic missile that can be launched from any location.

While the Qiam-1 was specifically built to target U.S. bases in the Middle East, which have ‘encircled Iran’, according to Iranian sources.

When it was launched the Fateh-110 was described by Iranian defence minister Brigadier General Amir Hatami as ‘100-percent domestically made – agile, stealth, tactical (and) precision-guided’.

Both missiles are reported to have been fired from Tabriz and Kermanshah provinces in Iran.

After the strikes, Saeed Jalili – a former Iranian nuclear negotiator and foreign minister – posted a picture of the Islamic Republic’s flag on Twitter, appearing to mimic Trump who posted an American flag following the killing of Soleimani and others in the drone strike in Baghdad.

Ain al-Asad air base was first used by American forces after the 2003 U.S.-led invasion that toppled dictator Saddam Hussein, and later saw American troops stationed there amid the fight against the Islamic State group in Iraq and Syria. It houses about 1,500 U.S. and coalition forces.

About 70 Norwegian troops also were on the air base but no injuries were reported, Brynjar Stordal, a spokesperson for the Norwegian Armed Forces said.

The U.S. Federal Aviation Administration said on Tuesday it would ban U.S. carriers from operating in the airspace over Iraq, Iran, the Gulf of Oman and the waters between Iran and Saudi Arabia after the missile attack on U.S.-led forces.

Earlier on Tuesday, Defense Secretary Mark Esper said the United States should anticipate retaliation from Iran over the killing in Iraq of Soleimani.

‘I think we should expect that they will retaliate in some way, shape or form,’ Esper told a news briefing at the Pentagon, adding that such retaliation could be through Iran-backed proxy groups outside of Iran or ‘by their own hand.’

‘We’re prepared for any contingency. And then we will respond appropriately to whatever they do.’

Trump had also earlier told reporters about the prospect of an Iranian attack: ‘We’re totally prepared.’

‘They’re going to be suffering the consequences and very strongly,’ he said from the Oval Office during a meeting with Greek Prime Minister Kyriakos Mitsotakis.

Meanwhile, early reports of an attack at the al-Taji military base, just outside Baghdad, was later reported as a drill.

Local reports initially suggested that five rockets had struck the base after ‘shelter in place’ sirens were heard ringing out around the compound.

Sirens were also heard blaring out inside the U.S. consulate in Erbil, which was one of the bases struck in the missile attack. 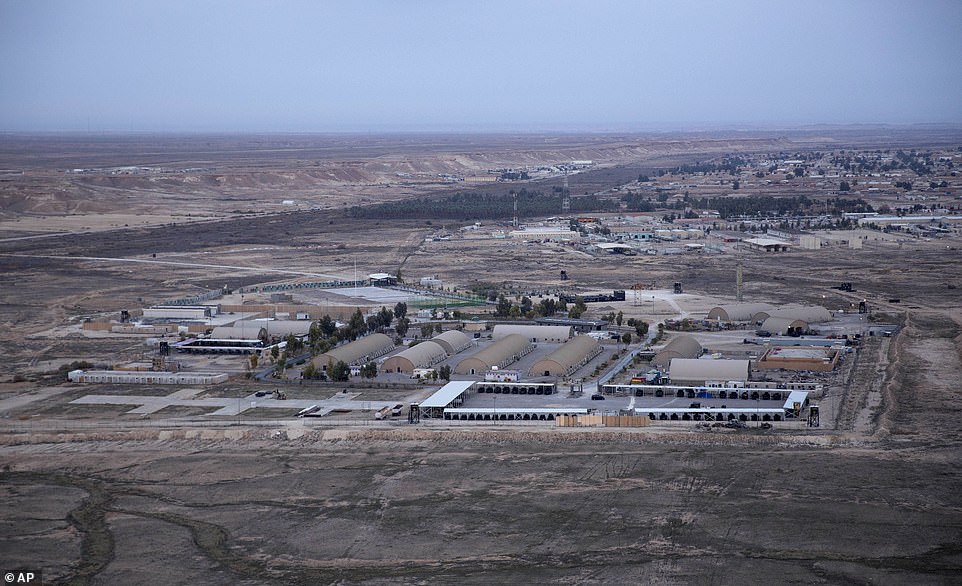 The al-Asad base for American and coalition troops (pictured above in December) was struck by missiles ‘clearly launched from Iran’, U.S. officials say 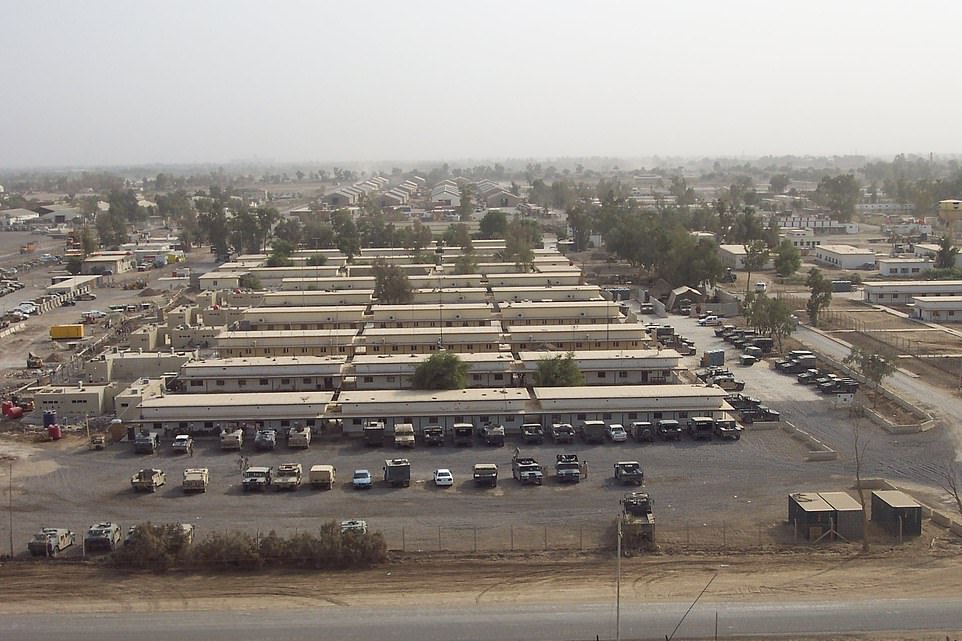 The Erbil base in Iraqi Kurdistan, which provides facilities and services to at least hundreds of coalition personnel and CIA operatives, was also hit in the missile attack 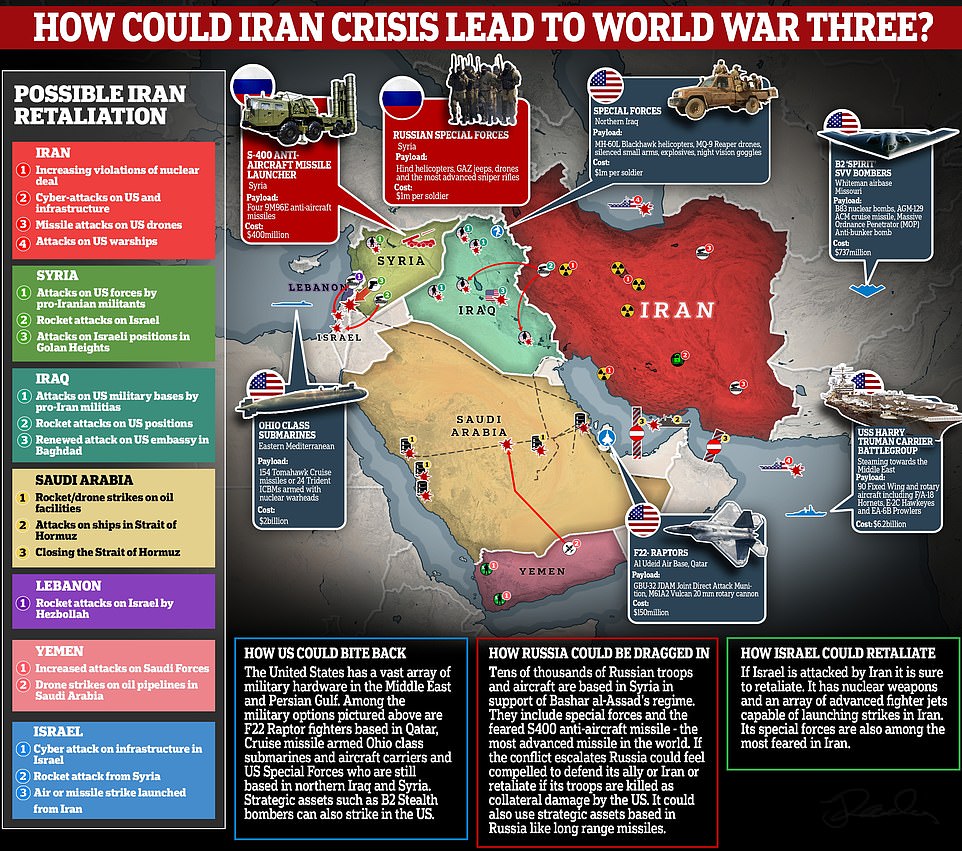 The strikes by Iran were a major escalation of tensions that have been rising steadily across the Mideast following months of threats and attacks after Trump’s decision to unilaterally withdraw America from Tehran’s nuclear deal with world powers.

Soleimani’s killing and Iran’s missile strikes also marked the first time in recent years that Washington and Tehran have attacked each other directly rather than through proxies in the region. 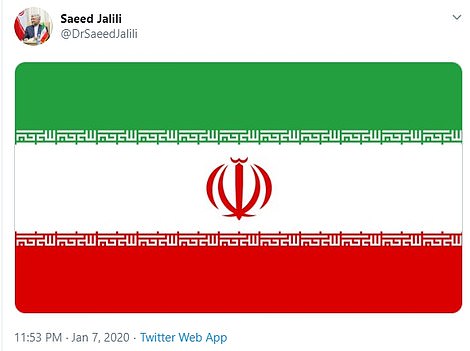 After the strikes, Saeed Jalili – a former Iranian nuclear negotiator – posted a picture of the Islamic Republic’s flag on Twitter, appearing to mimic Trump who posted an American flag following the killing of Soleimani and others in the drone strike in Baghdad 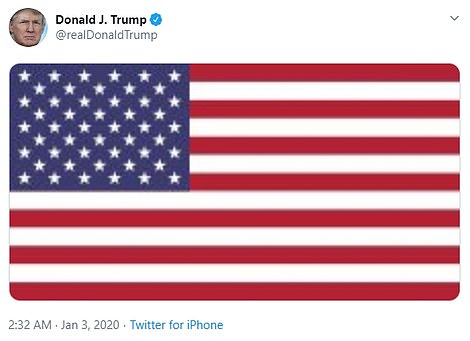 It raised the chances of open conflict erupting between the two nations, which have been foes since the days immediately following Iran’s 1979 Islamic Revolution.

The revenge attack came a mere few hours after crowds in Iran mourned Soleimani and as the U.S. continued to reinforce its own positions in the region and warned of an unspecified threat to shipping from Iran in the region’s waterways, crucial routes for global energy supplies.

U.S. embassies and consulates from Asia to Africa and Europe issued security alerts for Americans. The U.S. Air Force launched a drill with 52 fighter jets in Utah on Monday, just days after Trump threatened to hit 52 sites in Iran.

Meanwhile a stampede broke out Tuesday at Soleimani’s funeral in his hometown of Kerman and at least 56 people were killed and more than 200 were injured as thousands thronged the procession, Iranian news reports said.

There was no information about what set off the crush in the packed streets. Online videos showed only its aftermath: people lying apparently lifeless, their faces covered by clothing, emergency crews performing CPR on the fallen and onlookers wailing and crying out to God.

A procession in Tehran on Monday drew over one million people in the Iranian capital, crowding both main avenues and side streets.

Hossein Salami, Soleimani’s successor as leader of the Revolutionary Guard, addressed a crowd of supporters gathered at the coffin in a central square in Kernan.

He vowed to avenge Soleimani, saying: “We tell our enemies that we will retaliate but if they take another action we will set ablaze the places that they like and are passionate about’.