‘As a candidate for president, Joe Biden promised that he would put an official in charge of the COVID response in the White House. He will do that,’ Klain said on MSNBC’s ‘The Last Word with Lawrence O’Donnell.’

Klain also revealed that Biden has spoken to Republicans, in both Congress and the governors’ mansions, despite President Donald Trump‘s refusal to concede and many in his party remaining tight-lipped about the election result. 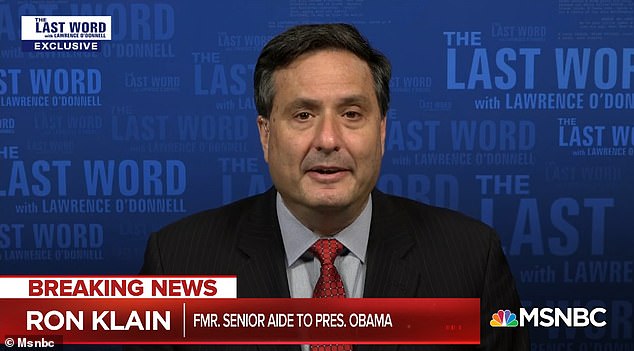 Incoming White House Chief of Staff Ron Klain said Thursday night that President-elect Joe Biden would appoint a COVID point person as soon as he’s sworn in. Klain also said that Biden has been talking to Republican governors and GOP members of Congress

Senate Majority Leader Mitch McConnell has given Trump public cover to persue election-related lawsuits, none of which have been able to prove what the president has alleged – that he’s been the victim of widespread voter fraud.

Most Republican senators haven’t congratulated Biden on winning the election.

Sen. Chris Coons, a Delaware Democrat like Biden, said on CNN Tuesday that Republicans were back-channeling their congratulations to the president-elect through him.

Klain said Biden is both reaching out to GOP officials and they’re calling him.

‘I think there’s been some of each, Lawrence,’ he said. ‘The president-elect served in the Senate for more than 30 years. He has a lot of relationships up there.’

Klain said he believed Biden won because he’d be able to work across the aisle.

‘They will have a working relationship when the time comes,’ the incoming chief of staff added.

But he pointed to the government’s response to the coronavirus pandemic, as something that could be further bungled if there’s a rocky transition.

‘As you said at the outset of the program, we’re in a COVID crisis,’ Klain said. ‘Right now, right now, there are officials inside the Department of Health and Human Services who are busy planning a vaccination campaign for the months of February and March, when Joe Biden will be president.’

‘And so the sooner we get our transition experts into meetings with the folks who are planning the vaccination cmapaign, the more seamless the transition … can be,’ Klain added.