Students and parents have started to demand tuition fee refunds as universities abandon face-to-face teaching because of Covid outbreaks.

Thousands of freshers are currently locked down in their rooms as rising cases of the virus devastates the start of term.

The intake has already endured the summer grading fiasco and some are now stuck inside while being charged up to £9,250-a-year in tuition fees, plus rent.

Larissa Kennedy, president of the National Union of Students, told the Mail on Sunday: ‘In what is looking set to be an increasingly unclear and volatile year for universities, we must seriously look at reimbursements for students whose quality of learning has been significantly impacted.

‘It is also essential that housing providers allow students who may decide to either leave university or return to family homes to end their rental contracts and not be penalised for making decisions based on their own safety and those of local communities.’ 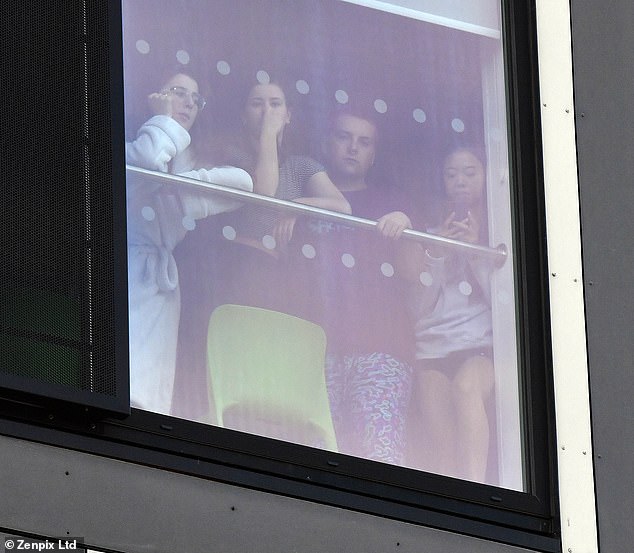 Students at university of Manchester are pictured at their window during lockdown. The intake has already endured the summer grading fiasco and some are now stuck inside while being charged up to £9,250-a-year in tuition fees, plus rent 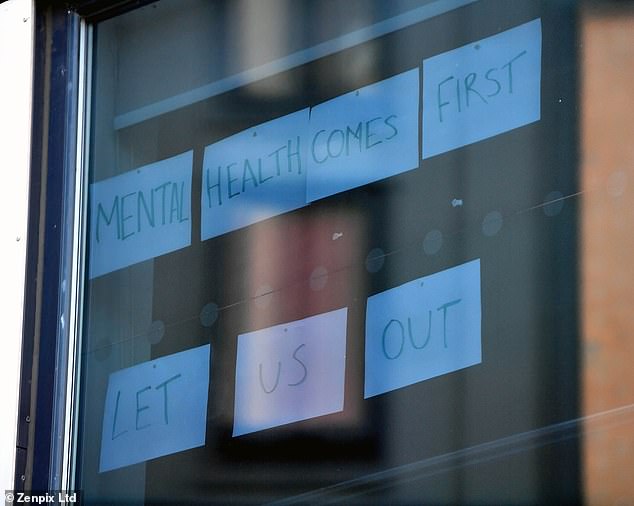 One flat displayed the message ‘mental health comes first. Let us out’ on their window 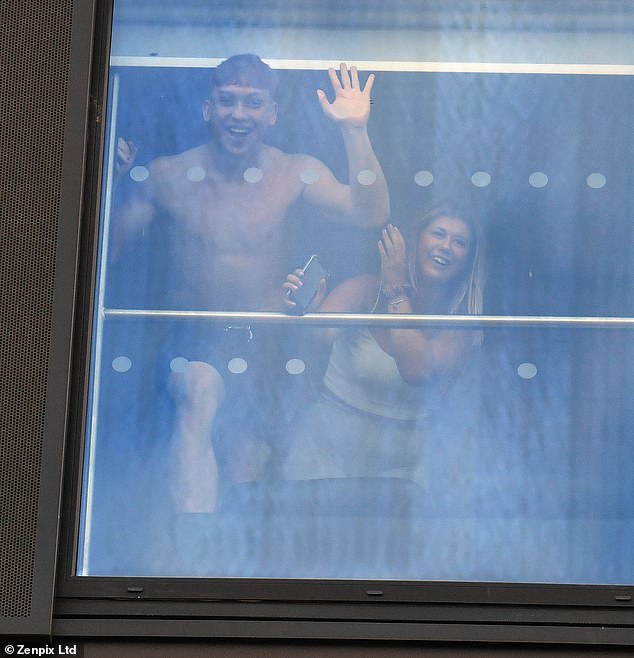 Some 1,700 Manchester Metropolitan University students are among those who have been instructed to self-isolate for 14 days following a spike in Covid-19 cases. Pictured: Students in Manchester

At least 32 universities in the UK now have confirmed coronavirus cases with about 3,000 students from Dundee to Exeter in isolation.

Some 1,700 Manchester Metropolitan University students have been confined to their rooms for two weeks, even if they have no symptoms. Police and security guards were outside Birley and Cambridge Halls on Friday while the university warned disciplinary action will be taken against any breaches.

Worried parents have travelled cross-country to drop off provisions for their teenage offspring who complained they had very little time to buy food supplies. 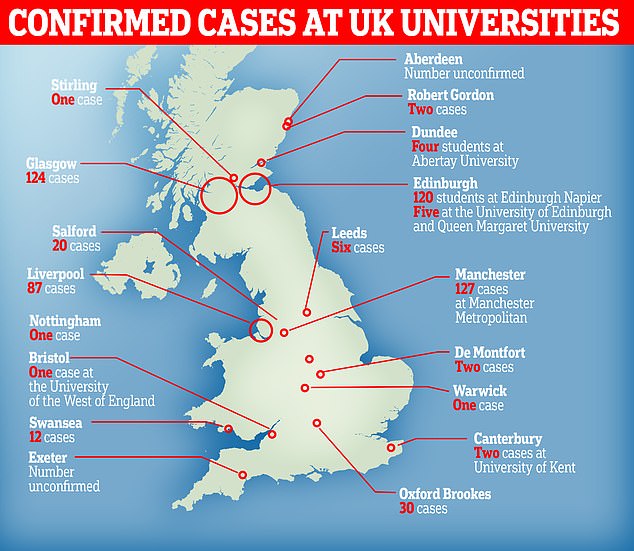 Manchester Met has now shifted teaching to online only for foundation and first- year students.

Reports of positive tests and students isolating at Leeds University come as more students arrive for the start of term. A walk-through testing centre has been set up in a sports centre on campus.

Jess Cook, a parent from Kent, whose son has just started at the institution, said: ‘What a waste of £9,000. It is miserable for them.

‘There should definitely be some kind of fee discount, but universities need support from the Government.

‘Universities were under huge pressure to take the kids in and have done what they were supposed to do to try to keep them safe.’

In Scotland, thousands of students are isolating after 172 cases were confirmed at the University of Glasgow and 120 at Edinburgh Napier University. 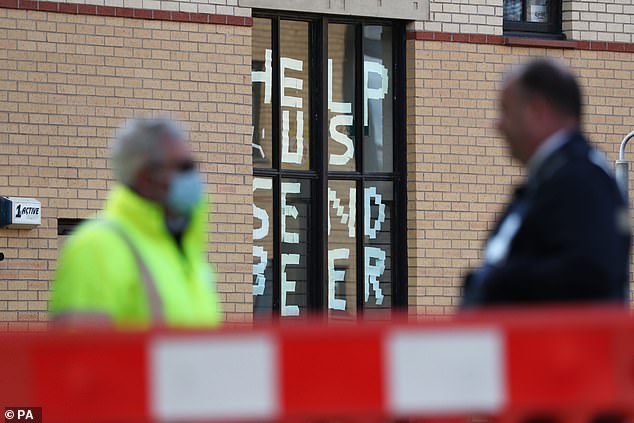 One student, 18, who has now been isolating for nearly a monthsays that catching coronavirus after returning to university was ‘inevitable’. The teenager is staying in an eight-person flat in Glasgow University’s Murano Street Student Village, which houses 1,175 students 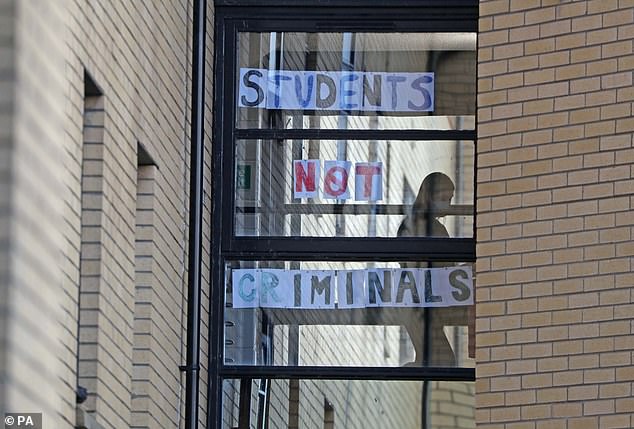 A student walks past a sign at Murano Street Student Village in Glasgow, where university students are being tested at a pop up test centre

Across the country, they have been told not to go to pubs, restaurants or parties and Universities Scotland has warned that students who socialise outside of their households risk losing their place.

At Edinburgh University, police were called to break up parties on Friday night at Pollock Halls, a main students’ residence housing about 1,900 undergraduates.

Glasgow University announced yesterday it would refund all students in halls of residence one month’s rent, along with a £50 payment for food. ‘We are offering everyone in our residences, regardless of whether they are isolating or not, a one-month rent refund to compensate for the disruption they are facing, and any financial hardship they may have encountered,’ the principal, Professor Sir Anton Muscatell said. 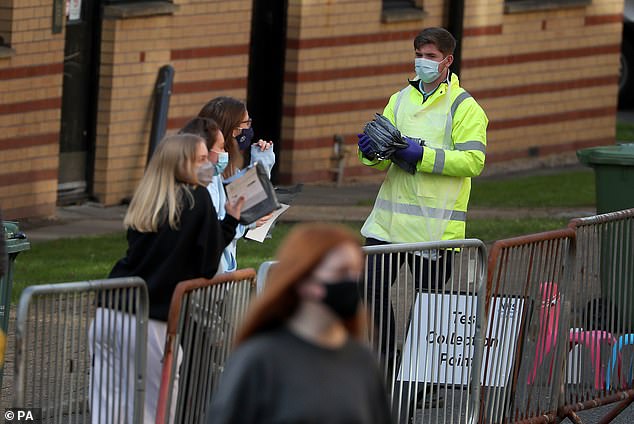 Calls are now growing for similar moves elsewhere. Robert Halfon, chairman of the Commons Education Committee, said: ‘Definitely they should be getting a discount on the cost of their tuition loan if they aren’t getting a significant amount of face-to-face teaching.’

He also warned that stopping students from returning home over the Christmas break would cause ‘huge anguish’.

Nick Hillman, the director of the Higher Education Policy Institute, questioned the decision by some vice-chancellors to halt face-to-face teaching, saying: ‘If teaching is moved online, it almost encourages students to go back home.’

He added that while calls for refunds grow, the difficulty for universities is that high-quality virtual teaching is no cheaper to deliver than in-person teaching and some universities are already under threat of going bust.

Nicola Sturgeon has backed disciplinary action being taken as a ‘last resort’ against students who breach new rules aimed at curbing the spread of Covid-19 on university campuses.

Speaking as the daily increase in cases reached a record high, with 558 Scots testing positive in the past 24 hours, the First Minister said that for those who are ‘flagrantly breaching rules, then of course discipline and enforcement has to be part of the answer’.

University principals – backed by the Scottish Government – have made it ‘absolutely clear’ to students that they must not take part in house parties.

As part of efforts to prevent outbreaks in university campuses from spreading into the wider population, all students are being asked to avoid pubs this weekend. 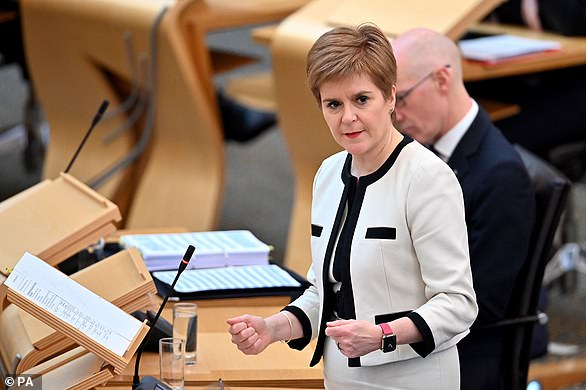 In addition, universities will adopt a ‘yellow card/red card’ approach to breaches of discipline, with students warned the consequences could include ‘potential discontinuation of study’.

Bruce Adamson, the Children and Young People’s Commissioner for Scotland, has raised concerns about the human rights implications of such measures, saying he is seeking an ‘urgent conversation’ with ministers and universities ‘to establish the nature and legal basis for these restrictions’.

Asked if she supports such a tough stance, Ms Sturgeon said: ‘Yes I do support universities taking disciplinary action as a last resort, and as a back stop.

‘I would not expect universities – and I spoke to principals this morning and I know this is not their intention – to use discipline as a first resort.

‘But as with the police, if you have people who are just flagrantly breaching rules then of course discipline and enforcement has to be part of the answer.’

The National Union of Students has claimed students are being ‘unfairly’ blamed for spreading the disease, and it condemned the ‘unjustified step of applying different rules to students over and above the rest of the adult population’. 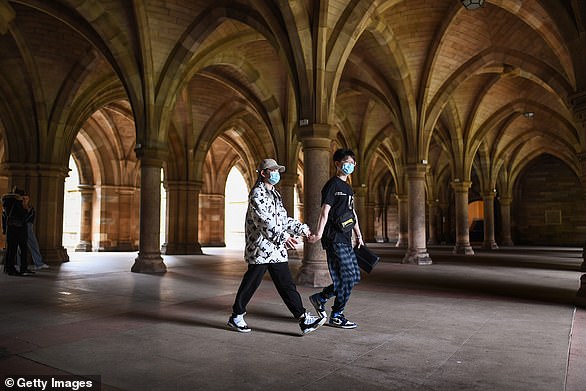 Ms Sturgeon also expressed sympathy for students, many of whom will be living away from home for the first time and could being having to self-isolate in halls of residence. Pictured: Glasgow University’s cloisters

But hundreds of students are currently self-isolating after outbreaks of the virus at Glasgow, Edinburgh Napier and other universities.

The latest daily coronavirus figures also show a rise in positivity rates – with almost one in 10 (9.5%) of those tested confirmed as having Covid-19.

At her coronavirus briefing on Friday, Ms Sturgeon also expressed sympathy for students, many of whom will be living away from home for the first time and could being having to self-isolate in halls of residence.

She insisted the decision to allow students to return to campus was not linked to the drop in income universities would have suffered had they been told to stay away.

Describing herself as the ‘devoted auntie’ of someone who has just left home to go to university, she told students directly: ‘I am so sorry, so heart sorry, that this time of your lives is being made as tough as it is just now. 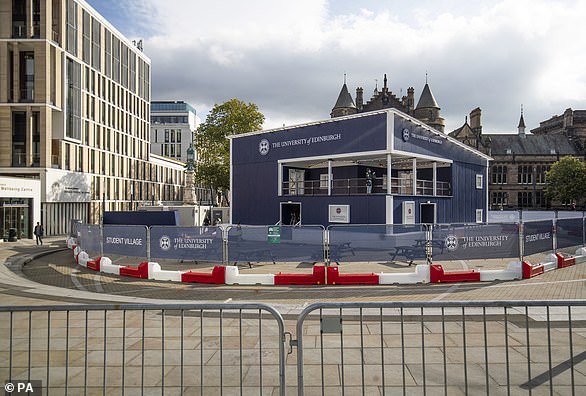 She said the Scottish Government is considering whether self-isolating students could be allowed to return to their family homes. Pictured: A bar in Bristo Square, Edinburgh, which is part of the University of Edinburgh’s Student Village

She said the Scottish Government is considering whether self-isolating students could be allowed to return to their family homes, adding guidance on this may be issued over the weekend.

She said she did not want to ‘underplay the significance’ of asking students not to visit pubs this weekend, but said it is not the only difficult request she has made during the pandemic.

Ms Sturgeon said: ‘I have asked people for six months now not to visit their vulnerable relatives in care homes.

‘I’m having to ask people to do really difficult things all of the time.

‘So I am asking all students for a weekend to not go to pubs, and hopefully that will help us stem these outbreaks.’

Thousands of teenagers are being offered classes only every other week, despite Ministers’ insistence that youngsters should be in full-time education.

Students in sixth-forms and further education colleges across England have had their timetable of face-to-face lessons cut by half.

College principals say having the whole intake back at the same time is unsafe and so have been forced to offer alternate weeks in the classroom instead.

Some institutions are accepting students only in the morning or in the afternoon. But parents have reacted angrily to the part-time provision and fear their children will be left behind peers who can attend full-time.

The arrangements are revealed in a report to be published next week by the Sutton Trust, a charity aimed at addressing disadvantages in education.

It is expected to say that school closures driven by the pandemic have had a devastating effect on social mobility. Since the start of term, pupils at Hills Road Sixth Form College in Cambridge follow a fortnightly timetable, with one week online and the other in class. Just half of the 2,600 students are on site at any one time.

‘Our student population is at least double the size of most schools, on a physical footprint that is not dissimilar to most school layouts,’ the college said.

In the South East, at least six colleges have limited the amount of time teenagers spend on campus. Godalming College in Surrey operates an alternate week policy. One parent fumed: ‘It’s a scandal. How are students supposed to compete with those in school sixth forms when they are only getting half the face-to-face teaching time?’

Government guidance says colleges should ‘resume delivery so that students of all ages can benefit from their education and training in full’. It does allow for rota systems to be put in place in the case of local lockdowns.

Havant and South Downs College in Portsmouth reviewed its plan for alternate weeks after protests from parents. Paula Williams, whose daughter is studying A-levels there, asked the principal in a letter: ‘How do you teach yourself chemistry?’

A Department for Education spokesman said last night that only a small number of colleges are failing to provide most lessons face-to-face.