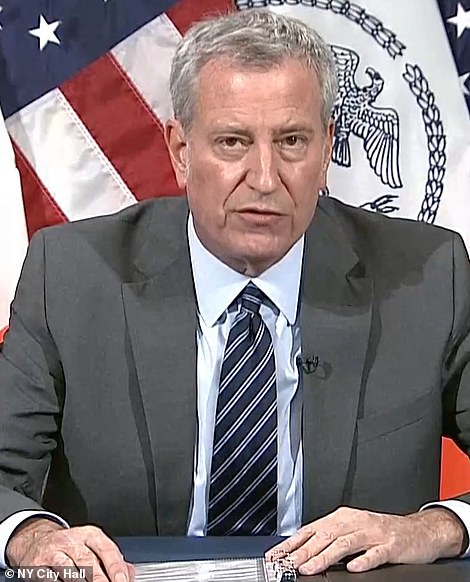 Mayor Bill de Blasio closing schools on Wednesday. He has been widely criticized for the decision

Mayor Bill de Blasio is being slammed for closing public schools – the only thing he has the authority to shut – while bars, restaurants and private schools remain open.

The mayor on Wednesday announced that starting Thursday morning, all public schools in New York City would switch to remote learning because the test positivity rate across New York was 3 percent. It was a threshold he set earlier this year.

The test positivity rate in schools is only 0.19 percent. What’s more, many private schools – which will only be forced to shut down if Governor Andrew Cuomo orders them to – remain open.

Now it has been revealed that de Blasio’s advisors told him his 3 percent standard was a flawed threshold that would result in some kids being unnecessarily sent home, driving their parents out of work again and sparking panic among city residents.

According to a senior official cited by The New York Daily News, ‘senior city health officials have expressed to the mayor and his administration their disagreement and concern with using the 3 percent threshold to close schools in the city, given that schools themselves are not at 3 percent and that transmission in schools is not as big a concern as it is in other settings like bars and restaurants.’

A spokesman for de Blasio’s office denied it.

Despite their expertise and complaints among parents that he is ‘oppressing’ the city, de Blasio is standing by the decisions and insisting that Cuomo will soon issue lockdown orders for private schools and businesses.

It seems increasingly likely given the rising COVID-19 rate and the growing number of deaths and hospitalizations across the city.  On Wednesday, the infection rate in New York City, according to state numbers, was 2.5 percent.

Cuomo says he’ll start shutting things down if it hits 3 percent. There were 35 deaths across the state – a marked increase from the single digit numbers seen in the summer. 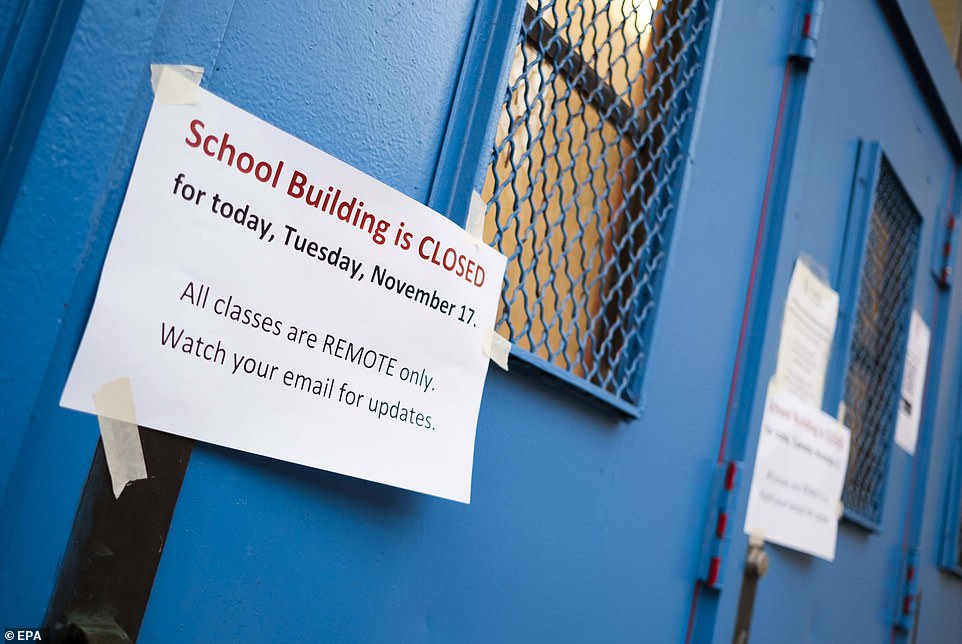 A sign on the door of a closed public school in Brooklyn, New York, USA, 18 November 2020. New York City Mayor Bill de Blasio announced on 18 November that the city’s entire public school system, the largest in the country, will indefinitely suspend all in-school classes

On Thursday morning, de Blasio was was roasted during an appearance on CBS This Morning where gave no other reason for sticking to the three percent threshold other than ‘because we were once the epicenter’.

He insists that Cuomo is about to shut down New York City, and is using that as his justification.

‘The governor made clear yesterday that New York State is going to very soon be applying an orange zone standard to New York City.

‘That will be closing indoor dining. Those restrictions are coming very soon,’ he said.

He insisted that his decision is not ‘political in the least’, adding: ‘We’re dealing with a new circumstance, a surge that we have to be very, very concerned about.

‘We’ve got to reset this equation.

‘So, I say to my fellow parents, I don’t expect this to go for long, I expect us to come up with a new standard that’s more stringent. 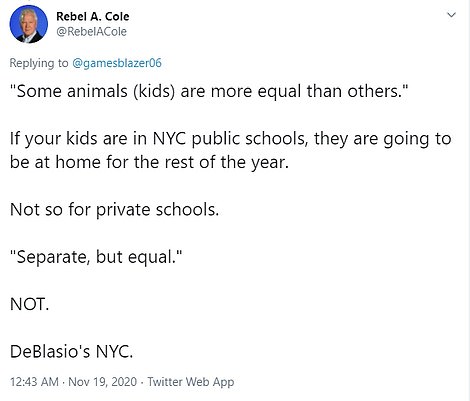 Asked why he took the decision to close schools when everything else was open, he said: ‘Because we were the epicenter of this crisis.’

He also warned that he would enforce a tougher standard once they reopened but did not say what that would be.

Governor Cuomo said on Wednesday that there is bound to be a ‘tremendous spike’ in cases after Thanksgiving next week that will speed up a lockdown.

Cuomo became frustrated on Wednesday as journalists questioned him on whether or not schools would be open tomorrow, and whether the decision was down to him or Mayor Bill de Blasio.

He called the first reporter who asked him about it ‘obnoxious’ and said he hadn’t been paying attention.

He then bit back at the second reporter who asked if schools would be open tomorrow, then snapped at a third who asked if it was him or de Blasio who made the rules.

‘You don’t know?’ he asked repeatedly.

Since the start of the pandemic, parents in New York City have found the conflicting remarks and rules confusing.

In his letter to teachers, the schools chancellor said: ‘This as been an eventful and challenging year on so many levels.

‘With your efforts and contributions, our school buildings have been safe places for teaching and learning for hundreds of thousands of students over the past several weeks.

This has been reassuring sign that our schools are safe, and we are grateful for the tireless work you do to ensure this is possible.’