The view from my hotel balcony window was like paradise.

Every morning I threw back the shutters to see a flawless blue Indian sky, and below me a palace courtyard all my own.

A shimmering swimming pool reflected the bright sunlight. Its surface was dappled with thousands of rose petals, scattered at dawn by women in flowing silk saris.

During the week I stayed in Mumbai, I never once swam in that pool. I never had time.

My life as an investment banker was about cramming as many meetings as possible into every hour of the day.

The more meetings I set up, the greater the chance of winning a lucrative deal and making lots of money.

Leisure time, even ten minutes of it, was not an option. 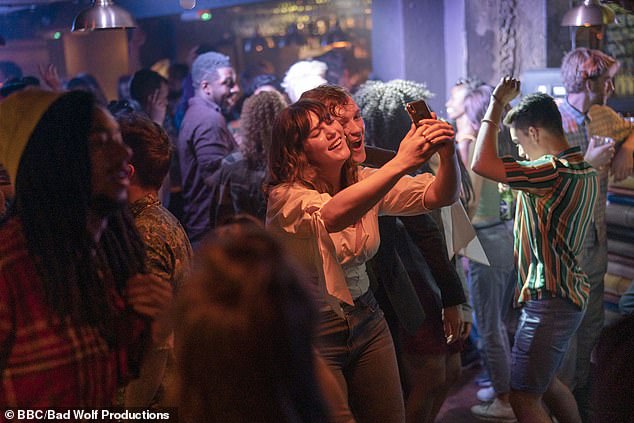 The insanely competitive world of high finance and astronomical rewards is portrayed in a new BBC2 drama, Industry, which started last week

Two words defined my existence: constant stress. I would wake, cortisol pumping, and instantly a wave of psychological pressure built up inside me.

My first instinct was to reach out and check my phone, and all through the day I would keep doing that compulsively.

Eating, talking, working at a computer screen, I had to monitor that phone non-stop.

To live at such intensity for even a day is exhausting. I did it for years.

Some people do it until it kills them or until they crack up, wrecked by alcohol abuse, drug addiction or mental breakdown.

That insanely competitive world of high finance and astronomical rewards is portrayed in a new BBC2 drama, Industry, which started last week.

It depicts the first few months in the careers of a band of ultra-ambitious young bankers, fighting for a handful of jobs at an investment bank in London’s Square Mile.

We see a culture of brutal bullying, sexual abuse and greed, where senior executives drive trainees without relent.

Myha’la Herrold plays Harper, an American graduate who refuses to be cowed by the alpha males around her and is not afraid to pull a few dirty tricks herself.

But the character who seems to me most closely drawn from reality is Hari, played by Nabhaan Rizwan.

Hari is desperate for approval, a diligent and insecure young man who believes his best route to success is to push himself mercilessly.

Fuelled by amphetamines and energy drinks, he works night and day, snatching a few minutes of sleep on the floor of a toilet cubicle in the office bathroom after everyone else has gone home.

The first episode reached a horrifying climax when Hari suffered a seizure or heart attack behind the locked toilet door and died.

His storyline mirrors the tragic real-life fate of Moritz Erhardt, who died aged 21 after going more than 72 hours without sleep in a frenzied effort to earn a full-time job at Bank of America Merrill Lynch in 2013.

Erhardt was near the end of a seven-week internship and hoping to be offered a post at £45,000 a year as an analyst.

Desperate to prove himself, he was working until 5am every morning, then taking a cab back to his flat in the nearby East End, where he showered and shaved before pulling on a clean white shirt and getting back into the waiting taxi to return to his desk.

That self-destructive routine is such a ritual for young hopefuls in the world of City banking that it even has a name. They call it the ‘magic roundabout’.

After the third night, Moritz went into his flat and did not emerge alive. He stepped into the shower, suffered a seizure and collapsed face-down in the shower cubicle with the water running.

His body was discovered 12 hours later.

I remember my shock and sadness — but not my surprise — when I read that story.

We were mostly graduates of the London School of Economics at the end of the Nineties, and a career in finance was the logical next step.

Looking back, I realise how lucky I was that I didn’t go straight into investment banking, the most exciting but demanding path. Instead, I worked my way up through a steadier, less glamorous succession of posts.

Within three months of leaving education, half my friends were getting into black taxis at five in the morning, to start days that would not end before 9pm at the earliest. 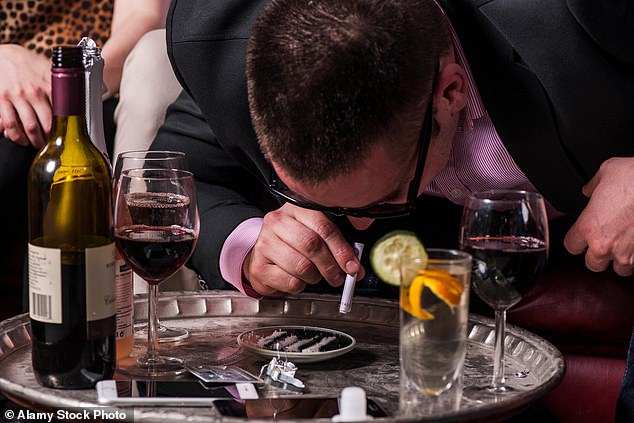 It depicts the first few months in the careers of a band of ultra-ambitious young bankers, fighting for a handful of jobs at an investment bank in London’s Square Mile

One chap I knew was assigned to a deal with an impossible deadline and didn’t leave the office for four days.

Eventually, a manager pulled him to one side and told him bluntly that he stank.

Other colleagues were complaining about the smell. He was ordered to go home, wash and change — and come straight back.

It takes a certain sort of person to withstand that pressure, and ambition is only part of it.

These young men (typically they are male) will be exceptionally bright but insecure.

Above all, they are needy. They have to prove themselves, to their peers and their families.

At university, they have been brilliant science or maths students, but prone to anxiety and overanalysing tasks.

Now they are pitched into a world where there are huge rewards and status for success, but intense stigma for failure.

That is a heady, compelling mix for these people. It promises them the validation they crave, and the wealth to prove it.

For many it is addictive, and they can’t shake it even if they learn to hate everything they are becoming.

One friend of mine landed a job at a leading investment bank but, within months, discovered his new life was making him miserable. He felt he had to escape.

Since he still needed to pay his rent, he decided to apply for a much less stressful job at an investment fund, as a mere assistant to the executives.

His CV was submitted, but the personnel department saw his qualifications and assumed there had been a mistake — so they hired him as an analyst, at £300,000 a year.

He couldn’t turn it down and, 20 years later, he is still in the City, still hating the job but earning ludicrous sums.

To an outsider, it might seem impossible that anyone could need a salary so bloated. It is the equivalent of a substantial lottery win, year in, year out.

Nevertheless, people find a way to adapt to the expenditure until they can’t do without it.

More than that, they see others who are earning even more. The driving, competitive greed that lured them into this world in the first place will never allow them to stop striving.

At the bank where I worked, it was the senior staff who never let themselves ease off for an instant.

When you are inside the machine, it all makes sense. There are no prizes for second place, no contracts for losers. Failure means losing your job and with it everything that gives your life meaning. 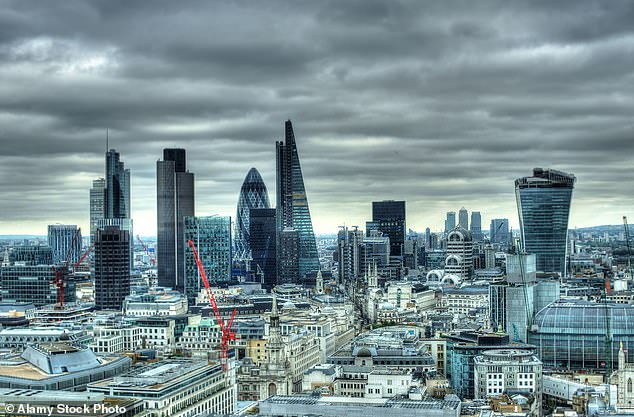 The self-destructive routine is such a ritual for young hopefuls in the world of City banking that it even has a name. They call it the ‘magic roundabout’

One man I knew was in charge of a lucrative investment for an international fund that owned in its portfolio a group of rehabilitation clinics.

The investment was exceptionally complex and the banker could not delegate any of the work. He had to handle it all himself, which meant sleeping just two or three hours a night and working seven days a week.

He kept himself going with cocaine and other drugs. Inevitably, the drug abuse spiralled until he suffered a complete breakdown.

The fund sent him into rehab — at one of the very clinics that had driven him over the edge.

Other people are hollowed out by the rapacious nature of the work. I knew a man who was likeable, even decent, when he landed a job with a stellar investment firm.

They specialised in buying ‘non-performing consumer loans’ from lenders, and they turned spectacular profits.

In plain language, these loans were mortgages and other debts that had been foisted on poor people in developing markets. They couldn’t afford the payments and they were defaulting.

This company would engage thugs (indirectly, keeping them at arm’s length, of course) to extort the money owed, at crippling rates of interest.

When he realised what was going on, this man told me he was morally torn — people thousands of miles away were suffering but he was earning a fortune.

He swallowed his conscience and stayed in the job. I no longer think of him as a friend. What he does is not a good way to live your life.

But I am still good friends with a former broker who told me that every Friday at his bank, a victim was selected for a vicious, abusive ritual — crowning the ‘W***er of the Week’.

An outsize tweed jacket with a giant ‘W’ sewn on the back was hung on a chair in the middle of the floor.

To huge barracking and heckling, the name of a junior broker would be announced (it was always a junior) and he would have to make the walk of shame across the hall to don the jacket, endure howls of abuse, then wear it all day.

Today, such bullying would never be tolerated.

The victims would sue. But ten or 15 years ago it was normal, as was the treatment meted out to another friend who worked 100-hour weeks at an investment bank.

Each Saturday, he would be summoned to give a two-minute presentation to his head of department — who kept him waiting for 12 hours on Saturdays and often all of Sunday, too.

As he sat, wasting his weekend, he would see his boss chatting on the phone, entertaining his children in the office, even practising his golf putts.

I was wasting my life, too, unable even to spare a few minutes for a swim in that pool strewn with petals.

I had a wonderful family but I wasn’t spending time with them. I had discovered yoga and meditation but I wasn’t enjoying their benefits. So I quit.

One great benefit of a life in high finance is that it makes you realise that anything is possible, if you really want it. All I had to do was decide what I wanted.

To my own surprise and the astonishment of my colleagues (and mother-in-law!), I discovered that what I wanted was to open a chain of yoga businesses.

Yoga and meditation are the perfect antidotes to the pressures of modern life and I felt passionately that I needed to help other people feel the benefits, too.

Yoga gives me a deep calm and a powerful sense of who I am.

Using the rigour and focus that I learned in the City, I have built up a business that organises yoga and mindfulness programmes for companies and individuals, including an online film library that makes practice possible even during lockdown.

We also specialise in training people to become yoga teachers.

It took a career in banking to teach me that money isn’t everything. Sometimes, it’s the rose petals that matter most.