A couple who risked their lives to drag a shark attack victim to shore have been hailed as heroes by police who shot at the four-metre predator and drove it off.

Charles Cernobori, 58, from Broome, WA, was killed by the shark while bodyboarding 40m out at Cable Beach on Sunday at about 8.45am.

A couple nearby saw thrashing in the water and rushed in to the murky waters despite the risk to their own lives to drag the man to shore. 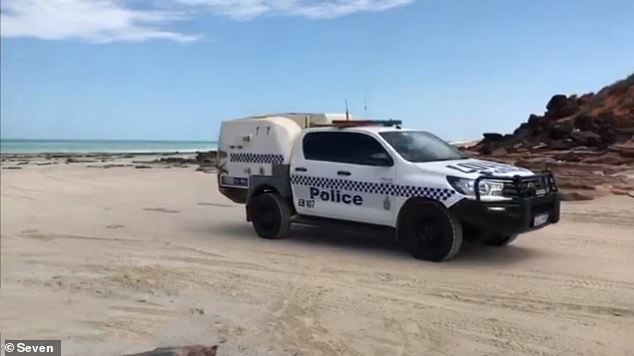 WA Police at Cable Beach on Sunday. They drove up and down telling people to get out of the water after Mr Cernobori was killed. They shot at the shark which disappeared 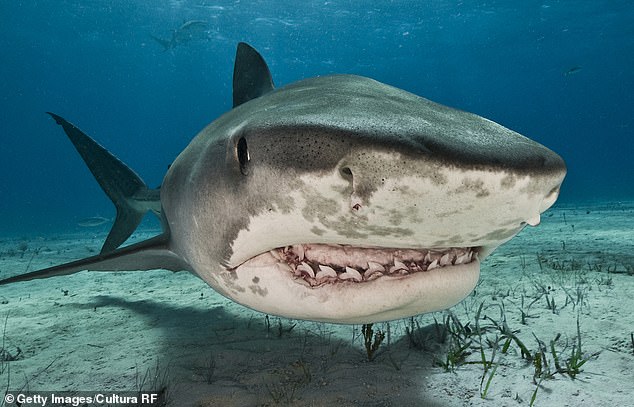 The local hotel worker had been bodyboarding alone before he was bitten on the arm and upper thigh by a suspected tiger shark.

It is understood he also lost his hand in the attack.

The couple tried to save him once they got him to shore, but sadly he had lost too much blood and died at the scene.

West Kimberley Inspector Gene Pears said the pair had shown great courage dragging the man to the beach and calling for help.

‘I commend them for their actions, obviously that would have been pretty horrific for those people,’ he told The West.

‘It was very brave to enter the water and do what they did. Very brave, very traumatic and very scary, you’re entering water where you know there’s been a shark attack.’

The shark, thought to be a tiger shark, lurked close to the shore for half an hour after the attack.

Stinging jellyfish and dangerous saltwater crocodiles are a more common threat than sharks in the warm waters of Cable Beach, a popular tourist spot in Western Australia’s north

Western Australia police rushed to the scene and shot at the predator which disappeared. It is believed they missed as no dead shark was found.

The WA Department of Fisheries is now in charge of the situation. DNA testing is to be done to identify the shark species with results due in coming days.

It is understood they will only shoot a shark if it is positively identified as the killer – which is difficult to know once it has swum away.

The Department sent a patrol vessel to monitor the area and all local beaches remain closed until Monday morning.

The man killed has been identified as Charles Cernobori who lived in a Broome caravan park and worked in a nearby hotel.

The attack at the world-famous beach came on the last day of the official tourist season, at a remote stretch about 2km north of the main tourist area.

It has been more than 27 years since the last fatal shark attack at Cable Beach. 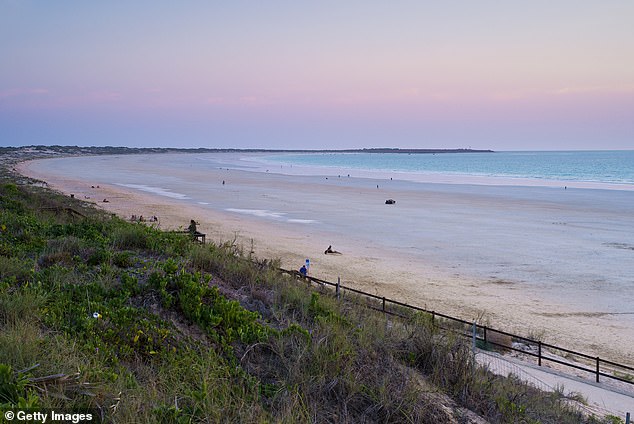 Broome, Western Australia – all the local beaches were closed after the attack 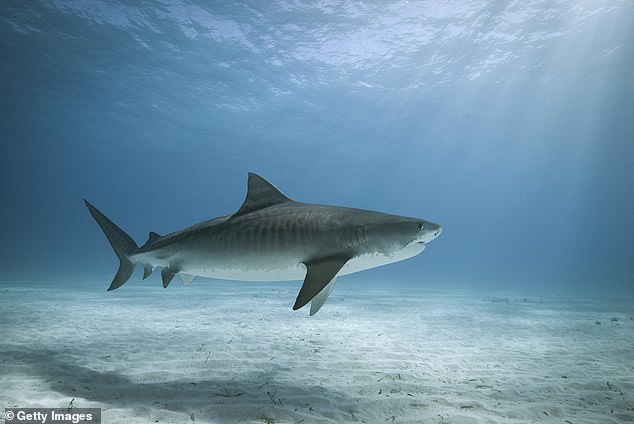 The bodyboarder was 2km north of the tourist section of Cable Beach, in a remote area by himself, in murkey water at 8.45am when the attack happened (file picture of a tiger shark)

It came as a shock to local tourist operators as large sharks are rare in the warm waters, the main threats being stinging jellyfish and dangerous saltwater crocodiles.

Broome is, however, renowned for its fishing and anglers often encounter potentially dangerous tiger and bull sharks.

‘We’ve been getting a lot of bait fish down there. I would say that has something to do with it. These bait balls — there’s always going to be sharks there,” he told The West.

Mr Roberson said there had been about two dozen cars over a 5km stretch of Cable Beach on Sunday and police drove along with a loudhailer telling people to get out of the water.

There have been 23 shark attacks in Australian waters this year so far of which eight have been fatal:

January 5, Esperance, WA: Gary Johnson, 57, killed by a great white while diving with his wife near Cull Island in 7m deep water.

November 22, Cable Beach, WA: Charles Cernobori, 58, who worked at a Cable Beach hotel was killed by a 4m suspected tiger shark while bodyboarding 2km north of the main tourist section