Scores of walkers flouted social distancing guidelines as they queued to reach the summit of Mount Snowdon this weekend despite the Welsh Government urging people to avoid all unnecessary travel.

Walkers stood crammed in queues as they neared the top of the highest mountain in Wales, which sits in Snowdonia National Park, in their climbing gear in an effort to capture a picture of themselves at the peak.

The scenes come just hours after it was revealed that 60 per cent of the Welsh population will be put under lockdown from tomorrow after three more council areas are added to the Government’s list.

This weekend regular walkers were left shocked after hundreds of people descended onto the famous peak despite coronavirus warnings. 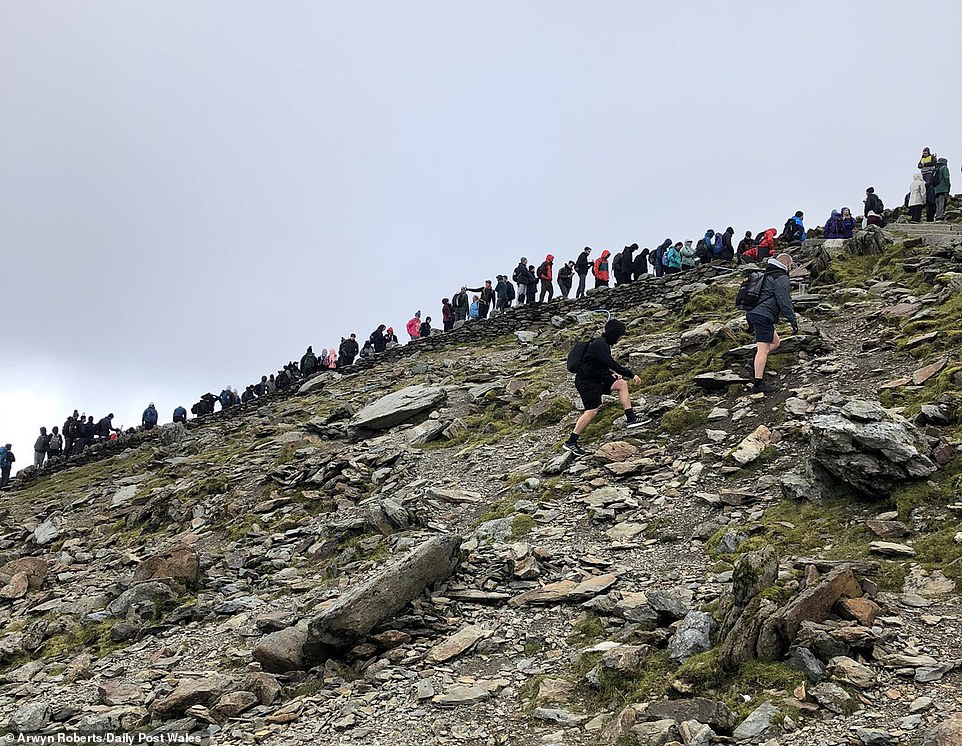 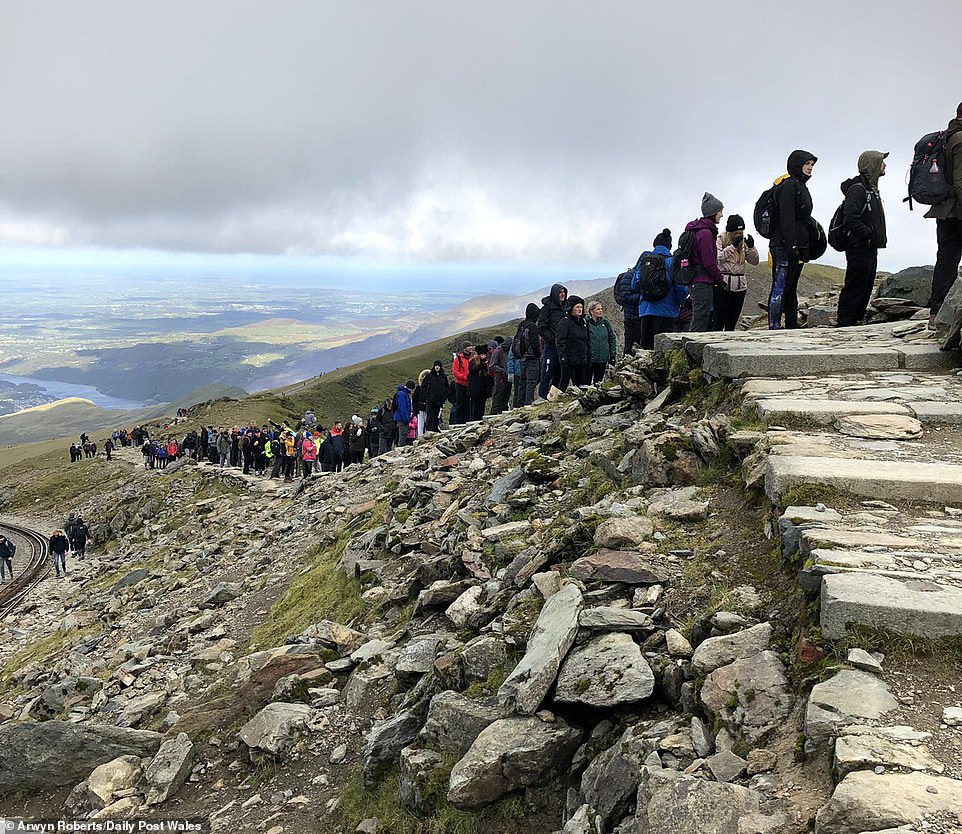 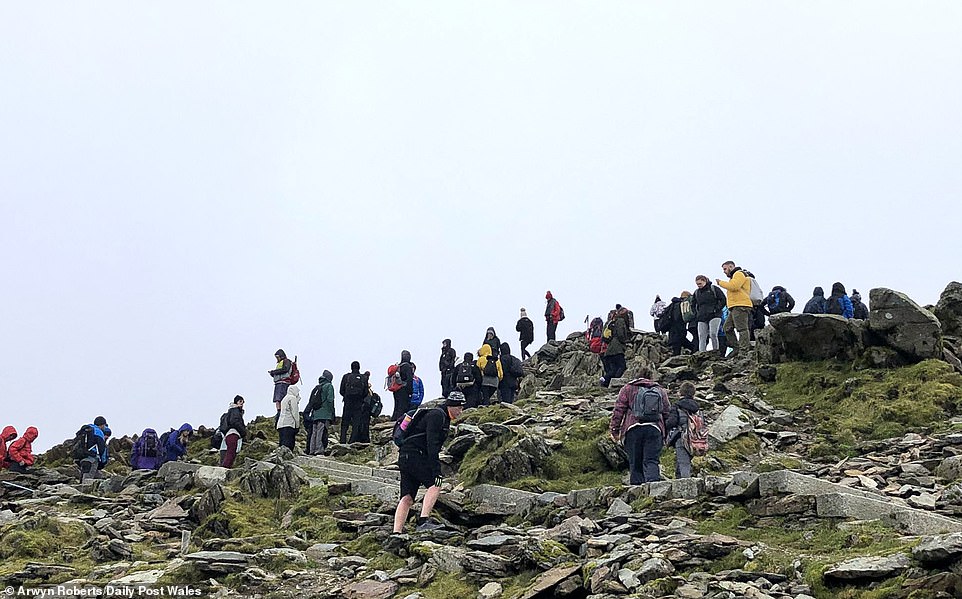 Arwyn Roberts, from Llangefni, who climbs the peak once a week said he was ‘quite shocked’ by the scenes and described how the queue extended for 200 to 300 metres.

He told North Wales Live: ‘I managed to find somewhere to park and I had planned to take a quieter route up the mountain – but there were no quieter routes.

‘I usually walk up the mountain first thing in the morning and I haven’t been there at the weekend for a long time, so I was quite shocked by what I saw.

‘Even from below you could see the line of people stretching down the mountain from the summit. The queue was already 200 to 300 metres when I reached the top.’

The scenes come as 60 per cent of the Welsh population face a local lockdown tomorrow after some 362 new cases of coronavirus were reported in Wales in the last 24 hours alone- bringing the total to 22,945.

Neath Port Talbot, Torfaen and the Vale of Glamorgan will be covered by the rules, which mean people will not be able to enter or leave the areas without a reasonable excuse from 6pm on Monday.

Residents will not be able to meet indoors with anyone they do not live with, with extended households suspended. 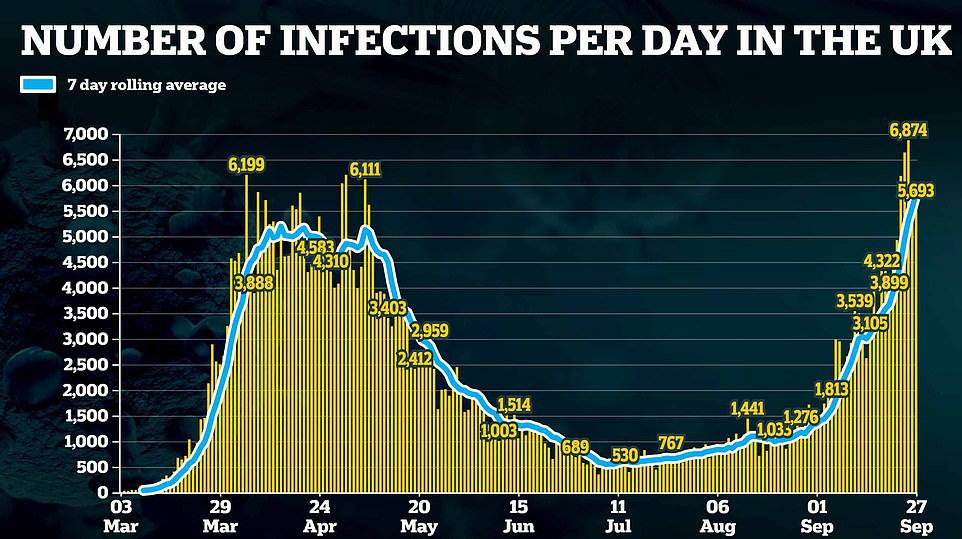 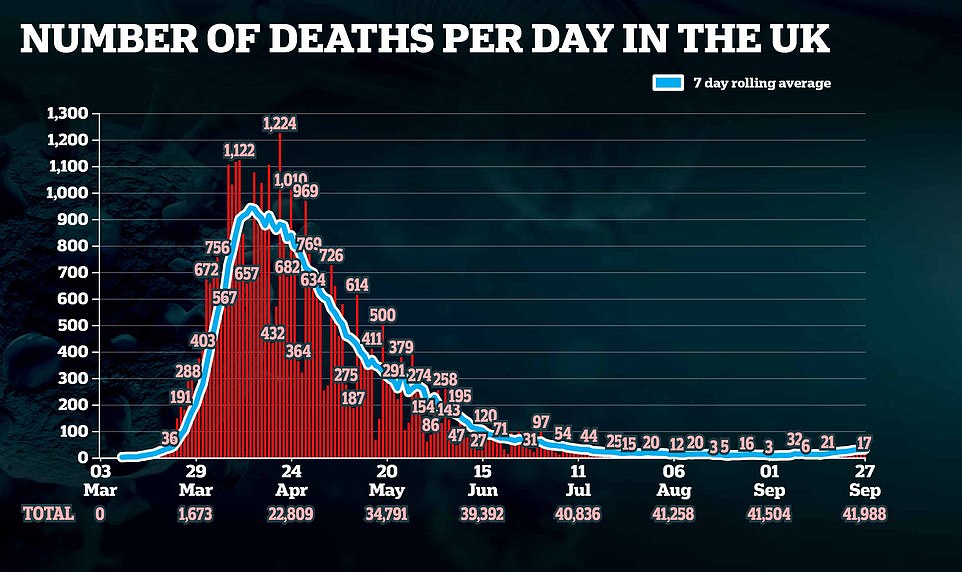 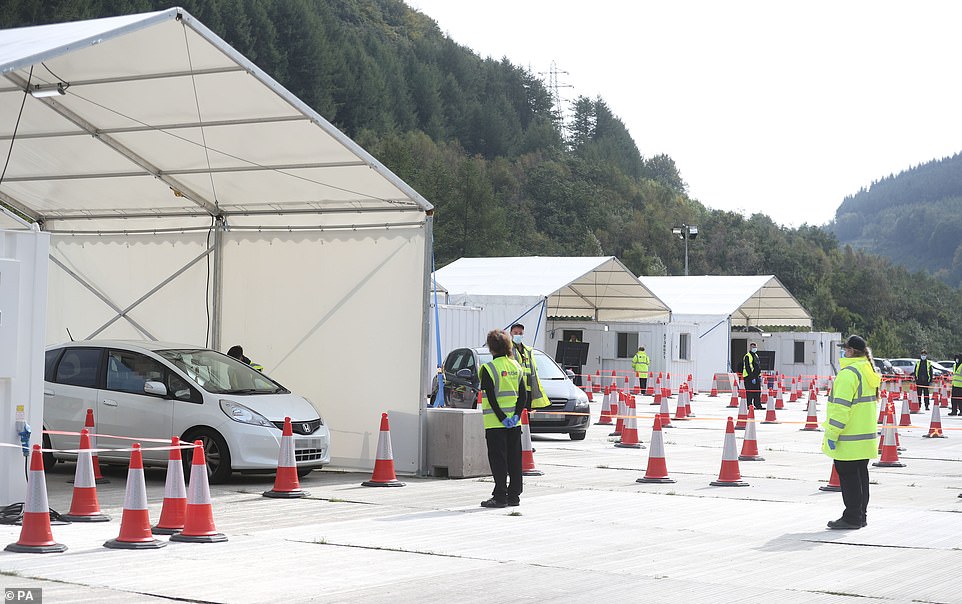 It comes as  60 per cent of the Welsh population faces a local lockdown from tomorrow after three more council areas are added to the Government’s list. Pictured: Cars at a drive-thru coronavirus testing station at Ebbw Vale in Wales

Further measures were also introduced in Llanelli, in Carmarthenshire, on Saturday evening.

It means more than 1.8 million people in Wales – nearly 60 per cent the population – will be under local lockdowns from Monday night.

Wales’s First Minister Mark Drakeford said in a statement: ‘Following a worrying rise in cases of coronavirus across South Wales, we took action on Friday to introduce local coronavirus restrictions in Llanelli and local restrictions will come into force in our two largest cities – Cardiff and Swansea – tonight.

‘We are now taking further action and placing three more areas under local restrictions in South Wales – Neath Port Talbot, Torfaen, and the Vale of Glamorgan – because we are seeing rising rates in these three areas. These areas also share borders with local authority areas where rates are much higher.

‘Introducing restrictions in any parts of Wales is always an incredibly difficult decision for us to make. But we’re acting to protect people’s health and to try and break the chain of transmission and stop the situation from getting worse.

‘This is not a regional lockdown – this is a series of local restrictions in each local authority area to respond to a specific rise in cases in each area, which have distinct and unique chains of transmission.

‘In some places, such as Caerphilly and Newport, we have seen really positive falls in response and we hope they can begin to be relaxed if they continue.

‘It’s really important everyone follows the rules where they live. We need everyone’s help to bring coronavirus under control. We need everyone to pull together and to follow the measures which are there to protect you and your loved ones.’

Earlier this week the Prime Minister set out a raft of measures designed to clampdown on the disease, including imposing a 10pm curfew on all pubs, bars and restaurants in England and limiting the number of guests at a wedding to 15. 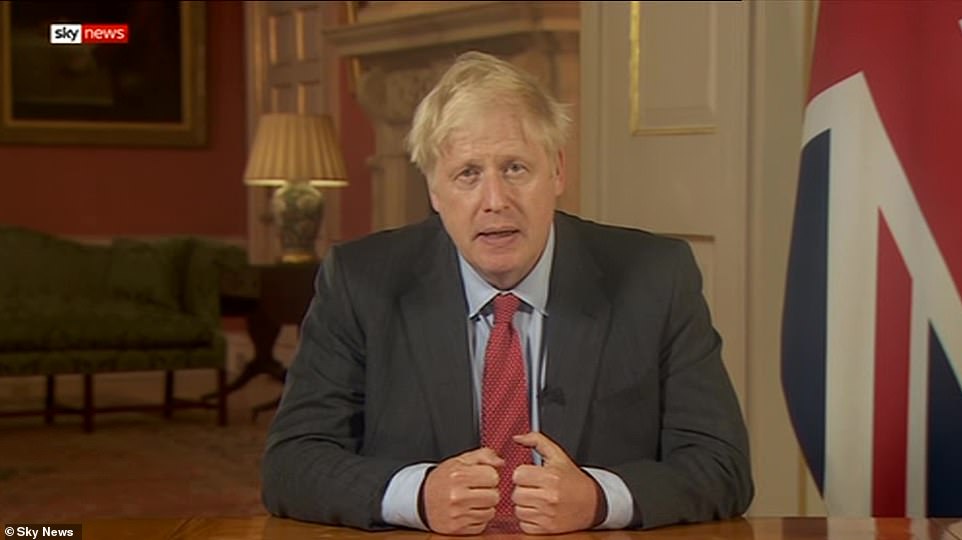 The Prime Minister said it was necessary to reintroduce the measures to avoid a dramatic surge in deaths and a second, economically devastating total lockdown

Under the new measures, plans for a partial return of sports fans to stadiums from October 1 have been ‘paused’ while the number of people allowed to attend weddings is being reduced to 15.

Mr Johnson also announced the end of the Government’s back to work drive, urging Britons to work from home if they can.

Face masks will also have to be worn on public transport and in many indoor spaces, including shops, shopping centres, indoor transport hubs, museums, galleries, cinemas and public libraries.

Just hours after setting out the new measures, the Prime Minister issued an emotional plea to the nation and warned Britons they faced a long hard winter of police-enforced curbs on their freedom to see off coronavirus.

He also hit out at his critics – including Tory MPs and business leaders who warned of the economic impact of the tough measures, adding: ‘To those who say we don’t need this stuff, and we should leave people to take their own risks, I say these risks are not our own.

‘The tragic reality of having Covid is that your mild cough can be someone else’s death knell.

‘And as for the suggestion that we should simply lock up the elderly and the vulnerable – with all the suffering that would entail – I must tell you that this is just not realistic.

‘Because if you let the virus rip through the rest of the population it would inevitably find its way through to the elderly as well, and in much greater numbers.’