This is the heartwarming moment a husband and wife were reunited in a care home after almost two months apart.

Harry Wilsden, 91, can be seen fighting back tears as wife Doreen, 87, greets him with a hug and asks: ‘is it really you?’

An emotional Doreen can then be heard saying ‘I can’t believe it’s really Harry’ as staff convince her that she is not seeing things.

The couple were then seen walking hand in hand down the corridor together.

They have been married for 67 years but were separated when Harry caught Covid-19 and was taken to hospital.

Doreen moved into the Grange Care Home in Darlington as their family had planned, but Harry was unable to move in until he received the all-clear from the hospital.

Staff were concerned the loving pair may never see each other again due to the virus, with tough restrictions in place on visits to hospital as well as care homes. 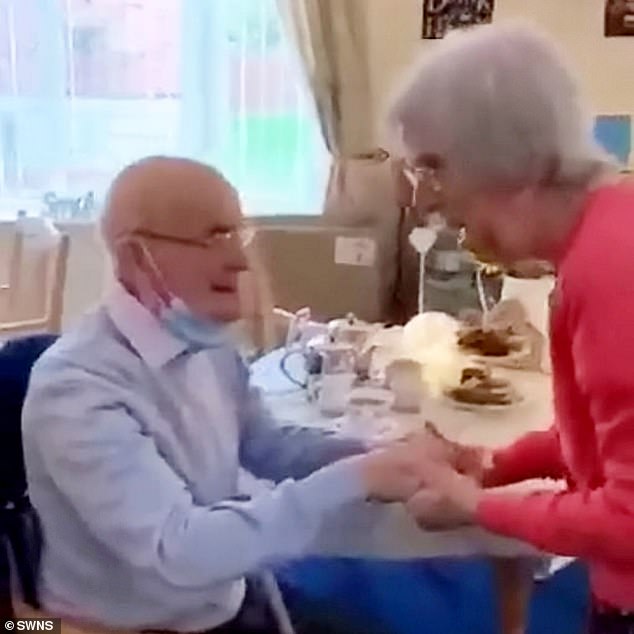 This is the heartwarming moment Harry Wilsden, 91, can be seen fighting back tears as wife Doreen, 87, greets him with a hug and asks: ‘is it really you?’

But Harry was determined to recover and avoid another day without his wife.

After being given the green light by medics, the former postman was moved into the home where staff reunited him with his other half.

Ann Holmes, their youngest daughter, said: ‘Everyone at The Grange has been so supportive, our parents are where they should be; safer together.’

Harry, the last survivor of eight siblings, met then sixteen-year-old Doreen at their local youth club, shortly after returning from his National Service in Greece. 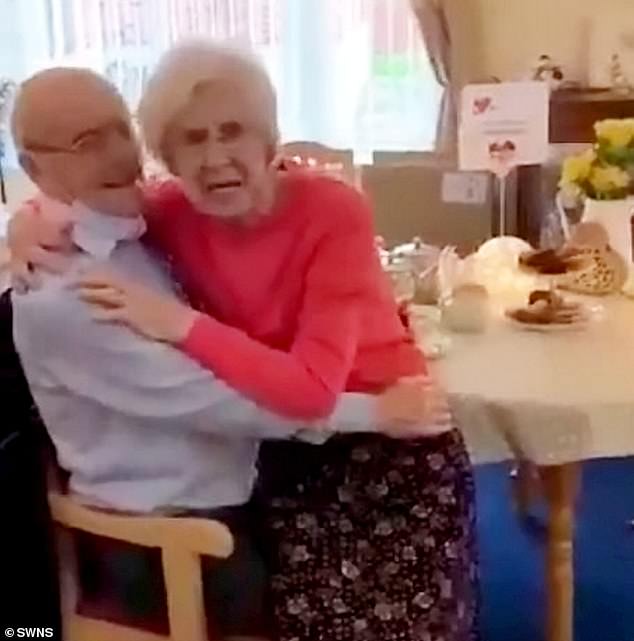 They have been married for 67 years but were separated when Harry caught Covid-19 and was taken to hospital. But Harry was determined to recover and avoid another day without his wife

They wed in 1953 and have two daughters, Christine and Ann, and one granddaughter, Laura.

Doreen trained as a Nursery Nurse and worked at community special school, Mayfair School in Darlington.

Harry was a popular figure in the Darlington area, his family said.

He held various jobs, including as a postman, but the job he loved most was working as a fireman during the end of the age of steam railways.

His daughters said one of his favourite anecdotes was the time the train he was working on got stuck in the snow, in the middle of nowhere.

Granddaughter Laura, a qualified nurse who has worked throughout the pandemic caring for Covid patients, said: ‘They really are loves young dream – your care means everything!

‘Thank you from us all.’

Care homes will finally be able to allow in-person visits over Christmas by testing relatives for Covid-19, Health Secretary Matt Hancock has announced.

The Government is piloting rapid testing in 20 care homes in low-infection areas in Hampshire, Devon and Cornwall to see if it is safe to let family members visit vulnerable residents indoors.

Under current rules, relatives can often only see loved ones through plastic screens. A small number of care homes had been allowing garden or drive-through visits, though moving into winter these have been increasingly less practical.

There have been numerous reports of elderly people in care homes rapidly deteriorating both mentally and physically as a result of being isolated since March.

The tough policy on visits came after more than 20,000 care home residents died from Covid-19 during the first wave of the pandemic, in part because asymptomatic workers were allowed to freely move between care homes without being tested for the disease.