Speaking at the Infected Blood Inquiry yesterday, the peer said the governments of the day failed to take action despite knowing imported blood supplies were ‘contaminated’.

Thousands of Britons were infected with HIV and hepatitis in the 1970s and 1980s after being treated with blood products imported from America.

As Labour health minister between 1974-1976, Lord Owen said he tried to reduce the number of tainted products coming from the US. 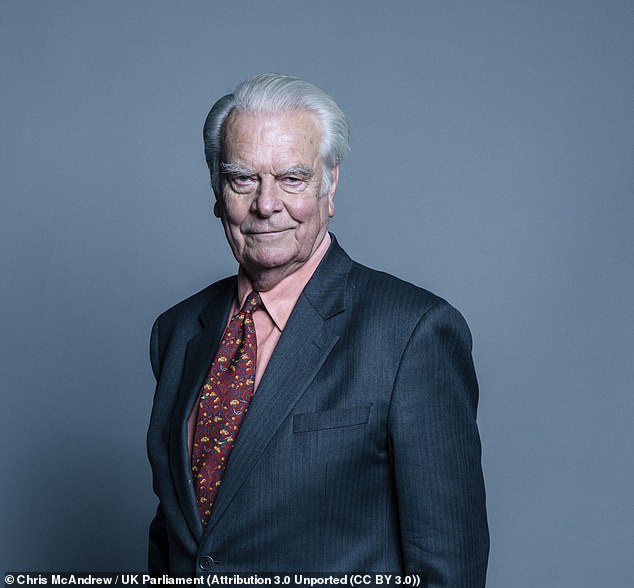 But after he left in 1976, he said the department quietly abandoned the policy.

‘It’s maladministration… I am appalled this commitment was never secured – as a result infected blood was introduced long after it needed to be,’ he told the first day of the reopened inquiry.

The contaminated blood scandal has been labelled the worst treatment disaster in the history of the NHS amid claims of a government cover-up.

The current inquiry comes after two previous ones were branded whitewashes.

The peer said he had later ‘kicked’ himself for not realising earlier that something was ‘seriously wrong’ with the self-sufficiency policy he had pledged to pursue in the mid-1970s through the commitment of £500,000 in funding.

Lord Owen said he understood the ‘anger’ and ‘resentment’ of those affected.

The inquiry heard that at the time Lord Owen was at the Department of Health and Social Security (DHSS), a new therapeutic treatment for haemophilia patients had emerged, known as anti-haemophilic globulin concentrate (AHG), an example being the product Factor VIII, which were commercially available.

It also heard how the UK had insufficient amounts of AHG to meet the demand from clinicians.

Lord Owen, a qualified doctor, explained the new treatments relied on pooled human blood that could carry the risk of passing on infections such as hepatitis.

‘The bigger the pool of donors, the greater the risk, because one donation in a thousand will contaminate,’ he said.

Asked by counsel to the inquiry Jenni Richards QC if he recalled any discussions within the department over these risks, Lord Owen replied: ‘Yes.’

Lord Owen said he wanted to end a reliance on imports largely from America, but the move to self-sufficiency was going to take two to three years.

‘What I did feel was that you’ve got to stop this blood coming in from, mainly America,’ he said.

He explained he had realised it was ‘dangerous’ to ‘rely on blood coming in from abroad, from people who were giving their blood for money’.

‘We wanted to get to that point at the earliest possible opportunity because you were doing what you didn’t want to do, which was buying contaminated (products),’ he added.