The Metropolitan Transportation Authority is reportedly considering an austerity plan that would go into effect if the federal government doesn’t provide $12billion in emergency aid by the end of next year.

The plan, details of which were first reported by the New York Daily News, would save the transit agency money by slashing 9,367 workers from the payroll.

Most of those who would be laid off – 8,238 employees, or 88 per cent – are transit workers who man the subways and bus services. 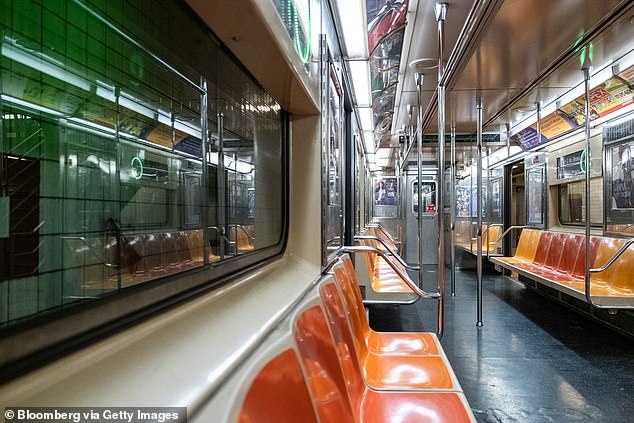 Empty seats are seen above on a New York City subway car in June. The COVID-19 pandemic has drastically reduced ridership on the city’s public transportation systems

The other 12 per cent – 1,129 employees – would come from the Metro-North Railroad, the Long Island Rail Road, and the MTA’s bridge-and-tunnel operations, according to the Daily News.

The layoffs are expected to save the transit agency $1.27billion per year.

The MTA is also expected to increase fares and tolls, though the agency has yet to indicate by how much.

The frequency of bus and subway service would be cut, though it remains unclear to what extent.

Some bus routes could be axed entirely, though riders will not be left more than a half-mile away from another bus route or subway line, according to the Daily News.

Overall, service on bus routes that remain active will be slashed by a third.

As for the subway, weekday schedules would be pared down by 40 per cent while some weekend services may be suspended entirely.

Critics of the plan say that fewer trains on the rails or subway mean longer waits and more crowded cars while the pandemic continues.

‘This would absolutely be an end to the New York way of life,’ Andrew Albert, the non-voting rider advocate on the MTA board, told the Daily News.

‘People expect to leave their home or office and get a train or bus within a very reasonable wait of time. 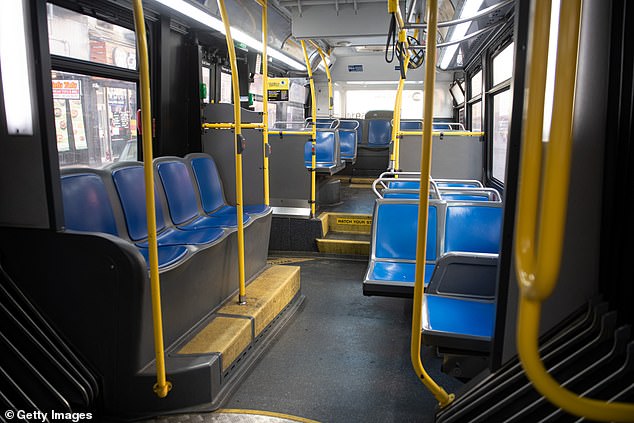 The Metropolitan Transportation System is reportedly considering an austerity plan that would cut subway and bus service by as much as 40 and 30 per cent, respectively. The above image shows an empty New York City bus on May 16

‘Cuts of this magnitude mean virtually no social distancing. It’s just a nonstarter to me.’

For the subway, wait times would increase by eight minutes; for the bus it would be 15 minutes.

Long Island Rail Road and Metro-North trains would run at every hour or two.

The MTA admits that the cuts and layoffs won’t be enough to cover next year’s budget deficit. 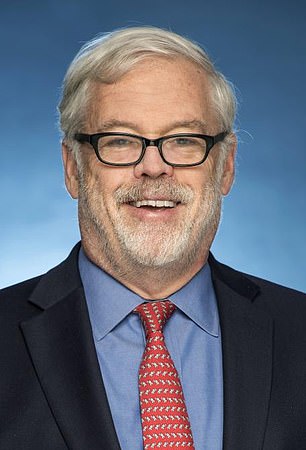 ‘Our hand may be forced if the federal government doesn’t come through with the funding,’ MTA chairman Pat Foye told a news conference on Tuesday

Without federal aid, the MTA would not only have to institute harsh service cuts and layoffs, but it will also have to shelve plans for urgent upgrades to the aging signal system that has been blamed for many delays.

‘Our hand may be forced if the federal government doesn’t come through with the funding,’ MTA chairman Pat Foye told a news conference on Tuesday.

‘We are moving ahead hoping for the best but preparing for the worst,’ MTA spokesman Ken Lovett said.

‘If the federal aid comes through in that amount, we will adjust our spending plan accordingly.’

Transit officials hope that the Democrats can somehow win both runoff elections for the two US Senate seats from Georgia, which are scheduled for early January.

If the Democrats win both of those races, it would evenly split control of the Senate, with each party holding 50 seats.

Vice President-elect Kamala Harris would then serve as the tie-breaker vote in case of a deadlock.

The incoming president, Joe Biden, is believed to be eager to provide another coronavirus stimulus package, though the size and scope of a relief bill – if there will be one at all – will depend on Republican cooperation in the Senate.

Earlier this year, MTA board members suggested raising a gas tax on car commuters to help fund transportation projects and to reduce the reliance of the MTA, and the millions of daily commuters it serves, on federal funding.