A murder investigation is under way after a man was stabbed to death in north west London.

Police officers, the London Ambulance Service and London Air Ambulance were called to Harrow Road in Kensal Green to reports of a stabbing at around 2pm today.

Despite the efforts of the emergency services, the man was pronounced dead at the scene.

A 50-year-old man has been arrested and is currently in police custody, the Metropolitan Police said. 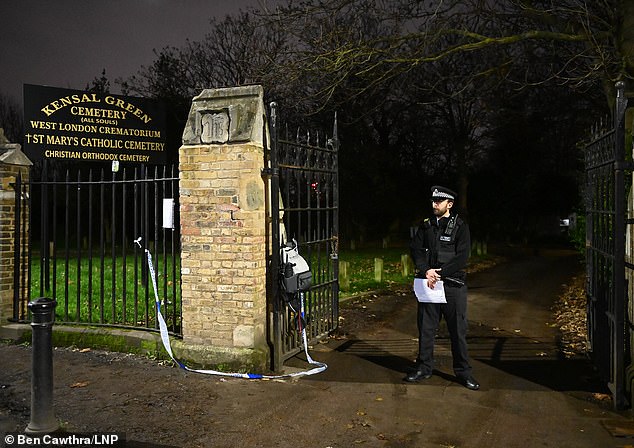 Officers remain at the scene and have cordoned off part of Kensal Green Cemetery as they carry out their investigations.

One witness told MyLondon: ‘Something happened at Kensal Rise cemetery. Armed police are patrolling the area.’

No further details about the victim have been given and enquiries are on going to trace his next of kin, the force said.

In a statement the Metropolitan Police said:  ‘Police were called at 14:00hrs on Sunday, 22 November to Harrow Road, Kensal Green to reports of a stabbing.

‘Officers, London Ambulance Service and London Air Ambulance attended and found a man-no further details- suffering from stab injuries. Despite the efforts of emergency services he was pronounced dead at the scene.

‘Enquiries are ongoing to trace his next of kin.

‘A 50-year-old man has been arrested in connection with this incident and is in police custody.

‘Officers remain in the area as enquiries continue.’