Marco Rubio said Thursday that the U.S. government will swear in the President in January following a ‘fair election’ after Donald Trump refused to say Wednesday if he would peacefully give up his seat in January if Joe Biden wins the election.

‘As we have done for over two centuries we will have a legitimate & fair election,’ the Florida senator tweeted the morning after Trump made the questionable comments.

‘It may take longer than usual to know the outcome,but it will be a valid one,’ he continued, in a likely reference to mail-in ballots holding up the outcome. ‘And at noon on Jan 20,2021 we will peacefully swear in the President.’

‘Fundamental to democracy is the peaceful transition of power; without that, there is Belarus,’ the Utah Republican said in reference to the European country experiencing mass protests as its president sought a sixth term and was secretly sworn in despite the opposition candidate claiming they received 60-70 per cent of the votes.

‘Any suggestion that a president might not respect this Constitutional guarantee is both unthinkable and unacceptable,’ Romney continued in his tweet. 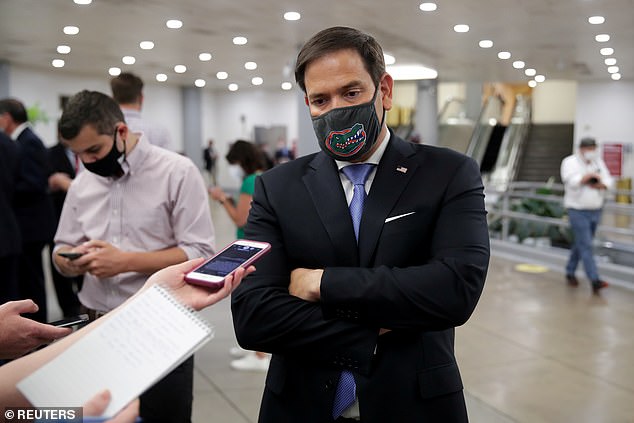 Republican Sen. Marco Rubio assured Thursday that the U.S. will ‘peacefully swear in the President’ in January after Trump refused to say if he would leave office without a fight if he loses to Joe Biden 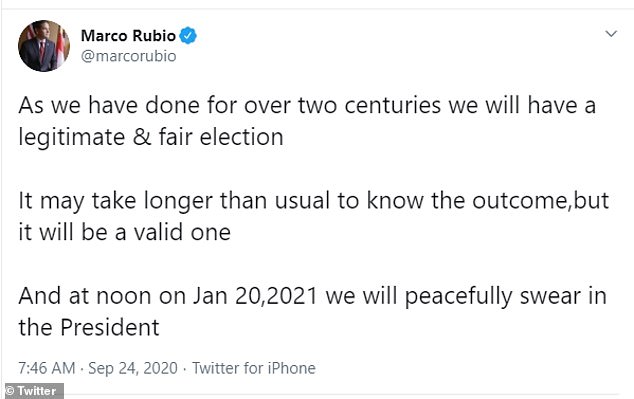 ‘It may take longer than usual to know the outcome,but it will be a valid one,’ he said in reference to mail-in ballots potentially holding up the results 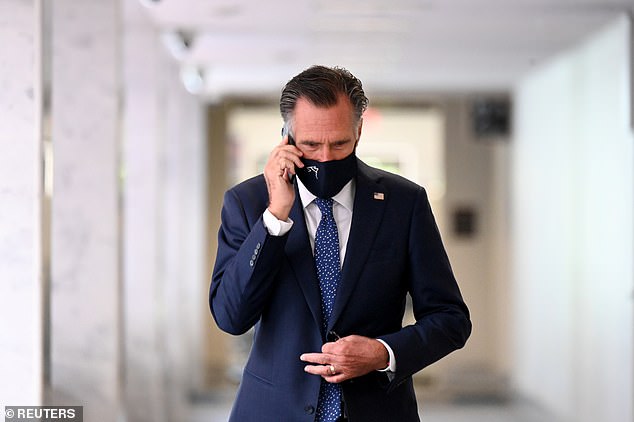 ‘Fundamental to democracy is the peaceful transition of power,’ he tweeted. ‘Any suggestion that a president might not respect this Constitutional guarantee is both unthinkable and unacceptable’ 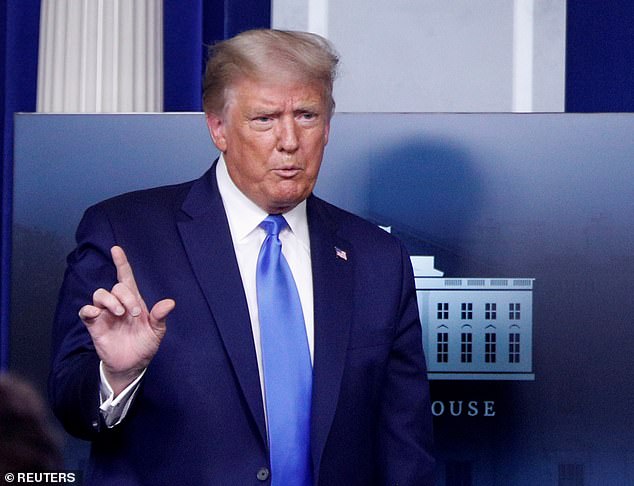 ‘Get rid of the ballots and you’ll have a very peaceful – there won’t be a transfer frankly, there’ll be a continuation,’ President Donald Trump said, in a likely reference to mail-in ballots

President Trump was asked during a press briefing Wednesday evening if he would commit to a peaceful transfer of power after the November election – and declined to do so.

‘Well, we’ll have to see what happens,’ said Trump, when pressed on the matter at the White House.

It was a similar comment to those he made in 2016 when asked similar questions.

Romney’s comments about the refusal came just days after he said he would agree to vote to confirm whomever Trump nomination to take the Supreme Court seat left vacant by Ruth Bader Ginsburg instead of waiting until after the election.

Many worried Romney’s criticism of the president – and the fact that he was the only Republican to indict the president on one article of impeachment – would lead him to defect from the rank and file of the Party.

After refusing to go along with a pledge to vacate the Oval Office if he loses the election, the president attacked Democrats Wednesday and delivered swipes that appeared to be directed at mail-in voting, the subject of his frequent attacks at the White House and at campaign rallies.

‘Win lose or draw in this election will you commit here today for a peaceful transferal of power after the election?’ Trump was asked at the top of his press briefing.

‘Well, we’ll have to see what happens,’ Trump replied – entertaining the question, but also refusing to commit.

His questioner pointed to ‘rioting’ in U.S. cities, and asked if Trump would commit to making sure there is a peaceful transfer of power after the election.

‘You know that. I’ve been complaining very strongly about the ballots. And the ballots are a disaster,’ he said, in a likely reference to mail-in ballots. Trump regularly says they are rife with fraud, although a handful of states use them for elections. 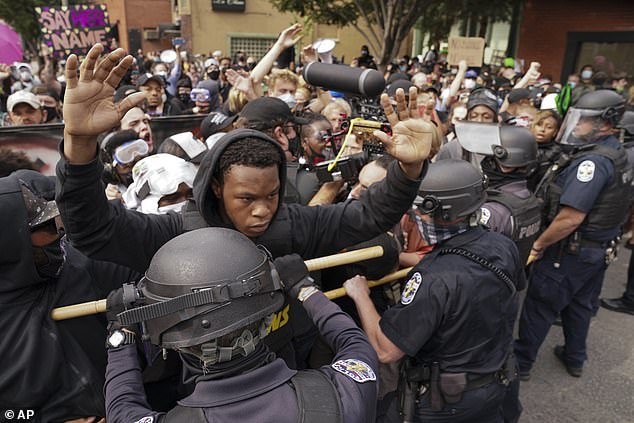 ‘Get rid of the ballots and you’ll have a very peaceful – there won’t be a transfer frankly, there’ll be a continuation,’ Trump said.

He continued: ‘The ballots are out of control. You know if. And you know who knows it better than anybody else, the Democrats,’ he said.

Trump’s refusal for a straight answer came the same day The Atlantic published an article titled ‘The Election that Could Break America,’ which played out scenarios where Trump would refuse to accept results amid court cases and recounts, and rejects the outcome even if rival Joe Biden appears to have won or be within sight of prevailing in the Electoral College.

Biden was at a loss for words when asked how he felt about the president’s comments.

‘What country are we in?’ the former vice president queried to reporters.

‘I’m being facetious,’ he clarified. ‘I said, what country are we in? Look, he says the most irrational things. I don’t know what to say.’

‘Get rid of the ballots and you’ll have a very peaceful – there won’t be a transfer frankly, there’ll be a continuation.’ – President Donald Trump

The president made the comment as some of his fiercest critics have accused him of making moves toward authoritarianism. Biden said this summer trump will ‘try to steal’ but said he is convinced the military ‘will escort him from the White House with great dispatch.’

The president faces the backdrop of ongoing investigations by prosecutors in New York that could implicate the president if he were to leave office.

On Wednesday, a New York judge ruled that Eric Trump must comply with a subpoena in a probe that extends to Trump Organization statements when obtaining financing for projects.

Trump concluded the briefing saying he had to take an ’emergency phone call’ and turned the podium over to coronavirus advisor Dr. Scott Atlas.