This was corruption on an industrial scale. Here were European Union freeloaders claiming vast expenses for conferences they had not attended and for flights they had never taken. Others were submitting false documents to secure fat contracts for friends.

And all of this would be paid for by the European taxpayer without a murmur — until, that is, a brave British official reported it all to his superiors.

Yet 20 years after bravely exposing this racket, Robert McCoy is still going round in circles as he fights for justice and for his good name — as he told a shocked European Parliament this week.

One sympathetic senior MEP remarked that it was like watching Groundhog Day. Another slammed the relentless ‘persecution’ of a lone individual by a vast publicly-funded institution. So why is this poor man still fighting? 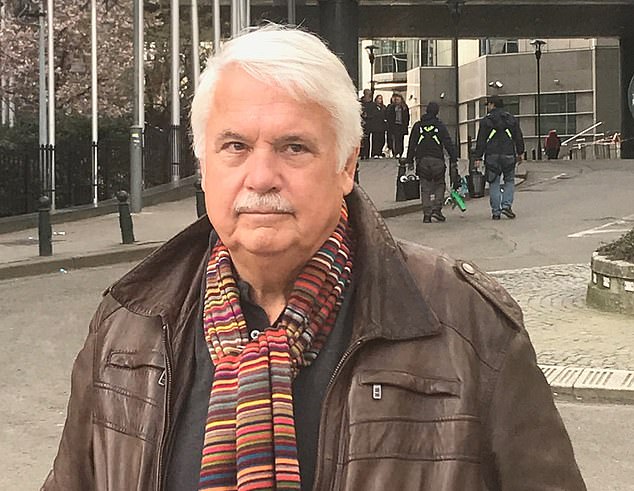 Whistleblower: Robert McCoy. The accountant is still going round in circles as he fights for justice and for his good name, 20 years after bravely exposing corruption at the heart of the EU

The story of Robert McCoy is a powerful riposte to all those primly painting Britain as the villain versus the saintly EU in the latest round of Brexit hardball. Yes, Boris Johnson’s critics have a point when they accuse Britain of ‘a breach of good faith’ with the Internal Markets Bill. Yes, it is mucky politics.

But let’s not kid ourselves. It is what the EU has been doing been for years. For a masterclass in duplicity and bad faith, look at the case of Robert McCoy.

This Wirral-born accountant is no Eurosceptic. He has always believed passionately in the European project and still lives in Brussels. Yet the EU behemoth has done its best to ruin his life and his good name for having the temerity to expose its dark side.

This is despite the fact that many eminent and honourable people in Brussels have rallied to his defence.

Indeed, Mr McCoy has had no less than three European Court of Justice rulings and ten European Parliament resolutions in his favour.

Yet the Brussels bureaucracy still refuses to face up to its wrongdoings — which is why Mr McCoy was this week appealing to one of the European Parliament’s most powerful bodies, the Committee on Budgetary Control.

He has also agreed to give me his first full newspaper interview in 20 years.

He starts by taking me back to 2000 and his days as a senior auditor within the Brussels hierarchy.

One day, a bill landed on his desk in Brussels from a well-known Belgian politician. It was a four-figure sum for expenses at a local government meeting in France’s Loire Valley.

A nice spot for a conference, certainly, but for eight days? ‘You just know when something doesn’t smell right,’ explains Mr McCoy. 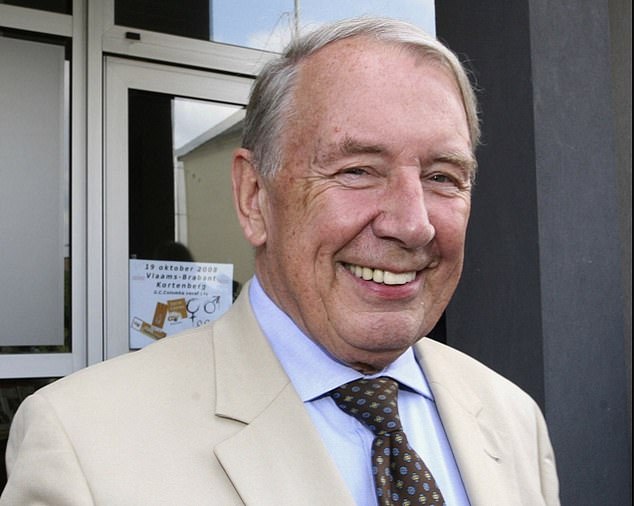 False claims: One of the worst offenders, Jos Chabert. There was a bill for a three-day meeting in the Canary Islands which had lasted less than one, and he even charged for an all-expenses paid jolly to London for an ‘official visit to Parliament’

So he did some digging.

Sure enough, the event had started on a Saturday and finished the next day. Yet, this politician had charged taxpayers thousands for six days of holiday.

Were this a one-off error, then Mr McCoy might have drawn a line under the matter. Except that this was no glitch.

Along came a bill from a French council leader who had chartered a private jet from his home in the south of France just to attend a single committee meeting in Brussels.

‘I managed to stop that payment,’ Mr McCoy recalls. ‘But it was indicative of the sense of entitlement.’

Robert McCoy had already spent most of his career working for European institutions. In 1999, he was promoted to financial controller of a new EU creation called the Committee of the Regions (CoR).

Its mission was — and is — to ‘bring the EU closer to its citizens’.

With an annual budget of £86 million, it is supposed to give the local councils of Europe a say in EU affairs. Critics call it another pointless Brussels gravy train. 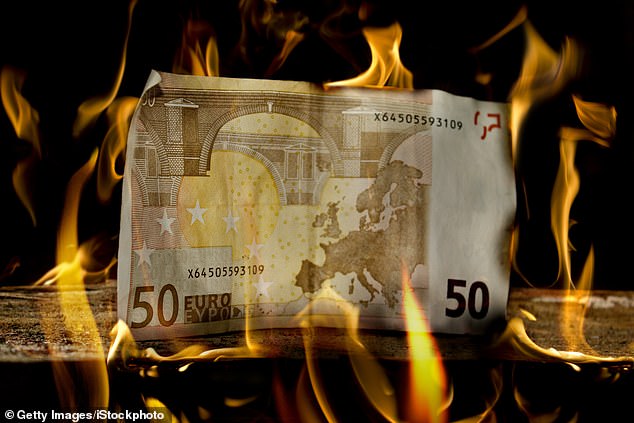 The Brussels bureaucracy still refuses to face up to its wrongdoings — which is why Mr McCoy was this week appealing to one of the European Parliament’s most powerful bodies, the Committee on Budgetary Control

McCoy soon discovered that things were out of control. He cites the example of an Italian politician called Giampiero Arci, a big cheese in Rome, who would regularly charge for Alitalia flights, despite never actually taking them.

‘This was a world I had no idea about,’ says McCoy.

One of the worst offenders was the president of the Committee of the Regions himself, Jos Chabert. A former Belgian Cabinet Minister and a city councillor in Brussels, he was a very creative traveller.

There was a bill for a three-day meeting in the Canary Islands which had lasted less than one.

He even charged for an all-expenses paid jolly to London for an ‘official visit to Parliament’.

It turned out to be dinner with former Tory peer, Lord Hanningfield, who was later imprisoned for fiddling his own expenses.

No such fate would befall Jos Chabert, of course. Like so many in Brussels, he regarded such claims as a perk of the job.

What is so telling about this case is not the historic pilfering (most of the culprits are dead or retired and there is no suggestion of any misconduct by today’s CoR members).

What is truly shocking is the way in which Robert McCoy is still having to fight for justice — a full twenty years later. It’s like a tale from the old Soviet Union.

When Mr McCoy tried to report his findings to senior management, he was threatened with disciplinary proceedings. Undeterred, he unearthed another scandal.

A Belgian company, bidding for an EU printing contract, was submitting fake bids from other companies in order to create a bogus tendering process and then secure the contract. ‘The civil servant in charge told me she knew they were fake but said she wasn’t aware that was wrong,’ says Mr McCoy.

Astonishingly, the contract was then signed off by a new president of the committee, on the advice of his officials. ‘I went to him and said, “We can’t carry on like this”, but nothing happened,’ says Mr McCoy.

So he turned to members of the European Parliament for help. One who remembers it well is Tory MP and Transport Minister, Chris Heaton-Harris. Back then, he was an MEP for the East Midlands. 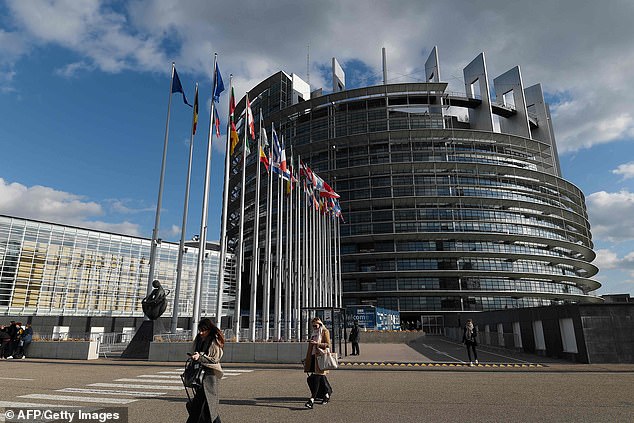 Indeed, Mr McCoy has had no less than three European Court of Justice rulings and ten European Parliament (building in Strasbourg, pictured) resolutions in his favour (file photo)

‘Robert was making this cry for help in front of some very hostile officials. It was an incredibly brave thing to do,’ he tells me.

‘It cost him his job and a large part of his life.’

Mr McCoy was being punished for whistleblowing. This was at a time when a certain European Commissioner, Neil Kinnock, was making a lot of noise about new protections for whistleblowers in the workplace.

It just didn’t seem to apply to those working inside the EU itself.

Mr McCoy went to the EU’s anti-fraud squad, OLAF, which produced an explosive 76-page report. It savaged all involved, accusing the committee of ‘shady dealings’ and an ‘endemic culture’ of malpractice.

It came firmly down in favour of Robert McCoy, charging the CoR with ‘destabilising the messenger of bad news.’ Despite these devastating charges, however, there would be no arrests or even sackings.

Rather than submit OLAF’s findings to the Belgian police, it was agreed that the errant politicians would merely repay some of the fiddled expenses while the CoR would ‘improve’ accounting procedures.

The bureaucracy had closed ranks. Astonishingly, many of the officials blasted in that report have since been promoted — except, of course, Robert McCoy.

Ostracised at work, he started to receive mystery phone calls at home. His health deteriorated. 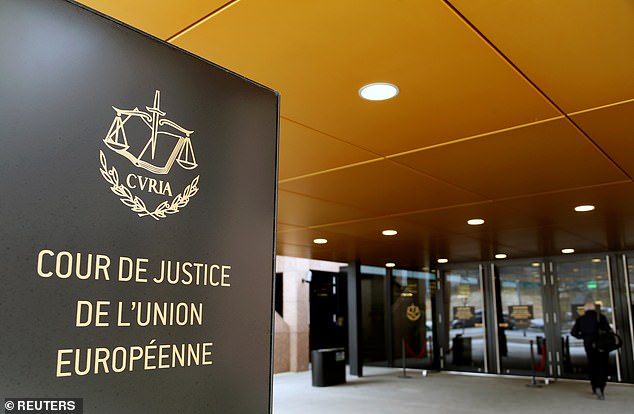 Despite three rulings from the European Court of Justice, this publicly-funded EU body still refuses to correct a gross miscarriage of justice after two decades (file photo)

In 2004, he was hospitalised after a complete nervous breakdown and says that when he did return to work, files had disappeared from his office. For the next three years, he was on extended sick leave until he was invalided out with a reduced pension on health grounds.

Mr McCoy wanted the full apology and the restitution of lost earnings which any bona fide whistleblower is entitled to expect. ‘They just hoped that I’d go away — or die,’ says Mr McCoy. But on he fought.

It was not until May last year that an EU medical tribunal finally and unanimously agreed that Mr McCoy’s illness had clearly been down to ‘harassment’ and ‘mobbing’ at work.

Yet, to this day, the CoR still refuses to concede defeat.

It has proposed a one-off payment which Mr McCoy has rejected on the grounds that it includes no apology and is nowhere near the settlement due to a bona fide whistleblower.

‘This is not about money. It’s about recognition that I did the right thing and should not have suffered for it,’ he says.

Yet, the Committee of the Regions still refuses to recognise its appalling behaviour. At this week’s Brussels hearing, the chairman of its financial committee, a Swedish mayor called Anders Knape, hilariously persisted with the line that there could have been ‘no basis for fraud’ all those years ago on the grounds that none of the expenses cheats was arrested at the time.

A spokesman for the CoR has even sent me a statement arguing that Mr McCoy cannot claim whistleblower status because the laws protecting whistleblowers had yet to be introduced when he was exposing this corruption. ‘Our legal advice is that it is not possible to apply these provisions retroactively,’ it says.

Pull the other one.

In the words of the distinguished Dutch MEP, Sophie in ’t Veld, who has now been appointed by the European Parliament to mediate on this matter, Mr McCoy was up against an institution that was ‘rotten to the core’.

But despite yet another roasting from the European Parliament this week, despite three rulings from the European Court of Justice, this publicly-funded EU body still refuses to correct a gross miscarriage of justice after two decades.

How can that happen?

Before the EU accuses anyone else of a ‘breach of good faith’, let it answer that first.