President Donald Trump’s 2020 reelection campaign was powered by a cellphone app that allowed staff to monitor the movements of his millions of supporters, and offered intimate access to their social networks.

The Official Trump 2020 app was a key tool in the election campaign used for fundraising and collecting location data, while encouraging more people to download it too by offering prizes such as signed MAGA hats and a photo with the president, according to the Wall Street Journal.

The app allows Trump’s team to communicate directly with the 2.8million people who have downloaded it – more than any other app in a US presidential campaign. If users giver permission they can share their entire contact list to the app.

Once installed, the app can track user behavior on the app and in the physical world, push out headlines, fundraise, sell MAGA merchandise and sync with mass texting operations, according to the app’s privacy policy and user interface.

It can also identify users who attend specific events or travel to a particular location with the app installed on their device.

President Donald Trump’s 2020 reelection campaign was powered by a cellphone app called ‘The Official Trump 2020’ that allowed staff to monitor the movements of his millions of supporters, and offered intimate access to their social networks 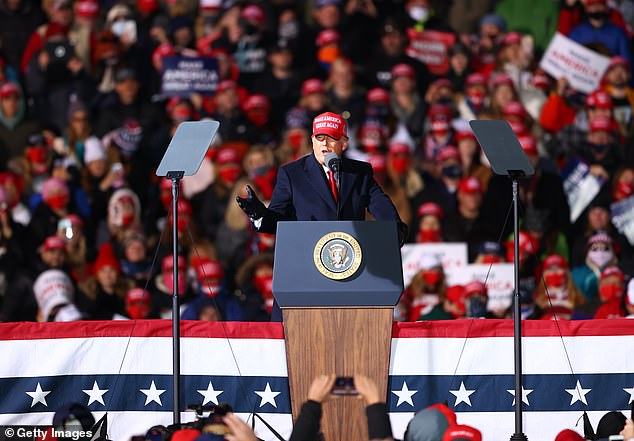 The app pushed out headlines, fundraised, sold MAGA merchandise and synced with mass texting operations among its 2.8million users. Trump pictured speaking during a MAGA rally on November 2 in Traverse City Michigan. The app could identify users who attended specific events or traveled to a particular location with the app installed on their device

The app is a powerful political venture that can call upon Trump’s base with the click of a button.

The app is made by enterprise software company Phunware Inc, based in Austin, and the business is in financial distress.

Despite its money troubles, the company has received key support from the Trump administration and campaign, according to interviews with former employees, financial filings and court documents.

Phunware Inc, whose stock is trading for pennies, recently agreed to pay Uber $4.5million as part of a settlement over claims of fraudulent advertising and earlier this year risked being delisted from the Nasdaq.

In April, the company got a $2.9million loan under the Coronavirus Aid, Relief and Economic Security Act as it was building the Trump campaign app.

Campaign watchdogs and former employees alike marvel at how a struggling startup known more for building apps for hospitals and a Manhattan-based astrologer became a juggernaut in Trump’s reelection bid, facilitating an ongoing data and fundraising effort that threw the company a financial lifeline.

Two views of the app above. The app allowed MAGA fans to upload videos of themselves and offered points for inviting friends onto the app. Those points could be used to cash in on prizes such as signed MAGA hats and photos with Donald Trump

While activity on the app slowed recently, the enriched data it gathered on Trump’s supporters, which can include everything from their contacts to their IP addresses to their locations, can serve many purposes going forward, said Adav Noti, a former Federal Election Commission attorney now with the nonpartisan Campaign Legal Center.

Congress and the FEC have not set rules governing how campaigns can use people’s personal data and or to whom the campaign can sell its lists, he added.

‘You can definitely buy the data and the campaign can sell it to you, the trickier question is how much do you have to pay for it,’ Noti said.

Joe Biden also had his own campaign app called Vote Joe which engages in some data collection such as information about its users’ contacts, but it is mostly used to organize volunteers and persuade people to support the Biden campaign, according to the Journal.

The Biden app has had about 83,000 downloads. Unlike Trump’s location collecting app, a Biden aide said the campaign saw no need to track where people are through the app.

Phunware declined to respond to questions about the app, the company’s financial status, its internal culture and its relationship to the campaign.

‘Phunware has absolutely no role in the constitutional processes tied to US elections at any level … and also has no role in the content created or used by our customers specific to our mobile software or enterprise cloud platform for mobile,’ CEO Alan Knitowski said in an email.

The app is created by Austin-based software company Phunware, which had financial troubles this year.  In April, the company got a $2.9million loan under the Coronavirus Aid, Relief and Economic Security Act as it was building the Trump campaign app 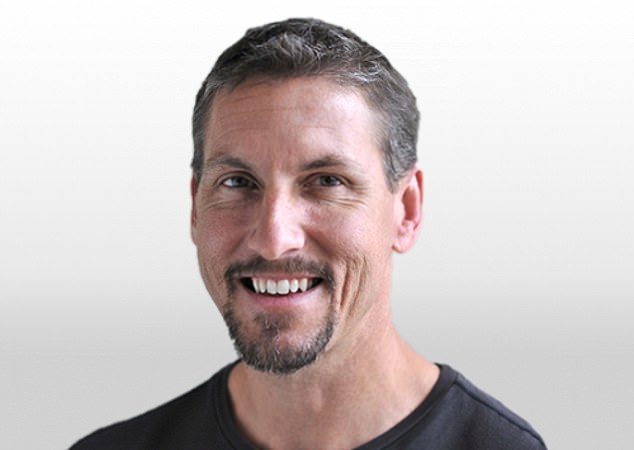 ‘Phunware has absolutely no role in the constitutional processes tied to US elections at any level … and also has no role in the content created or used by our customers specific to our mobile software or enterprise cloud platform for mobile,’ CEO Alan Knitowski said

The campaign declined to answer questions about possible future uses for the supporter data it collected via digital platforms, including the Phunware app.

‘The data is owned by the campaign and limited whatever hit their servers,’ a senior Trump campaign official who spoke on condition of anonymity to discuss campaign specifics said.

As Phunware has hit challenging financial times, it has shed employees, clients and investors, 10 of whom agreed to speak with The Associated Press, some on condition of anonymity because they signed non-disclosure agreements or feared retaliation.

Phunware sued its client Uber in 2017, accusing the ride-sharing company of failing to pay its fees, court records show.

‘I thought it had lots of implications for politics so in a subsequent conversation I mentioned it to Brad Parscale,’ Rove said. ‘He said “interesting” and that was it, he never told me he had hired them.’

Phunware CEO Knitowski said in an email that he built the relationship with the campaign.

‘Phunware met the Trump Campaign through me directly after a 1:1 introduction from a Silicon Valley CEO who requested our consideration and participation in an RFP that also had Salesforce as a finalist,’ Knitowski said.

By early 2019, after Phunware went public, former colleagues said Knitowski spoke of wanting to court the Trump campaign. In April, 15 percent of Phunware’s staff was laid off under ‘organizational restructuring and cost reductions,’ per a Securities and Exchange Commission filing.

In August, there was something new to announce: work with American Made Media Consultants, ‘otherwise known as the “Trump-Pence 2020” and “Keep America Great” Campaign,’ Knitowski said in an earnings call.

Phunware later revealed more deatils of its work on the Trump app.

It said it would include location-based tools and other features to help the campaign crowdsource new users. Plus, there would be a gamified loyalty system, where supporters could accumulate points to spend on prizes.

By September 2019, 18 percent of the remaining staff was laid off after client Fox Networks Group left, taking a large percentage of Phunware’s sales with them, according to filings. 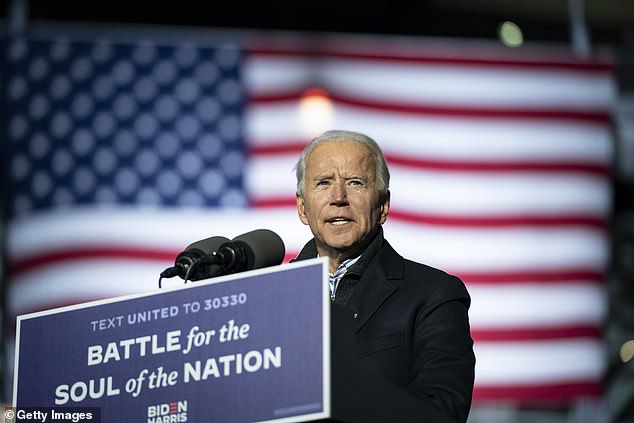 Joe Biden also had his own campaign app called Vote Joe which engages in some data collection such as information about its users’ contacts, but it is mostly used to organize volunteers and persuade people to support the Biden campaign

The next month, Nasdaq notified the company it could be delisted over its finances. To stay listed, firms must meet standards to reassure investors that since the initial public offering, they remain a credible company.

SEC records reveal that by July, American Made Media Consultants accounted for one-third of all Phunware’s sales, paying Phunware more than $1.6 million in the first half of 2020.

By mid-November the app hit 2.8million downloads, according to online data provider Apptopia.

That could give the campaign hundreds of millions of phone numbers, enabling it to reach people whose digits were stored in their friends’ contact lists but didn’t consent to being contacted, Apptopia’s CEO Eliran Sapir estimated.

A Carnegie Mellon University researcher, however, estimated the total would be near 27million due to duplicate phone numbers.

But by matching the accounting figures to past filings, AP derived that American Made Media Consultants is Phunware’s largest customer, and paid Phunware $2.4million over the first 9 months of 2020, accounting for nearly one-third of Phunware’s revenue.